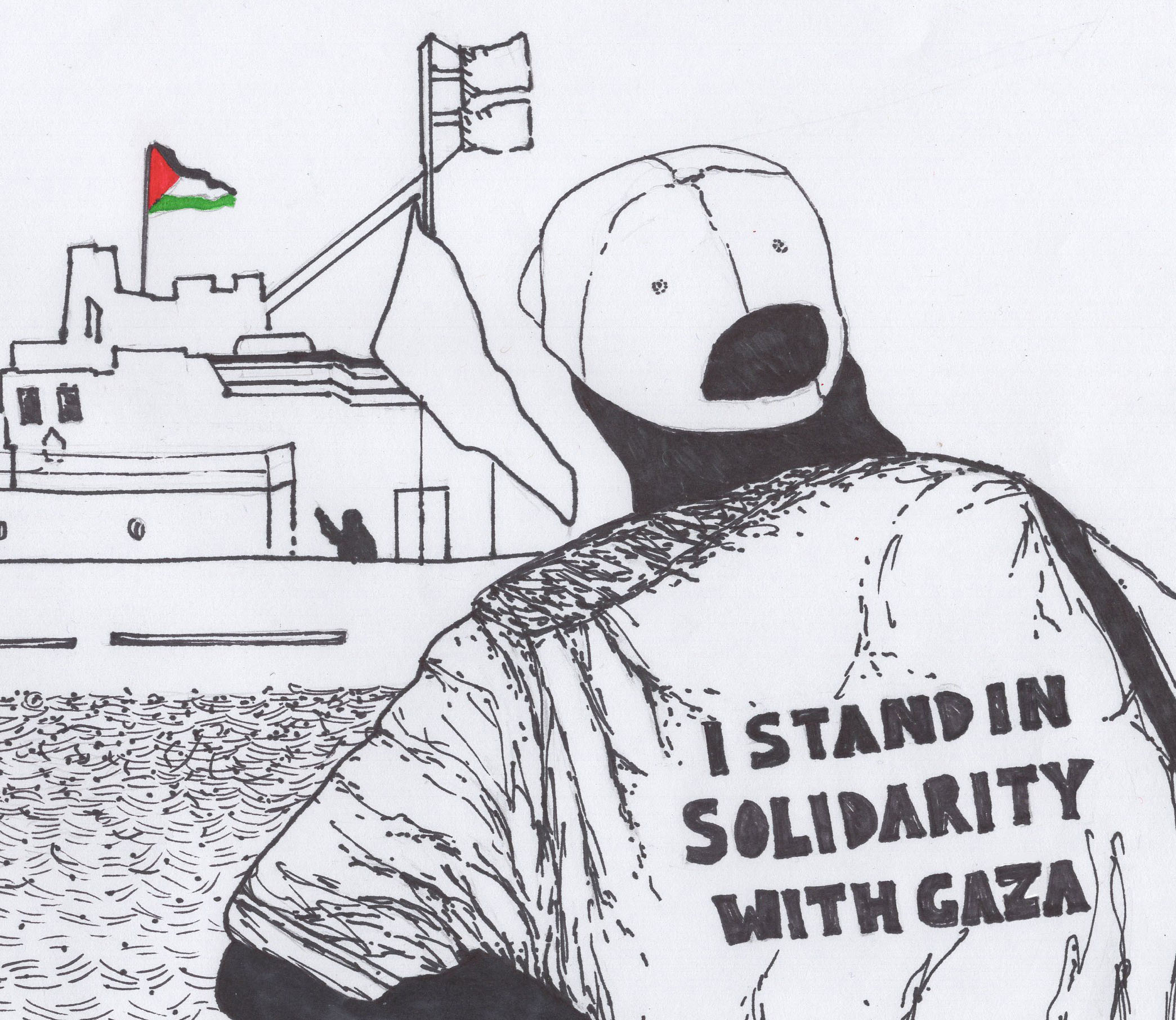 On February 20, McGill Students in Solidarity for Palestine Human Rights (SPHR) hosted David Heap, a community-based activist for peace and human rights, and media coordinator of the Freedom Flotilla Coalition (FFC), a self-described “grassroots people-to-people solidarity movement composed of campaigns and initiatives from all over the world working together to end the blockade of Gaza.” Heap discussed the important role the FFC plays in defying the illegal blockade of Gaza, detailing how the movement raises international solidarity with Gazans who experience the ongoing siege from the Israeli occupation. The FFC also provides a platform for international civil societies to mobilize and discuss the Gaza situation. Several missions organized by the FFC attempted to reach the shores of Gaza to distribute much-needed supplies to Gazan residents; however, all were either stopped or assaulted by the occupation’s navy.

Missions to break the siege did not begin with the FFC, but with the Free Gaza Movement. Heap clarified: “two voyages in [August and October] 2008 sailed to and from Gaza and brought medical supplies without any security risks, and without any harm to anyone.” But when the occupation’s military carried out operation “Cast Lead” from December 2008 to January 2009, Heap explained, “free Gaza voyages arriving during the operation came under attack, […] the navy began shooting and ramming boats, and it became very difficult and dangerous.”

The Israeli occupation is responsible for putting activists in danger, Heap stressed. “The only thing that makes [the voyages] difficult is the occupier’s violence.” This hostility is exemplified in the FCC’s first voyage in 2010, organized by the Free Gaza Movement and the Turkish Foundation for Human Rights and Freedoms and Humanitarian Relief (IHH). Of the six ships sailing to Gaza, “the largest, the Mavi Marmara, was attacked and boarded in international waters by the occupation’s commandos, killing nine activists and injuring several others,” stated Heap. The attack received extensive media attention generating an international public outcry, and caused the occupation to temporarily ease the blockade on Gaza.

Heap then described Israeli tactics to intercept humanitarian boats en route to Gaza. “Before we encountered the occupation’s navy, we lost contact with satellite radio […] the satellite phones all got blocked. This is in itself an admission of guilt, the occupiers are saying they’re about to do something they don’t want the world to see, so they have to cut off all channels of communication to control the narrative. They boarded with armed commandos, but we are committed to non-violent resistance. They are not committed to nonviolence.”

Heap was detained along with the other activists present onboard, spending six days in jail.
Heap explained that “typically flotilla participants are deported after 24 to 48 hours because it’s a media liability to keep [Western] internationals in prison.”

“Before we encountered the occupation’s navy, […] the satellite phones all got blocked. This is in itself an admission of guilt, the occupiers are saying they’re about to do something they don’t want the world to see.”

He also reminded the attendees that the “blockade itself remains illegal under international law […] the special Rapporteur for Human Rights in September 2011 said that there is no way the blockade of Gaza could be legal because it deprives a civilian population from the right of freedom of movement […] which is considered collective punishment under International Law and the Geneva Conventions, guaranteeing the freedom of movement for all people within their state.”

Heap then described the Estelle Flotilla in 2012 which stopped at various European ports, raising awareness in the cities. He explained, “we learned in that case about the importance of the pre-voyage. The last part of the voyage can be predictable when we’re intercepted by the occupier’s navy. When we meet people in a European communities we have an impact on that community.”

An alternative tactic to the flotillas was the Gaza’s Ark campaign from 2012-2015, which sought to challenge the blockade from the inside out. Heap explained, “Gaza’s Ark was a project to sail from inside Gaza out, to emphasize the fact that it’s not about us bringing stuff to Gaza, it’s about freedom of movement for Palestinians in Gaza.” Heap and his colleagues would “rebuild a fishing boat in Gaza, buy trade goods from Palestinians who wanted to trade with the world, and sail out to challenge the blockade. [We were] demanding freedom of movement and freedom of commerce […] and the project sold about $25,000 worth of export goods.”

The Gaza’s Ark campaign addressed the plight of Gaza’s fishermen, who “since 2012 and in fact earlier, suffered from the occupier pushing back the very narrow band of waters where Palestinians are allowed to fish. Sometimes it’s six nautical miles, sometimes it’s as little as four nautical miles. Keep in mind that any other coastal people in the world has a minimum of 12 nautical miles of territorial waters and normally a 20 nautical mile economic zone.” Heap stated “many end up in the occupation’s prisons for the crime of fishing. For the crime of trying to feed their families.”

Heap went on to express his support for the Women’s Flotilla which sailed in 2016 that “underlined the aspects of the blockade which particularly affect women […] and the role women play in the resistance and the survival of their societies.”

George Ghabrial, a member of SPHR, said “it’s important to remind the McGill community at large that [the struggle for Palestinian liberation] is bigger than just McGill or a campus. We have a room full of people who are relatively aware of the issue today thinking about the occupation of Gaza. It inspires people to think a little bit differently and maybe empowers them to take action in different ways they hadn’t done so before in their communities and in that way spread more internationally.”

Regarding future flotilla plans, Heap stated that “this year, we’re planning a sail called ‘A Just Future for Palestine’ and the flotilla will be called ‘Al Awdah’ [The Return] with representatives from all over Europe, Malaysia, New Zealand, Canada and the United States as well as several [representatives from] international organizations. We need to continue to spread the international nature of this. The purpose is to break the media blockade and to reach people with the story of what’s happening in Gaza.”

“It inspires people to think a little bit differently and maybe empowers them to take action in different ways […] and in that way spread more internationally.”