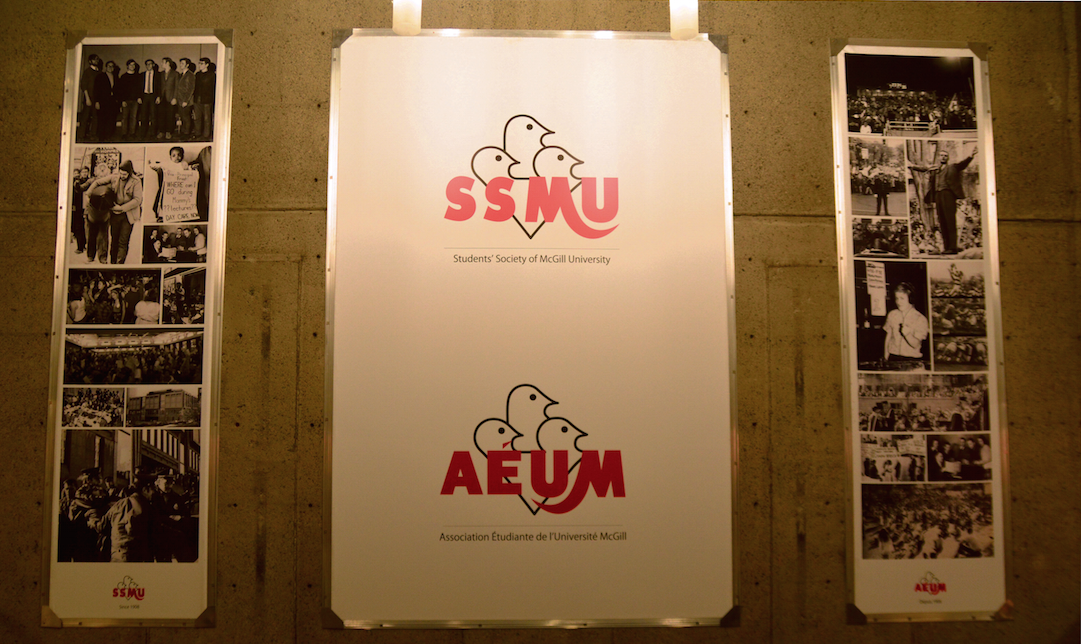 On January 25, the SSMU Legislative Council convened to discuss motions and address a range of topics. The council first heard a presentation by Sustainability Director Francois Miller and Communications Officer Toby Davinee from the McGill Office of Sustainability (MOOS).

Councillors then discussed the Faculty of Dentistry’s response to the sexual assault allegations made by a student towards a faculty member. Three motions were passed, including a rescheduling of the Winter 2018 General Assembly and nominations to the SSMU Board of Directors (BoD). The motion to endorse the SSMU Survivor Bill of Rights, headed by VP External Connor Spencer, was passed unanimously.

The bill to endorse SSMU’s Survivor Bill of Rights articulated survivors’ rights in the “immediate aftermath of an instance of sexual violence,” “during the process of disclosure,” and “in seeking accommodations within their communities and institutions.” The amendment to the fourth clause was put in place in order to specify the accountability of the Legislative Council and individual councillors in “advocating for the rights enclosed in this bill within their associations and larger student and McGill communities.”

During question period, councillors discussed the sexual assault allegations made against a member of the Dentistry faculty by a former student, reported by CBC in December 2017. The incident in question occurred on November 2016, and was reported to the Service de Police de la Ville de Montréal (SPVM) the following day. A complaint made to the faculty of Dentistry yielded no clear results following an investigation conducted by the dean.

The incident in question occurred on November 2016, and was reported to the Service de Police de la Ville de Montréal (SPVM) the following day. A complaint made to the faculty of Dentistry yielded no clear results following an investigation conducted by the dean.

When asked what steps the Dentistry Student Society (DSS) has taken, or is planning to take, in support of students regarding “sexual violence, academic harassment and intimidation,” Councillor Ryan Siciliano read a statement prepared by the President of the McGill Dentistry Graduate Student Society (MDGSS), Ninoska Enriquez, which stated that the society “takes very seriously reports of harassment or violence against any member of the university.”

“Above all, students have access to the UGME [Undergraduate Medical Education and Dentistry] and WELL [Wellness Enhanced Lifelong Learning] office which is an excellent third-party system to report mistreatment safely, rapidly, and with anonymous action,” said Siciliano. According to CBC’s coverage of the incident, the faculty member accused of the assault has been allowed to return to work, under conditions unknown to the victim.

The MDGSS’s statement emphasized a close community between student groups and faculty members: “We [MDGSS] are a very unique faculty in the sense that we spend at times 12 hours a day seven days a week with each other, so I know students very, very well.”

The faculty member accused of the assault has been allowed to return to work, under conditions unknown to the victim.

The statement then read, “We as the DSS and me, as the President […] don’t feel that we have a fear of harassment or something more systemic than these allegations made by the two individuals … This is simply not representative of dental students at the moment. Students have a very strong and active relationship with faculty members and feel like we have adequate outlets if any inappropriate situations should arise.”
However, in contrast to the statement, the university-appointed harassment assessor, Adrienne Piggott, reported the existence of harmful systemic problems, including “management and governance issues.” In response, McGill Provost Christopher Manfredi agreed to work with the dean to address the systemic issues.

Siciliano mentioned that that the Dentistry faculty, the Order of Dentists in Quebec, and the police were investigating the situation, and that “the Dental Student Society was happy with the way that [the investigation] was being conducted.” The report made to the faculty is still currently under investigation, well after a year of filing the complaint.

When asked by VP Connor Spencer and faculty of Medicine representative Councillor André Lametti about what further actions would be taken not for the majority but for individuals feeling unsafe, Siciliano responded that “we [DSS] are satisfied with the outlets that are currently being explored and we won’t be taking any further action regarding the current allegations.”

The council heard speakers Miller and Davine present long-term and short-term goals of the Vision 2020 Climate and Sustainability Action Plan. The lan includes twenty-two short-term targets to be achieved by 2020 and two long-term targets: first to achieve carbon neutrality by 2040 and second, for McGill to attain a platinum sustainability rating by 2030. The plan, which started consultations in fall 2016, was approved in December 2017.

Miller explained that the approach to carbon neutrality was through the three pillars of priority; reduction, carbon sequestration, and carbon off-setting. To reach the platinum sustainability rating the MOOS will be using the Sustainability Tracking, Assessment, & Rating System (STARS), which is a “self-reporting framework for colleges and universities to measure their sustainability performance.” Given that the STARS measurement is based on self-reported surveys, VP External Connor Spencer and Councillor Vivian Campbell asked Miller and Davine how McGill would be accountable toward their targets if MOOS were to self-report their own progress.

Miller responded that “just in terms of accountability, one of the measures that we did [in regards] to the Board of Governors is a series of key performance indicators […] We’ve [also] headed three sustainability key performance educators so the Board will be also informed on a yearly basis on the progress that the university is making towards these long-term targets.”

We’ve […] headed three sustainability key performance educators so the Board will be also informed on a yearly basis on the progress that the university is making towards these long-term targets.”

When asked by Councillor Campbell about the accountability of smaller groups affiliated with McGill, Davine responded that although decentralization of the campus makes complete transparency difficult, there is a sustainable-labs working group, for wet-labs in particular, to manage sustainability.

A motion was presented by Spencer to move the Winter 2018 G.A. to March 26, 2018 after the SSMU elections was passed. Spencer mentioned that the new date would “ensure that the new executive is accountable to the goals that they … were elected upon; that they then would have to work with the current executive” to work on how to efficiently achieve goals in place, and to have the members prioritize as a group those goals.

A motion concerning nominations to the SSMU Board of Directors was passed unanimously, making Connor Spencer the fourth Officer to sit on the BoD. The motion was prompted by the inability for Esteban Herpin, the newly elected VP Finance to sit on the BoD as he is neither a Canadian citizen nor a permanent resident. Herpin stated that although he will not be able to sit on the BoD, he still plans to “begin working with the Funding Commissioner and Funding Committee closely to see what [they] can do to improve funding for, not only SSMU clubs but other initiatives around campus and make those more accessible” and to also “make students more aware that this funding exists.” Herpin stated: “my main priority for this semester will mainly be to get a budget report presented to Legislative Council.”