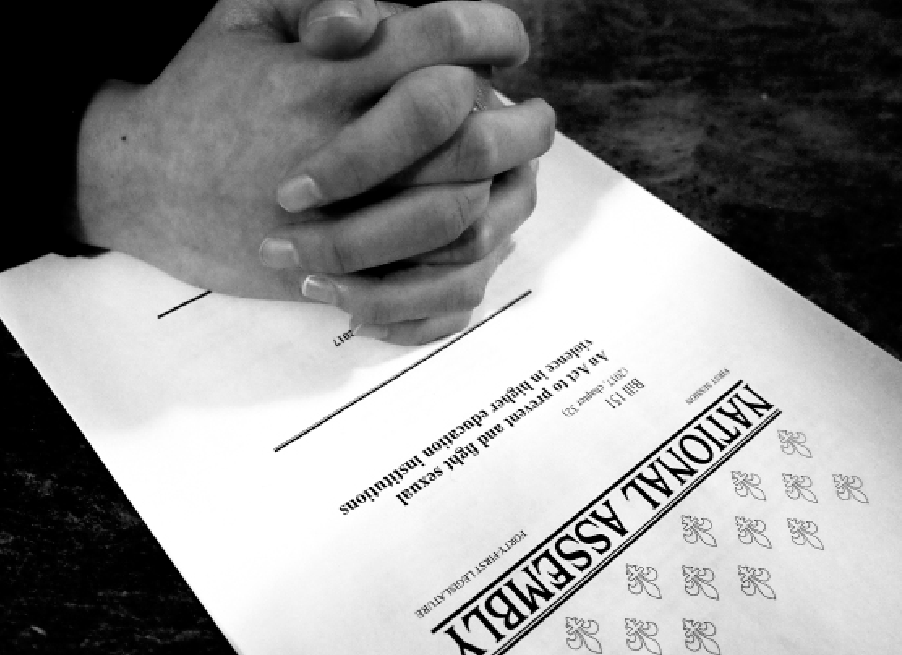 On December 8, 2017, Bill 151, an act aimed to prevent and fight sexual violence in higher education institutions, unanimously passed in the Quebec General Assembly. The bill was developed in consultation with various groups, including the Student’s Society of McGill University (SSMU), the Association for the Voice of Education in Quebec (AVEQ), and Our Turn, who presented their thoughts on the proposed bill to the Commission on Culture and Education at the National Assembly on November 21. Under the bill, all education institutions in Quebec, including CEGEPs, must propose a policy addressing how to approach cases of sexual assault, including student-teacher relationships. At minimum, the policy requires the dean or another higher authority to be notified of any sexual relation between “students and persons having an influence over their academic progress.” The policies must be put forth by September 1, 2019.

At minimum, the policy requires the dean or another higher authority to be notified of any sexual relation between “students and persons having an influence over their academic progress.”

While the bill was drafted in consultation with various local community groups including organizations representing survivors, not all recommendations were taken to secure the rights of the survivor. This prompted SSMU VP External Connor Spencer, Coordinator of mobilization for AVEQ Kristen Perry, and Co-Founder and National Chair of Our Turn (a national campaign addressing campus sexual violence) Caitlin Salvino, to draft the open-letter criticising the content of the bill. The letter was signed by over 300 students and twenty organizations, including McGill’s sexual assault support group, the Sexual Assault Centre of the McGill Students Society (SACOMSS). The letter was also signed independently by members of the McGill Daily editorial board. The letter outlines recommendations for the Bill, which include “A Defined Stand-Alone Sexual Violence Policy;” an approach which would discontinue processing sexual assault cases through the Student Code of Conduct.

Additionally, the letter suggests the introduction of “rape shield protections” to protect the privacy of the survivor’s sexual history, student representation of 30% on committees, as well as the students being made aware of sanctions put into place for their case. Measures to ensure reasonable and defined timelines were recommended, such as a complaint process which does not exceed 45 days, and accommodations for survivors to be arranged within 48 hours of sending the complaint.

The letter also goes on to stipulate that the government must create an “independent oversight body,” which would serve to listen to individual complaints put forth on the violation of their safety and/or rights by the institution. “There seems to be a lack of understanding from the commission on how wary students are to trust their administrations to be the one enforcing the standards for the policy, or that they would properly consult their students during the creation of a policy,” said Spencer in an email to The Daily. The letter emphasizes that the process for students coming forward about sexual assault “must include the ability for the Minister to hear the concerns of students and then place requirements and/or sanctions on specific institutions for failing to adequately respond to sexual violence on their campus.”

“There seems to be a lack of understanding from the commission on how wary students are to trust their administrations to be the one enforcing the standards for the policy, or that they would properly consult their students during the creation of a policy.”

In her email, Spencer highlighted the necessity of involving external third parties to review the cases, such as an independent oversight body, especially when dealing with cases involving “faculty or persons in relative positions of power on campus,” a suggestion also found in the letter. As of now, McGill does not forthrightly condemn student-teacher relationships. On McGill’s webpage of Conflicts of Interest under Student Rights and Responsibilities, McGill writes that the “staff member or teaching assistant shall decline or terminate a supervisory or evaluative role with respect to the student,” but that “alternative arrangements for supervision and evaluation shall be made in confidence and shall not prejudice the status of the student, staff member, or teaching assistant.”

Spencer told The Daily that according to Quebec law, the administrators of the sexual assault case are “unable to tell the survivor what the result of an inquiry was or what sanctions if any were put in place for confidentiality reasons”. Spencer mentioned that the survivor ultimately does not know if the “case was treated fairly or if they are safe from this person on campus”.

Bill 151 does not aim to ban these sexual relationships between students and teachers. Instead, it aims to delineate more specific and concrete approaches to processing accounts of sexual assault. Associate provost of McGill, Angela Campbell, wrote in a statement that “the definition of consent in the policy against sexual violence states that consent cannot occur ‘where the sexual activity has been induced by conduct that constitutes an abuse of a relationship of trust, power or authority, such as the relationship between a professor and their student.’” Section 4.1 of Bill 151, which defines the concept of consent, is the only mention of student-professor relationships in the policy. The approach of processing accounts of sexual assault when it involves a student-teacher relationship are only one of the elements Bill 151 fails to address in great depth.

“The definition of consent in the policy against sexual violence states that consent cannot occur ‘where the sexual activity has been induced by conduct that constitutes an abuse of a relationship of trust, power or authority, such as the relationship between a professor and their student.’”

Sophia Sahrane, the Research and Education Coordinator of AVEQ, says that two of AVEQ’s main issues with Bill 151 include the suggestion of police as an external resource under Chapter II, Art. V of Bill 151 as well as the complete disregard for the diversity of sexual assault experiences based on gender, race, ethnicity, sexual orientation, and disability.

On the issue of police intervention Sahrane stated, “we [AVEQ] believe that police have no place in university” and that the “policing of already marginalized bodies” should indicate the ineffectiveness of using police as an instrument to aid sexual assault survivors. Groups such as Concordia University’s Sexual Assault Resource Centre (SARC) and Le Regroupement Québécois des Centres d’aide (RQCALCS) accompany students to the police; however, although it is important to spread support for sexual assault survivors beyond the scope of their institution, Sahrane reiterates that “not everyone has the privilege of trusting the police.” In a press release by AVEQ, Sophia Sahrane writes that “as long as there is racism, sexism, homophobia, transphobia, and mistreatment of the Quebec population and Indigenous people by the police, AVEQ opposes the active participation of the police force in preventing and fighting sexual violence in our universities.”

Before the passing of the bill, consultations with larger groups such as SSMU and AVEQ were held, yet groups representing the voices of marginalized peoples and minority groups were not included in the discussion.

Another element disadvantaging students, especially those attending educational institutions affiliated with the University of Quebec system, is the lack of adequate funding for sexual assault support groups and programs. For example, at l’ Université du Québec à Chicoutimi, there is only one social worker for the whole university because the administration did not replace the only other staff member on leave. This instance of a gross understaffing of professionals with proper training to fully support survivors is not a rare one in Quebec educational institutions. Sophia Sahrane emphasized that this inadequate level of funding necessitates the existence of a “minimum of resources all across the universities in Quebec that must be offered to students”.

Sahrane told the Daily, “the Bill presented sexual violence as a very singular, non-dimensional issue, which it’s not.”

“The Bill presented sexual violence as a very singular, non-dimensional issue, which it’s not.”