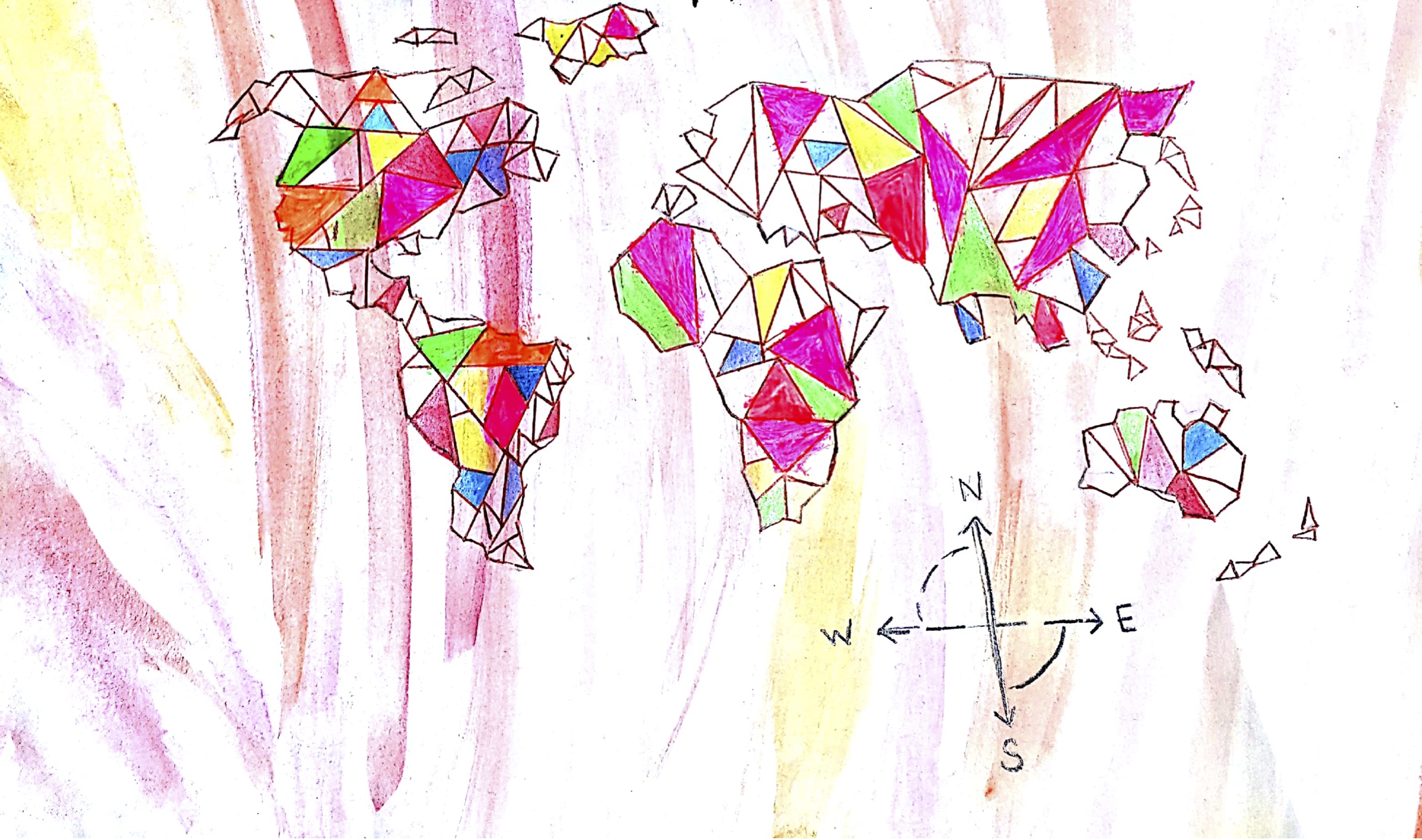 A world map allows participants to mark an area of their choice to document an experience they’ve had as part of Montreal’s queer community by inserting a pink satellite. The project, titled “Queering the Map,” was created by Lucas LaRochelle, a Bachelor of Fine Arts student at Concordia University. To describe the piece in LaRochelle’s own words, it is a “community-generated mapping project that geo-locates queer moments, memories and histories.” The piece bridges the physical and the digital, existing online and in print as a collection of the website’s data (www.queeringthemap.com), which constitutes a map that allows you to pin hot pink location bubbles at places you have experienced as “queer,” and to leave a note sharing a story or expressing a sentiment. Any place of significance to one’s queerness qualifies.

The piece in LaRochelle’s words […] is a “community-generated mapping project that geo-locates queer moments, memories and histories.”

Queerness, for that matter, falls anywhere on the sexuality or gender spectrum, and it is up to the contributors to curate the experiences worth publishing. Posts range from bittersweet memories of romantic escapades to tear-jerking coming-out stories from the ’60s, though the occasional (graphic) disclosure of where people have lost their virginity also crops up — for example, “I sucked my first dick here, while my dad mowed the lawn outside. Summer of ‘03.” Posting is anonymous, which perhaps invites potential oversharing. Some stories are NSFW(not safe for work, explicit), though LaRochelle is adamant that such content is a core part of queer culture, and that as such, it has a rightful place on the website. They are not wrong. The project is a public celebration of queerness aiming to increase the community’s visibility by giving its members a voice, and sex has always been integral to the community’s culture, from bathhouse sex to Grindr debauchery. Using the vehicle of communal sharing, “Queering The Map” presents a platform for the local LGBTQ+ community to feel united and heard.

The word ‘queer’ in the title of the project “Queering The Map” is cheekily employed as a verb that stands for claiming queer space. Constructed this way, it suggests spreading and dissemination of queerness in space, but also, a viral spreading, a contamination. Turning “queer” into a verb reappropriates the threatening power of “queerness,” putting it in the hands of queer people themselves.

“Queering The Map” expands on the community’s complicated relationship to public space. A space of violence and rejection, it is also known as a sexualised place, especially for gay men.

The project is a political statement in the guise of a love affair. The affair is one between people and places: a universal fondness for and connection to the settings that shape our memories. Attachments to places happen regardless of one’s sexuality. What makes “Queering The Map” political, then, is that by “claiming” spaces on the digital map, the LGBTQ+ community expresses its queerness in a public manner. It constitutes a coming out, but instead of coming out of a closet, people are out on the streets, or at least in cyber space. “Queering The Map” expands on the community’s complicated relationship to public space. A space of violence and rejection. Nevertheless, some parts of it have also been known as a sexualised, especially to gay men. The ownership of space by queer people has therefore been predominantly masculine, and, in that framework, the project proposes a more inclusive ownership of space by its format, its fluid membership and qualifications to add an entry. In this sense, one could say that “Queering the Map” is an online adaptation of a Pride Parade. With sufficient exposure, it could be as impactful as a march.

As a mapping project that asserts the presence of one community over others, “Queering the Map” has to contend with its own colonial implications, especially in the context of North America. LaRochelle says they are aware of the efforts required to “avoid reifying colonial practice,” and they shared that “the question of what a queer spatial politics that is investing in decolonization looks like is one of the primary concerns of this project.” Their goal with the framing of “Queering the Map” is to succeed in making it “coalitional with Indigenous land politics.” The decision for it to be on a digital platform rather than existing in the physical environment is one way in which this is tackled.

“Queering The Map” expands on the community’s complicated relationship to public space. A space of violence and rejection, it is also known as a sexualised place, especially for gay men.

The reminiscent entries document a queer history written by the community, though not necessarily for it. Anyone can get lost reading here; the range of styles, length, content and locations is exciting aesthetically, and its breadth is captivating. Space has already been ‘queered’ on 6 continents (Antarctica, you’re next!), which also means that the project is growing with haste. Since it is local to Montrealers, however, it currently looks like it is becoming a travel journal for Canadians to use to share their queer experiences abroad.

The content is unfiltered and unmonitored in the sense that it evolves organically, though LaRochelle reserves the right to delete offensive posts. They did not seem easily offended, though. When I asked them if they were worried about launching the website and giving control over to the public, they coolly responded that that had been the plan from the beginning. “Participatory work interests me. If anything, I put my energy into becoming a facilitator for the project. I see it as something that I created the conditions for, rather than something I ‘designed.’”

When I asked them if they were worried about launching the website and giving control over to the public, they coolly responded that that had been the plan from the beginning. “Participatory work interests me. If anything, I put my energy into becoming a facilitator for the project. I see it as something that I created the conditions for, rather than something I ‘designed.’”

During the vernissage, I also got to chat to LaRochelle about what inspired them to create “Queering the Map,” which they also discuss in the foreword of the book. As it happens, all it took for the idea to emerge was an emotional event now pinned on their map. They recalled the moment, saying “I was biking home one day when I passed by a tree where I’d met one of my first partners. There was an intense feeling that I recognized in biking there; a feeling of queerness coming from action. In that sense, I became interested in capturing the feeling of queerness in relation to specific environments, and to then map them out.”
“Queering the Map” is LaRochelle’s Residency Project at the Concordia Fine Arts Reading Room, which they took up in Fall 2017. They are currently finishing their BFA in Design and Computation Arts. Their minor in Sexuality studies has informed recent projects such as “Queering the Map.” LaRochelle and their collaborator Tess Kuramoto are now working on developing a speculative wearable/installation project, that gathers participants bio-data and uses it to animate a series of post-human sculptures.