Survival of the generous

An alternative look at evolution and competition 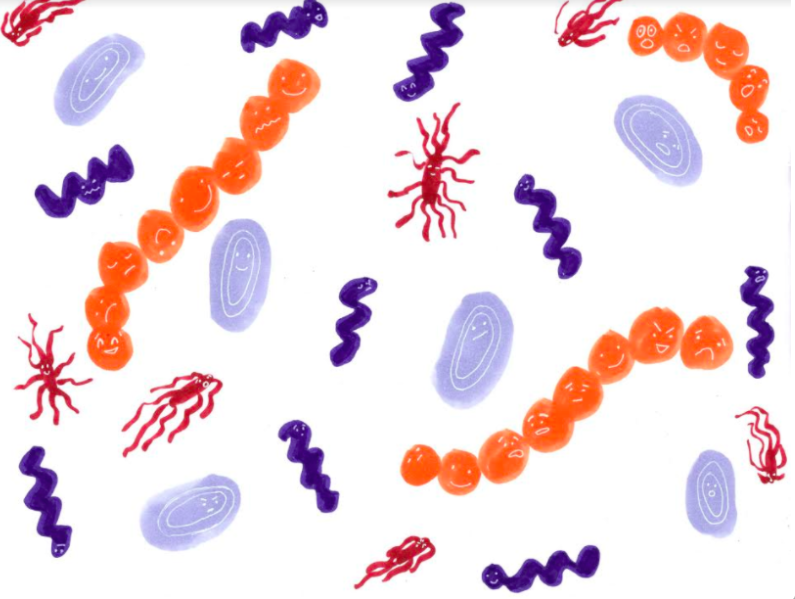 Bacteria are microscopic, single-celled organisms. Most bacteria have one large circular chromosome inside of them, and many other smaller circular pieces of DNA called plasmids. The DNA contained within these plasmids encode for the expression of proteins that are not essential to the growth of bacteria. However, they often provide an advantage to the bacteria, helping them to overcome obstacles in the environment, such as the ability to metabolize a different source of food or to synthesize a membrane protein that allows it to resist antibiotics. Bacteria can acquire and exchange these plasmids in many different ways, such as uptake from the environment or, more compellingly, through a process called bacterial conjugation.

Bacterial conjugation occurs when a donor cell bacterium that has a certain plasmid extends a long “arm” called a pilus. In doing so, the bacterium is able to find another bacterium that does not have that specific plasmid, making it the recipient. Once the donor finds the recipient, it replicates its own plasmid so the recipient can have a copy of it as well, hopefully giving it an advantage that allows it to overcome an environmental challenge.

Many people would, incorrectly, consider this a form of bacterial sex. Scientifically, this is untrue, because this process does not result in the production of a daughter cell (The Daily recognizes that sex does not necessarily result in a child in humans – however, this is the definition that is used for microorganisms). This process can be thought of more as a bacterium sharing critical information with its good friend, to help said friend lead a more successful life. An analogy that comes to mind is one person teaching their friend how to swim. It is easy to get through “everyday life” without needing to swim, however, if this person was ever in a shipwreck, the actions of their friend will have single-handedly saved their life.

What’s interesting about this entire process is that there seems to be no obvious benefit to the donor cell. Despite this, the donor expends significant energy in searching for a recipient and in copying its DNA, potentially putting itself at a disadvantage. So why do bacteria do this? Well – bacteria have been on earth for a very long time. For about three billion years, most organisms were microscopic, and bacteria and archaea (another type of microscopic organism) were the dominant forms of life. So, bacteria have been exchanging genetic information with each other for a very long time, leading us to assume there is a logical explanation for the process. And yet, conjugation seems to benefit only the recipient.

Evolution over time is understood by most biologists as the “survival of the fittest.” This can often be interpreted as, ultimately, every organism is looking out for itself, and must compete with everything else in its environment in order to survive. However, in my opinion, the existence of bacterial conjugation demonstrates otherwise. When a bacterium donates its genetic information to another bacterium, the recipient of this selfless act will have the same advantages as the donor. Furthermore, this recipient bacterium will likely go on to donate the copied plasmid to even more bacteria.

This suggests the theory of evolution isn’t so black and white. Perhaps bacteria have been such successful organisms on this planet in almost every environment for so long, not only because they are competitive, but also because they are generous. In times of trouble, they reach out to each other and give each other information that is sometimes critical to survival. Maybe, we could learn something from bacteria. Throughout my entire life I have been taught that in order to succeed I must compete with others. I must be better than others, even if that means leaving others behind in the dust. In competitive environments such as McGill, I do not think my experience is unique. However, I do not think that competition is imperative to success. Despite all that has been said about survival of the fittest, generosity has still proliferated throughout millions of years. Maybe, competition isn’t imperative to progress; instead, in order to better ourselves, we must give to others. Perhaps there is something innate about generosity. If bacteria can look out for each other, so can we.