North Korean activists must be empowered, not victimized 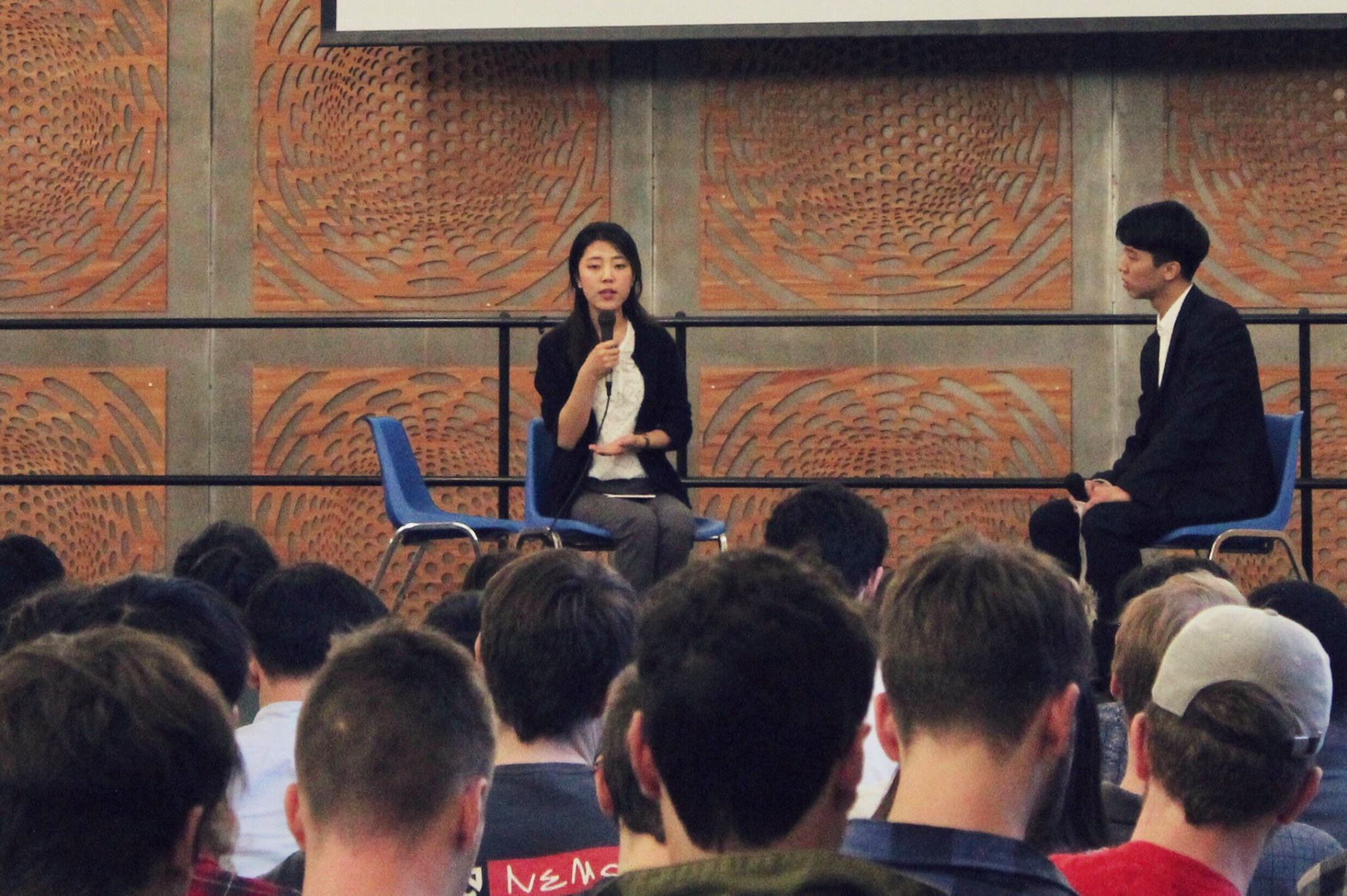 On October 28, McGill Students for Hanvoice hosted a panel called “What would you ask a North Korean.” The panel was attended by over 200 people, and featured Ellie Cha, a human rights advocate who left North Korea with her family in 2012. McGill Students for HanVoice is a non-profit grassroots organization created to raise awareness on the North Korean humanitarian crisis. The event was part of the HanVoice Pioneers Project (HPP), an initiative which aims to empower North Korean activists to lead the North Korean human rights movement. The event included an introduction by Dr. Juan Wang of the McGill Political Science department. Later, Cha shared a testimony on her life experiences followed by a Q&A session with the participants.

Danny Yeo, the president of HanVoice Ottawa, spoke on the challenges resettlement poses to many North Koreans, specifically, the difficulty of working around the immigration regulations of surrounding countries.

“When North Korean refugees […] defect from North Korea, their goal is to get to Thailand. […] It’s known as a safe haven, and more than 90 per cent of refugees end up there,” said Yeo, “In China, if they get caught, they will be deported back to North Korea.”

Throughout the migration process, refugees face the risk of deportation back to North Korea. The North Korean government considers unauthorized departure a criminal offense, meaning that returning to North Korea leads to prosecution. Many choose to cross the eastern border out of the country, using a paid broker for travel arrangements. This route involves travelling through China, where North Korean refugees are considered economic migrants instead of asylum seekers.

Yeo explained that North Korean citizens face limited options after leaving the country. “Another problem is that when they arrive [in] Thailand, they only have two options; South Korea [or] the US,” said Yeo. “Currently, the US is not the best place to go, because of the […] administration. […] The process is very long, whereas South Korea is very quick.”

“In South Korea, there is another problem. […] There is a lot of discrimination against the refugees.” said Yeo. “Most North Korean refugees […] come as single mothers, meaning that […] they themselves struggle to get by. […] Even at home, […] North Korean children do not receive [adequate] attention and help. Even the education system is very competitive.”

Yeo told the audience that HanVoice has been in talks with the Canadian federal government about establishing a program that would allow Canadians to sponsor North Korean refugees.

“We wanted to create an opportunity for these North Korean refugees to come over to Canada. [We] not only have a strong Korean-Canadian community, […] but I’d like to believe that Canada will take care of people who are displaced.”

Canada has historically shown favorable policies towards North Korean refugees, with a 90 per cent acceptance rate in 2011 and 2012. However, the Immigration Refugee Board of Canada (IRB) began rejecting applications in 2013 and 2014, citing that South Korean citizenship is guaranteed to North Koreans by default. In 2014, only one out of the 327 refugee claims was accepted.

“We wanted to create an opportunity for these North Korean refugees to come over to Canada. […] I’d like to believe that Canada will take care of people who are displaced.”

“Today I am here to share my story as a North Korean refugee,” said Cha. “I remember my first visit to Pyongyang. I remember the busy men and women rushing down the streets to ride shiny new buses to work. […] Young children playing by the grass. But, most of all: I remember my father. I remember walking up the steps of his university holding his hand. I remember his sharp suit, a uniform worn only by the very best in the country.”

Cha’s father was a high-ranking official before falling out of favour with the North Korean government. He was subsequently dismissed from his position as the vice president of a large mining company. The family’s socioeconomic situation deteriorated after this, and they decided to leave North Korea and seek asylum in South Korea.

“We would no longer be cared for in a way we were for the past eight years. […] In North Korea, our family had no future anymore, especially for me and my brother.”

The family initially planned to travel to the South Korean embassy and request asylum in Vietnam. However, the family was found by Vietnam authorities and detained, then sent to the Chinese Border. After five failed attempts to enter Vietnam from China, the family decided to enter South Korea through Thailand, where they met South Korean embassy officers. During this process, Cha was separated from her family for several days, during which her mother suffered a high fever and malaria.

“From North Korea into China, to Vietnam, to Laos to Thailand, and into South Korea. The world felt big. But, I’m here to tell you — still, there’s no space for me and my family. As a refugee, my journey continues. We’re still searching for [a] home. It is only last year that my family finally had the time to reflect and talk. Not as refugees trying to survive, but [as] people, a family, trying to move forward.”

“It is only last year that my family finally had the time to reflect and talk. Not as refugees trying to survive, but [as] people, a family, trying to move forward.”

When asked what motivated her to pursue advocacy work, Cha recalled meeting others who “did not know that their [refugee] life was not normal.”

Such experiences led Cha to promote human rights for North Korean refugees. “From these experiences I [have], and heard, I couldn’t shut my eyes from [these] people who will have the same experiences as I did. […] Personally, I am not an extrovert, I am an introvert and don’t like doing public speaking. […] But if I don’t do this, if we don’t do this because we don’t like it, who can do it? That’s why I decided to do advocacy.” Cha is currently pursuing a media communications degree at Seoul University in South Korea. She worked as an intern in the office of Senator Yonah Martin, and has spoken in multiple universities about her experience.

Cha emphasized the importance of empowering North Korean activists as the leaders of their own movement, “North Korean refugees […] can act as a bridge, and as a main voice […] [representing] North Korea. […] When people just see us as victims and media or organizations paint us as victims, they can get more attention, but that’s it. We cannot see any changes. […] but when you see them as a powerful potential, North Korean refugees can [assume] an important role as agents of change, said Cha.

“North Korean refugees […] can act as a bridge, and as a main voice [representing] North Korea.”

“Only five years ago, I was just a victim by regime. Even when I first arrived to South Korea, I considered myself as a victim because people looked [at] and treated us as victims. But there [were] some people who supported, encouraged me. […] I [was] empowered to become an agent of changes and to help my homeland. […] It is not because I have a special ability, I am just one of [the] 23 million North Koreans. So, if I can do this, my family, my friends can do this, and all […] 23 million people in North Korea can do [the] same things to make North Korea’s change. […] And I believe that change starts in a small step.”

Cha concluded her testimony with a reminder of shared humanity. “I believe that I will end my journey in a free North Korea. […] I don’t want you to feel sorry or pity hearing my stories. My story is not one of weakness. My story is one of great strength. It’s one of great power; the power of parents’ sacrifice for their family. The power that resides in our shared humanity, […] including North Koreans, this humanity gives us the same chance to live.”

“My story is one of great strength. It’s one of great power; the power of parents’ sacrifice for their family. The power that resides in our shared humanity, […] including North Koreans, this humanity gives us the same chance to live.”

Editor’s note: Some quotes have been modified in consultation with the speaker for clarity reasons.