The rage trapped in rubble 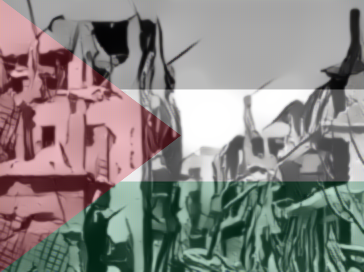 As part of this year’s Boycott, Divest and Sanctions (BDS) Week at Concordia, Students in Solidarity for Palestinian Human Rights (SPHR) Concordia premiered the film Killing Gaza. Dan Cohen and Max Blumenthal, the directors and producers of the film, presented their film with a warning that the content would be grim. They joked that they had just finished inserting the score an hour before the premiere, noting that we were their first audience. The two journalists also promised us we’d find relief upon witnessing Palestinian youth’s artistic resistance against all odds. After fumbling with the auditorium’s sound system, the lights went off and we were virtually inserted into Gaza, post-Operation “Protective Edge,” or Israel’s 2014 attack on Gaza.

Video journalism can record history and spread information across the globe in an accessible way. Dan Cohen, as an independent journalist, spoke to this modern tool and provided criticism regarding its sensationalist and artificial uses. This style of reporting has captured the grim effects of war and catastrophe, but rarely does it capture what lives on after a newsworthy event, nor does it ever measure the grave and dire effects of tragedy on different peoples. Max Blumenthal, another independent writer and journalist, joined forces with Cohen to record the Israeli terrorisation of Gaza. Blumenthal also sought to record the shrapnel of tragedy, the rubble of emotions, and the remains of a tortured people while other journalists fled to cover news items deemed more “relevant.”

Cohen and Blumenthal did not lie – the film was incredibly bleak. Grandfathers told of their grandsons’ deaths at the hands of Israeli Defence Force soldiers, women cried as they roasted in the heat of the sun, without shelter or electricity. Babies froze, killed by Gaza’s harsh winter. The film nevertheless showed resistance in the form of civilians arming themselves to take on Israeli soldiers, of children playing pretend in the spoils of a shelled mosque, of youth break dancing on rubble, and of a young painter showing off her oeuvre. The documentary is a testament to Palestinian’s polymorphous resistance and humanity in the face of terror, but also serves as chilling evidence to Israel’s war crimes and the traumatic effects of these crimes on an entire people.

My gut wrenched when I heard the taunts of right-wing Israeli protesters calling for the death of “all Arabs.” I felt ill as I saw Israel Defence forces (Tsahal or IDF) soldiers, most of them my age, laugh and feast on sushi after watching the clouds of smoke from a bomb planted in Gaza blend with the sky’s texture. Every instance of Israeli brutality caught on camera was another reminder of how desensitised a people can become. This film showed the pain of individual Gazans and plunged viewers into the reality of unquantifiable agony. Cohen’s camera followed intimate, domestic tragedies but also inserted them into a larger context, underlining the continuities of Israeli horrors. Through the act of documentary filmmaking, the different layers of reality merged into a moralising and heart-wrenching call to action. Attacks cannot simply be tossed aside; they break communities. Beyond a lost life, a whole family and community grieve their loss and tragedy.

The documentary immerses the viewer into a complex, dense truth that one cannot simply choose to look away from or wander off onto the next ‘most important subject.’ In the age of catchphrase articles and minute-long news reports, Killing Gaza calls for us to take the time to consciously inform ourselves on current issues in a deeper, more diligent way. Despite the formal limits of filmmaking in fully communicating lived experience, the film reveals Gaza’s pain and encourages viewers to ponder on what acts of solidarity have impact.