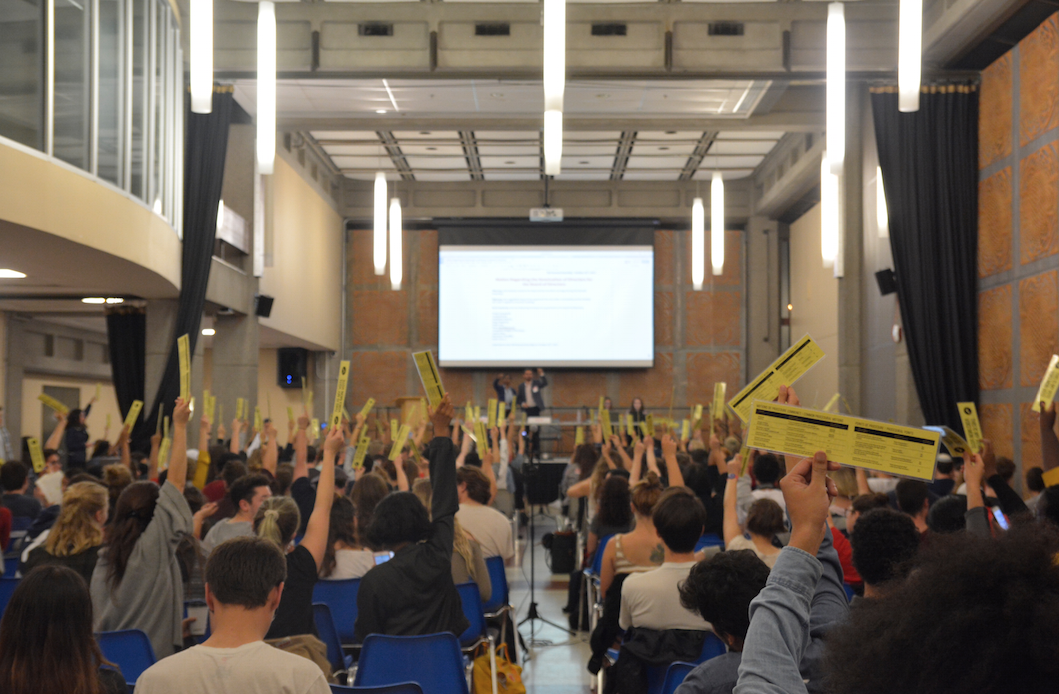 The Students Society of McGill University (SSMU) Fall General Assembly (GA) convened on Monday, October 23. Over 200 students attended. The GA convenes once each semester and is the main forum in which students who are not directly involved in student government can make their voices heard.

Motion of non-confidence in SSMU President

The night began on a contentious note, with Arts Representative Kevin Zhou proposing a suspension of Robert’s rules in order to adopt all late motions to the agenda. Normally, this would not be in order, but due to a failure on behalf of the SSMU President, Muna Tojiboeva, to notify the public of deadlines for submitting motions, all of the motions were sent in late.

The proposed motions included a motion advocating for SSMU to urge McGill to support and participate in the International Institute of Education’s Syria consortium for higher education in crisis, a motion for SSMU to condemn the disciplinary action which was then being taken against Masuma Asad Khan by Dalhousie University, a motion regarding changes to the SSMU Sustainability Policy, and a motion of non-confidence in the SSMU President. Later during the assembly a motion was proposed by a member regarding the SSMU building closure.

The audience voted to suspend Robert’s rules and adopt the agenda as a whole, however, SSMU Director, Jonathan Glustein, took issue with the method of counting the vote and demanded a recount. This led to a protracted debate about the method of voting, Glustein asserting multiple times that he could not accept a vote that wasn’t counted by hand. Ultimately, after considerable delay and confusion, the vote passed and the agenda was not adopted.

All motions were added to the agenda, however, except the motion of non-confidence in SSMU President Muna Tojiboeva. After a vote by secret ballot that took roughly half an hour to administer, the motion was rejected, falling short of the two-thirds majority needed to adopt it onto the agenda despite earning the support of more than half the students in the room. Some members expressed frustration with this decision, voicing concerns about the lack of information Tojiboeva made public about the deadline for submitting motions.

due to a failure on behalf of the SSMU President, Muna Tojiboeva, to notify the public of deadlines for submitting motions, all of the motions were sent in late.

Catherine, a U3 Arts student, urged the Speaker to reconsider the vote.

“I’m wondering why this is our voting procedure when the only reason why we have to do this is because of Muna’s incompetency,” said Catherine. “This reinforces the motion that was proposed because she messed up.” This proposal was not in order, however, and the motion of non-confidence was not debated.

Nominating the new Board of Directors

Following this contentious vote, the agenda was adopted, and the assembly moved on to ratifying the 2017/2018 Board of Directors.

The Board of Directors is the highest governing body in SSMU, with the power to ratify motions passed in Legislative Council and references from the Judicial Board. According to the Constitution, it must be made up of 12 members: four SSMU executives, four legislative councilors, and four members-at-large. The question of whether or not this combination of Directors is the only permissible composition for the Board is currently the subject of a tense debate in the upper echelons of SSMU. This is because until late September, when VP Student Life Jemark Earle took office as a Director, there were only three executives and an overwhelming nine members-at-large serving, throwing the Board’s decisions during this period into questionable legal territory.

On November 15, however, the Board for the new academic year is scheduled to take office. As such, the nominations up for debate at the GA included President Muna Tojiboeva, VP Finance Arisha Khan, VP Internal Maya Koparkar, VP Student Life Jemark Earle, Vivian Campbell, Madeleine Kausel, Noah Lew, Mana Moshkfaroush, Josephine Wright-O’Manique, Jessica Rau, Alexandre Scheffel, and Kevin Zhou. The four executives are currently serving on the Board, as are members-at-large Lew and Scheffel. The President and the VP Finance are constitutionally mandated to serve on the Board, so the nominations of Tojiboeva and Khan were not up for vote, and they were automatically ratified.

What followed was a debate about whether or not to divide the question of ratification for the other ten nominees, meaning the audience would have to vote on each nomination separately instead of ratifying the list in its entirety. VP Internal Maya Koparkar motioned to divide the question, and despite vehement opposition from a few students, the motion passed.

Vivian Campbell, Madeleine Kausel, Maya Koparkar, Jemark Earle, Mana Moshkfaroush, Jessica Rau and Kevin Zhou were all voted onto this year’s Board with overwhelming support. Noah Lew, Josephine Wright-O’Manique, and Alexandre Scheffel all fell short of the threshold to be ratified onto the Board of Directors.

Noah Lew was the first contentious nominee. When the Speaker announced that he had not been voted onto the Board, a large group of people stood up and filed out of the ballroom. It was subsequently announced via social media that the group had left in order to protest the vote against Lew, which they perceived to be motivated by anti-Semitism.

the group had left in order to protest the vote against Lew, which they perceived to be motivated by anti-Semitism.

Following the ratification of the Board of Directors, the audience voted in favour of the motion advocating for SSMU to lobby the university to provide scholarships and other educational supports to Syrian refugees. A U3 Arts student expressed support for the motion:

“2.2 million Syrian students outside of the country are not in school. […] It’s safe to say that the majority of refugees in the countries that are taking […] refugees aren’t being educated properly. […] You can understand why they are being called the ‘lost generation’ […] and why it’s being called an education crisis. And, despite these statistics, despite the fact that so many nations have taken refugees, there has been no form of institutional support for people who need to continue their post-secondary education.”

The GA also voted with overwhelming support to condemn the disciplinary action being taken by Dalhousie University against Masuma Asad Khan. VP External Connor Spencer gave context for the motion.

“This is a student executive at the Dalhousie Student Union who had a formal complaint lodged against her for her activism work within the union, and the university decided to entertain it, [accusing her] of discrimination against white people that she has perpetuated by speaking of white fragility in the context of anti-colonial Canada 150 events.”

The GA also voted to pass the motion amending the SSMU sustainability policy.

After these motions pass, U1 Arts student, Nadine Pelaez, an exec from the Player’s Theatre, brought a motion to the floor asking SSMU to draft a concrete action plan for dealing with the building closure. They communicated feeling abandoned by SSMU given the value of the Players Theatre to students, and stressed the failure of SSMU to make arrangements for temporary space during the scheduled Spring renovations.

Pelaez quoted from the SSMU website to stress the importance of this motion: “SSMU’s primary obligation shall be to support affiliated student groups and […] student endeavors shall be prioritized over any other sort of endeavor in SSMU’s space.”

Anastasia Dudley, a U3 student and representative from Midnight Kitchen echoed these sentiments. The audience passed the motion with overwhelming support.

During the question period, Arno Pedram, a Culture Editor at The Daily, asked President Muna Tojiboeva to respond to the fact that a majority of the students present voted in favour of bringing forward a motion of non-confidence in her. Tojiboeva responded by claiming that she is supported by the larger McGill community, and will not be influenced by the non-confidence of a comparatively small group, and then proceeded to accuse the audience of anti-Semitism.

Pedram responded, “Yes, this body isn’t the majority of students, but it still represents students who care.”