I am not your dollar-store Indian

Our contributor’s take on cultural appropriation 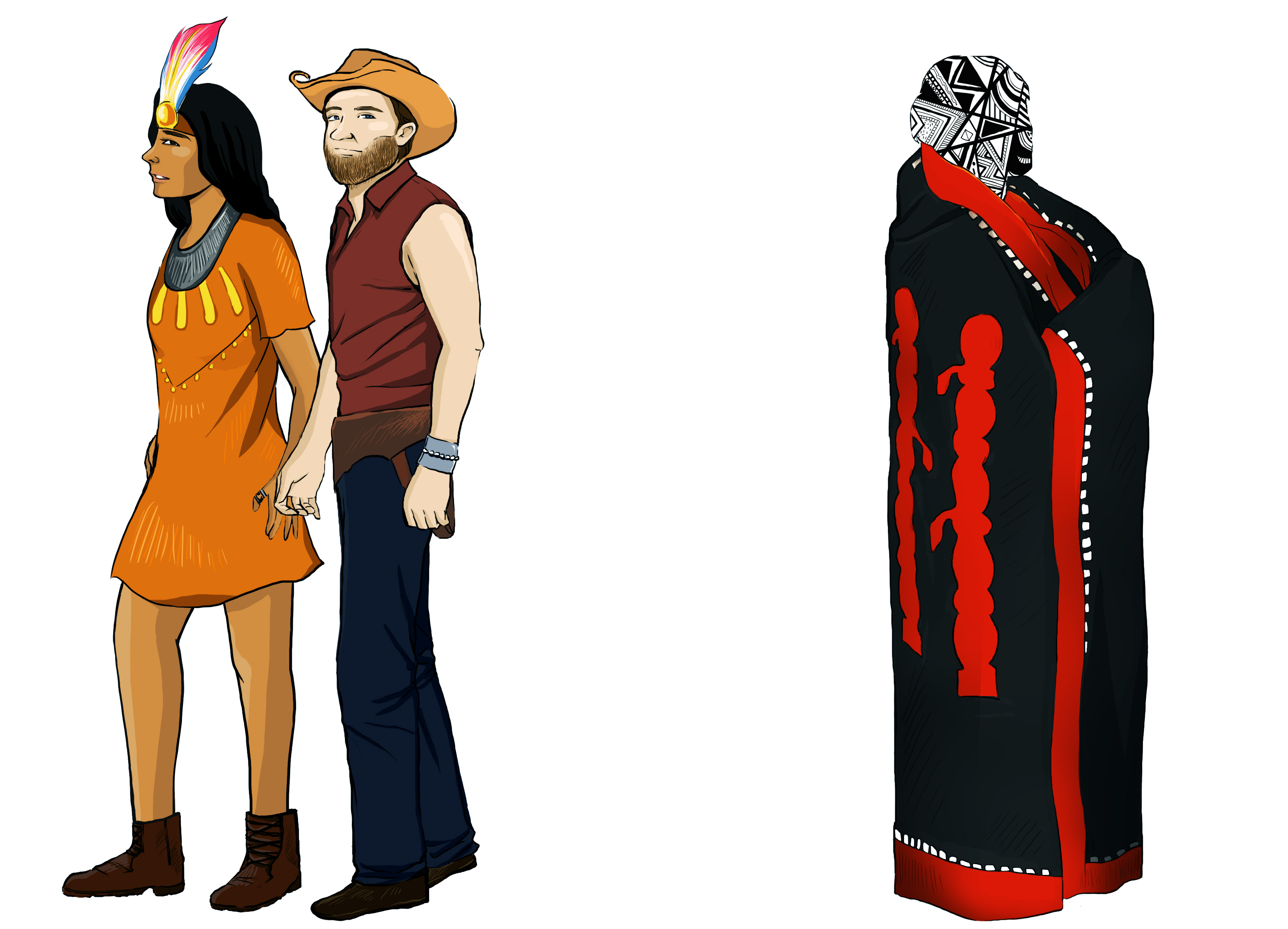 One of my first memories is of my grandfather Tsíbasa, a hereditary chief of the Fireweed clan, wearing his full regalia in the feast hall. I couldn’t have been more than three years old. In my memory his button blanket and head dress have the presence of a mountain. I would like nothing more than to gain the knowledge and respect necessary to become a chief, and wear traditional Gitxsan chiefly regalia. However, in Gitxsan culture, it is unlikely that someone like me, an aspiring anthropologist with an amíshuíwa (non-Gitxsan) mom, will be chosen to lead. I respect this and would never knowingly disrespect Gitxsan protocol. I can understand why people who don’t understand the history and laws behind regalia would want to dress like one of our chiefs–even on Halloween. But please, don’t.

This is just my story. I’m not the voice for Indigenous students at McGill, or my nation. I am only speaking on behalf of myself. I find it both funny and tragic how Indigenous people have to constantly clarify that. Because maybe there are Indigenous people who don’t really care how you dress up this Halloween, and they have every right to their opinion. I’m also fairly certain those people wouldn’t mind if you did not dress up like them. It would be nice if I didn’t need to have an opinion on a Halloween costume, but that’s not my reality. I have to take a stance on this, because of where I come from, and because of the hardships that my ancestors had to persevere.

Because of this responsibility, I recently emailed someone at “Halloweencostumes.com” inquiring about why they still carried costumes that inaccurately (and disrespectfully) depict Indigenous people. The representative assured me that such “costumes” were mostly for theater productions and history projects. Firstly, I would be concerned to see a “sexy Pocahontas” in any school, both because of its reinforcement of the trope that sexualizes indigenous women, and its legitimizing of inaccurate portrayals of regalia in a learning environment. Nevertheless, all I could think was how silly it was of me to assume that people shopping on halloweencostumes.com would be searching for halloween costumes, when they are clearly looking for educational pieces on my culture.

Usually, people would be quick to label this as “cultural appropriation”, but I loathe that term. What does it even mean? The first response to come up on Google is Wikipedia’s definition: “the adoption or use of the element of one culture by members of another culture.î”When I see someone wearing an “Indian Brave” costume, it doesn’t feel like an “adoption” of an Indigenous culture. However, it does feel like a disrespect and desecration of many Indigenous cultures. Those costumes do not represent Indigenous people, and they never have. They actually represent some amíshuíwa fantasy of how an “Indian” looks. Maybe the costumes are only supposed to honour the dead Indians that they allegedly depict. Wouldn’t that be ironic, eh? Disrespecting living Indigenous people in an attempt to honour the dead ones.

Still, most often people claim that they are honouring Indigenous people by appropriating Hollywood iconography. In Grade 10, my French teacher wore a painfully inaccurate costume that was most likely marketed as “Reservation Royalty” or “Indian Maiden”. When I told her that I did not appreciate her costume, she insisted that it was meant to “honour Indians.” I thought, “Well, there’s a real life “Indian” right in front of you, and I don’t feel so honoured.”  It would be nice if I didn’t have  to educate my own teacher on what’s honouring, and what’s insulting. It would also be nice if clueless retailers didn’t make any products that desecrate the power of regalia. Not only are the costumes disrespectful, they are a reminder of the genocide that needed to happen for amíshuíwa to feel legitimate on this land. The same genocide that led to me writing this article.

These costumes usually depict a romanticized chief/warrior for men, or an eroticized Indigenous maiden/princess for women. Firstly, in Gitxsan culture, the regalia that people on Halloween (poorly) attempt to recreate is reserved for use in ceremony, and should only be worn by those with the hereditary right. I’ve seen more non-Indigenous people wearing headdresses as Halloween costumes than I’ve seen Gitxsan chiefs in their full regalia. Yet what angers me the most are the costumes meant for women. I do not identify as a woman, and I do not mean to speak on their behalf, but it feels obvious to me that these costumes stem from, and reproduce, the fetishization and objectification of Indigenous women. I find this especially disrespectful since, like many Indigenous nations, Gitxsan are matrilineal and have many female chiefs.

Not only are the costumes disrespectful, they are a reminder of the genocide that needed to happen for am’shu’wa to feel legitimate on this land.

Someone truly concerned with honoring Indigenous people would have the respect to not dress as a dollar store version of one. That is the part that never made sense to me. Indigenous peoples have been quite outspoken against the use of our identity as mascots or costumes, but still, certain amíshuíwa insist that they are honoring us. They donít seem to think we understand identity politics, or, maybe they donít believe we managed to survive the attempted cultural genocide. We are still here.

If you’ve made it this far in the article, you’re most likely not the problem. At the same time, I wouldn’t be surprised to see someone in a poorly crafted Pocahontas costume this Halloween. I wouldn’t be surprised, but I’d still be sad. So please, for my sake and for the sake of many other racialized students on campus: go as a jellyfish or anything really.  But please, do not dress up as an Indian, or wear blackface, or find some other new fun way to be racist. It is disheartening to see these costumes keep inexplicably popping up in stores. The only reason they are still there is that people keep buying them. The stores that sell them aren’t intentionally racist, they’re just ignorant and greedy. So, please don’t buy them, and discourage a friend or two as well.

Don’t go as a jellyfish just because I told you to, or because going as an Indian is offensive or “not PC”. Wear any (non-racist) costume you want because you are a good person, have a strong sense of social responsibility, and because you can get a little more creative than that.

Going up to an amíshuíwa person to confront them about their costume is and has been extremely stressful for me, and probably for other racialized folks as well. It’s funny how mad people can get when you take away their freedom to discriminate. Us Indigenous folks have a lot of other things to worry about, so I would really appreciate it if I didn’t see any dollar-store Indians this Halloween.

There will be a panel and discussion on cultural appropriation Monday, October 30th, 5-7 PM in the SSMU Ballroom. Check out the event on Facebook, Decolonizing Halloween: Culture Vultures & Us.