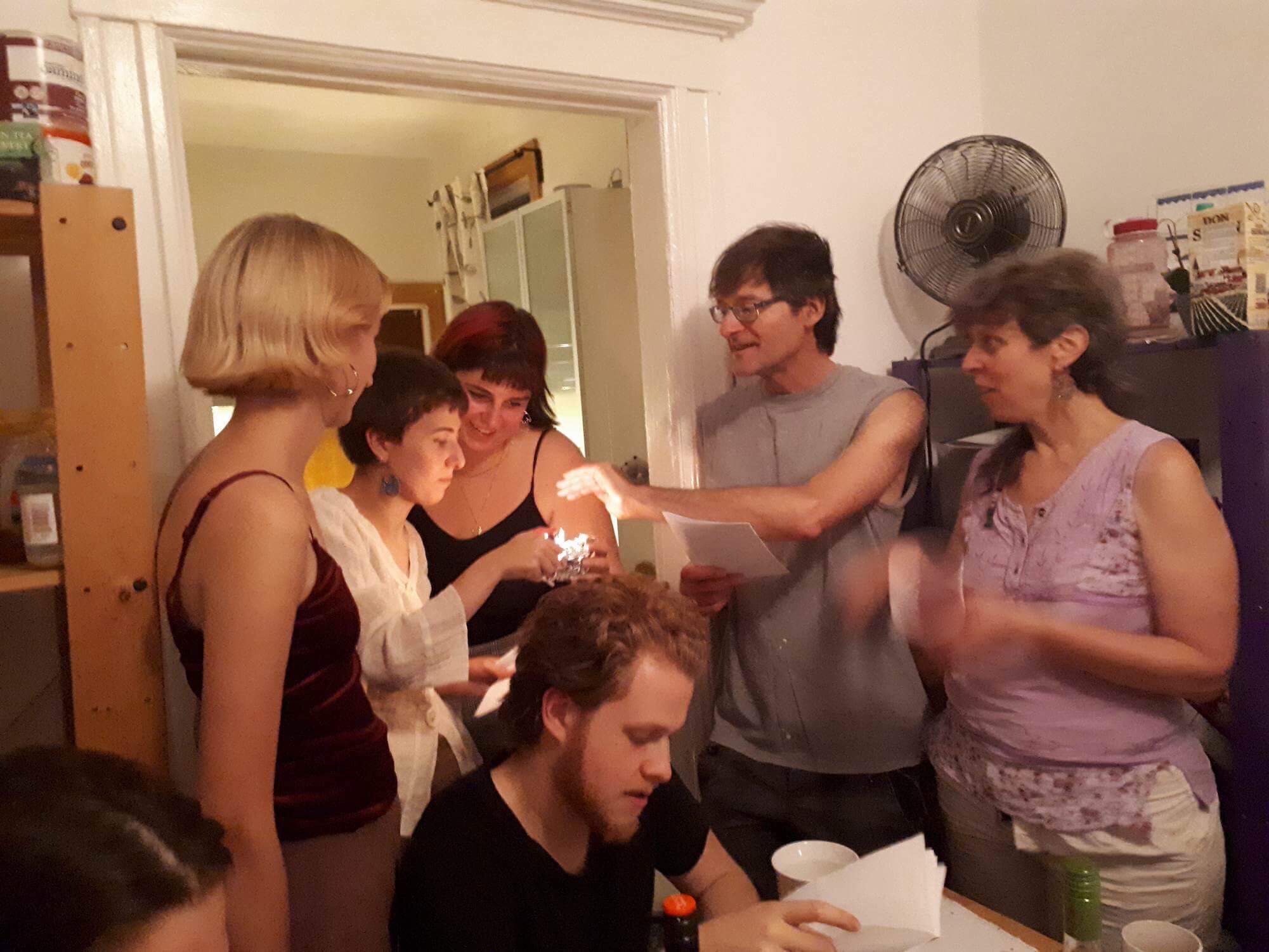 Independent Jewish Voices, or IJV, is an organization that gives a voice to Jews who refuse complicity in Israel’s continued disregard for and violence committed against Palestinians within Israel and Palestine. According to their website, IJV Canada is “a national human rights organization whose mandate is to promote a just resolution to the conflict in Israel and Palestine through the application of international law and respect for the human rights of all parties.” Rosh HaShanah, literally “head of the year,” signifies the beginning of the year according to the ancient Jewish calendar. It marks the beginning of ten days of penitence, but it also allows Jews to reflect on how to make positive change during the upcoming year. I’d been searching for outlets and organizations in which I could use my Jewishness towards both celebration and change, so I gladly attended a radical Rosh HaShanah celebration hosted by IJV McGill.

One of the most grounding aspects of the celebration was the presence of different generations of Jewish activists. Although most of the individuals present were students, younger and older adults alike shared their backgrounds and their roots in Jewish activism and social justice. Never before had I been in a space where I related to Jews from older generations, in terms of my politics. Much of my conversation with older Jews, including with my parents and grandparents, has centered around how they believe Zionism is an integral part of a global Jewish identity. However, I felt as if everyone at the celebration, regardless of age, was working toward the same goals of advocating for the liberation of marginalized groups, specifically those Palestinians who are targeted by Israeli occupation.

Because IJV is a radical organization with an anti-oppressive mandate, the organizers of the dinner felt it appropriate to alter the brachot, or blessings, over wine, bread, and other items to make them as egalitarian as possible. Gendered language was neutralized, and patriarchal phrases were altered or left out completely.

Following blessings, guests of the potluck-style celebration were invited to choose from a large selection of homemade dishes, with both Sephardic and Ashkenazi origins. Many of the items were vegan and vegetarian, including stuffed cabbage, vegan brisket, assorted salads, and lokshen kugel, which is a traditional noodle pudding served throughout the year in Ashkenazi Jewish homes.

Schmoozing, feasting, and discussion ensued throughout the evening. Some folks discussed the importance of learning Yiddish as a means of reclaiming an ever-fading Yiddishkeit identity, another discussion centered around Jews originating from Northern and Eastern Europe. Others played Jewish geography, a game common amongst North American Jews, to see how many mutual acquaintances were had. General themes of the evening emphasized cooperation, personal growth, and organizing for the upcoming year.

The existence of anti-Zionist Jews necessitates a conversation surrounding the importance of Zionist ideology to a greater Jewish identity. Hani Abramson, a Jewish activist, Jewish Studies major at McGill, and member of IJV, explains how religious aspects of the Jewish New Year tie in with a radical, anti-Zionist Jewish identity: “Rosh HaShanah is a time for reflection and spiritual renewal. Many of us view our activism as a deeply spiritual activity informed by our connections to our Jewish identities. By fostering a Jewish space to celebrate Jewish custom and tradition that stands for justice in Palestine, we are defying decades of effort by the Zionist project to intrinsically marry Jewishness with the state of Israel.”

Although Israel was founded in the name of the survival of the Jewish people, speaking out against Israelís atrocities does not undermine one’s identity as a Jew. Israel’s founders were ethnically Jewish, but they were not necessarily religious Jews. In fact, being critical of Zionism perpetuates secular Jewish values of social, racial, and economic justice found amongst progressive Jewish communities worldwide. It seems pointless to embrace oneís identity as a Jew without continuously advocating for and empowering marginalized groups, including Palestinians.

This year, Rosh HaShanah coincided with a defeat for anti-Zionist and pro-Palestine groups on campus. Earlier in the week, the SSMU Board of Directors voted Boycott, Divestment, and Sanctions (BDS) unconstitutional according to the SSMU’s constitution and equity policies. The decision cites the existence of BDS as inconsistent with the their policy against discrimination based on national origin. The decision perpetuates the falsehood that BDS wholly advocates for the abolition of the state of Israel. BDS seeks to end international complicity in Israel’s continued occupation of Palestinian land. Speaking out against a state’s colonial atrocities is not equal to speaking out against students from that state.

What does this decision on behalf of the SSMU Board of Directors in ruling BDS unconstitutional mean for IJV and SSMU services that exist to support marginalized folks, including those marginalized at the hands of colonial states? Hani expresses her distaste for SSMU’s decision: “The recent dealings regarding BDS at SSMU are not grounded in fact or reason. A small group cannot decide that violence is not ‘extreme enough’ to warrant political action. Also, as an Israeli national who does support BDS, I find the Justice Board’s logic to be incredibly problematic.” This decision not only engenders feelings of disenfranchisement amongst Palestinian students, but it also invalidates the hard work that has been done on behalf of anti-Zionist and pro-Palestine organizations in promoting the rights of those victims of Israeli occupation. Priority must shift to the recognition of Palestinian voices which are not only present within the state of Israel, but must be heard in order to shift the debate over Zionism away from Judaism.

IJV looks forward to hosting many upcoming events in Montreal to celebrate Jewish identity and to advocate for Palestinian justice. Look out for a radical Tashlich to celebrate the 5778 High Holidays, general meetings, and a talk in October with Rabbi David Mivasair on Jewish identity, Zionisms, and BDS. For more information on IJV, contact ijvmcgill@gmail.com, or check out their Facebook page! L’shanah tova, and cheers to a sweet and active new year.