Justin Trudeau is “a scrub with fuccboi tattoos”

An interview with Canadaland’s Jesse Brown about his new book, The Canadaland Guide to Canada 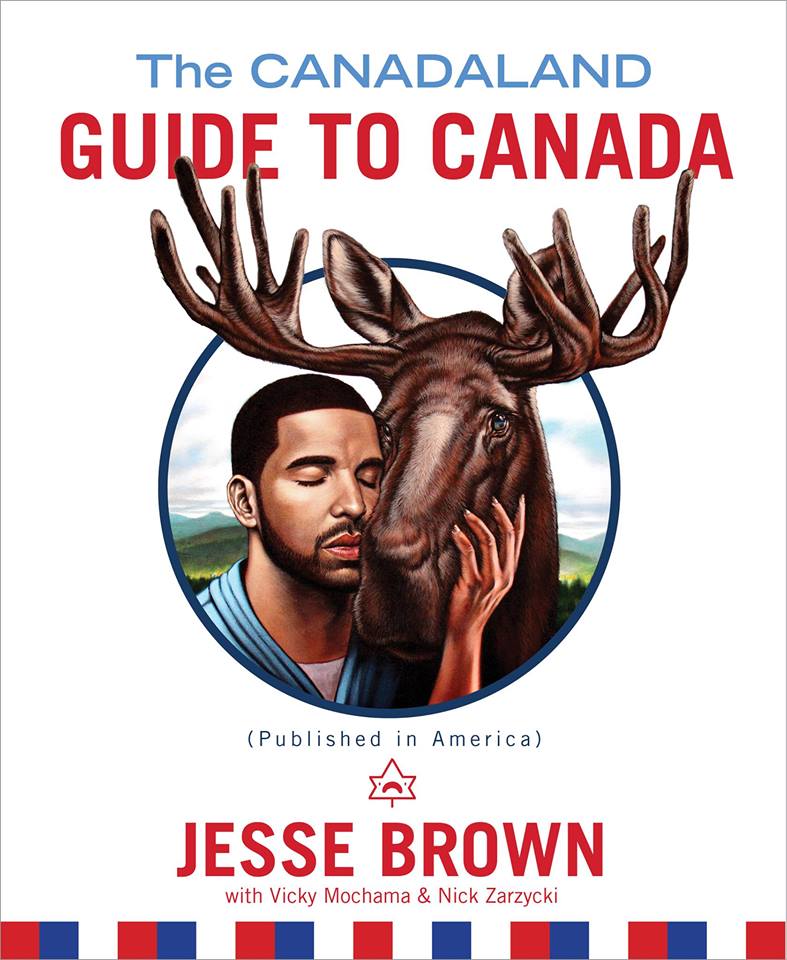 Amidst the clusterfuck of the Trump administration and Canada 150 propaganda, Canadians have been marinating in what journalist Jesse Brown calls our “Canadian humble superiority” – the widespread belief that Canadians are kinder, cleaner, and more rational than our billionaire machine-gun-toting neighbours to the South. Every Canadian’s wet dream “would be if you considered us just like you, but a little bit better,” he writes. But Brown thinks it’s time to shake Canadians out of that smugness.

Jesse Brown is the journalist at the helm of the popular media criticism podcast Canadaland. With his new book, The Canadaland Guide to Canada, he’s aimed his criticism – usually reserved for Canadian media – at the rest of the country. The result is a scorched-earth satire policy that leaves no aspect of Canadiana and no member of the Canadian elite untouched: from our “drunk, racist dad” John A. Macdonald to the “union-stomping, queer-hunting, barn-burning posse of farm boys” known as the Mounties. And if you’re not already sold, there’s an entire section ranking our venerable Prime Ministers from most to least fuckable.

The Canadaland Guide to Canada delights in exposing the hypocrisy of Canadian image: “You can dig up the world’s dirtiest oil and be known as environmentalists! You can sell billions of dollars of weapons to murderous tyrants and be known as peacekeepers! You can deprive Indigenous people of clean drinking water and be known as multiculturalists!” This book isn’t just funny – it’s full of little-known facts, sordid history, and merciless commentary on topics that many Canadians would rather avert their eyes from.

The Daily spoke to Brown, who’s currently touring across the country for a stage show to promote the book.

The McGill Daily: At the beginning of the book, there’s a key to how to read it and decipher the difference between a joke and a fact – for example, jokes are often in blue italics and facts are in infoboxes. But when those sorts of stylistic cues aren’t present, there’s the assumption that the reader will use basic common sense to determine that something that sounds absolutely absurd is meant in jest.

What are the dangers of writing funny stuff these days – in the days of “fake news” and low media literacy?

Jesse Brown: The kind of book we wrote is of a tradition that we grew up reading. I grew up reading Mad Magazine, Spy Magazine, The Daily Show’s book about America – just funny and mean and absurd joke books that are all about taking shots at the most powerful people. And that’s nothing that has been done in Canada. It’s kind of shocking – you can’t really point to a Canadian version of that. And that’s why we wanted to write the book.

But what I found out is there’s a reason why those books haven’t been made in Canada. And going through the process of dealing with the libel lawyer and permissions for copyright – there’s this perception in Canada that we’re actually not allowed to do that kind of humour. It’s why I wanted the book to be published in America – to get around that kind of stuff. We still ran into it and we just fought, and the publisher ultimately could be swayed and I didn’t want to do it if we couldn’t really do it. So I feel like we got there, and I insisted that the book be as vulgar and profane as it is. I thought that was really important.

MD: Is it to challenge the image that Canadians are restrained, or more sophisticated than Americans?

JB: Absolutely. First of all, if you can’t depict the most powerful people in your country fornicating, how free are you?

And also, yeah, the book is an assault on this phony notion of Canadianness that we’ve been telling ourselves and the world. And part of that is always trying to be gentle and fair and decent – sometimes at the expense of telling the truth.

MD: Right, and it’s not just that the book is vulgar or funny – it’s that it also brings up a lot of uncomfortable facts. It mixes facts seamlessly with satire – which I imagine would be nerve-wracking to publish, when you’re considering whether you’re going to face a libel claim.

JB: It’s not so much [that Canada] is so litigious as it is that it’s so sensitive and everybody knows each other. America is litigious. People sue each other all the time and they get huge payouts – like the Gawker [verdict] was over 100 million dollars. There’s never been a libel ruling like that in Canada. […] So the answer’s something else: we’re afraid to criticize one another, and it’s not because we’re so litigious but because we’re so interconnected, we know who the powerful are.

Everyone knows everyone and everyone works with everyone – like Simon & Schuster [the publishing house for The Canadaland Guide to Canada] also published a book about hockey by Stephen Harper.

“First of all, if you can’t depict the most powerful people in your country fornicating, how free are you?”

MD: In the past you’ve been criticized by Simon Houpt in the Globe and Mail for having “a track record of playing fast and loose with facts” on Canadaland. Is this book, in any way, a response to that?

JB: [Laughs] No, this book was written with Simon Houpt about as far from mind as could be imagined.

I appreciate that the responsibility is on me to very clearly communicate when I’m reporting a news story, when I’m telling rude jokes, and when I’m just offering my opinion – and make sure that those are not confused with each other – so that’s why we have a very deliberate, almost hilariously didactic “how to read this book” section. But it feels ridiculously limiting to me that I have to choose one role and stick to it throughout my career. One of the nice things about being an independent media company is that we can kind of do what we want.

“Who is this Jesse Brown guy? Is he a reporter? Is he a pundit? Now he’s doing satire.”

MD: One of the things I loved about the book was that you declared Justin Trudeau “absolutely unfuckable.” You called him “a scrub with fuccboi tattoos.” I love it! Do you think the Trudeaumania 2.0 fever has broken?

JB: [Laughs] Yeah, I think we’re starting to get the sense – the way that you do after a few months where you’re sleeping with somebody who looked too good to be true, and then you start to think “oh, didn’t he promise that thing?” And not just that, but the smell of their Axe body spray starts to grate on you, and there’s a patchouli scent on your pillow that you can’t quite get rid of – you just start to see through the whole thing. I think Canada is experiencing that right now with Justin Trudeau.

MD: Yeah, it’s incredible how fast the winds shifted; though the criticisms of him are very, very valid.

I think he just let a lot of people in Indigenous communities down with some of the dumbass shit he said about Indigenous kids just wanting “a place to store their canoes.” You know, it’s all surface.

MD: How is this book situated in the midst of Canada 150 celebrations? Especially given this book is really honest about Indigenous issues, at a time when Canada 150 is being dragged for being a very clear manifestation of the colonial imagination.

JB: Well, we wrote the book knowing that there was going to be this massive half-a-billion-dollar propaganda campaign for Canada 150, and we thought, “somebody needs to push back – we’re going to be drowning in maple syrup, and we need a little vinegar.”

I guess what I didn’t anticipate was that the propaganda would be so ludicrous, and so factually and historically incorrect that it would essentially spur the most hilarious and amazing and righteous [backlash]. It is incredible to see Indigenous Canada just dragging – that’s exactly the right term – just dragging the CBC and the government. […] This book is just a minor part of what we’re seeing – [the Canadian government has] opened the door in addressing Canada’s history, and they kind of want to point people down one path and they try to create a little bit of space like, “yes, we acknowledge that there are bad things that happened” and that door’s just being blown up. And it’s awesome to see.

It pains me to say it, but this actually may be a good thing when it’s all said and done. Because these festivities that they want us to patriotically enjoy – which most Canadians just ignore completely, because one good thing about Canadians is that we don’t do patriotism – but their insistence that we try it on for size is actually having this reverse effect, and the backlash is getting stronger than the propaganda campaign. So we’re a silly part of a very serious resistance.

“Somebody needs to push back – we’re going to be drowning in maple syrup, and we need a little vinegar.”

MD: I’m interested in that idea of backlash, satire, or opposition being stronger than whatever’s earnest or original. For example, I’ve noticed a really sharp uptick in quality in The Beaverton in the last year.

JB: I think that for a long time, the satire was as thin and vapid as the Canadian narrative itself. So when the Canadian narrative was just “oh, donuts n timmies, and we like to say sorry a lot,” then you get Rick Mercer and you get Air Farce, and you get This Hour Has 22 Minutes. But if we’re actually gonna go there – and talk about the history, even when you get it wrong you’re creating a really good setup for a killer jagged punchline.

So, yeah, CBC wants to do “the story of us” – well, there’s a lot of people who would really like to have a crack at the story of us.

“I think that for a long time, the satire was as thin and vapid as the Canadian narrative itself.”

MD: Do you have a favourite scandal or surprising fact that you learned during the course of writing this book?

JB: I think that my favourite thing is actually something that happened as a result of the book. I was tweeting about how crazy it is that our charter of rights and freedoms had to be signed to us by the Queen of England in 1982, and all of these Queen-loving Canadians were so angry with me, which is nothing new to me. But the fucking former Prime Minister, Kim Campbell, called me a “wingnut.”

That was my favourite thing – it just proved to me that the desire to maintain the status quo is just so important to a lot of people in Canada. And it really stops us from getting anywhere, in a lot of cases.

“The backlash is getting stronger than the propaganda campaign. So we’re a silly part of a very serious resistance.”

MD: So what can we expect at your show on Saturday?

JB: I’ll be doing a night of comedy, which is well outside my comfort zone. But I didn’t just want to go to bookstores and do readings. The book is really visual, and it’s a humor book, so I thought “okay, I want to do a funny show” and I’ve been taking it across the country. And it’s so much fun on stage.

I’m really excited that Montreal’s own Josh Dolgin will be on stage with me, playing some music, and I’m gonna leave in the Quebec stuff, and see what happens.

Brown will be performing in Montreal at the Rialto on May 20; tickets are $28 at the door. You can buy his book, written with Vicky Mochama, Nick Zarzycki, and other contributors, on Amazon.