We may be on the verge of a ‘refugee crisis’ 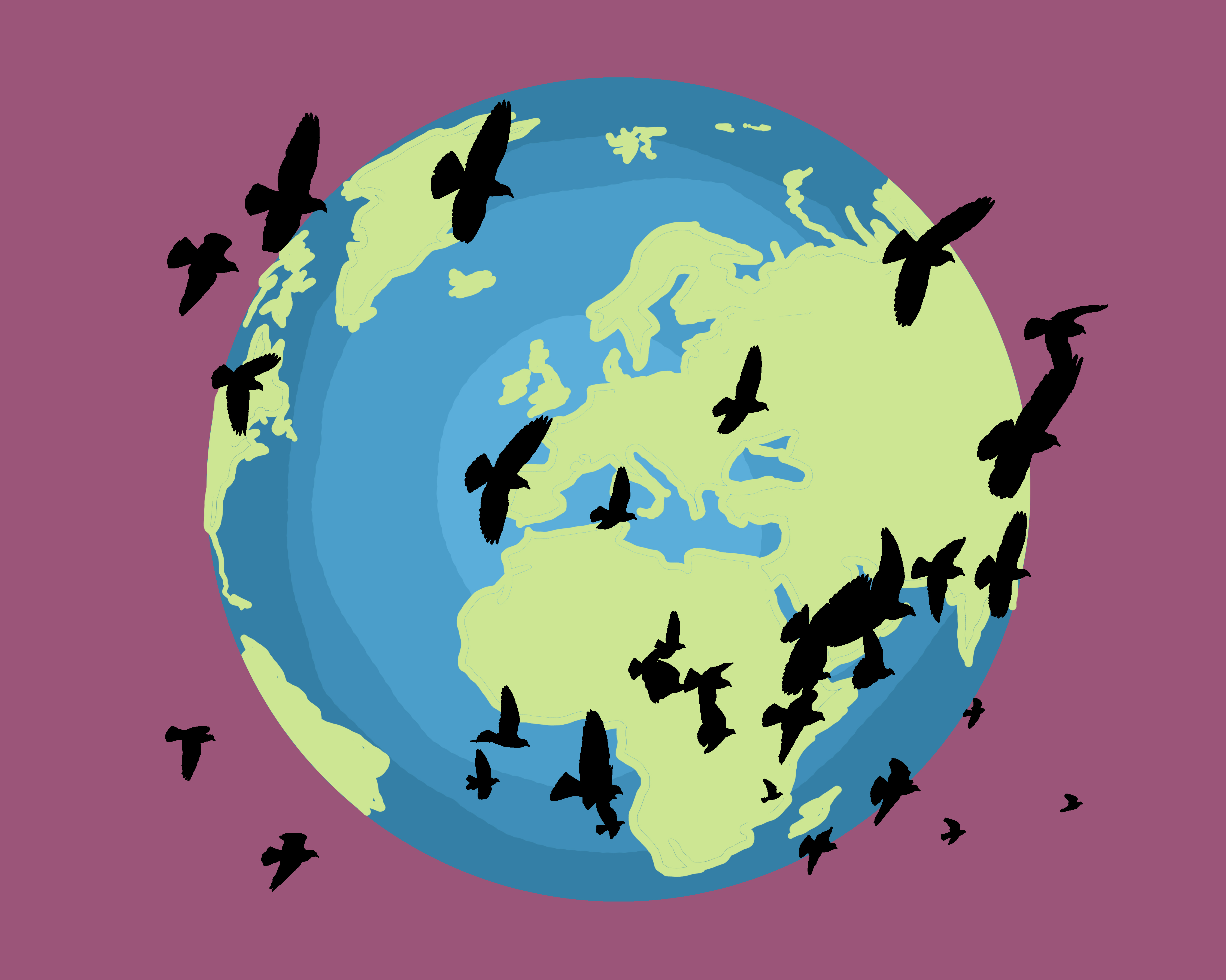 As war rages on between Assad’s Syrian armed forces and rebel groups, between Daesh (also known as the Islamic State) and coalitions formed from around the world, and between Boko Haram and Nigeria, forces millions of people are forced out of their homes and their countries to seek refuge. The United Nations High Commissions for Refugees (UNHCR) estimated in 2015 that there are 63 million people forcibly displaced around the world, of which 21 million of these are refugees that have left their country. Many of these refugees are displaced because of strife and war, but there is a growing amount of them that are forced to flee due to environmental circumstances. Environmental disasters happen every year around the globe, with some being sudden and lethal such as a tsunami, while others are slow and insidious like a drought.

The 2004 Indian Ocean Tsunami devastated numerous countries, most notably Indonesia and Sri Lanka, with a total death toll of 225,000 people, and 1.75 million displaced. According to the Geophysical Fluid Dynamics Laboratory of the U.S. National Oceanic and Atmospheric Administration, the threat of climate change and heating of the planet will most likely have an impact on the intensity of massive weather events such as cyclones and tsunamis as ocean surface temperatures increase.

As the glaciers melt and polar ice caps disintegrate over time, the sea level will also continue to rise. Projections from the Intergovernmental Panel on Climate Change in 2013 estimate under a business as usual scenario that sea levels will rise between 28 and 98 centimeters by 2100, enough to swamp most of the Eastern coast cities of the United States. Dire estimates where the warming of the planet quickens from lack of action to stop it and the Greenland ice sheet completely melts put the level rise to seven meters, enough to submerge London.

Droughts and wildfires are already increasing both in frequency and intensity in many places around the world. The 2012 droughts of the U.S. were the most expansive in the country’s history per the U.S. Department of Agriculture, with 71 per cent of the entire country under at least ‘Severe Drought’ monitoring measure for more than eight weeks in a row. While drought and wildfire historical records were beaten in 2012, they were again broken in 2015. The number of acres burnt those years were each triple the average from 1985-1995. Other arid areas around the world are experiencing similar trends, such as in Australia, where wildfires are also beating historical records in area burnt and starting earlier than ever in the year. Chile, whom in January experienced wildfires of scales they had never experienced before, needed the help of the U.S. to contain and eliminate the devastating blaze. While countries like the U.S. and Australia may be ready to contain these wildfires, and find solutions to droughts, it is hard to imagine other nations being equally prepared.

War, environmental change and low standards of living are likely to be interconnected together to make people choose to take refuge in a different country. A 2015 study from Columbia University and University of California Santa Barbara concluded that increasingly severe droughts in parts of Syria is likely to have contributed to the rebel uprising and public discontent with Assad’s government. According to their research, many farmers lost their jobs when their land was no longer growing crops due to the drought, and moved to the urban areas to compensate. The government’s lack of response to the 2011 Syrian drought crisis was not the only trigger to the original protests but played a substantial part, per another study from 2014 on the topic from the journal Middle Eastern Studies.

Diminishing resources, low standard of living and a changing environment seems to create a common theme as a similar situation took place around the Lake Chad Basin in Nigeria, which also borders Niger, Chad and Cameroon. The Lake provides water supply for thirty million people yet has decreased in size by 95 per cent from 1963 to 1998 and is continuing to shorten due to decrease in rainfall. The Nigerian side of the lake is where the insurgence of Boko Haram terrorists, who pledged allegiance to Daesh, drove millions of people away from the area for the resources provided by the lake.

If similar situations of such as ongoing drought and a lack of capabilities from authorities to help continue, many more people will choose to migrate. While the majority of refugees worldwide are hosted in Africa and other Middle Eastern countries, many also attempt the journey to Europe, and unfortunately it is not always legal. In 2016, 170,000 illegal immigrants were recorded to have arrived to Italy by boat from Libya, an enormous increase compared to 42,000 in 2013. Increased periods of drought will surely not slow down illegal immigration, especially since the 1951 U.N. Refugee Convention does not include environmental refugees in its outlined protocols. With a lack of legal status and support from the U.N., many people trapped in worsening environmental conditions on small islands coastal to Australia and New Zealand cannot apply for refugee status. The UNHCR has stated that it worries opening new discussions on refugee convention reforms with the security council nations could backfire and let countries take the option to back out altogether. A report from the Internal Displacement Monitoring Centre in 2015 concludes that 19 million people around the world were obligated to flee their homes from worsening environmental conditions. A World Bank report from 2015 estimates that a hundred million people will go back into poverty from climate change by 2030. While climate change is gradual and people may possibly escape increasingly inhospitable conditions by migrating, there seems to be not many solutions available to efficiently relocate all of these people properly.

Great new initiatives such as the Platform on Disaster Displacement, previously known as the Nansen Initiative, whom are consultants to the U.N. on policy reform to facilitate relocation and cross-border interactions displaced people, are taking root to eventually find a long-term solutions to this problem. Unlike some previous refugee crises, climates will not simply go back down to their original levels anytime soon, not if we can’t both stabilize carbon dioxide emissions and lower annual temperature average increase. That is of course the long-term goal that would avoid such a crisis, yet it is impossible to know today how much we will be able to curb the world’s greenhouse gas emissions, and how quickly. Some world leaders and military advisors are at least taking note of the potential risks of climate change and its inevitable refugee crisis.

Last year, a U.S. coalition of military and national security experts, which included advisors to Ronald Reagan and George W. Bush, sent a report to the Pentagon under their non-partisan Center for Climate and Security to outline the importance of a changing world climate to national security. The Pentagon adopted the same view and the Department of Defense started seriously considering climate change as a ‘threat multiplier’ which could potentially warrant the need for greater humanitarian aid or additional military intervention.

Former military advisor to the Bangladeshi President Munir Muniruzzaman, now chair to the Global Military Advisory Council on Climate Change, has publicly stated that climate change is the greatest security threat of the 21st century, not terrorism. It is easier to understand that point of view when the reality kicks in that Bangladesh is already trying to plan the relocation of twenty million citizens due to climate change and have asked countries like the U.K. for help doing so. Brigadier General Stephen Cheney, a member of the U.S. Department of Foreign Affairs has publicly supported the notion that climate change increased conflict risks and is an accelerant of instability, citing the Arab Spring, Syrian War and Boko Haram’s previous control over Lake Chad.

Unfortunately, the U.S. President Donald Trump does not believe climate change is real, let alone human caused, as he recently purged the United States Environmental Protection Agency and other federal agencies from even the mere mention of the term, essentially censoring science. It comes as quite ironic when his own appointed Secretary of Defense James Mattis gave a statement this month describing the potential dangers of climate change as a driver of instability in places with U.S. troops.

While it may not be immediately obvious that a refugee crisis between Northern Africa and Europe would have deep implications on the United States and Canada, we should also step up in taking more refugees, no matter where they are from. While some would argue that bringing instability into our borders is an unwise decision, as some public backlash from Justin Trudeau’s policy on accepting refugees has iterated, I would argue that Canada has some of the lowest population density in the world, and that we have ample space for refugees. Figuring out how to facilitate cultural, religious and linguistic transition will ultimately be key to not increase tensions and divisions, and admittedly Trudeau’s policies have shown to be lackluster in that department. The U.N. also won’t be able to be everywhere at the same time for humanitarian efforts, and countries who will be certainly affected by climate change should plan to minimize problems in the future, such as commencing dialogues right now with neighboring countries. Nature does not care for human made borders, and we know there have been five previous mass extinction events of life previously — we would be foolish to not attempt to slow down the sixth, which has already begun.