What drones mean for our future

Droning out the noise 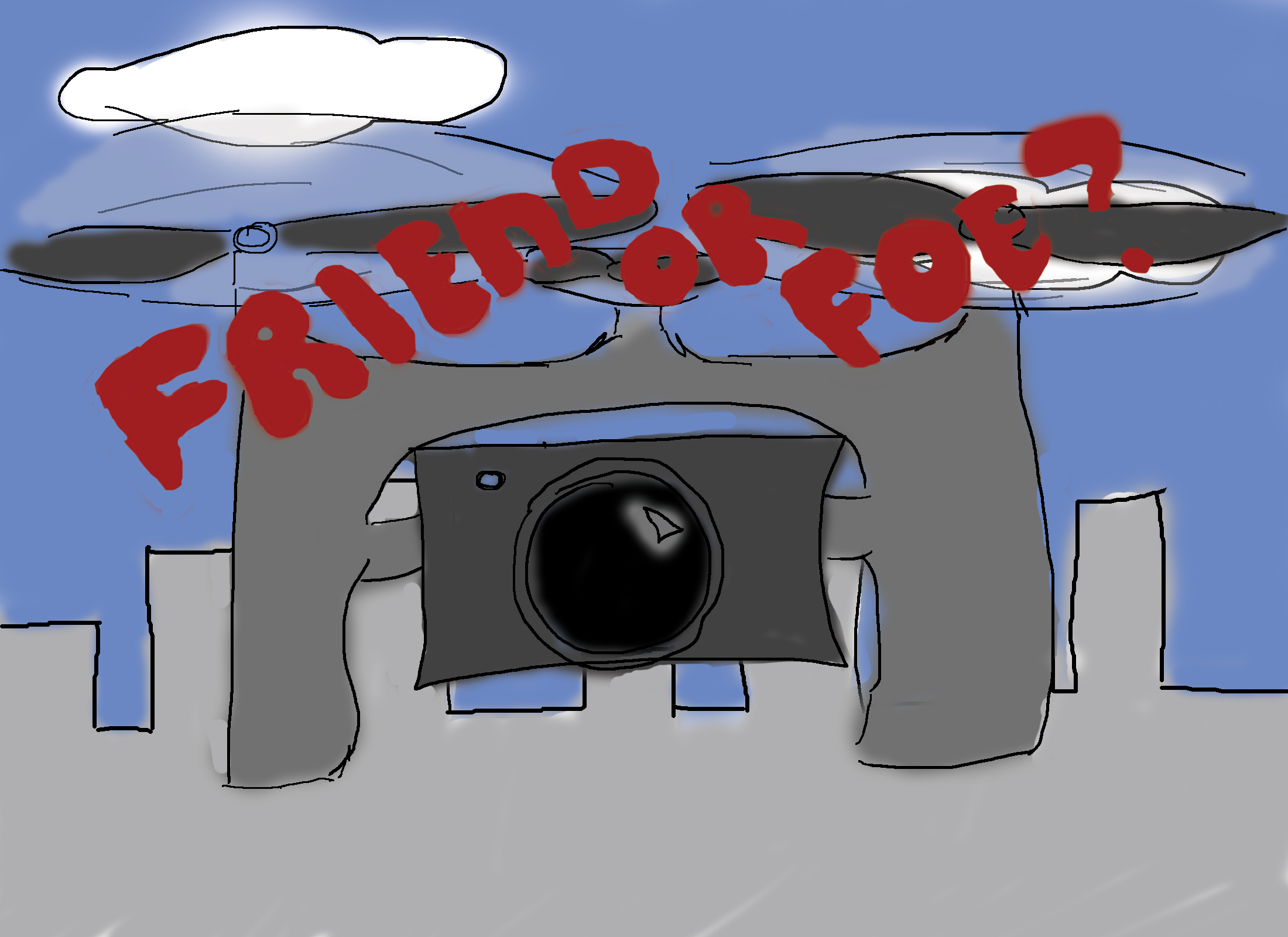 The US employed drones as weapons in the wars they waged against countries such as Pakistan, Afghanistan, Yemen – and continue to use them, today. In these and many other affected countries, drones represent a constant fear of death for most civilians. The sky becomes associated with a destructive technology that does not distinguish between civilian or enemy, and threatens to kill them at anytime. Drones involve an operator in front of a screen (that looks like a scene from a First-Person Shooter video game) controlling the fate of people’s lives across the world.

Some argue that using drones in war can hardly be considered a war when it is a one-sided battle, and involves a shooter hidden safely far away from all possible danger. Under the government’s claim to “combat terrorism,” innocent civilians have been targeted and killed by drones. More alarmingly, there is presently no precise data on the number of civilians killed by drones. The U.S. government does not provide the actual number of casualties but the Columbia Human Rights Clinic estimates that in 2011, 72 to 155 civilians were killed, with 52 of them identified reliably by name in Pakistan alone. The Bureau of Investigative Journalistm also estimates that 800 civilians have bveen killed by drone strikes in Pakistan, Yemen, and Somalia.

As demonstrated in numerous U.S. missions to supposedly combat terrorism, a vacuum can be created which fuels radical groups and perpetuates Islamophobic rhetoric. Not only do drones cause physical damage, but they contribute to the vicious cycle of the U.S.’ War on Terrorism. We argue that drones should be abandoned in wars no matter how tempting it is to use them because the consequences of drone warfare, such as unknown civilian casualties as well as fueling terrorism, are much more important than the advantage of possibly protecting the soldiers’ safety.

The dangers in the increased use of drones are important to keep in mind in order to make adequate rules and regulations. Drone crashes are dangerous – and since airplanes cannot detect small drones in the sky, drone crashes might put pilot and passenger safety in peril.
Safety and privacy issues as well as data security are a few of the main concerns regarding propagation of drone technology , in addition to the aforementioned issues. In 2015, a viral video depicted an 18-year-old in Connecticut who, working with his university professor, assembled a gun-firing drone, and the video shows the drone firing a gun outside at no particular target. Although they technically did not violate any laws since nobody was hurt, it is still dangerous when weapons can be possibly placed on drones by any civilian. This video clearly demonstrates how much drones need to be regulated in detail.

The Federal Aviation Administration in the U.S is currently trying to regulate drones in a balanced way that allows for technological growth while protecting civilians’ rights and safety. Although there are currently drone pilot training schools in place, a certificate from one of these schools must be essential for drone owners. Furthermore, tickets and penalties need to be put in place regarding breach of rules of drone flying conduct. New drone surveillance technologies need to be developed in order to ensure drones will not hinder security in any way.

In Canada, if a drone weighs less than 35 kilograms and is not used for commercial purposes (meaning it is strictly for recreational use), no permission is needed for it to be obtained: anyone can get a drone as long as those conditions are satisfied. The legal requirement is to follow the rules in the Canadian Aviation Regulations, more specifically the Unmanned air vehicles and Model Aircraft sections. If an aircraft is put at risk, if drones are flying in restricted zones or if they hinder anybody’s safety, a fine of up to $25,000 may be issued as well as jail time. The regulations assure basic safety for civilians, but they definitely need to be expanded upon. Transport Canada needs to issue new rules, policies, minimum age of drone flying as well as licenses for recreational use in the near future to keep up with this fast evolving technology.

In Canada, if a drone weighs less than 35 kilograms and is not used for commercial purposes (meaning it is strictly for recreational use), no permission is needed for it to be obtained

Nevertheless, we are hoping that this advanced technology is used for more fruitful purposes that do not put in question our ethics. Drones should be adapted to be used in agriculture for example in efficient seeding, irrigation, crop spraying and getting soil and crop yield analysis. Drones have been aiding in remote sensing for optimized management of natural resources, and these devices are used in the Agricultural and Environmental Sciences Faculty located at Macdonald Campus.

Drones capturing high resolution images as well as crop data can help to present maps showing soil quality and possible damage to plants. Drones can increasingly help transporting supplies like food and medical kits to remote areas. On a similar note, Amazon and Google want to use drones for package deliveries and more companies might join in soon after. Although this might encourage more people to consume and buy items since the delivery is fast and efficient, this delivery system might be good for the environment by reducing traveling to stores usually done by cars reducing a bit of traffic and consuming less fuel Drones can also be used in many other fields like journalism to capture perhaps a reality or event that would be difficult to capture in person due to security or accessibility issues especially in war-torn countries.

Transport Canada needs to issue new rules, policies, minimum age of drone flying as well as licenses for recreational use in the near future to keep up with this fast evolving technology

Films and documentaries can be made using drones instead of using helicopters and flying a filming crew to remote areas to capture inaccessible landscapes. Traffic surveillance and conservation of wildlife are among other possibilities of drone usage that seem promising. They have the potential of protecting some types of wildlife and forests, and they have the ability to track wildlife, and be used in the fight against poachers via thermal imaging. It might take time and be challenging at first, but with future drone regulations and policies, this technology can be integrated in our society with ease, hoping that aside from their recreational use, drones can help solve some of our transportation, data acquisition and environmental problems.