Threatening the future of science 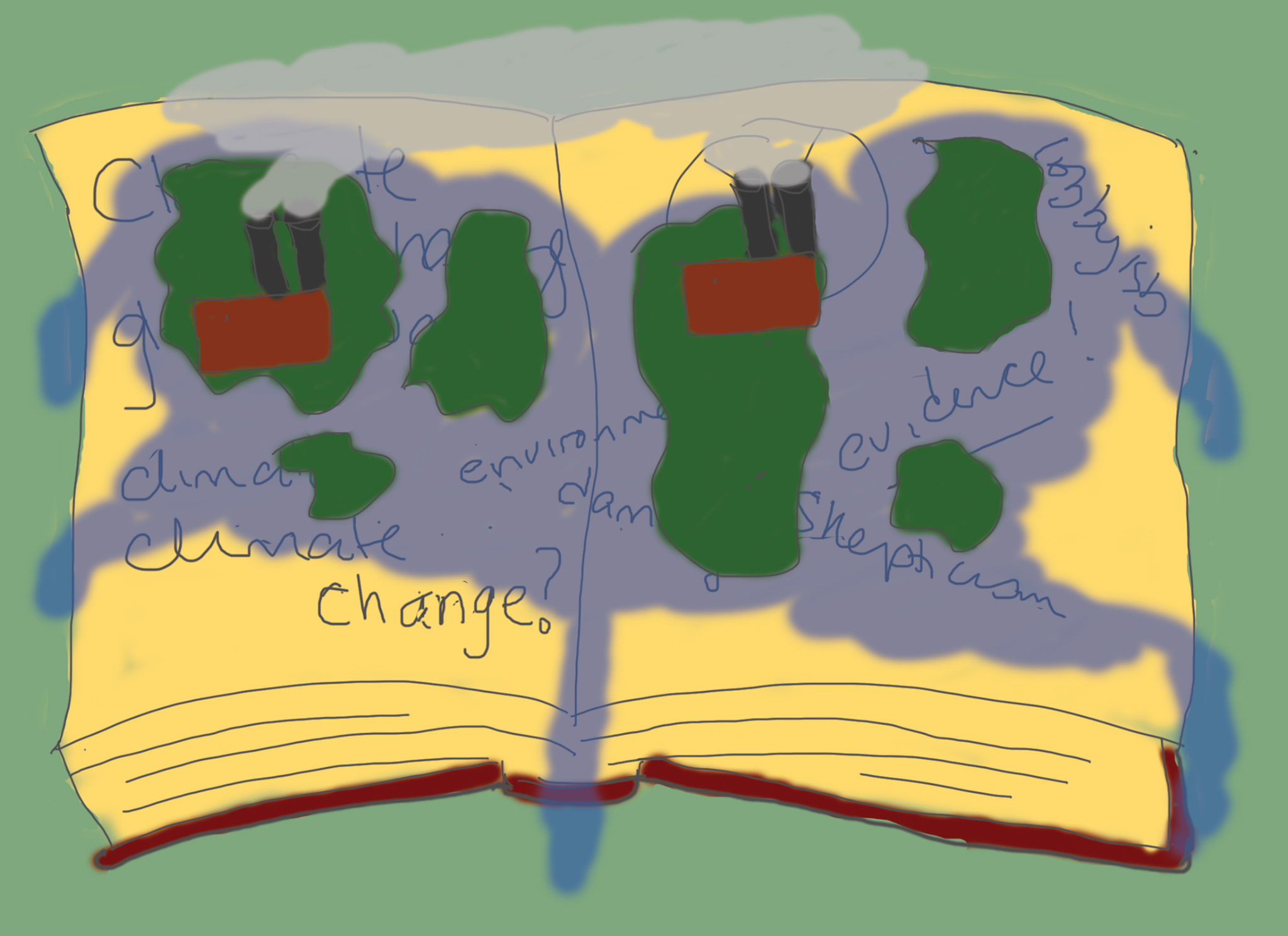 Many scientific and technological breakthroughs which altered our perception of the world have had to go through obstacles and time to be commonly accepted. Nicolas Copernicus published his heliocentric model of the Earth orbiting the Sun in 1543 and this theory was supported by Galileo, the inventor of the telescope, and later Isaac Newton amongst many others, yet it wasn’t until 1758 that the Catholic Church removed their publishing ban on the idea. Greek mathematicians such as Pythagoras in 600 B.C. discovered evidence that the Earth was round, and it became widely accepted for much of human history including through the middle-ages, yet from the late 19th century to the late 20th century organizations such as the International Flat Earth Research Society and publications such as the Earth Not A Globe Review sprang up to deny scientific consensus with religious rhetoric.

Apparently not everyone evolved

The theory of human evolution though widely accepted today, illustrated the modern conflict between science and religion, or theory versus belief. While On the Origin of Species by Charles Darwin was published in 1859, southern states of the U.S. such as Tennessee and Arkansas passed state legislature to forbid teaching the theory of evolution until a Supreme Court decision in 1968 which held that states could not require curricula to align with a specific religion. Religious leaders tried to combat this supreme court ruling by changing their tactic and advancing creationism as a viable scientific theory of origin, and states such as Louisiana passed legislature that any textbook which includes the theory of evolution must also teach the alternative theory of creationism along with it. Another court case in 1987 attempted to prevent states from requiring the teaching of creationism, with lawyers being successful in proving that creationism was in fact, not a scientific theory, and had no place in a textbook. Even in 2005, school districts, such as the Dover Area district of Pennsylvania are sued because they required teaching “Intelligent Design” in their schools, which is another pseudonym of creationism. In 2006 public school biology textbooks in Cobb County, Georgia, were being distributed with a sticker included which read “Evolution is a theory, not a fact, concerning the origin of living things.” According to a poll from the Pew Research Center in 2013 with 2,000 participants, sixty per cent of Americans believe in evolution while thirty per cent reject the idea. The study also included political party in their responses, and Republicans only had 43 per cent who accepted the theory compared to 67 per cent from Democrats.

The climate is in fact changing

In recent years, the public skepticism and denial of science has advanced beyond religion and into identity politics. While the U.S. federal space agency NASA has been recording satellite data to support the validity of climate change and itself agrees it is anthropological, which means affected by human activity and behaviour, the country is split in their acceptance of the scientific consensus. A 2016 study from the Pew Research Center finds that only 48 per cent of American adults believe that climate change is caused by human related activities, 31 per cent believe it is due to natural causes and twenty per cent think there is no evidence for climate change. The skepticism seems to stem from a lack of faith in the scientists and science themselves, as only 33 per cent of all participants agreed with the statement ‘Climate change scientists understand very well whether climate change is occurring.’

The American public also seems to think there is no consensus among scientists on the topic, as only 27 per cent agreed that there is a complete scientific consensus that climate change is human caused. These beliefs are quite concerning, because if we are to have a lack of trust in science or think our scientists are incompetent, then who exactly is competent on the subject and where should we receive our information from? There is a sort of contradiction going on here as from the same study, 39 per cent of participants of the survey say they trust climate scientists ‘a lot’ to give full and accurate information about the causes of climate change yet the news media, energy industry leaders and elected officials are down at seven, seven and four per cent respectively for the same category. Similarly to the case of evolution, there is also a political identity issue going on here, as 69 per cent of Democrats agree that climate change is human based while only 23 per cent of Republicans agree, per the same study. A similar trend is also present in factoring in scientific consensus, as more than half the Republican correspondents believe there is no consensus whatsoever among scientists.

In Canada, a 2016 study from Université de Montreal polled over 5,000 Canadians from across the country on climate change, and 61 per cent of the participants believe the Earth is getting warmer partly or mostly due to human causes. A 2016 study from the Pew Research Center compared carbon emissions to concern over climate change, and concluded that the highest countries as measured by emissions per capita such as the U.S., Canada and Australia were the least concerned with effects from climate change. Latin America, Europe and Africa were the regions most concerned with the effects of climate change.

The most astonishing part of all this data is the suggestion that there is no scientific consensus on climate change from climate scientists. All polls conducted on climate scientists show the complete opposite. A 2014 study from Verheggen et al. surveyed 1,850 climate scientists, of which ninety per cent of them with at least ten peer reviewed studies published agreed that greenhouse gas emissions are the main cause of global warming. A 2013 study from Power et al. conducted a meta-analysis of 13,950 articles published on global warming from 1991 to 2012 and found that only 24 of these rejected that climate change is caused by human activities. All other studies and polls among climate researchers demonstrate the same general result, which makes you wonder where people are getting their information from that there is no scientific consensus.

Politics and belief are intertwined

The main reason one would think that there is such a wide gap between perception and reality, especially among Americans, would be a lack of scientific literacy or knowledge. However, a 2012 Yale study by Dan Kahan attempted to find such a correlation between lack of scientific literacy and perception on climate change risks, and could not find one. The more scientifically literate their participants of the survey were, the more polarized they were in their concern over climate change, demonstrating that lack of scientific literacy did not result in less concern. Instead, the researchers attributed the polarization in public opinion to a much deeper distinction: whether or not participants followed a more egalitarian set of ethics, asking questions about concern over income, sexual and racial inequality, or a more individualistic and hierarchical approach, such as desiring less government regulation. The results were clear – those aligning as an egalitarian had more concern for climate change, while those that care more for their personal interest had less concern. The same research group conducted a similar study in 2010 in an attempt to answer the following question: why do people say they believe in science but simultaneously refute scientific consensus and facts? In order to understand why, the study showed participants images of various experts and researchers on gun control, nuclear waste and climate change and polled people on their responses based on their political party. For the gun control example, Republicans were more likely to believe research which indicated a state with a concealed carry license for guns would have less violence, while Democrats were more likely to believe the opposite. When research is presented that points the opposite of their views, participants from both parties viewed the research as ‘untrustworthy,’ showing the real reason why people simultaneously claim they believe in science but deny the reality of climate change cause. The researchers attributed this to a cultural cognition and identity protection risk, where people process new information based on its consistency with their prior knowledge.

Climate change, and whether its cause is anthropological or not, has become a political identity issue to most people, not a scientific one. When a political candidate tweets statements such as ‘The concept of global warming was created by and for the Chinese to make the U.S. manufacturing non-competitive,’ as per Donald Trump, it’s difficult to tell yourself he may be right, or he may be wrong, depending on whichever position you agree with.

The problem here is this is not a social issue, whatever you believe has no relevance on the matter, it is not an “I believe” issue, there is only one position which is correct and which matters: the scientific consensus. It can be difficult to understand this, especially considering that newly appointed Environmental Protection Agency chief Scott Pruitt denies that carbon dioxide is a primary contributor to climate change. Yet a series of publicly released emails show that indeed he had a lengthy relationship with fossil fuel companies and lobbying groups such as Devon Energy as Oklahoma’s Attorney General, objecting to regulations on fracking and methane gas emissions. There is a form of cognitive dissonance at play here where many people are unable to separate their political party from who they are, and holding their party to a standard of absolute truth.

The belief of an individual should not carry more weight than the scientific consensus of the entire world, yet with political agendas we have ended up with half of partisan Western countries discrediting science. The transition from religious identity to political identity as a source of rejection to science is deeply troubling for the future. We must each eventually hold ourselves accountable to place science on a higher pedestal than belief, especially when the room for error could very well mean dire consequences on the lives and wellbeing of millions of people around the globe.