Can political athletes save us?

On taking a knee and potentials of sports activism 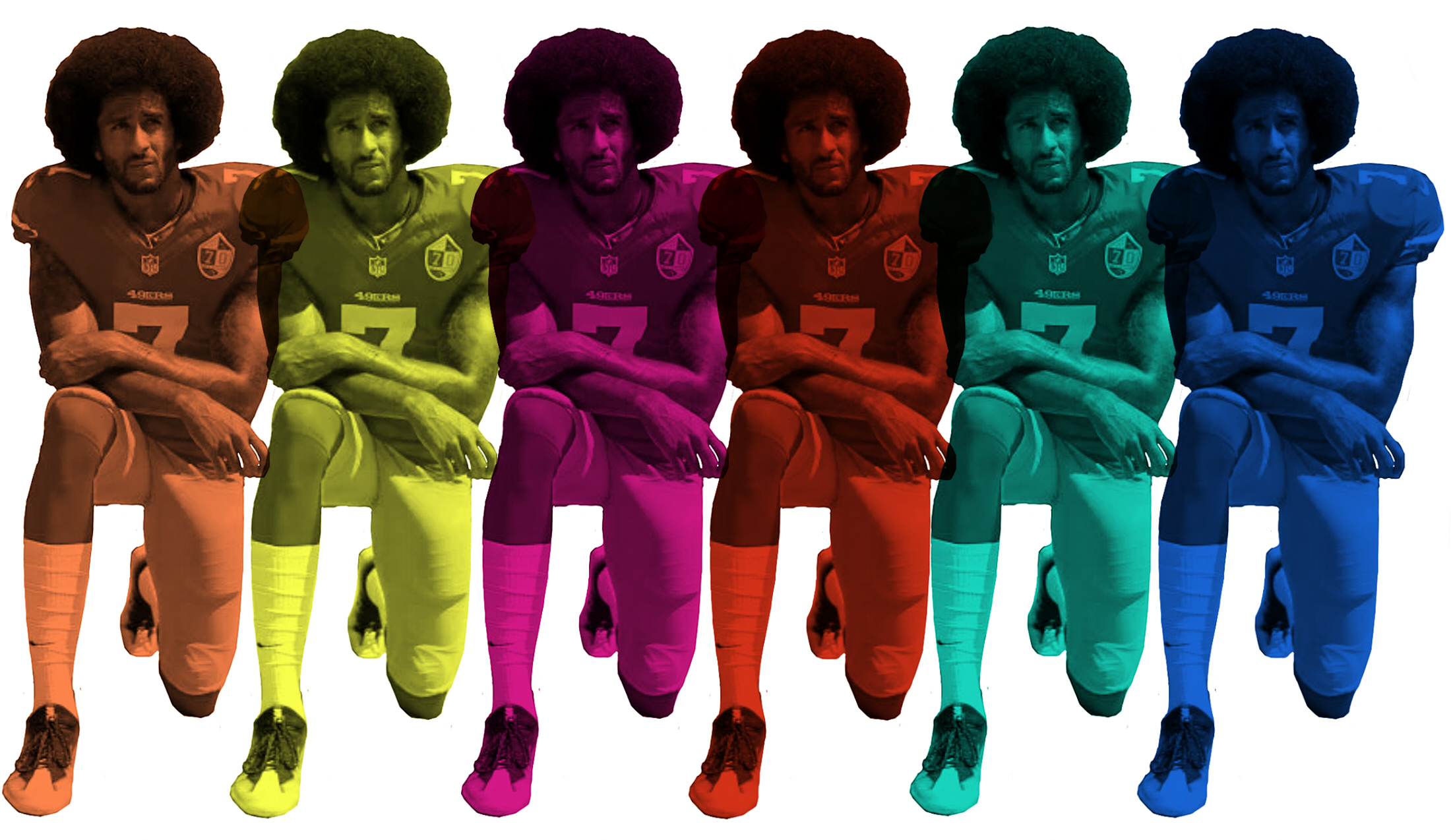 During the 1995-96 NBA season, the Denver Nuggets’ star athlete, Mahmoud Abdul-Rauf, refused to stand when then U.S. national anthem was played before his sporting events. Abdul-Rauf, a Black Muslim, asserted that the anthem was a symbol of the United States’ racist and oppressive history. Islam called for standing against all forms of injustice, he said, and he could not contradict his faith by standing to honour the flag.

Soon, the NBA suspended Abdul-Rauf without pay, and the Nuggets traded him. By the time he was 29, Abdul-Rauf was unable to secure a regular roster spot and his NBA career was over. Several years later, Abdul-Rauf’s home was burned down by an arsonist. White supremacists had previously spray painted “KKK” on a sign near the house.

Twenty years later, the world of sports continues to struggle with and resist accepting its political nature. Last year, San Francisco 49ers quarterback Colin Kaepernick’s decision to take a knee during the national anthem attracted considerable attention within and outside sports media.

“Kaepernick’s decision was only the latest incident in a whole generation of athletes who refuse to just shut up and play.”

“I am not going to stand up to show pride in a flag for a country that oppresses Black people and people of color,” Kaepernick told NFL Media in August. “To me, this is bigger than football and it would be selfish on my part to look the other way. There are bodies in the street and people getting paid leave and getting away with murder.”

Drawing inspiration from Black Lives Matter, Kaepernick called for an end to police violence against Black people and announced plans to donate $1 million to anti-racist organizations.

The potentials of sports activism

“Kaepernick had a different kind of effect, a different kind of a reach, an electric effect more than anything we’ve seen in recent years,” said Dave Zirin, The Nation’s sports editor, at a February 17 panel titled Taking a Knee, Taking a Stand that took place at Concordia. “And it’s not because he kneeled but because of the content of what he said.”

Indeed, from dozens of NFL, NBA and WNBA athletes, to soccer players and swimmers, to the entire football team at a San Francisco high school, Kaepernick’s actions have sparked a wave of subsequent demonstrations, with players across the U.S. taking a knee.

This series of protests has secured coverage even from what Shireen Ahmed, writer and activist, called the “mayonnaise factory” of mainstream sports journalism, dominated by white male writers. At the Concordia event, Ahmed noted an example: ESPN has launched a weekly feature documenting NFL athletes kneeling during the anthem.

“The burden that [marginalized athletes] inherit to humanize themselves on top of being competitive athletes is already hard enough.”

As noted by Zirin, the wide media coverage, as well as the sheer magnitude of the public backlash against Kaepernick, demonstrates that white people are engaging with the realities of police brutality on an entirely new scale.

“I call it the power to puncture privilege,” Zirin explained, speaking of the impact of athlete activism, “because […] it brings [anti-oppressive] ideas into spaces where people have the luxury to not think about Black Lives Matter, or LGBTQ issues, or rape culture on college campuses.”

Sports activism and solidarity across borders

Due to sports’ global and far-reaching nature, one of the biggest advantages of athlete activism is its potential to contest systems of oppression across borders. In February, six NFL players boycotted a fully subsidized trip to Jerusalem organized by the Israeli government. The purpose of the trip, according to an Israeli government official, was to fight the Boycott, Divestment and Sanctions movement and the general “delegitimization of Israel” through hosting “influencer and opinion-former” Americans, like athletes, in Israel.

“One of my heroes has always been Muhammad Ali. I know that Ali always stood strongly with the Palestinian people, visiting refugee camps, going to rallies, and always willing to be a ‘voice for the voiceless’,” said Seattle Seahawks player Michael Bennett in a statement, becoming the first to boycott the tour. “I want to be a ‘voice for the voiceless’ and I cannot do that by going on this kind of trip to Israel.”

Like Kaepernick’s kneeling, Bennett’s refusal to legitimize a symbol he saw as unjust — in this case, a publicity trip to Israel — demonstrates the power of sports activism in shaping a more just political future.

Bennett is not the only athlete to cite Ali as an inspiration. The legendary boxer and activist has also influenced the activism of Abdul-Rauf,  Kaepernick, and Bennett. A Black Muslim, Ali risked his life and career to speak out against institutional racism and imperialism during the 1960s and 70s, becoming particularly well-known for his vocal opposition to the Vietnam War.

Bennett also cited John Carlos, one of the athletes raising a fist in a Black Power salute at the 1968 Olympics. Bennett quoted Carlos in his statement as saying, “There is no partial commitment to justice. You’re either in it or you’re out.”

The tradition of Black athlete activists — Ali, Carlos, Abdul-Rauf, Kaepernick, Bennett— who draw upon each other is why, at the Concordia event, Zirin cautioned against simplifying athlete activism to a particular political moment.

“It’s a big mistake to say the renaissance of political athletes is because of Donald Trump, just as it would be a big mistake to say that this renaissance of political athletes is only happening because Colin Kaepernick took a knee,” Zirin said. “Kaepernick’s decision was only the latest incident in a whole generation of athletes who refuse to just shut up and play.”

Shouldering the burden of activism

Speaking about Ibtihaj Muhammad, a Black Muslim woman and a fencer on Team USA who was detained by U.S. Customs, Ahmed challenged the tendency in social justice movements to place the burden of activism on people who are already marginalized.

“Is it fair to ask Ibtihaj Muhammad […] to keep pushing for more? Do I expect [marginalized] athletes to take a stand? [Movement leaders] are the most underpaid and overworked in society. They mobilize and organize and realistically is it fair to ask them to do more?” Ahmed said. “Absolutely not […]. The burden that [marginalized athletes] inherit to humanize themselves on top of being competitive athletes is already hard enough.”

Ahmed also gave the example of former Montreal Canadiens and current Nashville Predators defenceman P.K. Subban. Subban, a Black man, was frequently derided as “cocky” and “selfish” during his time in Montreal even though he donated tens of millions of dollars to charitable causes in the city.

“I’ve never seen a Black athlete or a Muslim woman or a trans athlete that has said to me ‘let’s not talk about politics in our sports.”

While we should not expect marginalized athletes to engage in political action, Ahmed said, we ought to support them and amplify their voices if they do choose to engage. As some object to “making sports political,” Ahmed noted, “[Privileged people] who actually say that are ones who don’t have to deal with issues like class, gender or race.”

“Because I’m sorry but I’ve never seen a Black athlete or a Muslim woman or a trans athlete that has said to me ‘let’s not talk about politics in our sports.’ Never happened,” she continued.

At the end of the day, sports do not take place in a vacuum. By capitalizing on the potentials of sports, political athletes from Ali to Kaepernick have put their bodies on the line in order to contribute to the broader fight against injustice.