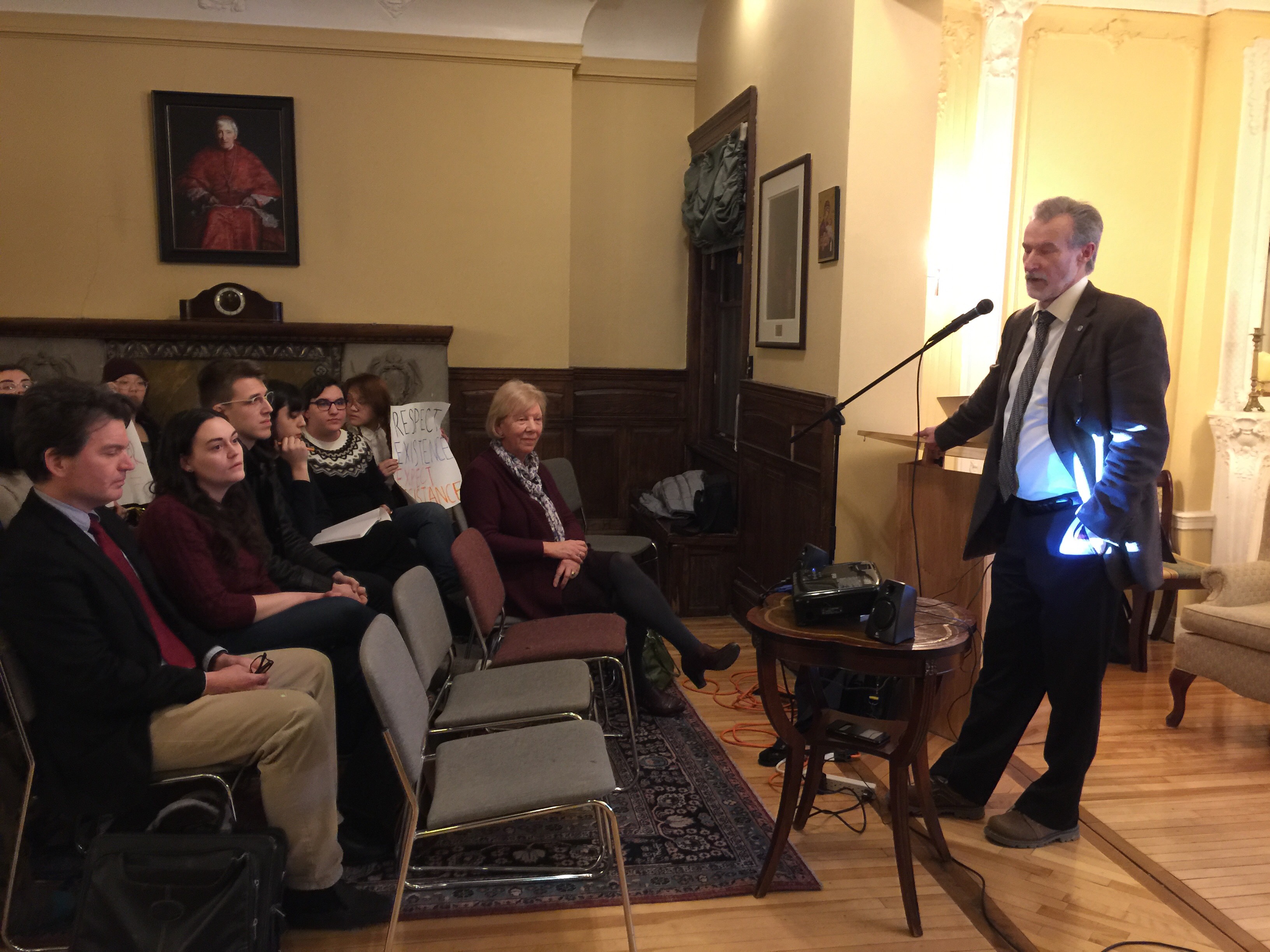 Approximately thirty activists, many of whom identify as trans and are members of either Queer McGill, QPIRG McGill, and/or the Union for Gender Empowerment (UGE), protested the event, holding signs that read “Respect existence or expect resistance” and “We’re here, we’re queer,” and challenging the speakers during their presentations.

McQueen has previously referred to gender dysphoria as a “condition” – a term no longer used, due to its insinuation of trans identity being a mental or physical illness – and has argued against the use of pre-puberty hormone blockers for transgender youth.

Farrow penned an essay denouncing Canada’s Bill C-389, which would have made crimes committed against people based on their gender identity a hate crime. In it, he wrote that “gender identity and gender expression are not actually positive or constructive additions to the prohibited grounds of discrimination. Rather, they constitute a deliberate attack on one of the existing grounds: sex.”

Prior to the event, many community members had voiced their discomfort on the event’s Facebook page: “Can you please explain why you’re hosting an event about transness featuring two non-trans, and actually highly transphobic, speakers? And literally no trans representation?” asked Lucie Lastinger, a U2 Women’s Studies and Anthropology student and a representative of the Union for Gender Empowerment.

“Can you please explain why you’re hosting an event about transness featuring two non-trans, and actually highly transphobic, speakers? And literally no trans representation?”

“The kind of ideology embodied by this event’s speakers rejects the lived experiences of trans people, and enacts violence against trans communities by producing and reinforcing a culture that views trans people as medical and psychological anomalies, instead of real people,” wrote Benjamin Oldham, a U2 Linguistics student. “This kind of hateful ideology has no place on McGill’s campus.”

After concerns voiced on the event’s Facebook page, Raphaële Frigon, the outreach coordinator at QPIRG-McGill, Michelle Li, a student from Queer McGill, and Lastinger met with the executives of the NCSS in the morning before the event.

Though the NCSS was unable to cancel the event, they changed the format of the event to include time for questions from the audience, and later chose to dissociate themselves from the event.

Farrow began his presentation with a quote from the writer G.K. Chesterton: “For the next great heresy is going to be an attack on morality – and especially on sexual morality.” He then began to describe the case of Eva Tiamat Medusa, a transgender woman, at which point Lastinger asked, “so why are you using ‘he’ pronouns?”

When Farrow repeatedly refused to answer the question, multiple protesters continued to request that Farrow use the correct gender pronouns, at which point McQueen joined what had quickly escalated into an argument, saying that “there’s no such thing as the wrong pronouns.” When the protesters expressed dissent at this statement, McQueen replied “Well, how many pronouns are there on Facebook, to cover everything?”

“The kind of ideology embodied by this event’s speakers rejects the lived experiences of trans people, and enacts violence against trans communities by producing and reinforcing a culture that views trans people as medical and psychological anomalies, instead of real people. This kind of hateful ideology has no place on McGill’s campus.”

“You don’t have the vocabulary to talk about trans people, and you’re acting like an expert,” said Frigon.

One member of the audience asked Farrow, “would you please just use ‘they’ in order to keep them [the protesters] quiet?” to which McQueen responded “No, we don’t have to do anything.”

“You can either be silent, or you can leave,” said Farrow. When protesters continued to ask questions, Farrow retorted, “Okay, so we will wait for the police to arrive and escort you out.”

“Are you really that afraid of dialogue? Are you afraid of trans women?” asked Frigon.

After about ten minutes of heated debate, Farrow continued his presentation, with the activists calling out “she” when Farrow repeatedly misgendered multiple trans women as “he.”

Farrow’s presentation focused on how what he called “gender ideology” – acknowledging gender and sex as separate – has made its way into educational systems and human rights legislation. “This is the ‘self-indulgent madness’ of which Chesterton spoke,” he said. “It seems to me that we have seen a profound attack on objective value in the time in which we live.”

“Are you really that afraid of dialogue? Are you afraid of trans women?”

McQueen’s presentation, which followed, focused on Catholic schools’ “dealing” with transgender students. “Many psychiatrists call the ‘trans idea’ a delusion,” she said. “A fixation in our mind that doesn’t change is a delusion.”

In response to objection from the crowd, she countered “don’t mistake ‘delusion’ as a pejorative term; it’s a psychiatric definition.”

The Merriam-Webster dictionary’s definition of “delusion” is “the act of tricking or deceiving someone.” When used in the context of psychiatry, it is “a persistent false psychotic belief regarding the self or persons or objects outside the self that is maintained despite indisputable evidence to the contrary” – both of which are pejorative, and neither of which is accurate to describe trans people.

McQueen spoke about responses to trans minors, expressing resistance towards or outright rejecting the use of puberty blockers or gender-affirmation surgery, saying that “the surgery is ineffectual in the sense that what’s created does not work reproductively,” to which protesters objected that genitals’ sole purpose is not reproduction. Instead, she advocated for the use of “psychotherapy as a treatment for trans identity.” One activist retorted, “If you’re talking about conversion therapy, that’s a form of abuse.”

“If you’re talking about conversion therapy, that’s a form of abuse.”

During the half-hour reserved for questions, many activists objected to the poor scholarship of Farrow and McQueen, counter-referencing studies that supported the use of puberty blockers for transgender youth, and which showed that transgender children supported in their identities show positive mental health.

Farrow was asked about Jordan Peterson, the notoriously transphobic University of Toronto professor who refuses to use gender-neutral pronouns because he believes there is “no evidence” that non-binary people exist.

The event ended with the activists thanking the NCSS for deciding to dissociate from the event.

“I cannot condone their refusal to acquiesce to really basic and simple requests, such as honouring someone’s pronouns and not misgendering people – it’s just a matter of human decency,” a member of the protest, who wished to remain anonymous, told The Daily after the event.

“Obviously, they were not listening to the trans members of the audience, which leads me to believe that they don’t listen to trans people in general.”

“While I respect the purpose of this event, and their presenting an alternative perspective – with which I’m familiar, having been raised Catholic and also being trans – I, however, cannot condone bad scholarship in the presentations,” he said. “Several times Wikipedia was cited as a source which, as we all know from high school, is not acceptable.”

“I cannot condone their refusal to acquiesce to really basic and simple requests, such as honouring someone’s pronouns and not misgendering people – it’s just a matter of human decency.”

The NCSS executive has asked the UGE, Queer McGill, and QPIRG-McGill to collaborate on an event, to take place in March, featuring a panel of trans people talking about their experiences with Catholicism.