Of whips and wheels

Montreal derby women are on a roll 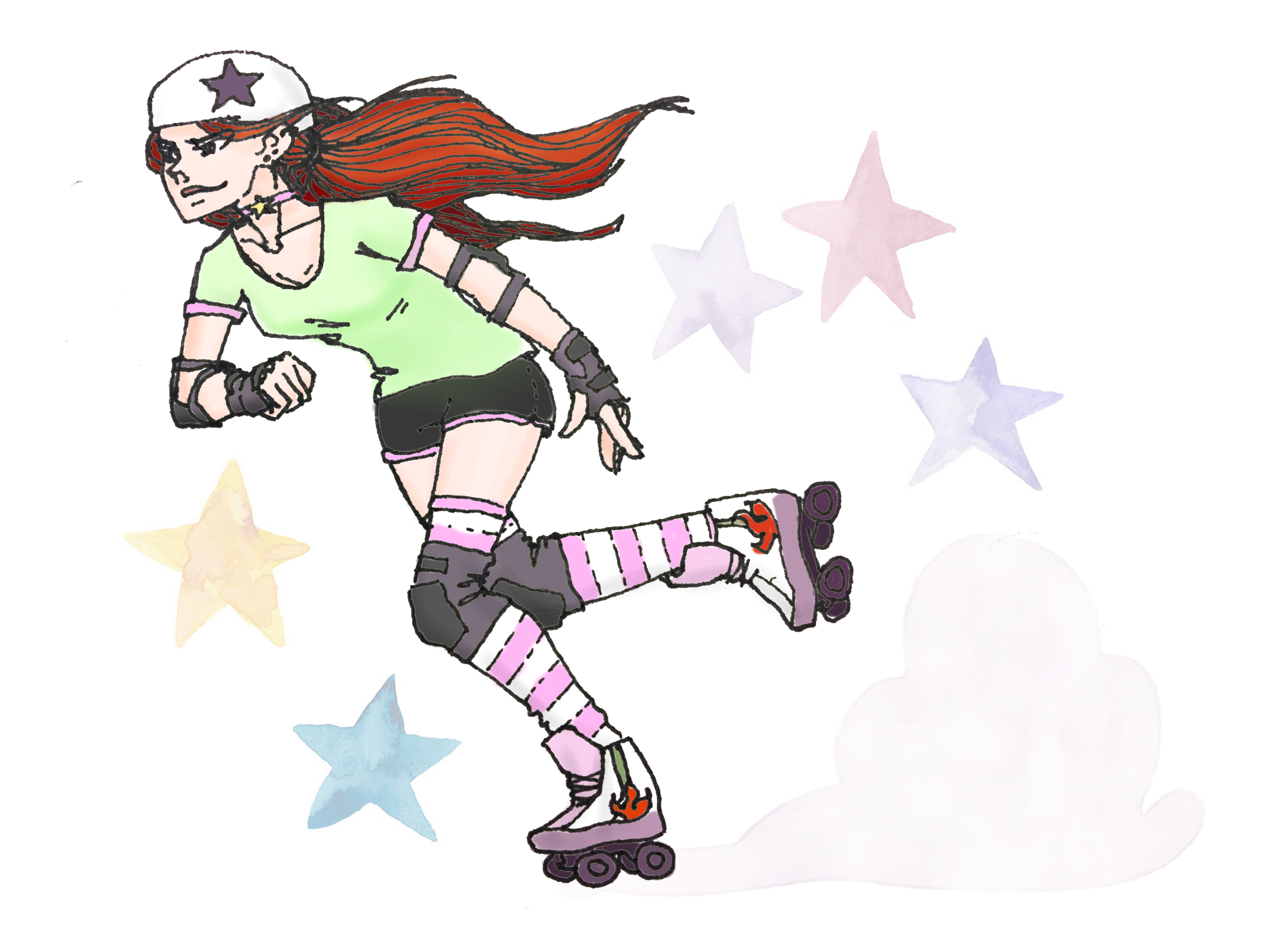 “A lot of people don’t know what [roller derby] is, and a lot of people think it’s like really badass and we are just beating each other and ripping each other’s hair and stuff,” Julia Rodriguez, a fourth year McGill student and a former member of Montreal and Denver’s roller derby leagues, told me over tea. Until recently, my only knowledge of derby came from the 2007 classic Whip It!, which I had only really seen because of my closeted crush on Ellen Page.

It took three years in Montreal for me to finally explore the derby scene. My only regret is waiting so long to do so. 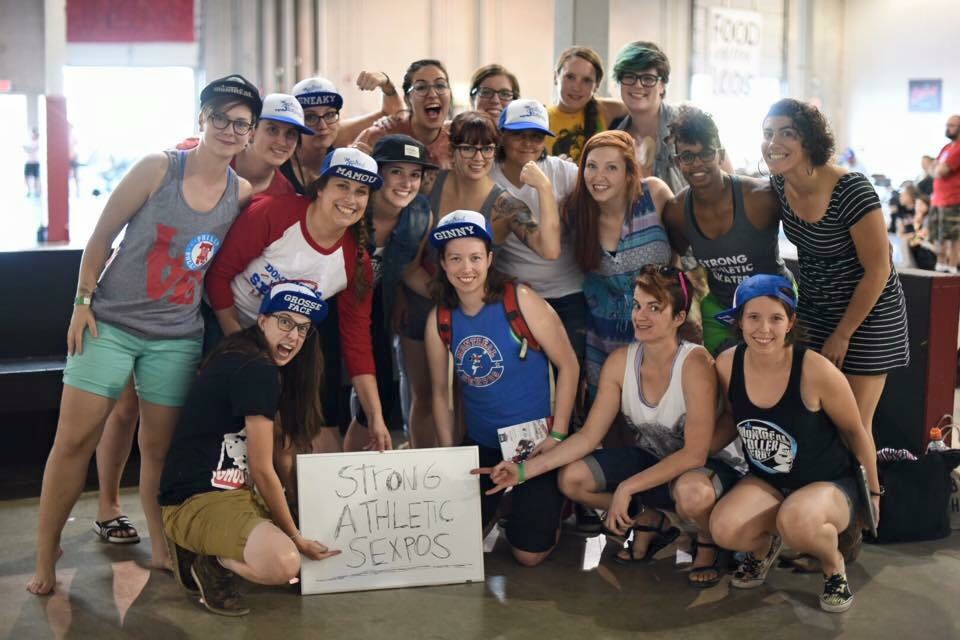 I had heard that, in Montreal at least, derby culture is imbued with a feminist and queer vibe, and I had to see it for myself. “It’s not reflective of every individual or every league,” Rodriguez said of the assumptions of queerness often attached to derby players, “but it definitely rings true for this league.” In terms of structures, rules, and community dynamics, she said, “derby is basically like a sorority of athletic queer positivity, which is great!”

My first derby experience wasn’t disappointing. The match was hosted by a drag queen, the players were unapologetically rough and determined, the beer was cheap, and the spirit itself was both competitive and lighthearted. “I’m not sure how it developed in this way,” Rodriguez said, “but the values associated with derby are community, acceptance, and general positivity.”

“A lot of people think [Roller Derby] is like really badass and we are just beating each other and ripping each other’s hair and stuff.”

“Most women’s sports are watered-down versions of the men’s sports, whereas derby is like kind of the opposite,” Paula Youwakim, a current member of the Montreal league, told me. Unlike other female-dominated sports, such as figure-skating or volleyball, derby is a contact sport. “Women’s derby is so much more popular than men’s and it’s just as physical, just as tough,” Youwakim added.

Roller derby, however, wasn’t always like this. Originally part of an endurance sports craze in the twenties, roller derby used to be a long-distance race lasting several days that followed imaginary routes across the U.S.. Participants skated laps that were equal in distance to these routes. Much like a relay race, skaters would switch in and out when exhaustion hit them, and if a team could not complete this distance, it was eliminated.

“Derby is basically like a sorority of athletic queer positivity, which is great!”

Governed worldwide by Women’s Flat Track Derby Association (WFTDA), the roller derby we know today is a result of a revival in 2000 in Austin, Texas. Physical contact is permitted, and the scoring system rewards teams for overtaking opponents. Up to five players from each team play in each two-minute round called a ‘jam.’ Each team selects a ‘jammer’ to score points by lapping members of the opposing team, and a ‘pivot’ to block the opposing team’s jammer. If the jammer in the lead wishes to end the jam before the two minutes are up, she taps her hips, and the game moves on.

Overall, WFTDA and the associated leagues have worked to create an inclusive and friendly culture and environment for all players. “I once went to a training camp close to Boston and they told me, ‘do you wanna stay over with someone here so you don’t have to pay for hotels?’ We are competitive on the rink, but as soon as the game ends people are like, okay let’s go out for drinks!” Youwakim recounted. Rodriguez added that, “you can even drop in on other leagues’ practices, so the system is really flexible. If you wanna skate somewhere most places will let you.” 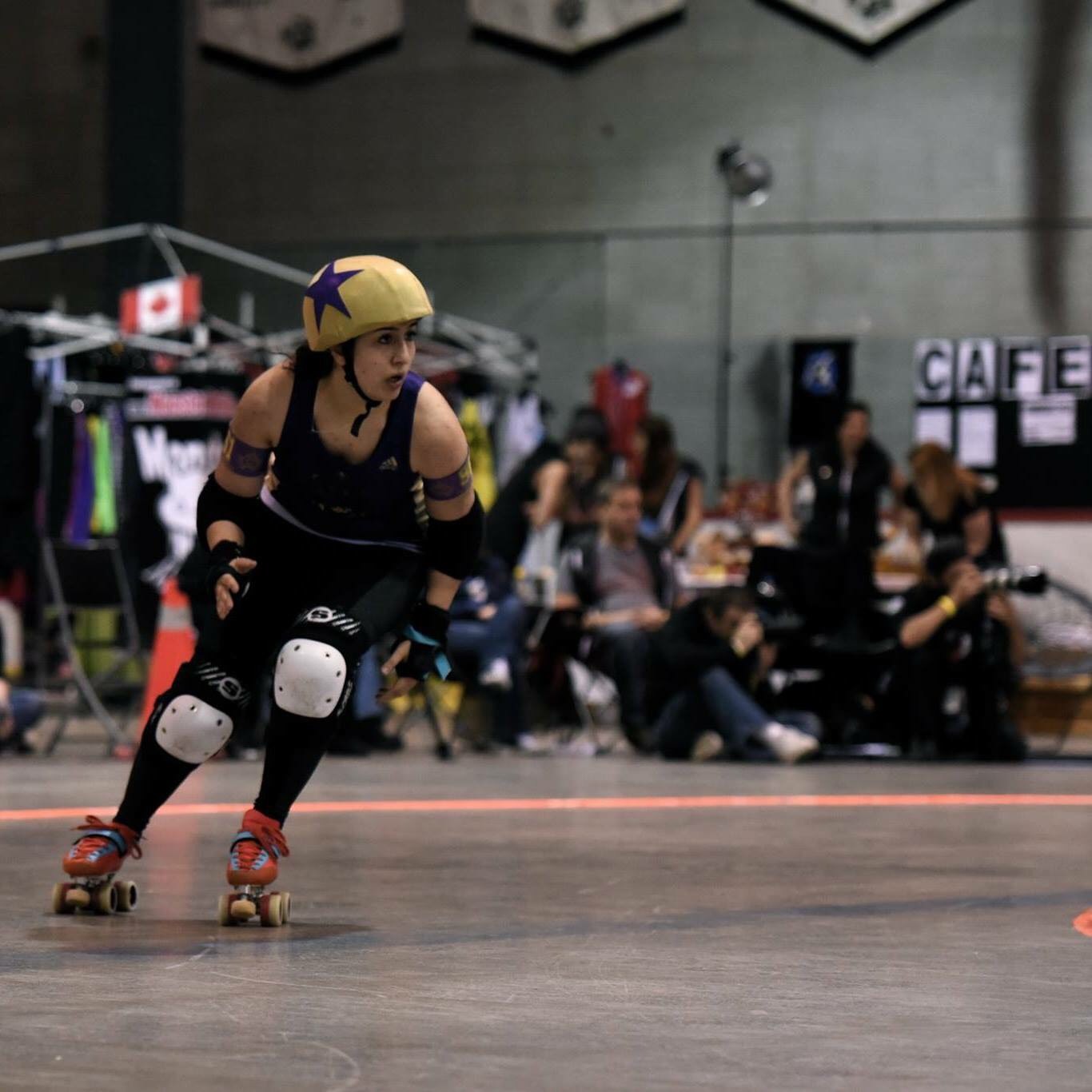 Women’s sports, by and large, suffer from a lack of sponsorship and funding. As a growing sport that has remained largely mysterious in popular culture, roller derby can be financially inaccessible to current and prospective players. Although the games often draw large crowds, the Montreal league is primarily funded through participants’ dues. In Montreal, players essentially run the league: be it coaching, refereeing, or organizing events, the league is the result of the players’ voluntary labour. For league members, the bare minimum of attending practices can amount up to ten hours a week, and you can be placed on probation if you can’t make 75 per cent of practices. The players may be dedicated, but “at the same time,” Youwakim said, “you can’t live off of derby.”

Echoing Youwakim’s sentiment, Rodriguez added that, “[derby] is an expensive sport to play. Equipment is really expensive as an upward investment […] You have to do maintenance on [the skates] and buy different wheels. I’ve gone through four different kneepads until I found the right ones.”

The lack of funding, Youwakim said, could explain why the growth of the sport has been so strained. “A lot of leagues don’t have the people to train them or they don’t have access to the equipment and it’s really expensive,” she said.

Founded in 2006, the Montreal league comprises of around 150 members. It is the first derby league in Canada and the first non-American league in the WFTDA. Seasons run November to August for home teams, and to playoffs – often in September – for travel teams. “A lot of teams in Canada look up to Montreal, because we’re also the biggest league in Canada,” Youwakim told me.

“Canadian derby just isn’t as well developed as in the States. It just hasn’t been played here for as long.”

Last year, Montreal Roller Derby hosted the International Championships playoffs. Montreal’s “A” travel team, “The New Skids on the Block” (or just “The Skids”), became the first Canadian team to make it to the Championships, but lost 116-217 to Angel City Derby Girls, and was eliminated early-on. Regardless of the defeat, Rodriguez was optimistic about Montreal’s success, “At least they made it,” she said. In defense of the Skids, she added, “Canadian derby just isn’t as well developed as in the States. It just hasn’t been played here for as long.”

Another distinguishing factor of roller derby is the players’ unique nicknames. Two of the players in The Skids, for example, are called Al K. Traz and Russian Cruelette. And let’s not forget Terror Me Suzie of Montreal Sexpos, the league’s “B” team, and “Hipsqueak of Les Contrabanditas,” one of the league’s home teams.

“Sometimes [nicknames are] given to you,” Youwakim, also known as Falafel la Gazelle, told me, “especially in Montreal, because you go through bootcamp for three months and you don’t have a name when you start, it’s either something you choose or you get. Sometimes after that three month experience we already have a name for someone and it’s like ‘okay, you can’t change now, this is what we’ve been calling you for three months […] It’s just a fun thing.” 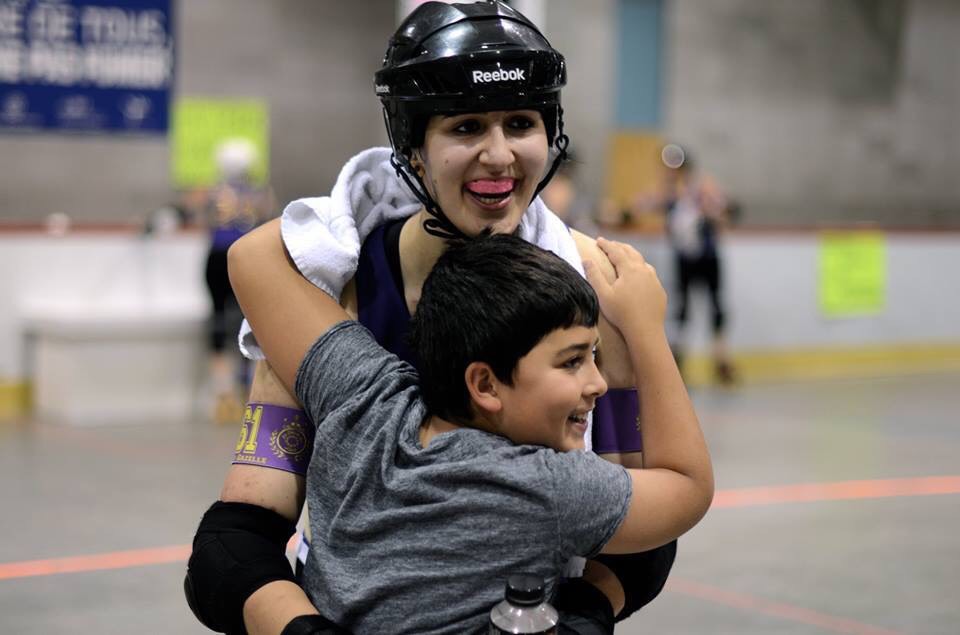 Falafel la Gazelle and her brother

Racially, roller derby is often a white-dominated space. As the only Arab person in the Montreal league, Youwakim said that the Montreal league’s lack of racial diversity can be an effect of self-perpetuating social networks. “I don’t think the [Montreal] league has made the effort of going and reaching through other communities to try and bring in other people,” she added.

Still, derby can be diverse in the types of people you meet. “You meet super young people from the juniors, you have like 45 year old moms […] you have students, you have doctors, you have designers. You have everyone,” said Youwakim. Overall, Rodriguez added, “If you can skate it doesn’t really matter who you are or what you are, you can do it.”

Both Youwakim and Rodriguez told me that the community they have built through derby has been important to them. Having gone to Catholic school, Rodriguez said that, “It was really cool as a teenager to be around people who were like, ‘no, you’re unique,’ and encourage that. [Within derby] I was meeting people who were more like me in the sense that we were weird. Everyone was different, and no matter what you wanted to be you could be that. The community was bonded by the fact that we liked the sport.”

Developing sports, especially derby, often have to modify the rules regularly, and with new rules each year come new strategies and new injuries. Last year, Youwakim said, rib injuries were widespread in the league. Rodriguez added, “At first it was just fun, party, get kind of drunk, skate, and hang out. I think as the sport has become more serious, the community is focused on equipment being approved and concussion prevention. But I also I think this came a little late.”

For those wishing to participate in roller derby, keep in mind that Montreal Roller Derby is especially tricky to get into. Rodriguez explained that, “People who are perfectly capable skaters sometimes don’t get in, which is a bummer.” This is partially because, as Youwakim elaborated, the league’s expansion could make its management very difficult: “The bigger the league, the more complicated and bureaucratic it gets.” 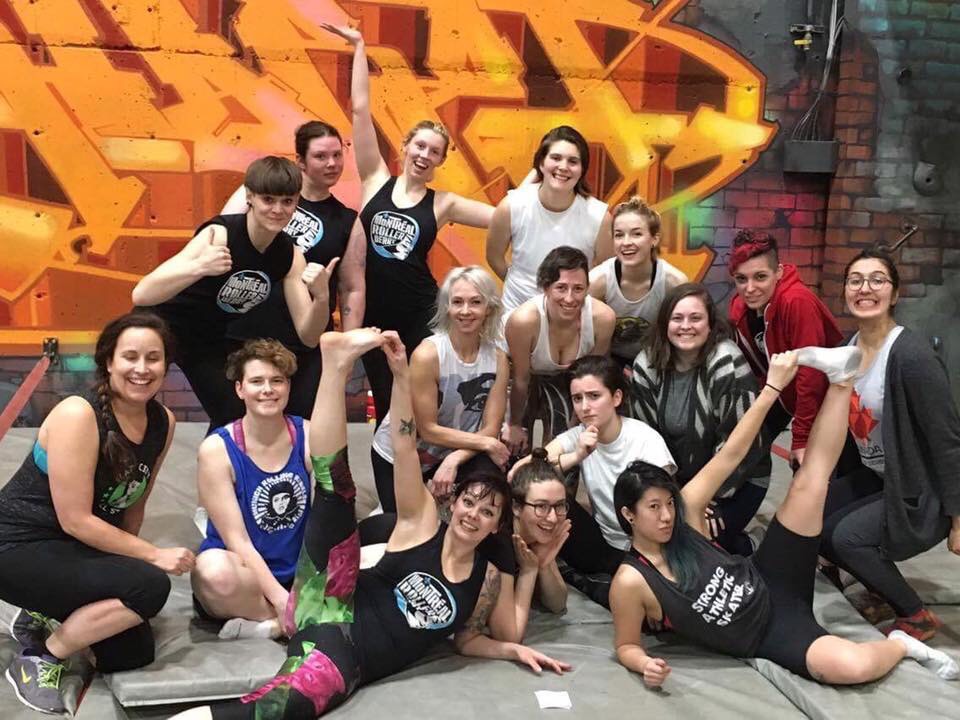 The mandatory rookie bootcamp takes place in August for three months. There are five tests: four on skills and one on the game’s rules. If you pass, you are officially in the league, but not necessarily on a team, as drafting takes place later. Also, those planning to leave Montreal can still join the Montreal league and ask for a transfer to another league later. As Youwakim told The Daily, however, people can show up on Mondays to the rink and often have the chance to rent equipments. She said, “Usually people start training before bootcamp, so come Mondays, there’s always people to help.” Men and children can also try roller derby through La Ligue Montréalaise de Roller Derby Masculin or the Montréal Junior Roller Derby.

Age-wise, anyone who can skate and play is welcome to try out. “Most people stop playing sports at a certain age, like when they leave university and it’s not available to them,” Rodriguez told me. “I haven’t played in a while, but I always feel like I can go back at any time.”