An exploration of resilience 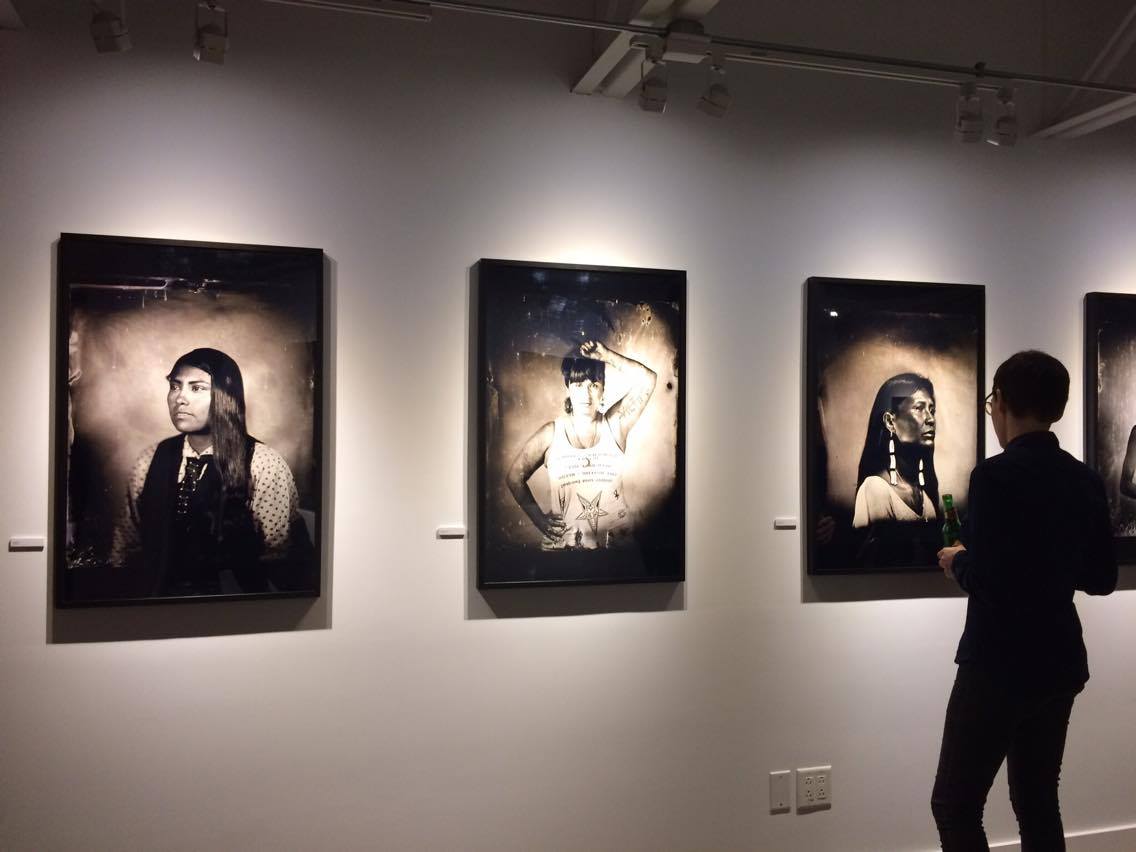 Located near Jean-Talon Market, Never Apart is a non-profit gallery with a powerful vision of bringing social change and supporting local communities through the arts. The gallery’s winter 2017 vernissage, held on January 26, celebrated Black and Indigenous heritage. The exhibitions included a multitude of narratives from Canadian and non-Canadian artists focusing on issues such as resilience, identity, displacement, and surveillance.

The ground floor displayed Sandra Brewster’s “Assemblage,” which consists of several photomontages exploring the anonymity and generalization imposed on black individuality. The collages consisted of silhouettes called “Smiths” made out of cutouts from a phone directory listing “Mohammeds.” Often, the silhouettes were coated with white paint, and sometimes with black paint, obscuring the content. Untitled Smith (White Out) and Untitled Smith (Black Out) were positioned against adjacent walls in such a way that the viewer had to walk over to see each piece in isolation, even as the titles referred to each other. Brewster’s exhibition demands serious contemplation from its viewer on the stereotypical notion of monolithic Black communities, humouring the idea that all Smiths or Mohammeds are related.

In the small theatre next to the main gallery, a short film by Akosua Adoma Owusu played on loop. The black and white film Reluctantly Queer showed a young diasporic Ghanaian individual going about a restless day while a letter to their mother is narrated in the background. The letter exposes a conflict between being queer and being with family in Ghana, where homosexuality is politically controversial. The film resonates strong and conflicting emotions of displacement and identity. Similarly, artist Mikael Owunna’s “Limit(less)” depicted the lives of African immigrants in documentary-style photography, navigating aesthetically the space between being diasporic and being queer. Josué Azor’s “Erotes: Love, Sex, Magic” took a spin on this angle, exploring the LGBTQ culture in Port-au-Prince, Haiti. Owunna and Azor’s pieces, exhibited across each other in the same room, conveyed a sense of intimacy in the way the photographers portrayed their models.

Owunna and Azor’s pieces were in contrast to Kali Spitzer’s “An Exploration of Resilience,” which blurred the lines between intimacy and detachment. Spitzer’s exhibit took up most of the upper gallery with portraits of Indigenous and mixed heritage people from the artist’s own community, celebrating their expressions of resilience. Using traditional stylistic techniques of portraiture, Spitzer challenged the voyeurism associated with representations of Indigenous communities in mainstream media. Each portrait exhibited the personality of the subject, incorporating props, poses, tattoos, among other elements. While each portrait carried a strong sense of self, thereby addressing the viewer intimately, it was the same element that also detached the viewer from the artwork. The viewer was not the agent in comprehending these portraits because each subject’s understanding of themselves was secure enough to resist any exterior interpretation. In this way, the artist subverts the gaze on these portraits and the communities from which the portrayed individuals come from in a collective act of resilience.

Mikael Owunna’s “Limit(less)” depicted the lives of African immigrants in documentary-style photography, navigating aesthetically the space between being diasporic and being queer

The night concludes with Dries Depoorter’s “Jaywalking” in a small room of the upper gallery. The digital art installation combining private data of the artist and other strangers walking across a street light. The installation contains a red buzzer which the viewer can press in order to report a jaywalker to the police. The artwork confronts the viewer with the violent nature of surveillance and policing in contemporary society. In the backdrop of Black History Month, this artwork takes up new meaning, antagonizing issues of surveillance disparity subjected to Black and Indigenous communities.

Finally, we must recognize and celebrate the contributions of curator Andy Williams, who was able to depict the multifold layers of being Black and/or Indigenous. Independent projects like Never Apart’s exhibitions highlight the need to create spaces for marginalized groups to tell their stories in their own way. As opposed to larger commercial galleries and museums in Montreal where the majority of curators are white men, Williams’ exploration of Black and Indigenous identities through young and contemporary artists is refreshing and vital.