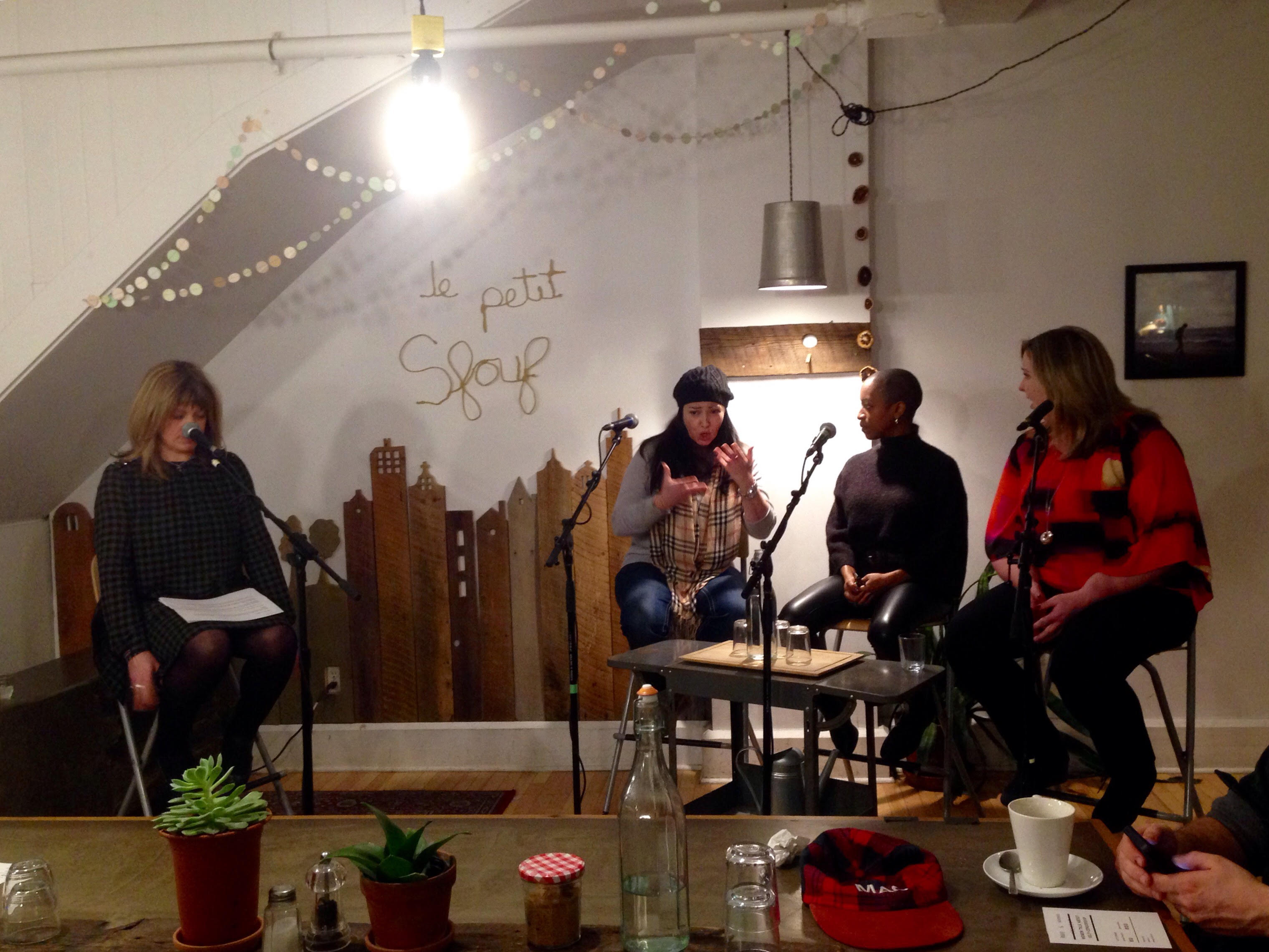 On Wednesday January 11, a salon-style discussion about women’s experiences with self-silencing was organized by Imago Theatre, in partnership with Béatrice Média, at Cafe Sfouf, an intimate venue welcoming approximately thirty people.

Hosted by Rebecca Munroe, a radio host at CJLO – 1690AM, the talk featured three panelists: Dominique Pirolo, a Talent Acquisition Specialist for the German multinational software corporation SAP; Tracey Steer, a writer and blogger whose work has appeared in Today’s Parent and Reader’s Digest; and Christina Vroom, the Associate Director of University Advancement at McGill’s Faculty of Dentistry.

The panel discussion accounted for the first part of the event, in which the panelists explored when and why they censored themselves. Following this, audience members were invited to share their own experiences of self-censorship. Eventually, the conversation progressed into a collective exchange of strategies to combat the entrenched structures that contribute to why women feel inclined to recede and self-silence.

The event was organized as part of the launch of Imago Theatre’s Intractable Woman, an upcoming production about Anna Politkovskaya, the only Russian journalist to have covered the war in Chechnya who was subsequently assassinated for her work. Imago Theatre described Intractable Woman as “a story about the inalienable right to freedom of expression.”

Speaking to The Daily on the importance of organizing such events, Jen Quinn, the Artistic and Administrative Associate of Imago Theatre, emphasized that media has a unique role to play in catalyzing dialogue.

“We always try to create a platform to empower,” Quinn said. “Part of the work that we do is always about engaging in conversation and making sure that it is a lateral conversation that anybody is welcome to participate in.”

Béatrice Média echoes a similar mission to “[spark] the kind of authentic conversation that boosts empathy and explores new ways of improving the female experience every day,” according to its website.

Munroe commenced the panel discussion by asking the panelists to think back to an experience when they felt as if they couldn’t speak up. The varied answers emphasized different silencing factors, such as family dynamics, gender expectations, and race.

Pirolo reflected on her childhood, citing the expectation of diplomacy as one of the reasons that she censored herself.

“I was a people-pleaser. Most girls want to please and be a people pleaser. So we’re not really thinking about forcing your opinion, you want to keep it peaceful, you want to fit in,” she said. “And then I started experiencing things later on that changed all that. Back then I was very quiet and now I’m very vocal. I object to everything.”

Vroom’s reflections similarly pointed to how the expectation of politeness and tact contributed to her self-silencing.

“With my two brothers, I felt very much like I needed to be the peacemaker in my family,” Vroom said. “I had an opinion but I didn’t know where it fit in or whether I should vocalize it […]. I didn’t like rocking the boat when I was younger. It made me very uncomfortable.”

Steer spoke of how being a Black woman influences her experiences with self-silencing. “I live in Westmount – and it’s a mostly white neighbourhood, and I’ve lived mostly among white people my whole life, it’s not a problem,” she shared. “But it’s also a strange little neighbourhood because I’ve been mistaken for the maid and the nanny all the time, and that never happened before.”

“There’s also something to be said about not wanting to be ‘that person.’ I don’t want to be the sort of person who’s always talking about race, or that angry Black woman,” she continued.

Steer further shared an instance of self-silence: “[I was] walking around with my kids, and my baby, and people would fawn over my son and a woman said to me once, ‘Is your husband Caucasian?’ and I said, ‘yes,’ and she said, ‘Oh he’s so beautiful, you’re lucky he has white features’.”

“The thing is, I knew she was trying to give me a compliment. I knew that,” she continued. “I was gobsmacked. There was that thing in my head that said, ‘say something.’ But I didn’t, because I didn’t want to make the situation uncomfortable for her. But those kinds of things have happened many, many times. And there’s nothing really that small about it.”

Vroom also spoke about the issue of not speaking up to make sure other people feel comfortable.

“One of these days I need to stand up to myself and draw the line and say, ‘This is our time together, this is what we will discuss, it will not go beyond those boundaries.’ I haven’t done that yet, and it’s been two years,” she continued.

“It’s like that expression pick your battles. And that expression has been used so often […]. And I agree with it because there are times when it’s not worth it, but at the same time, that’s a form of self-censorship. Why shouldn’t we say ‘that made me uncomfortable, that upset me,’ when that happens?” she elaborated.

The discussion concluded when Munroe asked the panelists about how they have progressed from self-silencing to freely communicating their thoughts and concerns.

The second part of the event involved an audience talkback in which people shared experiences and strategies for navigating difficult situations. Audience members expressed concerns over the talk’s perceived lack of attention on systemic structures of oppression that figure in why women are more inclined to censor themselves.

In an interview with The Daily, Rhiannon Collett, a playwright who attended the event, shared that she “felt that the conversation had been veering around the ghost of the actual problem.”

“A lot of the conversation was about moderating our opinions and behaviour in reaction to a system that constantly [tries] to get us down,” she said, ”so, the conversations around how to be assertive and not aggressive really frustrate me because what we’re actually talking about is a systemic problem.”

However, Ocean DeRouchie, Fringe Arts Editor for Concordia University’s student newspaper The Link still noted that “it was really nice to be able to talk in a room full of women, and just being able to hear their thoughts and experiences. As another woman working in media, it’s sometimes really hard to have your ideas heard and this is that reminder to keep kicking ass.”

Speaking to The Daily, the host Rebecca Munroe, shared DeRouchie’s sentiments: “When [an audience member] brought up the fact that when she was in high school, she was able to put up her hand and be very vocal in class, and in the moment she got to university she all of the sudden stopped talking, that resonated with me.”