On healing through sports 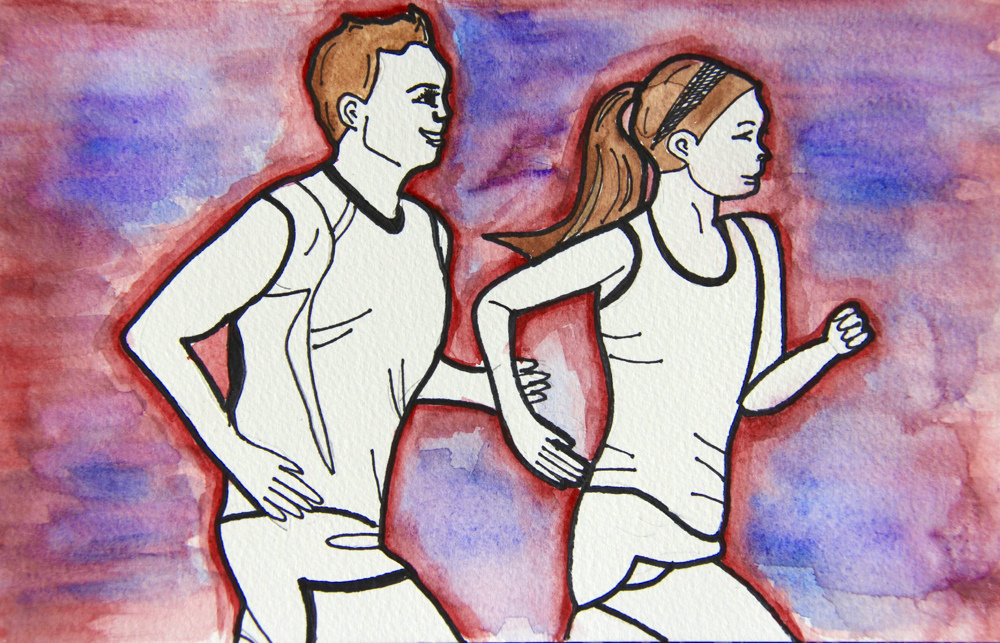 When everything goes wrong in our life, the body may be the only domain left that we can still control, shape, and care for. Being grounded in our bodies can be the only reliable and consistent link to the world outside of our heads. The body will always be there to remind us that, someday, we can – or may, or will be – whole again. For the inaugural piece of the section, we have dedicated this space to people’s understanding of the relationship between sports, their body, and trauma.

My primary motivation when I began running about six years ago was to lose weight. I did not realize that what I had considered a punishment had become a coping mechanism. For as long as I could remember I had participated in team sports, but my relationship with running was completely different. At first, the lack of rules, structure, and dependence had left me beyond frustrated. I blamed myself when it was difficult to run my target. Whenever I pushed a previous record, I was convinced that I wouldn’t be able to reach it again. Though I had been running regularly since I took up the sport, I never talked about it much to others. I was embarrassed that the amount of effort I was putting in did not produce results that were impressive, and considered myself a failure. Running didn’t help me with weight loss, but I continued running because it gave me the time I needed to calm down when I had kept too much in. Running became meditative. Whenever something happened that felt like change, the only response I knew was to run it out.

The abusive relationship I was in when I began running lasted a year and took the following year for me to process. Healing was, both literally and not, sprinting uphill, then jogging back down and sprinting up the same hill time and time again until I felt exhausted. It wasn’t until recently that I began to feel consistency and control in my relationships with people, as well as in exercise. I had made a conscious effort not to compare myself to other runners. I avoided running in any events, assuming that I would feel insufficient at something I loved. Though I was intimidated to compete in races, it had become such a large part of my life that I seemingly had little to show for. Last summer I began training for my first race, a full marathon. My original worry of insufficiency proved unfounded: when the race came in September, I cut my goal by fourteen minutes, finishing about an hour faster than the average for women.

—Victoria*
*Last name has been omitted.

From gymnastics to rugby, I have been involved with sports and athletics my whole life. Weight training, on the other hand, has been a new endeavour in a very foreign space. The gym does not have an especially inviting atmosphere: you are either being ogled or judged, and if not, then you are ignored, which leads to people impeding on your space. When I step into the gym, I have to confront all of my self-hatred issues, my social anxiety, and men’s tendency to make me feel even smaller than I already am. So it’s weird that this is the space where I found myself.

When I was depressed and no longer reading books, making silly art collages, or discovering new music, the gym was there to make me feel happier. When someone asked me what I like to do in my free time, I was able to answer that question again. The gym gave me back a sense of purpose and accomplishment in my life when I was at my lowest. I had been drinking too much, my grades were suffering, I was alienating myself to fewer and fewer people. Being able to squat heavier, run farther, and do more pushups reminded me that I could achieve my goals. Lifting gave me the confidence that I needed when I couldn’t even be bothered to shower.

I’ve learned that not all bodies have to look one way to be fit, and that going to the gym is not a punishment when you’ve eaten too much. Often physical exercise is recommended to people who have experienced trauma without considering their personal history or ability. While the gym has been a large part of my recovery process, it certainly isn’t the answer for everyone, and that’s okay.

For me, working out brings me peace in knowing that I am creating a body that cannot be pushed over. I now love eating more than ever, because I am fueling my body to be the best it can be. I won’t lie and say that I’m completely in love with myself, or that there aren’t days when I regret a meal, or that I didn’t cower to some bro demanding my machine when the next one is clearly empty. I’m also not saying that it’s solely thanks to the gym that I have recovered from my mental illnesses, because it isn’t, and I have not. But it has definitely helped. The gym gave me back a sense of control after hitting setbacks and feeling useless. I’m still working on things, like my social anxiety and anger, but I know that improvement will come. I have my outlet; the gym is my anchor. 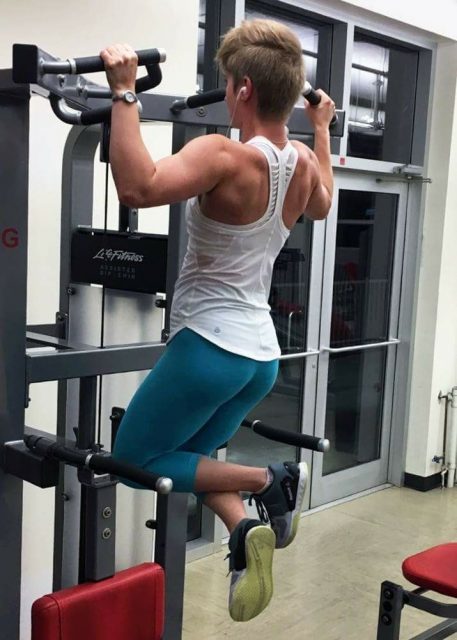 As a child, I was playful and competitive. Sports were a way for me to have fun, see my friends and feel good about myself through my athletic achievements. Over time, however, the meaning of sports had completely changed for me.

My teenage years were difficult: I dealt with a lot of anxiety, panic attacks and, at some points, self-harm. The one activity that helped me cope with these issues was mostly running: it was a mental and physical escape from my problems, but a temporary one. It also triggered an eating disorder: I became obsessed with losing weight and making myself as small as possible, often starving myself in this process.

I started lifting after being sexually assaulted. I was angry at myself for not having resisted more, for not having been mentally and physically strong to protect myself. I felt like my body had betrayed me, and that it wasn’t mine anymore. At this point, running wasn’t enough because I didn’t want to run away anymore: I wanted to fight, to break things and be violent.

Growing muscles has become my way of coping with what has happened to me. It is therapeutic to lift, to throw some weights around the gym and to work out so hard that I can hardly breathe. Lifting helps me cope permanently by allowing me to make my body mine again, to deal with my strong emotions.

I had been told not to lift too heavily in case I become ‘manly,’ ‘too big,’ or even ‘bulky.’ Deciding to gain strength is my way of controlling my body: no one will ever have a say in what I do with my body anymore. Lifting also led me to eat more, increase my confidence, control my anxiety and stop self-harming. When I lift, I feel unstoppable, powerful and extremely confident. I became a personal trainer in order to help other women discover the amazing empowerment you can get from lifting weights as a woman. It truly changed my life. 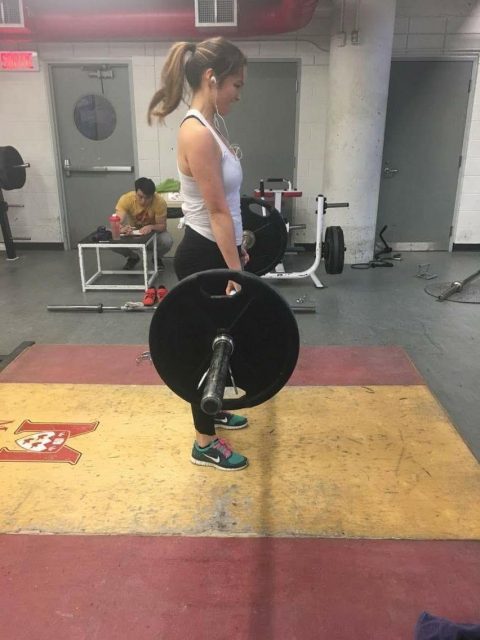 Developing a noxious connection to my own body was years in the making, but the apex of this negative self-dialogue happened after a long, destructive relationship. It began with my partner of several years fetishizing and sexually assaulting me. I often had involuntary repulsion in intimate settings, relived past abusive experiences in successive nightmares and my self-worth hinged on being an ‘exotic’ half-Asian girl. As a result of a slew of mental after-effects, I became distant from my body.

Strength training played a decisive role in reestablishing control over myself after what ended up being a four-year ordeal. Unsurprisingly, my motivations for going to the gym in my first year began as an attempt to ‘shape’ myself into something I could like when looking in the mirror, something enviable in the distant future. However, I found early-on that I quite enjoyed teaching myself exercises, and effecting changes in my physique encouraged me to continue my routine. The gym eventually offered an emancipatory element: during the workout, I often concentrated on achieving a mind-to-muscle connection, which was a welcome break from other thoughts or responsibilities. Significantly, my perception of my body as ‘damaged goods’ shifted to one where I recognized my strengths as a woman and athlete instead.

Still, I can’t tell you that I overcame physical and emotional trauma, nor can I prescribe strength-training as a miraculous, one-size-fits-all cure. Even though lifting weights opened up a transformative healing opportunity for me, the changes were slow, subtle, and largely indirect. My workout regimen did, however, help alter the direction of my self-dialogue toward being responsive to my physical and mental health.

Boxing is a fundamental way of existing in my body in a healthy way as I continue to recover from the trauma I’ve experienced. Sometimes, I relive traumatic memories as if they were happening in the moment. Other times, I feel completely disassociated from my body. I used to spend a significant amount of time feeling as if my body was not my own, that it reacted to things completely independent of me, and that I couldn’t trust it. Sometimes I would completely shut down and feel weak and out of control. When I started boxing a year ago, I began to manage these symptoms and regain a sense of confidence and strength that had been lost to me.

The very act of punching something/someone is intensely cathartic for obvious reasons, but that’s not the only reason I fell in love with the sport. Boxing is a sport that requires you to push yourself. You have to be in the moment, attentive to both yourself and the person you’re fighting. Just about every muscle of your body is used, even if you don’t realize it at the time. You have to believe that you are strong and capable, yet always be aware of the ways you need to improve. That feeling of strength that had been taken away from me when I was assaulted finally started to come back. That strength has been a fundamental part of my continued recovery. I am starting to feel that my body is no longer the enemy, that we’re on the same side, and that finally my body is mine again.