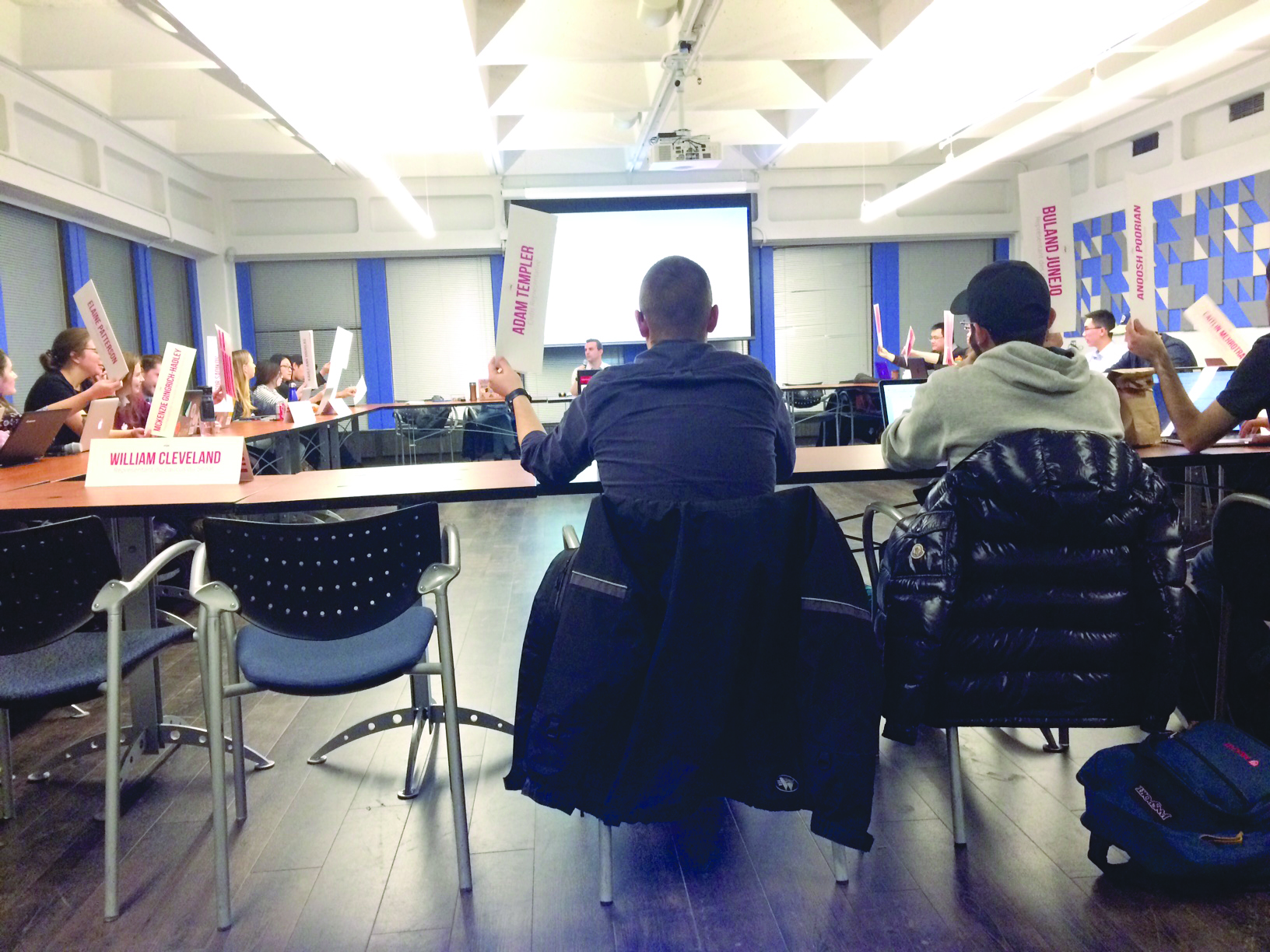 On Thursday January 26 the Students’ Society of McGill University (SSMU) Legislative Council met to hear a notice of motion regarding the amendment of the internal regulations of governance, as well as reports from various committees and from councilors and the SSMU executive team.

Motion regarding the amendment of internal regulations

The notice of motion regarding the amendment of the internal regulations of governance was read by Igor Sadikov, Arts Representative and a former Daily editor.

The motion, according to Sadikov, “primarily consists of […] a set of suggested internal regulations for [SSMU’s] Board of Directors.”

The proposed internal regulations focus on procedures and clarifying the relationship between the Council and the Board.

“Currently, the process is that the Board ratifies all Council decisions,” Sadikov continued, “so this would retain that process, however, Council decisions would basically come into effect immediately, and then the Board would have a choice of ratifying or overturning them, and if it’s overturned, it would come back to the Legislative Council, and basically the internal regulations would recommend that the Board only exercise this power very sparingly.”

The motion provides further clarification on the Board’s power, including its ability to recommend a referendum question to the Council. This power, Sadikov explained, is outlined in SSMU’s Constitution, but the process for recommending a referendum question is unclear, and thus this motion aims to clarify it.

Engineering Representative Richard (Tre) Mansdoerfer voiced some concerns regarding the removal of the supermajority in regards to overturning a Judicial Board opinion.

Mansdoerfer added that he would like to see a supermajority added to the Legislative Council portion in terms of its ability to overturn Judicial Board opinions.

Clubs Representative Adam Templer questioned Appendix A, article 1.3.1, of the motion, which states: “The Board of Directors should only exercise its power to overturn resolutions of the Legislative Council to protect the legal, financial, or operational well-being of the Society.”

“I think that there are a number of different situations in which the Board of Directors might […] consider itself in a position where it needs to exercise power to overturn resolutions of Council beyond just the legal, financial, or operational well-being of the Society,” he said.

He added that “given that the Board of Directors is supposed to be sort of the ultimate governing body,” he felt that this article also had weak wording, and suggested the word ‘should’ be changed.

Sadikov responded that the word should is used for the possibility that the Board might find other reasons to overturn a Council decision.

“The reason I think it’s still worth it to include it is to give guidance to the Board of Directors as to what it should be thinking about when considering overturning the resolutions of the Council,” he said.

Following the notice of motion, committee reports, and a few councilor reports, the SSMU executives (apart from VP Operations Sacha Magder who was unable to attend) presented their reports.

As part of his report, VP External David Aird explained that he, and VP University Affairs Erin Sobat recently attended the Association for the Voice of Education in Quebec’s (AVEQ) members assembly, but said that he would provide a full report at the next Council meeting.

However, Sadikov asked if Aird could provide a few more details about what was discussed at the assembly, for those councilors who were interested.

Aird agreed and continued on: “We talked about some internal policies of the federation and also in terms of social political affairs, there’s a consultation coming up by the provincial government on sexual violence policies in universities.”

“The idea behind that is to mobilize support and get student input on […] what, if anything, a law […] that would mandate universities to have their own policies [would look like],” he explained.

He also shared that he attended the mobilization and association development commission at the assembly, where they discussed ongoing association campaigns.

At the Winter 2016 General Assembly, a question went to referendum asking students whether they would like to affiliate with AVEQ. While students voted against affiliation, Aird expressed that “it does look like we would like to re-ask the question this year during the referendum to McGill students.”

“The feeling is that seeing as there were so many abstentions last year that people just aren’t really aware of what a federation is,” he explained. He plans to try to increase students’ understanding of student federations by tabling.

At its December 1, 2016 meeting, the Board of Governors [BoG] passed a motion whereby members of the McGill community will be allowed to submit written questions and attend a twenty minute question-and-answer period twice a year at BoG meetings. This aimed to facilitate greater interaction between the McGill community and BoG, and was sparked by SSMU executives’ efforts to increase the BoG’s accountability to students.

In his report, Sobat noted that at the Senate meeting on January 18, “the President [Ben Ger] and I asked a question about university governance best practices, kind of to determine the best way forward in pushing for reform to the McGill Board of Governors.”

“We’ve […] settled on an ad hoc committee at the Board as an option,” he continued, “assuming we could get some sort of parity of both governors and non-governors.”

“As it stands, the Board effectively regulates itself when it comes to everything, including succession planning, outreach to and nomination of external members at large, best practices and evaluation of their success. So [we are] trying to see some more accountability and oversight of that body,” he said.

Sobat also shared that the University Affairs office is planning to submit a case to the Advisory Council on the Charter of Student Rights regarding academic accommodations, “identifying issues with […] McGill accommodation policies across the Universities and with some recommendations for improvement.”

“Fun fact, the new Senior Director of Student Services told us that she’s surprised there haven’t been more human rights complaints because our office for students with disabilities is so understaffed,” he added.