Celebrity activism should be scrutinized, rather than blindly praised 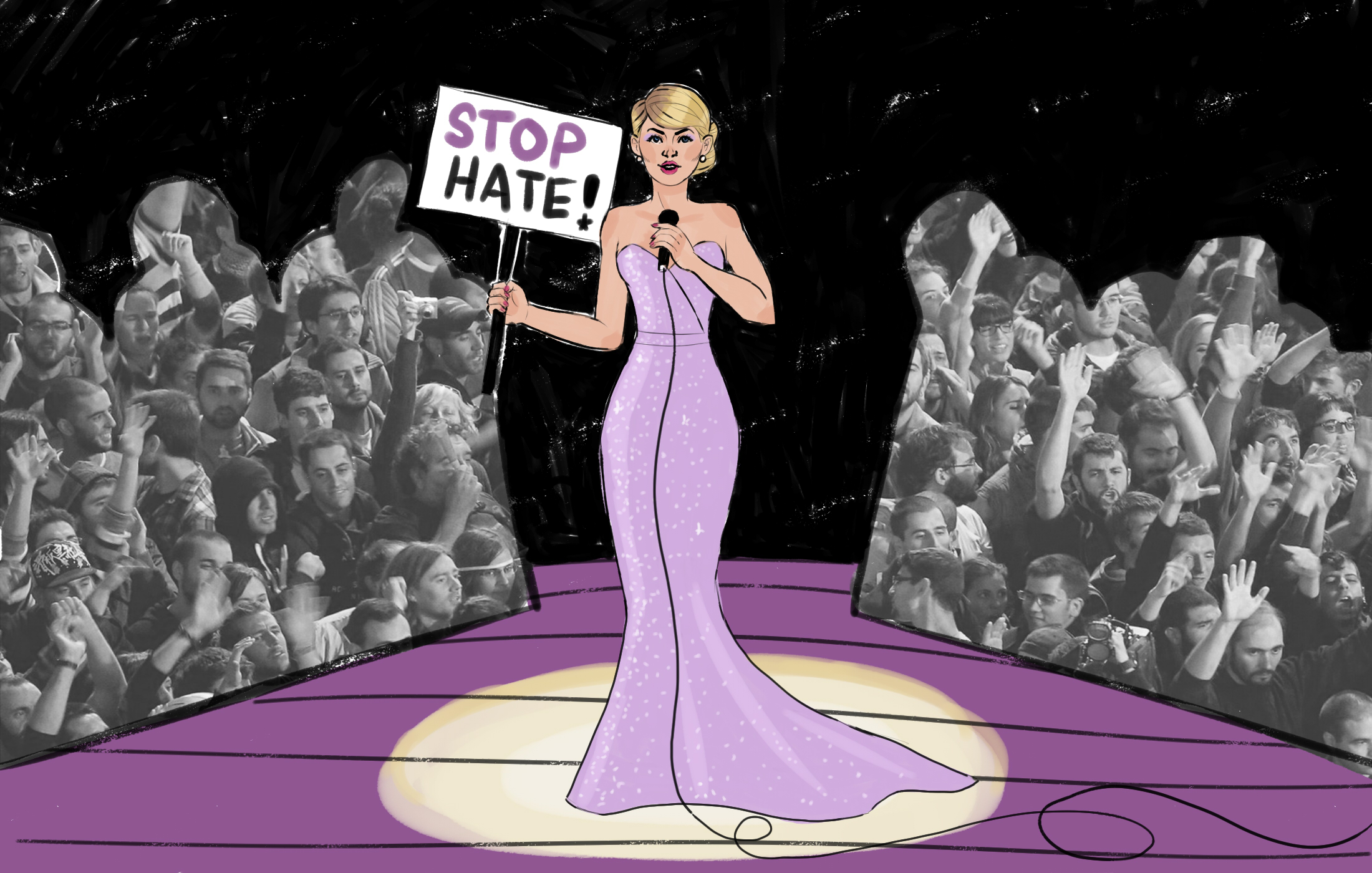 Political activism has never shied away from the spotlight; from the time of World War II, to the Civil Rights Movement, to the Vietnam War, to the Black Lives Matter movement, it has always thrived among celebrities. A life in the spotlight comes with a great deal of responsibility, as audiences are constantly influenced by celebrity lifestyles and endorsements. Whether they want to or not, and whether they know what to do with it or not, celebrities hold a great deal of influence. Especially in today’s digital age, both directly and indirectly, celebrities are able to use social media to take social and political stances. Social media has contributed immensely to the prominence of celebrity activism, acting as a megaphone for social commentary, allowing celebrities to motivate and mobilize social consciousness.

In light of the 2016 U.S. Election, which culminated in Trump’s victory, and the preceding coverage that gave him the platform to be a rather loud spokesperson for bigoted people, many celebrities have spoken out about their aversion to Trump and his agenda. Earlier this month, Meryl Streep took the opportunity at the Golden Globes to criticize Donald Trump’s bigotry and intolerant practices. She claimed Hollywood is an industry established and preserved by what she deemed ‘foreigners,” denounced Trump for mocking a reporter with a disability, Serge Kovaleski, and called for the protection of journalists to “safeguard the truth.” Her speech quickly gained attention, garnering criticism from Trump himself and receiving support from other celebrities. However, while Streep’s speech is earnest and appreciated by many, it is only somewhat effective at addressing the issues that all Americans and other peoples are facing.

Streep’s statement was not innovative or revolutionary. What she said in her speech was a shallow reiteration of what has been continuously said by people with disabilities and other marginalized peoples, who will be disproportionately affected by Trump’s presidency. The kind of ‘activism’ some privileged celebrities engage in is often a watered down repetition of what marginalized people have already been saying. The tendency to prioritize celebrity voices often acts to silence marginalised folks from speaking about their own issues.

For instance, over the past few years, Native Americans have been resisting the establishment of the Dakota Access Pipeline that will threaten the water supply for the Standing Rock Sioux. Many famous people came out in support of the movement, such as Shailene Woodley, who was even arrested for trespassing while protesting. While what she did can be considered commendable, she continuously talked about Indigenous issues without bringing to attention the many Indigenous activists that constantly surrounded her in this fight. This was especially highlighted in a video where she ‘debunks’ Thanksgiving, while Indigenous people can be seen assembling behind her. Instead of giving them a chance to voice their own opinions, she took it upon herself to act as their spokesperson. Woodley has also, in the past, asserted that “we are all Indigenous,” an appropriative statement that not only centres non-Indigenous people in a movement that is not theirs, but also erases how Indigenous peoples have had uniquely painful experiences with settler-colonialism. Woodley demonstrates the fact that even when not ignoring them, celebrity activists tend to speak over the marginalized people they may claim to fight for.

Privileged white celebrities are limited in their ability to thoroughly comprehend and address the weight of sociopolitical issues. Streep’s privilege is evident in her notion that firstly, the press and Hollywood are as vilified as ‘foreigners’ in America, and secondly, that the experiences of foreigners of colour, such as Dev Patel and Ruth Negga, were comparable to white ‘foreigners’ like Italian-born Amy Adams and Canadian Ryan Gosling. The lack of understanding with respect to the unequal and unfair treatment of Black, Indigenous, and people of colour (BIPOC) in America and homogenization of the immigrant experience rendered the speech underwhelming from the beginning. She failed to amend this by the end of her speech, where she asserts that it is a privilege to be an actor, not because of the wealth and power they hold, but because they have the ability to empathize. What could have been an acknowledgment of her own privileges that afford her security in a time of political turbulence, was actually a recognition of the craft itself that allows her to have these privileges. Most of the time, when celebrities are speaking on political issues, their privilege prevents them from seeing the social, political, and economic consequences faced by marginalized communities. When someone is bullying an innocent person, the problem is not simply solved by denouncing the bully. The victim must also be comforted and made to feel safe, and the systems that caused the bully to become powerful must be addressed and dismantled. Because of the privilege afforded to certain celebrities, they are able to denounce bullies like Trump, but fail to acknowledge, care for and support his victims: people of colour, LGBTQ+ folks, people with disabilities, and people at the intersections of these identities. As a result, people in these communities do not feel so invigorated by these calls to action, because they aren’t often made to feel welcome and recognized.

We should remember that engaging in politics and activism is not meant to be self-aggrandizing, but rather focused on societal change. For those who choose to use their platform to effect positive change, a critical examination of their privilege is necessary to understand the nuances of oppression, and marginalized voices should be listened to and supported. Marginalized peoples have continuously fought for their own rights to life and livelihood and are able to do so with much more nuance and sensitivity than privileged celebrities who have not been through the same experiences. BIPOC, LGBTQ, and disabled celebrities, especially those at the intersections of these identities, often bring light to social issues in ways that white, cisgender, heterosexual, and/or able-bodied celebrities cannot, by highlighting their own experiences with oppressive systems. While I do believe that many privileged celebrities have good intentions and want to do what’s right, I also believe that activism should be led by the oppressed. Celebrities should be using their platform and privilege to uplift and support victims of oppression, and help them gain access to the tools and resources to mobilize. This a much more effective, and more noble way to make a difference.