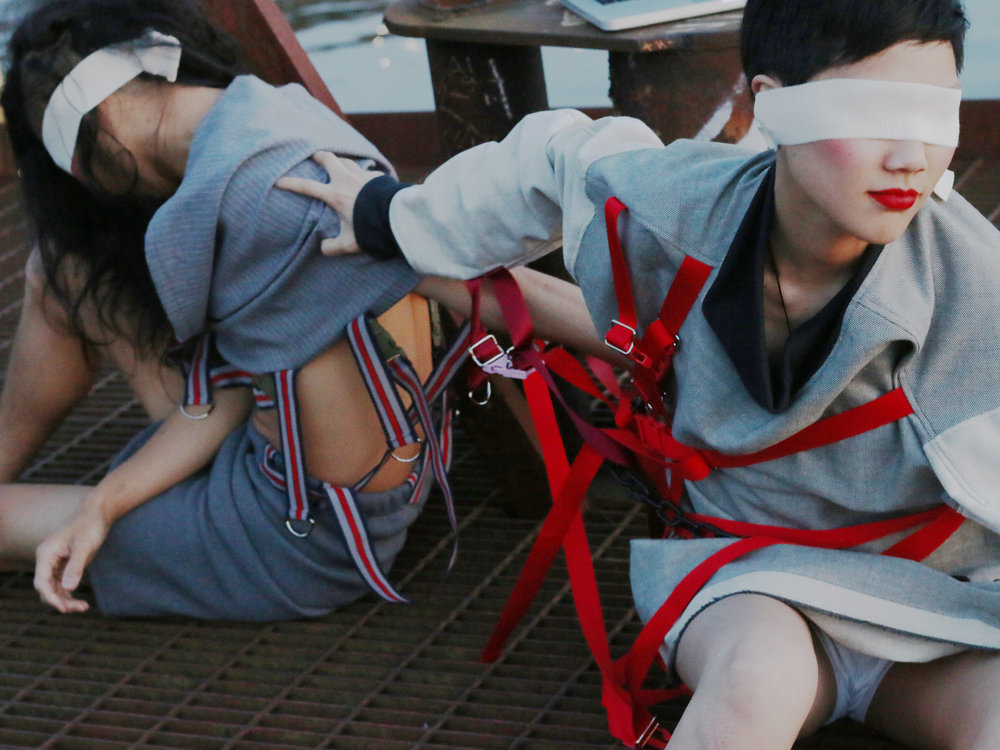 It is a well known fact that Montreal has a considerable lack of decent Asian restaurants, and the few that do exist are populated by white people in search of ‘authentic ethnic cuisine.’ It is even rarer to come across a media outlet that not only centres Asian voices as a whole but is also interested in tackling the hierarchies within this identity formation. Such a platform would be attuned to the cultural and political histories that continue to inform the continent’s movement – its changing borders, migrating populations, fluctuating economies – and highlight conflicts and inequalities instead of smoothing over them. It would acknowledge that the political geography of the homeland has a real influence over the diaspora, both materially and affectively.

Such is the aim of re:asian, a new online platform that seeks to publish the art and stories of the Asian diaspora in North America. Tailored specifically to youths, re:asian hopes to establish a community where personal and political concerns are voiced and channeled into direct action. The Daily spoke to two of its editors, Elysse Cloma and Michael Stewart, about the importance of creating media, generational gaps among immigrant families, and solidarity with other people of colour.

The McGill Daily (MD): Could you describe re:asian, its vision, and team of editors?
Michael Stewart (MS): re:asian is a Canadian and U.S. based online platform, though we plan on doing different kinds of platforms in the future. Our focus is to allow Asian-identifying people people living in the U.S. and Canada to create content for other diasporic Asian people by providing them with their own space and filling it with critical and political writings. We want to look at our history, culture, and community in both celebratory and critical ways.
Elysse Cloma (EC): In terms of publishing, right now we’re slowly relaunching from what re:asian used to be, which is Yellow Noise. Our goal at the moment is to publish once a week,. In the future hopefully we’ll expand to something bigger – or we’ll be publishing more frequently.

MD: What’s changed from Yellow Noise and what hasn’t?
EC: The main thing is the name change. For the new editors who got involved, we didn’t think that “yellow” was something we identified with. I thought that Yellow Noise was a really catchy name, and represents the act of reclaiming specifically East Asian-ness, at least in the way I understand it. I understood why it would be called that, with the history behind it, but I didn’t feel included with the word “yellow.” Changing the name, and also redefining the platform and how it can be used, allowed us to redefine the Asian identity as something more expansive and inclusive.
MS: We want to include more South Asian, Southeast Asian, even West Asian folks on the platform and working toward ensuing that their voices are also heard.

MD: Discursively, West Asia is more often grouped together with North Africa, commonly designated by the colonial term “Middle East.” What made you decide to highlight this identity category in re:asian?
MS: We want to expand the term “Asian” and what that encompasses. Part of that does get a little wishy-washy in the sense of how people identify, exactly. If we did receive submissions from people who identify as West Asian we would love to work with them and work to publish their work on our site.

MD: What do you think are the most important issues that Asian people are facing right now, especially for those in the diaspora? How do you see them addressed in your publication?
EC: Seeing ourselves as settlers on Indigenous land is one huge thing, and how we might be perpetuating anti-Blackness, but also wondering what our internal issues are, such as how we deal with the intersections of class and race, which is a big issue in places like Vancouver.
MS: With the conviction of Peter Liang, a letter about police brutality was crowdsourced. Things like that show how solidarity work looks like. Other points of discussion include mass incarceration, anti-LGBTQ legislation, and dealing with xenophobia and anti-Muslim violence. As someone living in the U.S. and staring down at the Trump presidency, I hope our publication can help talk about these issues and start dialogue a community space where people can come to and look at and see how other youths are talking about these things. These discussions can lead to going out and doing the work that makes the world a better place at the end of the day.

MD: Do you see re:asian having a role in negotiating the position of Asian folks in relation to other people of colour, in particular Black and Indigenous folks?
EC: This conversation is about Asian-identifying people in the diaspora defining our role as settlers on Indigenous territory, showing solidarity with Black folks, and connecting to other people of colour, which goes to show how the ways by which Asian people relate to the concept of race – through the model minority trope in particular – are intersectional. For re:asian, our goal is to create dialogue on these issues from the perspective of youths in the diaspora.
MS: In the political climate that we’re in, there’s been a lot of talk within Asian communities regarding our role within white supremacy and about our anti-Blackness. Exploring that would be essential to our idea of solidarity work, in addition to finding our own place within the formations of racial identities in the U.S. and Canada, historically and in present-day.

MD: What are the obstacles for Asian people working in media? Why is creating content important?
EC: For Asian writers and figures in the media, the main obstacle they’re facing, aside from getting a foot in the door, is that they have a sense of responsibility that they have to tell stories accurately if they’re going to tell stories about being Asian. That’s a huge responsibility, to have to develop a generally satisfying representation in mainstream media without trying to play into stereotypes or dulling it down for white audiences. I notice that Generation X, and anyone older, struggled achieving visibility. I’m really critical the roles they played because they were trying to be considered acceptable for white media. I’m not saying it’s better now, but it’s something people are more aware of. We even have representations like Fresh off the Boat that might resonate with a lot of people. It’s not that these shows shouldn’t be received without criticism, but we’re moving in a direction where we’re starting to see the responsibility of having authentic portrayals being more important.
MS: It’s not only representation on screen, but also the writers or videographers behind the scenes – if they identify as Asian, they have that lens to look at things. Even for a publication, like ours, it’s important that there is representation in its editorial team. I have seen a lot more Asian youths really starting to make their own spaces, on Instagram, or websites, or blogs, which is a really great thing to see. It gives ourselves a means of expressing ourselves within a power dynamic that really doesn’t want us to say what we want to say. It’s like our food: a lot of the times the kind of Asian food that’s accepted is the kind where the taste is changed so that it fits a white palette.

MD: You emphasized getting Asian youths involved in publishing. Do you envision re:asian having a role in facilitating dialogue between youths and older generations?
EC: Definitely. [Within immigrant communities] there’s this epidemic where you don’t relate to your parents, or your grandparents, or your relatives, to a satisfying level. I think focusing youths on the platform is [so they] have an outlet of expression. But on the other hand, I also want to have those expressive outlets be used to bridge generational gaps. Say my parents didn’t agree with the content: they can at least be exposed to [what we are saying] and reflect on it. A lot of people also don’t necessarily feel safe sharing these kinds of [political] thoughts with their parents at this point. But being able to express themselves is really important, and so fostering safeness and inclusivity on an online platform is huge for us.

MD: What do you want potential contributors to know?
MS: Right now we’re having a callout for submissions this month [January] around the theme of “firsts” since this is our first month after launching. A lot of times we have these moments in our lives that stay with us. For example, the idea of firsts: Is the first time the last time? What does that mean to you? It could be something serious like the first microaggression you felt, or the first time you felt racialized within white supremacist society, or the first time you had this type of food, or the first pair of shoes you bought, first time you felt beautiful, stuff like that. We just want people to really have fun with it – or be serious and critical with it. [It’s] a space [for] you to express a first you felt and share that with us. We would love to work with anyone who wants to submit, as long as it’s on the lines of firsts.

Catch an audio recording of this interview on Unfit to Print, through CKUT radio or The Daily’s website.

The Daily would like to acknowledge that Saima Desai, current Features Editor, and Chantelle Schultz, past Multimedia Editor, are part of the re:asian editorial team.