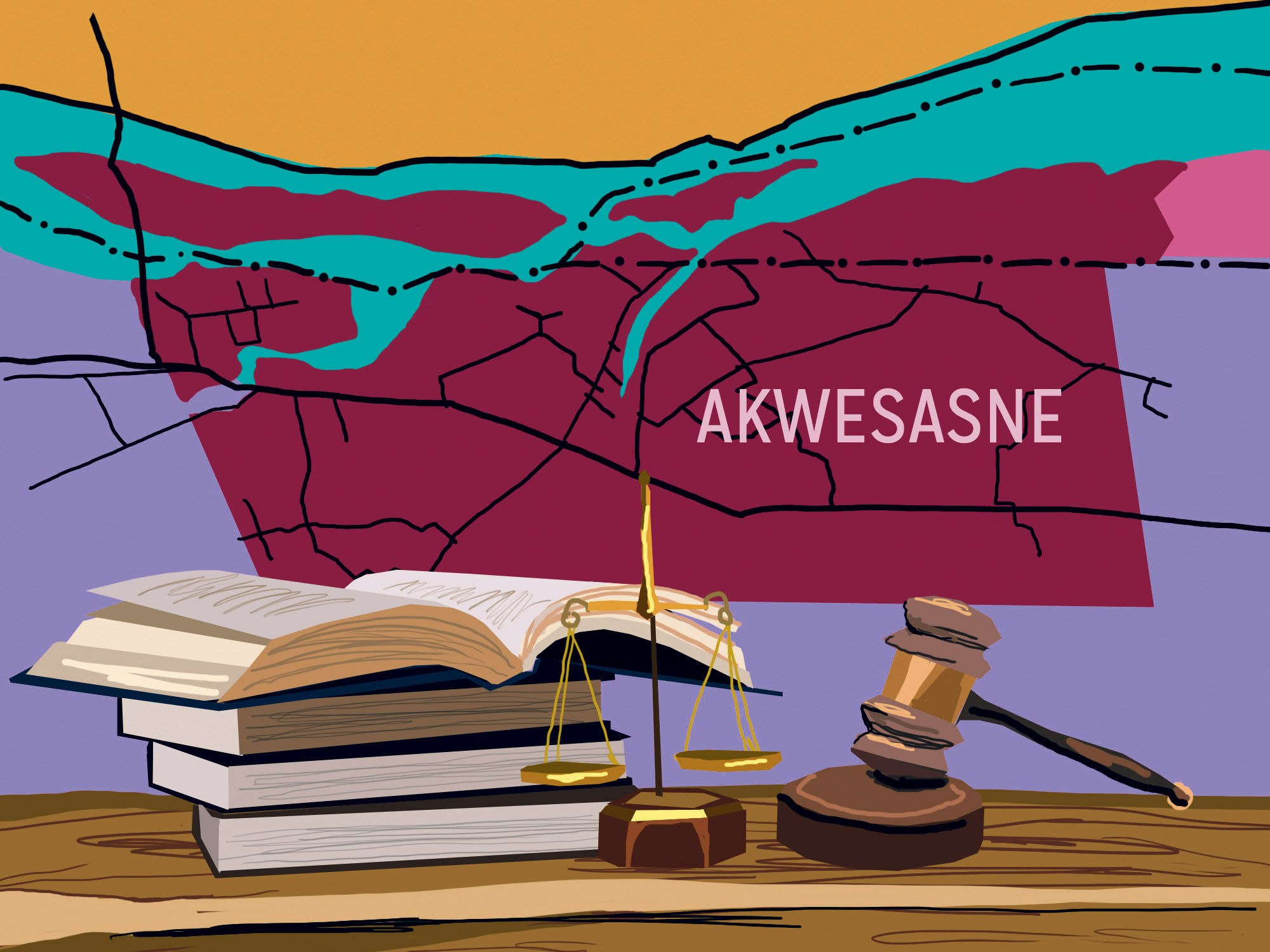 On Monday January 16, several dozen people gathered at New Chancellor Day Hall to hear a presentation by three administrators of the Mohawk Council of Akwesasne, Canada’s first independent Indigenous court, about the structure and nature of the court.

Panelists included Kyrie Ransom, justice coordinator at the court, Bonnie Cole, prosecutor and legal council, and Gilbert Terrence, a court administrator. The presentation was followed by a discussion period moderated by Kirsten Anker, a professor at McGill’s Faculty of Law who specializes in property and Aboriginal peoples and the law.

The Mohawk community of Akwesasne straddles the St. Lawrence River at the intersection of the Quebec-Ontario and Canada-United States borders. As such, its residents have had to contend with even greater challenges to their sovereignty than many other Indigenous nations in North America. Until the mid-1990s, judges at the Akwesasne Court were external officials appointed by the federal government under the Indian Act of 1876.

When this process was abandoned, it was expected that Indigenous communities would transfer to the jurisdiction of the provinces in which they were located. For Akwesasne, this would have meant adjusting to two different provincial systems. Instead, the community appointed its own justices, and set about the process of codifying their legal and cultural traditions into a body of law that would be faithful to the values of Akwesasne’s people, and make sense to external authorities.

This process was made all the more complicated by the difficulty of translating key concepts from the Mohawk language into English: Ransom explained to the audience that the original Mohawk term for “justice” literally meant the fall of a gavel.

“The connotation was very negative,” she said, so the lawmakers of Akwesasne consulted linguistic experts in order to develop a new, more positive term. In the end, they came up with a word better suited to the legislators’ project. Roughly translated, it means ‘those who uphold the law.’

This process was made all the more complicated by the difficulty of translating key concepts from the Mohawk language into English: Ransom explained to the audience that the original Mohawk term for “justice” literally meant the fall of a gavel.

While some carefully considered updates to traditional terminology were made, the overriding imperative of Akwesasne’s legislators was respecting the community’s cultural and legal practices, and grounding their work in collective history.

While many other Indigenous communities have their own courts, Akwesasne is the first in Canada to have constructed its own system without, as it were, permission from the government.

“Basically, our court has jurisdiction over all matters on Akwesasne lands,” explained Cole. While the court does not yet handle more serious infractions, such as murder and assault, the legislators hope to expand their jurisdiction in this regard.

“We structured the court to meet the needs of the community,” Cole said. “It’s a restorative justice approach, looking at restoration, rehabilitation, restitution – all of those concepts. […] We look at the person, and not necessarily just the offense. So when we’re dealing with people, we’ll be looking at who he or she is, what are their skills, what are their gifts, and how will that be used and incorporated into restoring balance, not only to that person, but to the community.”

While the court does not yet handle more serious infractions, such as murder and assault, the legislators hope to expand their jurisdiction in this regard.

This ethos, said Cole, has fostered an environment that is more flexible and less adversarial than the mainstream Canadian legal system.

Notably, she explained, “We don’t do jail, we don’t intend to do that. It’s not for us. We know that the system is failing, right?”

According to the Office of the Correctional Investigator, nearly a quarter of Canada’s imprisoned population is composed of Indigenous people, while this demographic only represents four per cent of the general population.

Disproportionate incarceration and police brutality is simply one facet of the systemic oppression faced by Indigenous Canadians. Rather than send more marginalized citizens to prison for relatively minor offenses, the Akwesasne court resorts to more constructive penalties.

“We don’t do jail, we don’t intend to do that. It’s not for us. We know that the system is failing, right?”

In accordance with the principle of restorative justice, those convicted are often required to perform community service – painting walls or coaching soccer, while perhaps attending therapy sessions, or undergoing treatment for substance abuse.

According to Terrence, the system is working: out of 63 cases in the restorative justice program so far, sixty have been successful.

However, in Cole’s words, the court is still very much “a work in progress.” It is in serious need of more legislators to continue refining the legal system and enable the understaffed establishment to work more efficiently.

The panelists at Monday’s event extended an invitation to the McGill law students at the panel to come work at Akwesasne, and judging by the enthusiasm of the audience, they may very well be in luck.