Songs to smash the state

What the Fuck Am I Doing Here? incites as much as it educates 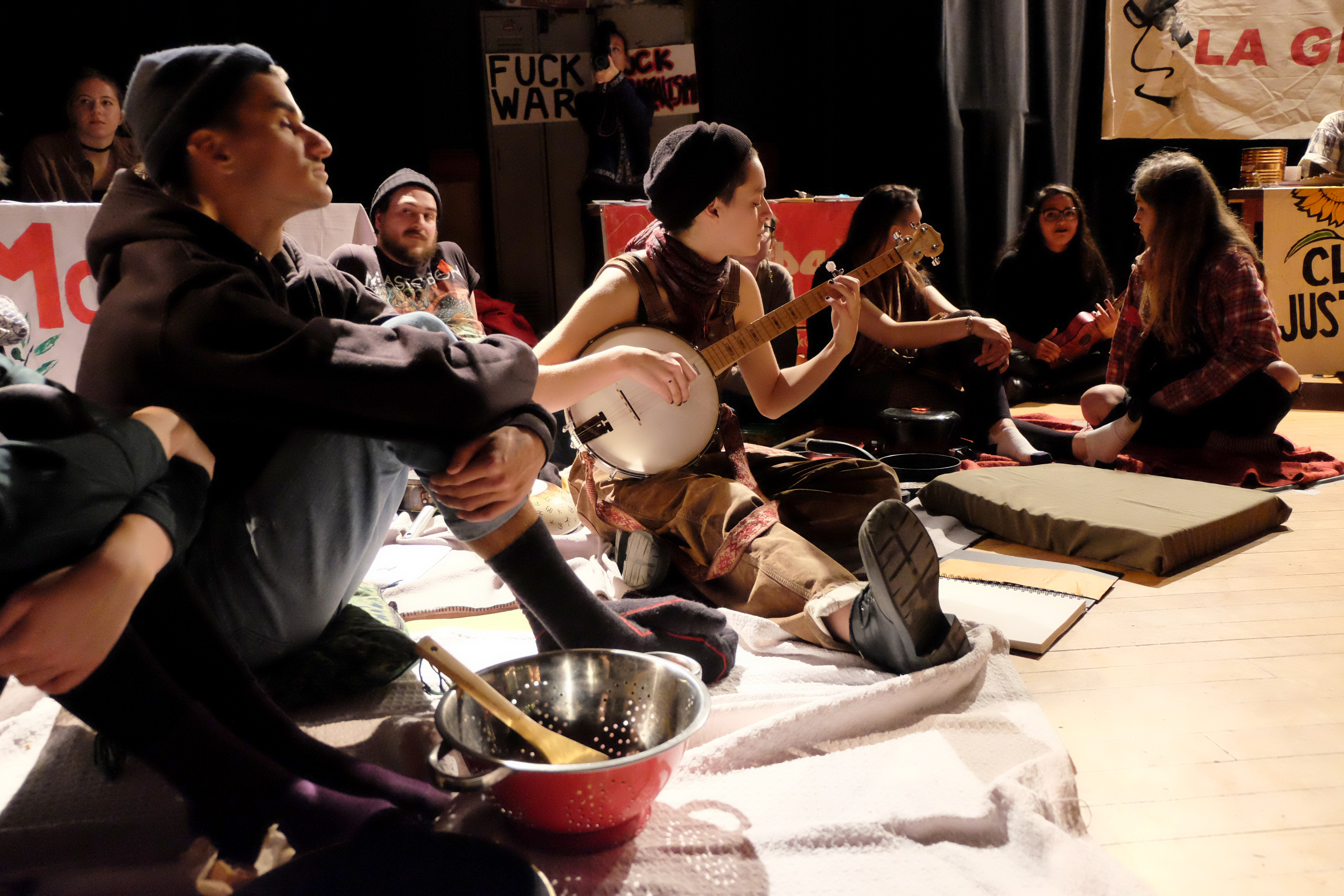 We’ll start at the beginning, with the chant, because it was really the reopening of a revolution:

“The people, united, will never be defeated.”

Thus began a performance of What the Fuck Am I Doing Here? – An Anti-Folk Opera, a co-production of Tuesday Night Cafe Theatre and Fishbowl Collective. Under a flickering red light, actor Alysa Touati twirled a red flag painted with a black anarcho-punk symbol. With a megaphone and bandana over her mouth, she led the audience in the chant, who grew louder with each repetition.

What the Fuck was written by Caytee Lush, an organizer during the 2012 Quebec student uprisings, also known as the “Printemps érable.” During April and May of 2012 over a quarter of a million students took to the streets to protest a proposed tuition hike under then Liberal Premier Jean Charest. What the Fuck is the story of “the mythos of a certain generation of student organizers,” director Hannah Kaya told The Daily – and the 2012 student movement has, indeed, been turned into a myth. But the issue with a myth is that it often obscures the humanity of its gods.

The play is Lush’s attempt to humanize the activists behind the uprising, and destigmatize anarchism. It’s her semi-autobiographical story of a McGill student – a “part-time waitress, part-time revolutionary” – who gets involved in anarchism and the 2012 student strikes. Through song and monologue, Touati, Sarah Mitchell, and Summer Mahmud explain the highs and lows of being a student organizer during the strikes – from paint-bombing Charest’s office to dealing with police brutality and burnout.

What the Fuck serves to educate, to incite resistance, and to allow current students access to the energy and history of years of student organizing.

Student directors Kaya and Connor Spencer are also the co-founders of Fishbowl Collective, an emerging theatre company that aims to combine “unique imagery and visceral storytelling” and illustrate “a distorted view of society.” Their adaption of What the Fuck complicates the history of student organizing in Quebec. It critiques the male-dominated organizing spaces, the lack of self and collective care, and the internal divisions between anarchists and other organizers that contributed to the quiet demise of the 2012 movement. Much of this clear-eyed critique can be credited to Lush’s lyrics, but Kaya and Spencer took pains to create a cast and crew, a theatre space, and an experience that embodies the woman-led, sustainable, and accountable radical future of anti-capitalist activism that they want to see.

Their addition of three songs to the show – created as a collaborative effort between Kaya, Spencer, and the rest of the cast and crew – connected Lush’s text to the modern climate of anti-austerity organizing in Quebec. Kaya told me that their guiding question was “how do we take up that history, how do we continue to learn from that history, and deploy that history for our own movement – which is explicitly, now, not about tuition fees, but about austerity – something that is much larger in scope, and affects many more people?”

The performance space was strung with fairy lights and plastered with posters, which read “fuck patriarchy,” “fuck resource extraction,” and “fuck borders.” Rather than chairs, audience members sat cross-legged on cushions on the floor. The show integrated videos of Spencer and Kaya, projected onto whiteboards, giving mini-lectures on anarchism and austerity measures in Quebec, over the soft doo-wop crooning of the performers. It was like the most rad in-class presentation I’ve ever seen.

The performance itself was punctuated by missed words and stumbled lyrics – but what would an anarchist theatre piece be without a few rough edges? While the play is structured by Lush’s text, Touati opted to use her own words each night of the performance, while adhering to the general narrative. The effect is sometimes awkward, but usually disarmingly intimate, with the performers laughing along with audience members over forgotten lines.

Above all else, What the Fuck is also an act of resistance itself.

The highlight of the show was “Betrayal song,” a slow ballad performed by Mitchell, the strongest vocalist of the three. “We threw snowballs / and then bottles and then rocks / striking fear into the hearts / of those damn cops,” she sang. Touati, on the other hand, performed her songs at a rapid pace, combined with an ever-changing set of ad-hoc instruments – including ukuleles, a banjo, and two bricks that Mitchell tapped together. The performers incited audience members to sing or shout along, bang pots and pans in the style of the “casserole” protests, and perform stand-in characters like “the McGill Bro.” Touati’s expansive energy and obvious commitment to the ideology behind the show made her performance convincing and engaging. But since the lyrics weren’t always displayed on-screen or provided for the audience, the words to Lush’s intricate narrative songs were often swallowed in the chaos.

But for all the talk of smashing the state, perhaps the most radical parts of the show were its all-female cast and crew, and its focus on collective care. “That was something that we asked for when we were casting, and auditioning, and recruiting crew: that we had people who identified as women,” Spencer told The Daily.

“There is a dialogue that tends to happen predominantly within women who are organizing: a dialogue of care and emotional labour, that’s just assumed that women will take up – and therefore is not spoken about and not addressed properly, and not given the proper value, time, space, or facilities,” she continued.

What The Fuck doesn’t try to sugar-coat the soaring highs and plummeting lows of activism. Rather, Lush’s lyrics lay bare the self-doubt, emotional and physical exhaustion, and power dynamics inherent in organizing. But in its honesty, it also manages to capture the overwhelming sense of kinship, hope, and collective struggle that comes with hundreds of thousands of people taking to the streets.

There’s no attempt to pretend that the 2012 student strikes did anything but fizzle out – and the play had a fitting anticlimax. Even so, the performance lingered. The guitar kept strumming softly, and the audience members broke off to talk to representatives of McGill BDS, McGill Against Austerity, and Demilitarize McGill who had been invited to set up tables in the space.

“There is a dialogue that tends to happen predominantly within women who are organizing: a dialogue of care and emotional labour, that’s just assumed that women will take up” – Connor Spencer

“Basically, by having a show here every night, we have created a space where, for eight nights, people can come in, and discuss, and organize, and create change,” Spencer told The Daily. “On McGill campus, specifically, there are not many spaces where that can happen – or [those discussions] are relegated to back rooms, or lightly discussed over coffee.”

Spencer and Kaya succeeded in providing an Anarchism and Anti-Austerity 101 course that was so fun and free-wheeling that I barely noticed how much I was learning, until I found myself in my seminar class the next morning, arguing passionately for the appropriate uses of violence against the state. In this way, What the Fuck serves to educate, to incite resistance, and to allow current students access to the energy and history of years of student organizing. Above all else, What the Fuck is also an act of resistance itself.

“To get a group of folks together in a space – led by women – to talk strategy, to create together, to inaugurate something unpredictable and unexpected; that is real politics,” Kaya told The Daily. “The exchange of ideas and opinions in a room – that’s world-building.”

What the Fuck Am I Doing Here? runs from November 23 to 26 at Tuesday Night Cafe Theatre (Morrice Hall, 3485 McTavish). The venue is on the first floor and wheelchair accessible. The show is pay-what-you-can.