I never feel more alone than when I’m on a plane. I never feel more impatient either.
Loneliness and impatience, when you’re trapped on a seven hour flight with 500 other strangers is a not a great thing to feel. More than ever now I feel, or I have been feeling, an overwhelming emptiness.

Not the morose kind though.
Not the kind of emptiness you feel you can stifle with something; someone.

Just the kind you resign yourself to.

Elias Khoury said that Lebanese people are ever happier than when they’re on a plane.
In Lebanon, they feel stifled – they have nowhere to run from the many crises that fatigue the country like the plague. They have nowhere to go, except the airport. Abroad, they feel depressed, they pine for home – it’s not the same over ‘there’. You don’t completely fit in, people look at you weird sometimes for speaking out loud in your mother tongue, you feel like you’re trapped in a dream, along with everyone else (are they all really happy?). So, there’s nowhere to feel more content on than a plane, either leaving Lebanon, or leaving your adopted second home on the way back to your ‘real’ one, away from the illusion.

We are a people in a constant state of transit, and simultaneously also of latent dynamic energy.
More than half my plane from Beirut to Paris was filled with people who were on their way to Canada. In many ways the country itself has become a myth, a bedtime story we tell our friends – or anyone who would care to listen really – simultaneously beautiful and abhorrent. The only reality I cling to is the friendships I’ve made there, everything else – all my problems, my casual sexual encounters, my physical environment even – I can will away if I close my eyes and concentrate hard enough. And when I leave again it will have all felt like a prolonged lucid dream.

This makes me restless, I feel uncomfortable. I numb myself any way that I can. I cling on to the people I know if only to legitimate my own sense of self.

Last night in Beirut feels unreal. I was not present. My body was there, it was responsive, I ate and replied when called upon. But my mind was completely absent, completely clouded with recurring thoughts of my impending departure.

I’ve never really felt this way about leaving before, it feels odd.

I tried to keep up appearances if only for my mother’s sake, but if it were up to me I would’ve done away with the formalities altogether.

“Your mother is worried about you,” my father declares, sitting in the cockpit of the plane that took me to Europe. I am unfazed by his statement. I respond with a meek “Mm.” And that’s that, I go back to my book.

“… Personal and political are interdependent but not one and the same thing. The realm of imagination is a bridge between them, constantly refashioning one in terms of the other …” Azar Nafisi says to me.

Driving to the airport at dawn is always a treat. The streets are refreshingly empty as I speed down the highway towards Beirut. The sky is still dark, but slowly giving way to faint hues of indigo, painting everything in a rather somber light. Nothing looks or feels threatening at this time of day. My anxiety melts away.

As the sun inches its way up over the mountain range, we are instantly engulfed in an inescapable heat. The city wakes up.

The airport is filled to the brim with people. “Four full flights have already gone off to Hajj,” the airport transport driver tells my father. It is 6 a.m. Many people in line are dressed to the nines – where are they going? Only in Lebanon do people bother dressing up to get on a plane. I will never understand this. I feel underdressed in my black pyjama shorts and my matching Mashrou’ Leila t-shirt.

As we take-off, the city, now below us, looks magical, shrouded in a mist, all homogeneously a fuzzy baby blue. Nothing has changed, but I feel incredibly different.

I think of the ancient oak tree that guards the entrance to the capital. Its branches spread out to completely eclipse both sides of the four lane highway in shade. What has it seen?

We land in Montreal in a couple of hours. Everything will happen quietly from there. The conductor in my brain will take over the movie of my Canadian life as I go back to my last year on Turtle Island, Inshallah. 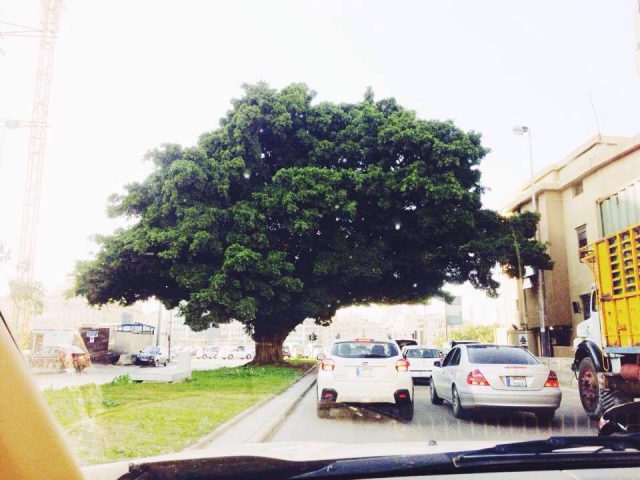