Politics and natural disasters meet the King of the Monsters 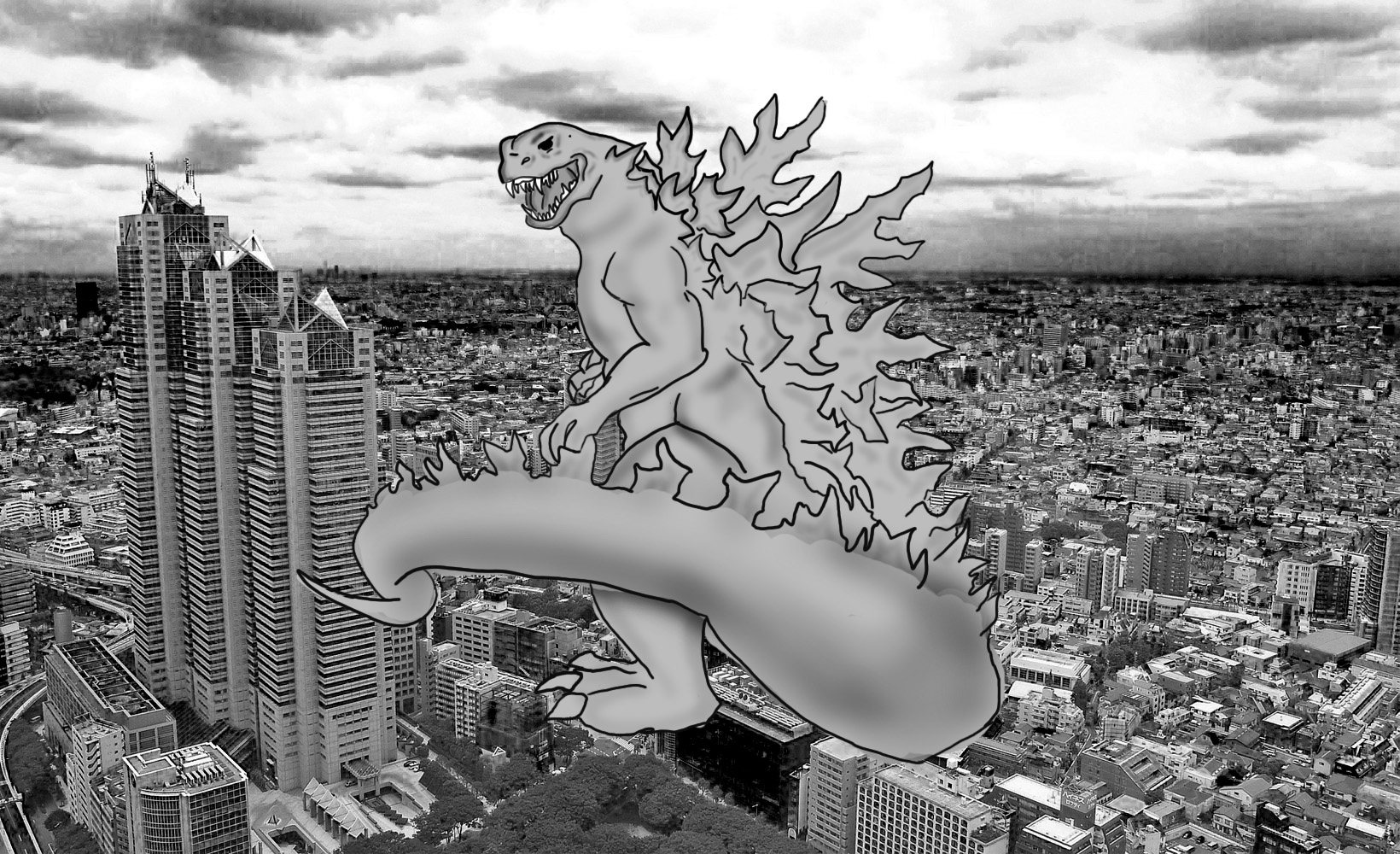 Ever since its reptilian silhouette and chilling roar first emerged on the big screen, Godzilla has become one of Japan’s most recognizable and profitable cultural icons. Ishiro Honda’s 1954 film places the creature directly against the fearful and despondent society of postwar Japan – still deeply afflicted by the nuclear bombings of Hiroshima and Nagasaki. As a result, the “King of the Monsters” has grown to become not only a source of entertainment, but also a lasting allegory of nuclear devastation and the consequences of humankind’s tragic arrogance.

This allegory has been updated and reconfigured in Shin Godzilla, the latest film in the Godzilla series. Directors Hideaki Anno and Shinji Higuchi were compelled by the success of Gareth Edwards’ 2014 Godzilla. Edwards’ film, however, places the Japanese cultural icon within an American context. Shin Godzilla replied to Edwards’s film by reclaiming this symbol and examining its historical ties to Japan, as well as the power of allegory to demand change within the Japanese government’s bureaucracy. As a result, the film was considered an outstanding success in Japan, more so than in the U.S., demonstrating how cultural context frames and politicizes a film in different ways.

In contrast to many other films in the Godzilla series, Shin Godzilla doesn’t draw inspiration from the heritage of nuclear bombings. Most critics believe that Honda’s 1954 film represents Godzilla as a physical manifestation of a nuclear bomb, thus punishing mankind for creating the bomb in the first place. Instead, Shin Godzilla represents the turmoil inflicted on Japan by the 2011 Tohoku and Fukushima natural disasters. The message in Anno and Higuchi’s film, however, holds the government – not human kind – responsible for encouraging the monster’s destruction. Subsequently, the film criticizes the government’s failure to take decisive measures against Godzilla and ensure the wellbeing of its civilians as they flee from the chaos and destruction, because of the government’s need to secure their own interests before all else.

In Shin Godzilla, the titular monster has evolved into a terrifying combination of tsunami, earthquake, and nuclear meltdown, embodying the triple disaster that occurred on March 11, 2011 in eastern Honshu. As it emerges from the depths of Tokyo Bay, the creature begins its onslaught by wreaking destruction through the bayside neighborhoods. Godzilla is first seen plowing within massive torrents that engulf cars and boats and tear the bricks and concrete off buildings while civilians run away in terror. As the monster then evolves from a primitive worm-like creature to a fully advanced leviathan, the Earth begins to quake in the presence of its fearsome power.

The government evolves into a role of secondary, passive antagonist, while Yaguchi and his team are the ones that fight back against deference and buck-passing.

The city, now evacuated, leaves only the remnants of Tokyo; roads and monorails grow cracked and jagged, while apartment buildings and commercial skyscrapers crumble down to the streets below in a pandemonium of smashing glass and crushing concrete. Finally, when the military first attempts to destroy the creature, it unleashes its full nuclear power. Godzilla’s atomic breath is now complemented by devastating energy rays shot from its dorsal fins, which blaze down the city and envelop its ruins into the darkness of the night.

Following these different scenes of destruction, the film shows government officials as they attempt to control damage and provide emergency services to civilians. The cinematography then closely mirrors photos that surfaced from the actual disasters. We are given shots of the mobilizing blue-suited civil servants combing through huge piles of debris strewn across the devastated city, overcrowded underground shelters where terrified and confused civilians sit amidst unsettling lights and sounds, and politicians donning their emergency jumpsuits and convening emergency press conferences. The way these scenes are staged starkly echoes the way real-life journalists and reporters documented the Tohoku earthquake and tsunami and the Fukushima nuclear meltdown on March 11 and afterwards. Even Godzilla’s massive tail – jagged and cracked with radioactive energy just like the rest of its new body – swishing over residential quarters evokes memories of the nuclear fallout sent wafting over towns and cities. By mediating images of the triple calamity through the monster and its destructive acts, Shin Godzilla thus reveals the trauma that still lingers in the collective subconscious of Japanese society.

Aside from these visual callbacks to the 2011 disasters, Shin Godzilla also succeeds as a highly potent commentary on the state of contemporary Japanese politics and its incapacity to deal with such a crisis in an efficient way. Early on in the story, as the Prime Minister’s cabinet members assemble to evaluate the first reports of the monster, we already see them indulge in self-interested and complicated formalities to determine the right executive course of action. This portrayal evades the two stereotypes about politicians that can undermine the political element of any action film. Politicians can be presented either as benign, sappy figures who naïvely put their nation and their people above all else and do not show the slightest self-interest in the outcome of the narrative, as demonstrated by filmmakers like Michael Bay and Roland Emmerich, or as caricatures who stay indifferent to the pain and oppression of the populace and are only preoccupied by their equally bland self-interests of power accumulation, as demonstrated by filmmakers like Oliver Stone. Instead of resorting to these tropes, the screenplay instead opts for a critical, sometimes even satirical, but ultimately pragmatic and thoughtful tone when showing the interplay and steps of decision-making between the different officials.

Godzilla has grown to become not only a source of entertainment, but also a lasting allegory of nuclear devastation.

Shinzo Abe, the current Prime Minister of Japan, has endorsed the film, and said before a military gathering in September that “[he] heard that the chairman of the Joint Staff Council and members of the Self-Defense Forces appear in the film and are depicted as being very heroic.” Abe seems to believe that the legacy of Godzilla is rooted in the “unwavering support the public has for Self-Defense Forces.” However, this idea of “unwavering support” is contested within the film. Hideaki Anno and Shinji Higuchi portray the Self-Defense Forces not in a way that evokes patriotism, but invites skepticism.

The film openly values the restoration of Japan’s power in the context of contemporary politics, especially over its relationship with the United States. The younger political generation, represented by protagonist Rando Yaguchi and his team of so-called “nerds and scientists” who dedicate all of their efforts to conceive a weapon against Godzilla, represents the need for Japan to reaffirm its power within its bargaining and cooperation engagements. It’s important to recognize, however, that the film doesn’t advocate Japanese militarization to stand their ground. While advocating the return of Japan’s bargaining power, it still keeps a critical eye on the use of the military to resolve this kind of crisis.

In Shin Godzilla, the Japanese government is portrayed as an old guard who finds itself to be mostly out of touch with modern society, sticking to overly complex and corpulent bureaucratic dynamics. The hierarchical nature of the political system is reinforced as government officials use their political power to protect their interests at the expense of the civilians. It is not that the government is sinister or mean-spirited, but simply inept and averse to any course of action that would compromise their positions. By minimizing the drastic effects of Godzilla’s rampage during press conferences, or cherry-picking the rosiest of situation assessments provided by experts, they disregard the city’s best interest and rest in a state of comfortable but unproductive indecision. The government evolves into a role of secondary, passive antagonist, while Yaguchi and his team are the ones that fight back against deference and buck-passing. These people take initiative to construct a potent weapon to overtake Godzilla, thus illustrating the film’s claim of hoping for a younger, bolder, more dedicated political generation to lead Japan to a brighter future.

While advocating the return of Japan’s bargaining power, it still keeps a critical eye on the use of the military to resolve this kind of crisis.

The depiction of a rigid government, perpetually mired in their standard operating procedures, echoes the actual decisions of former Prime Minister Naoto Kan and his cabinet in the aftermath of the Tohoku and Fukushima disasters. The film accurately reflects the opinion that Kan’s administration mishandled the scale and long-term effects of the disasters. Kan’s administration downplayed the meltdown and suppressed reports of high radiation levels in order to supposedly retain their reputation, secure their power, and avoid the costs of the disasters. However, widespread criticism led to Kan’s eventual resignation from office. The film’s essential point of view on Japanese politics creates a critical assessment against the “cover-your-ass” technique used by older Japanese bureaucracy to protect themselves from possible criticism or legal repercussion. This, in turn, greatly compromises the effectiveness of public action in the face of disaster and afflicts the welfare of the nation as a whole.

By comparing the legacy of the 2011 Tohoku and Fukushima disasters with the rampage and devastation wrought upon society by Godzilla, the political message of Shin Godzilla is this: people in positions of power have to take responsibility for their actions. Despite how those actions might compromise their personal interests, government members must use their power, granted to them by the democratic process, for the sake of their nation – especially during a crisis such as this. The team of informal but hardworking scientists assembled by Yaguchi spends a good part of the latter half of the movie by stating that, if all goes wrong with their plan, they will take the blame. This theme brings the film full circle and delivers the emotional payoff, that someone is finally willing to take ownership of the problem and put their career on the line for what they believe is the right course of action.

This criticism of government inaction towards grave situations, and how officials make the problem worse by failing to respond immediately, can potentially strengthen a sense of political collaboration. When confronted with such distressing events, actors have to strive towards a common goal no matter the costs. Although this may seem idealistic in today’s society given the abundance of government complacency, the destruction caused by Godzilla produces a solid reflection on inefficiency, lack of accountability, and misuse of power within the government. As such, if the message of the film isn’t destined to gain much influence in politics, it still holds an undeniable power on the people who end up watching it, as they can relate to the narrative and subsequently renew their critical judgment of their government. This sentiment is inspired from a work of fiction, but it is one that goes beyond simple entertainment and becomes much more significant to human reality.

Shin Godzilla had its North American limited theatrical run in October, but should be released on VOD (video on demand) and home media in the near future.