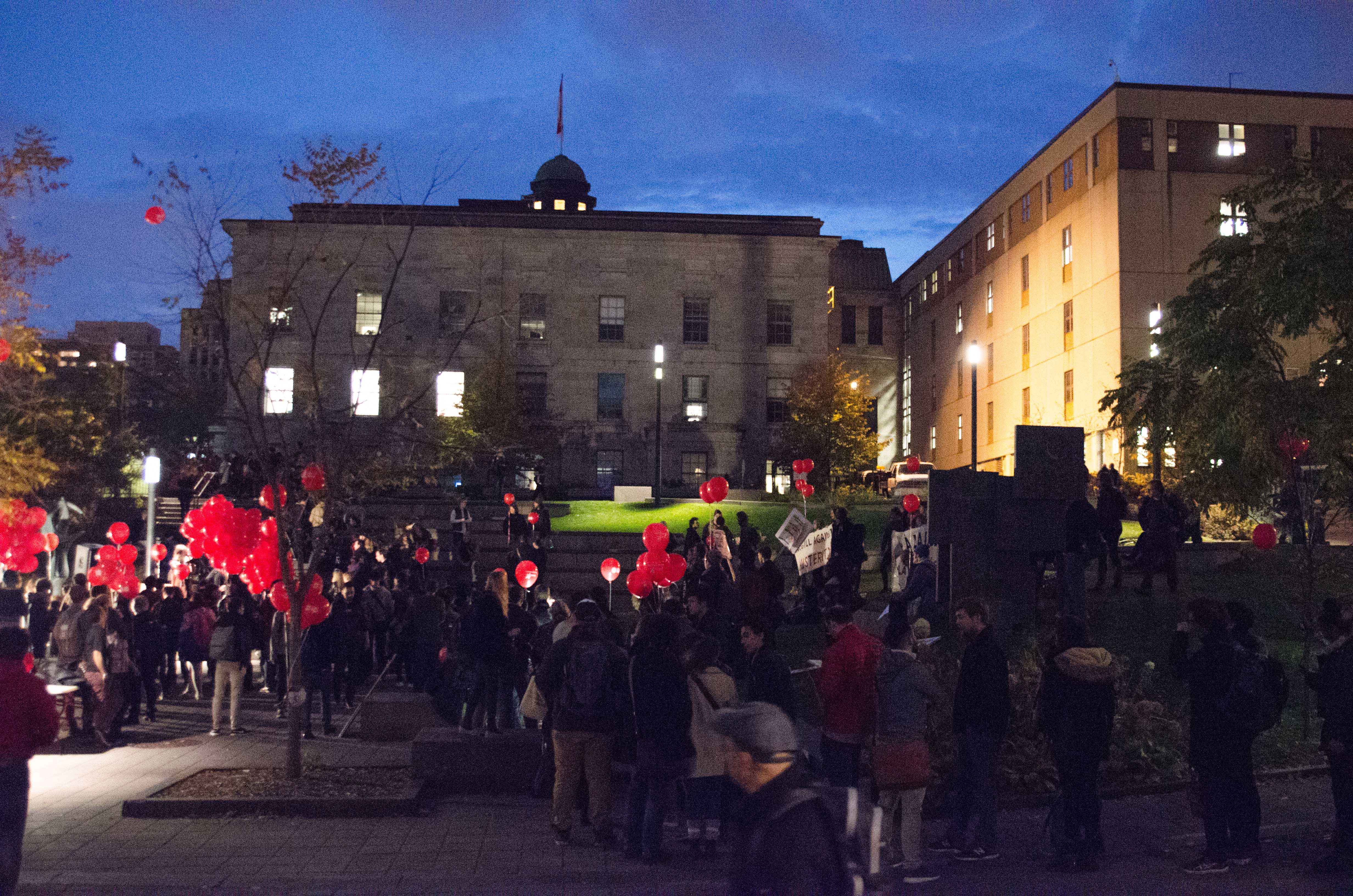 On Wednesday, November 2, Media@McGill, a self-described “hub of research, scholarship, and public outreach on issues and controversies in media, technology, and culture” at the University, hosted former National Security Agency (NSA) contractor Edward Snowden via videoconference in Leacock 132.

Snowden gained international notoriety in 2013, when he leaked thousands of confidential NSA documents to journalists from The Guardian and The Washington Post. These documents revealed collusion between the NSA, other national intelligence agencies including the Canadian Security Intelligence Services (CSIS), and a variety of technology and communications companies, in order to gather the private data of billions of people worldwide.

Since he fled the United States in 2013, Snowden has lived in Russia, where he has been granted temporary asylum, although the U.S. government is engaged in constant efforts to extradite him on charges of theft of government property and treason.

Meanwhile, he has given numerous interviews and lectures, in person in Moscow or by videoconference.

His appearance at McGill coincided with a developing scandal over the Service de police de la Ville de Montréal (SPVM), and its widely condemned surveillance of several Quebec journalists, most notably Patrick Lagacé, a writer for La Presse. In the days leading up to his lecture on campus, Snowden had tweeted his condemnation of the SPVM’s actions.

The videoconference also coincided with the final day of a five-day strike by the Association of McGill University Support Employees (AMUSE), which had begun on Saturday, October 29. Since April 2015, AMUSE has been without a Collective Agreement, and has been negotiating with the administration for a $15 minimum wage, paid sick leave, access to the benefits provided to most non-casual employees on campus, and improvements to the Work Study Program. The union decided to strike in response to McGill’s continued unwillingness to compromise.

A few hours before Snowden’s talk, AMUSE released a statement saying that they would be picketing the event.

“Were we not on strike, AMUSE members would be staffing this event,” read AMUSE’s statement. “This event, taking place on McGill campus, at the workplace of our members, means that it falls within the jurisdiction of our strike.”

“If you attend this lecture,” it continued, “you are crossing the picket line of a legal labour strike. To cross this picket line is to undermine the strength of our strike and stand with the employer instead of the workers.”

The talk had been scheduled to begin at 7 p.m., but Media@McGill employees under AMUSE and their allies had already been at the entrance to Leacock 132 for roughly two hours.

“If you attend this lecture, you are crossing the picket line of a legal labour strike. To cross this picket line is to undermine the strength of our strike and stand with the employer instead of the workers.”

Indeed, Media@McGill hired several volunteer workers to replace the AMUSE members who would have staffed the event.

While union members stood in front of Leacock 132, AMUSE, in coordination with McGill Against Austerity, simultaneously organized a protest in front of the James Administration Building. Organizers spoke to those waiting in line for Snowden.

The line, which began in front of the main Leacock entrance, reached all the way around the James building, stretching as far as the Wong Building.

“Basically we want people to know that they’re crossing the picket line, so by all of us being on strike we’re not able to work the event, and so the event, if it continues, will have to replace us with volunteer labour.”

“There are many, many reasons I’m here today,” AMUSE member Parker Finley said to the crowd. “We’re here to show our support for decent work, fair wages, respectful and legal contracts, or contracts at all, or just one contract that covers the total amount of time that you can be hired to work, for employment protection, for priority in applying for jobs that you have already performed.”

“How great is it that McGill hires casuals under the same job description, the same job terms, even if it has the same job title and pays them nine dollars less per hour?” Finley asked, eliciting boos from the crowd.

“How great is it that McGill can offer a job for a year and half, only to give you six-month contract installments with no guarantee or protection that you will indeed be hired for the duration that you have been hired for?” he continued. “How great is it that McGill makes students who need financial aid jump through hoops and bureaucracy only to make minimum wage, have zero sick days, and maybe not even be able to find all the available postings?”

Michelle Hartman, an associate professor at McGill’s Institute of Islamic Studies, also spoke at the protest.

“As a professor here, I am a non-unionized worker,” she said. “So I’d like to thank all of you who are unionized workers for coming out and […] going on strike because this – workers standing up for themselves – doesn’t just benefit all of you, but it benefits all of us.”

“How great is it that McGill makes students who need financial aid jump through hoops and bureaucracy only to make minimum wage, have zero sick days, and maybe not even be able to find all the available postings?”

“Other profs might not be on the microphone,” she continued, “but your work is appreciated. There are professors in solidarity with all of you. There are a lot of us who really, really appreciate what you’re doing, and it’s so important that you keep pushing for this. Keep pushing for fair conditions, to have your work recognized, to have your positions be recognized as proper work and to earn proper pay.”

Security had initially told people to wait outside the Leacock Building, but papers taped to the floor at the doors to Leacock 132 suggested otherwise, reading “SNOWDEN VIDEOCONFERENCE: LINE-UP STARTS HERE @ 5:30PM.’” As such, a group of roughly 150 people bypassed the line outside, and congregated in the lobby of Leacock, growing increasingly impatient.

While AMUSE members gathered in the entrance of Leacock 132 holding flyers and picket signs, McGill Security employees stood in front of them, blocking the crowd assembled in the lobby from accessing the auditorium.

“So I’d like to thank all of you who are unionized workers for coming out and […] going on strike because this – workers standing up for themselves – doesn’t just benefit all of you, but it benefits all of us.”

Many event attendees expressed varying degrees of frustration with Security, as the scheduled start time for the talk passed, with no sign that they would be allowed to enter the room. The situation was exacerbated by conflicting information regarding where the line was supposed to start.

Furthermore, at least one Security employee managing the crowd outside the Leacock Building reportedly told those in line that AMUSE members were causing the delay. In reality, the striking workers were engaged in a soft picket; that is, they had no intention of physically preventing anyone from entering the auditorium, and simply wished to inform those attending the talk that they would be crossing a picket line.

Partly as a result of this, a great deal of misinformation seems to have been spread about the picket, resulting in a misplaced sense of outrage against AMUSE from some of the attendees. While many in the crowd expressed solidarity with them, others chanted “fuck your strike!”

When Security eventually allowed students to enter the auditorium, students, who were aware there weren’t enough seats in Leacock 132 to accommodate everyone in line, began to push and shove to get in. AMUSE members appealed to attendees not to cross their picket line, but without much success, as Security personnel ushered people through the doors one by one, and hundreds of people pushed from behind to get in.

“You are literally supporting a university that conducts research into military surveillance,” shouted one AMUSE picketer. “Do you not see the irony in that?”

Ultimately, a representative of AMUSE’s parent union, Public Service Alliance of Canada, instructed the picketers to leave the building through a discreet back entrance for their own safety.

When the auditorium met its capacity, Security closed the door, with many students still upset that they had been refused entry. It was announced that Leacock 26, down the hall, had been opened to accommodate overflow. Students again rushed to the door, with many pushing and shoving to get through. At least one student was hurt in the process.

“I was with a friend towards the front of the line for Snowden, in front of the Arts [building] doors or thereabouts,” a student who wished to remain anonymous told The Daily. “They were letting people in in increments […] and there was a massive stampede of pushing and running every time. I was on the edges during one stampede, and I was pushed and fell. I landed on [my] elbow.”

That student later went to go see a doctor as a result of their fall. “The doc says it’s probably a small fracture or a bone chip,” they continued. “People around me saw, but those not next to me or behind me kept running. I don’t know where Security was, […] it was so scary and hectic.”

In an interview with The Daily in the Leacock lobby after the doors had closed, Darin Barney, an associate professor of Communication Studies and a member of Media@McGill’s Steering Committee, spoke about Media@McGill’s role in the planning of the event.

“They were letting people in in increments […] and there was a massive stampede of pushing and running every time. I was on the edges during one stampede, and I was pushed and fell. I landed on [my] elbow.”

“Whether [AMUSE] was physically preventing anyone from entering the room, I don’t know,” he said. “I just know that they were present there, and so it became the responsibility of the event’s organizers to ensure nothing unsafe happened at that point, because […] there was [..] the potential of some kind of encounter between a group that was exercising a perfectly legitimate act of freedom of expression […] and labor organization, and a very large group of people who wanted to get into that room.”

“Even the potential of a serious physical conflict between those two groups had to be avoided,” he continued, “and I think what [Media@McGill] did was successfully avoid that. Some other things fell by the wayside in order to achieve that, such as a very large delay for the event [and] a large number of people who had been waiting not able to get into the event. I regret all of that, but I don’t lay responsibility for that either at the feet of the picketers or Media@McGill.”

“It just so happens there was a massive event planned for McGill on a night when a trade union, whose workers were to work that event were on strike, so they put a picket up, that was the situation,” he added.

“I regret all of that, but I don’t lay responsibility for that either at the feet of the picketers or Media@McGill.”

*The McGill Daily chose not to report on the Snowden lecture as a show of solidarity with AMUSE.