Not your typical nudes 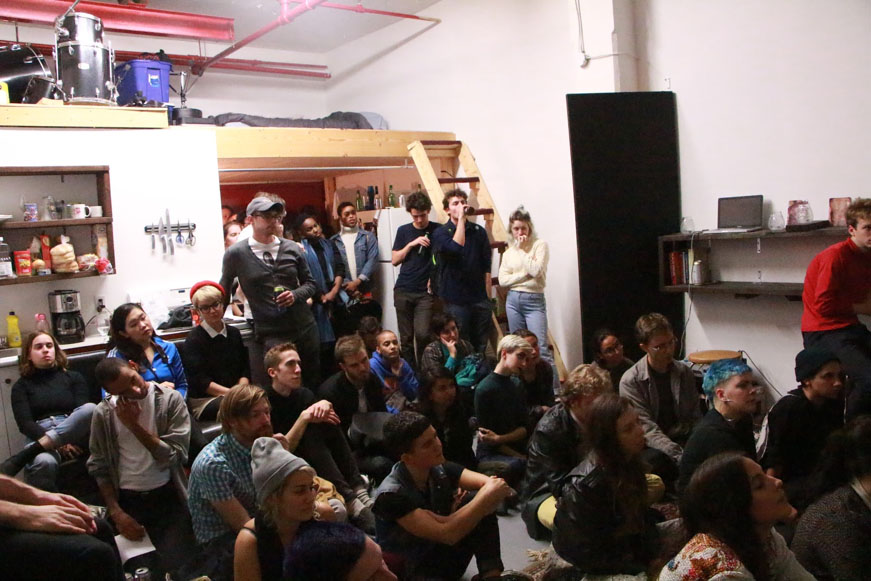 New Montreal-based literary magazine, Bad Nudes, celebrated the release of its first issue on October 15. The magazine publishes poetry, fiction, and visual art. The content is wide-ranging, incorporating modern poetry along with comedic short stories and drawing. Many guests squeezed into the apartment of Fawn Parker and Thomas Molander, the magazine’s founders and head editors, to hear the readings being performed by several contributors from Issue 1.1.

Bad Nudes 1.1 is currently available online at badnudes.com. However, Molander says the magazine is hoping to publish further issues in print. “The real problem is cost, but we’re hoping to get some grants,” Molander said.

Molander, who comes from British Columbia, and Parker, from Toronto, are both creative writing students at Concordia University. Bad Nudes is a project they came up with together several months ago when they were reading their friends’ writing, and realized the need for a new platform to showcase the talent they saw. When asked about where they got the idea for the name, they said they had originally come up with it as a band name, but instead, decided to use it for their magazine.

What’s different, I think, is that we really don’t have anyone to look up to in a literary sense.

Bad Nudes 1.1 features mostly fellow Concordia students, plus a few writers based in Toronto, the U.S., and British Columbia. Most of the authors are well established writers, with publications in their portfolios ranging from The Globe and Mail to Metatron.

Brad Casey, founder of Toronto-based literary journal, The 4 Poets, came all the way from Toronto to perform at the launch. Casey expressed his appreciation for Bad Nudes, saying that they’re filling a niche in terms of quality online literature. “[Molander and Parker have] got it pretty figured out […] There’s not many websites out there publishing this kind of work,” Casey said. “I’m happy that Bad Nudes is around now.”

Everyone involved in Bad Nudes is extremely enthusiastic about the magazine, and excited to see where it will go in the future. Those who attended the launch party were treated with interesting performances ranging from traditional form poetry, to experimental poetry, to short stories that had the entire audience laughing.

The Daily spoke to Brad Casey and Fawn Parker via email about their involvement with Bad Nudes.

The Mcgill Daily (MD): You’re a contributor to the first issue of Bad Nudes. How did you hear about the magazine?
Brad Casey (BC): Fawn Parker is a label mate, of sorts […] We’ve both been published by Metatron, so we’ve met and follow each other online. She posted on Facebook asking for submissions […] Fawn Parker is a wonderful writer who I admire and so I trusted that whatever she created would be something I’d want to be involved in.

MD: As the founder of another literary magazine, do you see any differences in the approach that Bad Nudes is taking?
BC: Both publications are seeking out new, exciting writers in the Canadian landscape who may not necessarily be published elsewhere. And it’s a healthy environment right now. Everyone is supportive and open to sharing. It’s like all ships rise with the high tide.

MD: What makes Bad Nudes different than other literary magazines, here in Montreal and elsewhere?
BC: There’s a great literary scene being fostered in Canada right now which includes young writers frustrated with the state of publishing. Many literary magazines are highly academic and don’t recognize less formal writing from young, talented writers full of potential because it wouldn’t work with their audience, [who are] used to a cerebral, emotionally flat form of writing. There are also so few literary presses publishing new writers. The major presses like Harper Collins, in Canada, no longer actively seek out new work unless it’s from authors already established. Bad Nudes is one of the few magazines stepping in to foster those great, highly undervalued writers.

MD: Bad Nudes is exclusively online at the moment. Do you see this as an advantage or disadvantage for the magazine?
BC: Print and online have their own unique advantages and disadvantages. Online can be a jumping off point to be published in print. But [you can also] work with many writers, quickly, from all over the world and develop a much larger audience.

MD: Your own poetry features a diversity of forms and content. Do you think this reflects Bad Nudes as a magazine? In your opinion, what does Bad Nudes offer the reader?
BC: I didn’t write those pieces exclusively for Bad Nudes so I don’t know how it might reflect on them. It was only what I had to offer. As far as what they have to offer the reader, I think, [they can offer] a good look into some talented writers who will be our generation’s next great voices.

The Daily also interviewed Fawn Parker about founding the magazine.

MD: What makes Bad Nudes different than other literary magazines, here in Montreal and elsewhere?
Fawn Parker (FP): What’s different, I think, is that we really don’t have anyone to look up to in a literary sense. Like I think partly this thing was birthed out of a frustration with the literary community. It’s so rare that I will pick up (or go online and look at) a lit mag and feel […] excited about what I’m reading […] What [this current state of publishing] does for us, in my opinion, is it forces us to really scrap all of our ideas about how a magazine should be and build something new. We just publish what we think is good, and we make it [look] cool and that’s about it. So I think that we’re really just pushing out good work and we have no other agenda. If we never make a dollar, at least we have this space where all of this good stuff is collected.

MD: What made you want to create an arts magazine?
FP: I think it’s just one of those natural points in a certain series of events. You know, you get a degree in literature, you’re not really good enough to get a book out there but you’re starting to get into all of these magazines. I’ve been working for journals for about 4 years now and I guess I just started to feel [confident]. Plus Thomas [Molander] is so on my wavelength creatively — we really just get shit done when we work together, and I think it’s mutually […] inspiring. Sandy [our designer], too. When we asked him to join the team it was a good idea.

MD: What are the advantages and disadvantages of your magazine being only online?
FP: The advantages are that it’s incredibly accessible. Sandy introduced us to the “web brutalism” movement, and I’m going to get this wrong if I say too much but one sweet thing about it is that you can load it on […] any connection speed, probably. It’s just this really simple page with a bunch of text. On the other hand, going to print is kind of like making it. That takes money, which is a pretty obvious signifier of success. And you know, I would of course just like to be able to have our stuff on my shelf.

MD: Does Bad Nudes have an overarching philosophy behind it?
FP: I’m not sure. We talked about this a lot at the beginning and then kind of dropped it. When you’re applying for grants, it kind of forces you to think about that kind of thing. But really we just want good work to be pushed out there. Politically, we are careful, of course. We won’t publish anything that we feel is bordering on […] sexism, racism, transphobia, homophobia, that kind of thing. I feel a certain responsibility as a woman working with 2 men to really make sure we’re representing female-identified voices. I won’t organize a reading if less than half of the readers are women and/or queer people, and if I’m soliciting I reach out to them first.

MD: Is there a specific type of art that Bad Nudes hopes to exhibit?
FP: What we really want, I think, is stuff that just has an awareness to it, and a certain amount of restraint. I like funny stuff, but obviously it can’t all be funny. Emotional [writing] is good too. Anything [goes] as long as the timing and delivery are good. We just want people who have something to say and have an idea of how to say it in an interesting way.