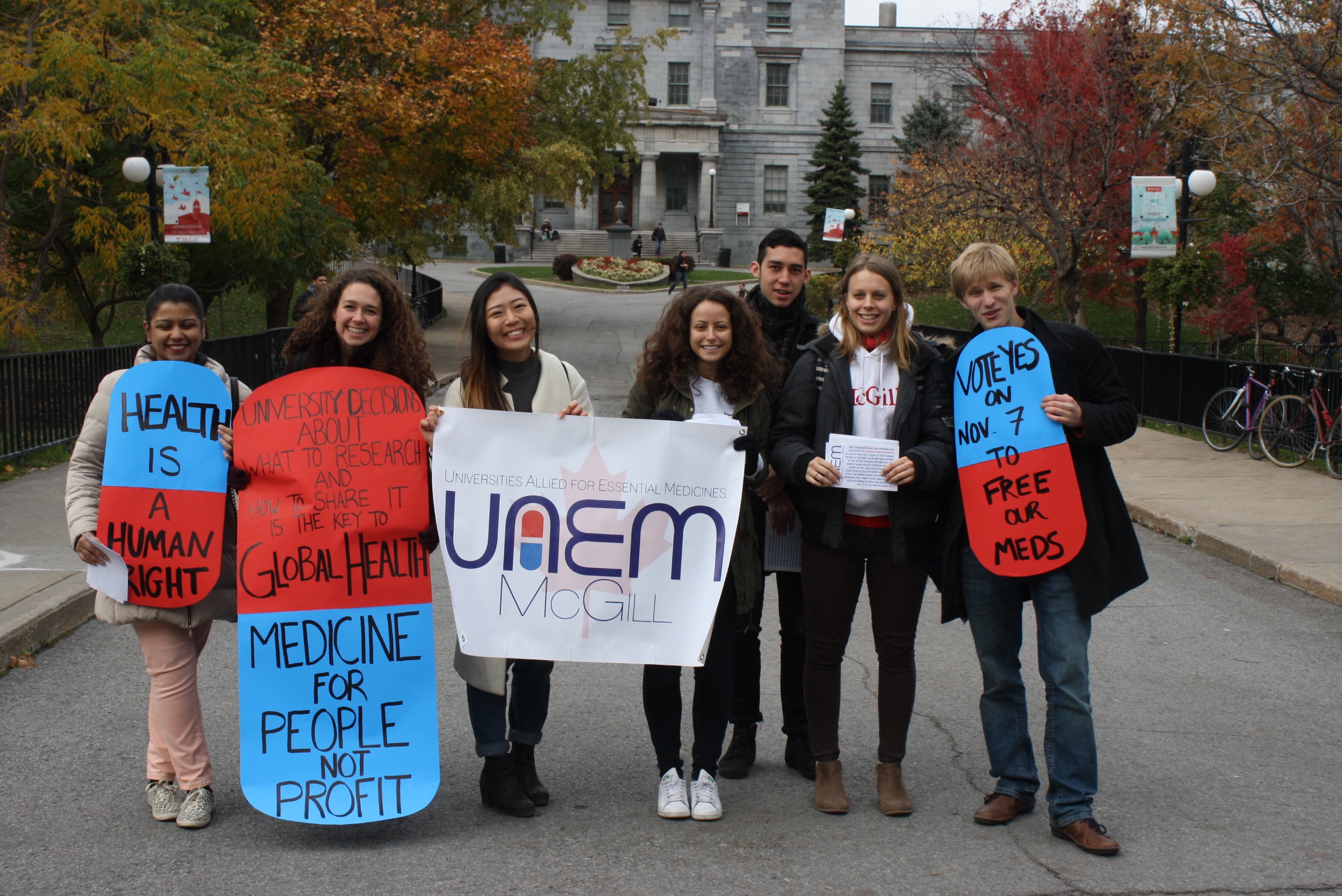 On October 16, the McGill Students’ Chapter of Universities Allied for Essential Medicines (UAEM) could be seen standing at the University’s Y intersection, launching their campaign to raise awareness about their upcoming SSMU General Assembly (GA) motion aimed at improving global accessibility to medicine.

UAEM describes itself as a global student organization that seeks to improve innovation, access, and empowerment in the field of international healthcare. If the McGill chapter’s motion passes on November 7 at the GA, the motion will push the University to “adopt an open access framework for all future medicine patents created at McGill and sold to the private sector.”

Peter Grabitz, UAEM’s European coordinator and member of the McGill chapter, explained in an interview with The Daily why UAEM McGill introduced their motion.

“[Our] basic issue is that a lot of research, that is eventually leading to innovation, is done at the university level,” Grabitz explained. “However […] once the University is licensing and patenting innovation in a way that allows the product to be bought up [and monopolized] by a company.”

“The public is basically paying two or three times [the product’s cost],” he explained. “They’re first paying for the basic research, and then they’re paying for the marketing, and the profit margin of the company afterwards. One easy way to stop this is changing the licensing condition at the university level.”

“What we want to do,” he added, “is to have McGill introduce licensing conditions that ensure global access to medicine and to the innovation that comes out of it.”

While McGill’s UAEM chapter has been active for five years, this is the first time that the student group is bringing forth a motion, entitled “Policy Regarding Global Access to Medicines”, to a SSMU General Assembly in order to implement concrete action to secure institutional accountability.

“The McGill chapter first and foremost wants to push for the access framework at an institutional level at a General Assembly motion,” said Sonia Larbi-Aissa, Co-President of UAEM McGill and a former Daily editor. “What [the motion] is, is actually a policy that would become an official agenda item for SSMU senators for the next five years.”

The motion overall emphasizes accessibility in the hypothetical event of a humanitarian health crisis. Drawing parallels between the 1990s HIV/AIDS epidemic and the 2013-16 West African Ebola virus epidemic, Larbi-Aissa explained that “in the event of a humanitarian crisis like that, […] this document that we cite in the motion states […] that what would happen is that the patent and that drug would be available in the developing country in question.”

“What we want to do is to have McGill introduce licensing conditions that ensure global access to medicine and to the innovation that comes out of it.”

“People would never be able to afford the market price of that drug,” she continued, “because pharmaceuticals are pricing it at monopoly prices, which are above the fixed cost of producing the drug.”

Speaking about the importance of student involvement, Christine Kim, U3 Pharmacology student and Co-President of UAEM McGill, stated that the issue of inaccessibility in international healthcare is rarely critically engaged with in academic study.

“I’m a pharmacology major and even the students who learn about this issue, they learn it in a very different manner from how we’re doing it here and during our workshops and meetings,” she said. “I think it’s important for there to be an organization from the students on the other side of things. […]There’s also a large amount of students that don’t even learn about this in class,” Kim added.

Chloe Hogg, a U3 Arts student who founded three chapters of UAEM in Melbourne, Australia, spoke about the importance of realizing the power McGill wields in how it licenses research.

“The way basic research is licensed off by big research institutions like McGill makes it unavailable to developing countries because the prices are so high,” she clarified. “We want to change McGill’s policies so that medicines are more accessible to all.”