In Search of the “Shadowman” 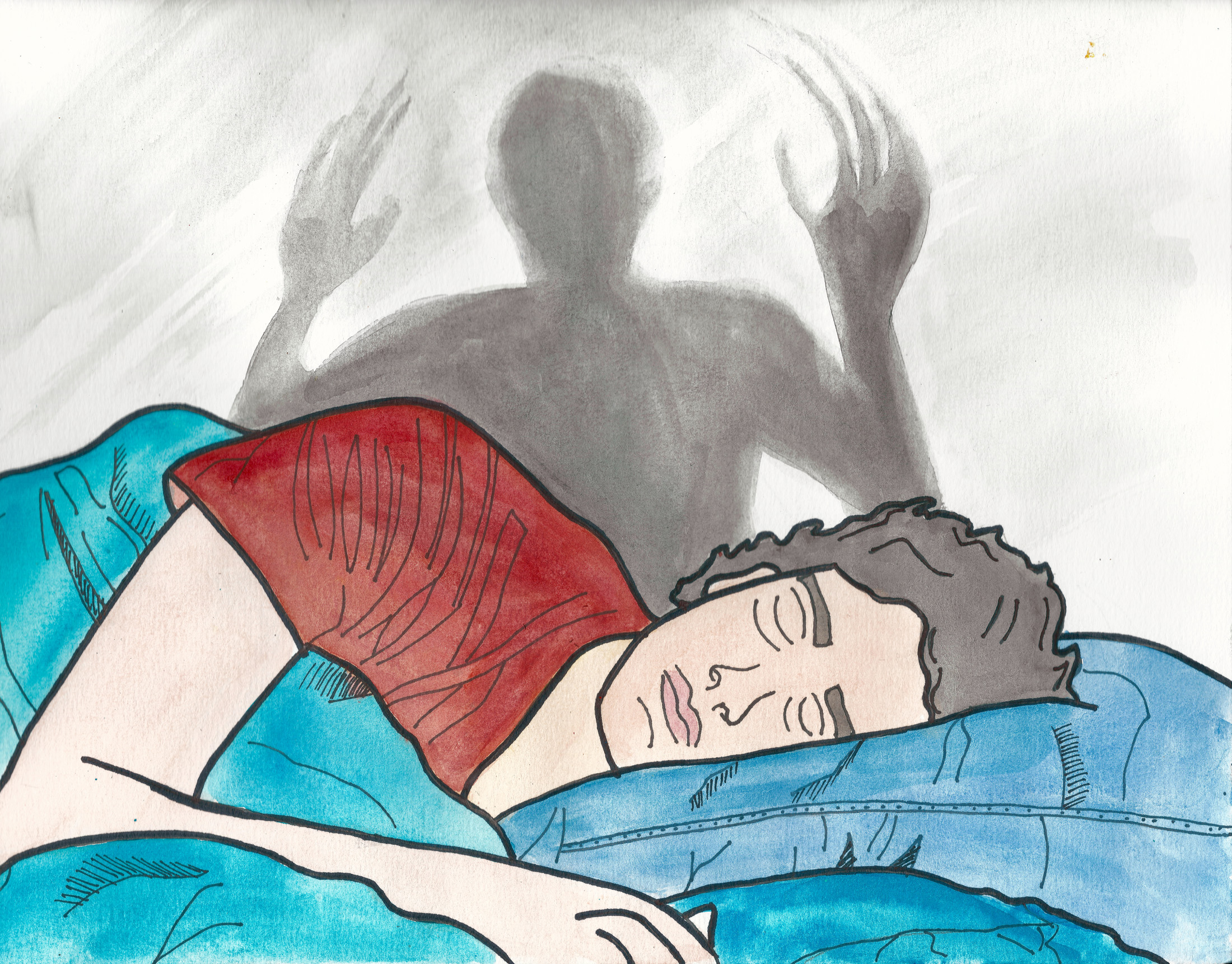 At the Musée des Augustins in Toulouse, France sits a haunting sculpture of a woman being tormented by a demon sitting on her, while she is asleep. Sculpted by Eugène Thivier in 1894, “Le Cauchemar”, which translates to “The Nightmare,” is this sculptor’s most noteworthy masterpiece. It is believed to be inspired by the famous Henry Fuseli painting “The Nightmare”,which was exhibited at the Royal Academy of London more than a century before the installation of this sculpture. With wide interpretations ranging from the depiction of heartbreak, loss and sexual desire to the visualization of dreams and nightmares, this painting has proven to be an inspiration for many artists and poets alike.

Following its exhibition, Erasmus Darwin, the famed poet and naturalist philosopher described an unsettling experience of feeling helpless, immobile but awake during sleep in his poem titled ‘The Lover of The Plants’ in 1792. He adeptly goes on to describe the state of paralysis and the vision of a demon-like creature upon the chest of a woman. Along with him, many great authors such as Charles Dickens, Edgar Allen Poe and Herman Melville have all written about such experiences in their books. However, it wasn’t until 1928 that a famous British neurologist, Kinnear Wilson first set out to describe these attacks precipitated by a terrifying dream as “sleep paralysis.”

Today, sleep paralysis is described as a phenomenon in which an individual experiences brief periods of immobility, inability to speak or react while falling asleep or awakening. Why has something so simple been described as a terrifying experience?

Imagine that you have had a long and productive day. You are tired and all you want to do is sleep on your comfortable bed. You fall asleep, but instead of dreaming, you are awake and confused. You see a shadow-like figure approaching you. You want to move to get a clearer view, but you can’t because you are paralyzed. This shadow-like creature is inching closer and closer to you. You want to scream for help but no words come out of your mouth. You now feel something heavy sitting on your chest and feel an unsettling presence in the room which you can’t shake off. You are locked in, helpless and terrified.

If this sounds familiar, you are not alone. According to a study conducted on over 36,533 people by researchers at the University of Pennsylvania, about seven per cent of the general U.S. population have experienced an episode of sleep paralysis. With erratic working hours, high amounts of stress and anxiety, it comes as no surprise that over 28.5 per cent of students have reported experiencing sleep paralysis. While sleep paralysis itself isn’t fatal, it is considered to be one of the most frightening experiences one can face. Many have wondered what separates sleep paralysis from a scary dream, the difference lies in the fact that during an episode of sleep paralysis, the sleeper is awake, paralyzed and begins to hallucinate. All this occurs in a sleep state known as the Rapid Eye Movement (REM) phase. While a scary dream or night terror occurs when the sleeper is in the non-REM state (NREM). The hallucinations that accompany the brief periods of immobility are described to be the terrifying aspects of sleep paralysis.

These frightening experiences have been cited in a number of ancient mythologies and folklore across various cultures, going on to show that these haunting episodes have provided for a common source of nighttime terror across the world. Interestingly, the majority of hallucinations experienced by people are influenced by folklore and stories from their culture. With various accounts of spiritual and supernatural explanations ranging from witchcraft to extra-terrestrial attacks the influence of cultural entities is remarkable in sleep paralysis. Further described in depth in the book Sleep Paralysis: Historical, Psychological, and Medical Perspectives written by Brian Sharpless and Karl Doghramj, the multitude of references that have been made to the phenomenon of sleep paralysis is clearly explained. But why does the brain create these episodes?

With erratic working hours, high amounts of stress and anxiety, it comes as no surprise that over 28.5 per cent of students have reported experiencing sleep paralysis.

There have been many theories put forth to try and explain the mechanisms of sleep paralysis. One of these stems from the understanding that the brain switches from one state of sleep to another far too quickly. Adrian R. Morrison in A Window on the Sleeping Brain describes the neurophysiology of sleep. When we sleep, our brain moves through five stages, of which one of the most prominent is the REM phase. During REM, the brain electrical activity is very similar to that of a person who is awake and the person begins to dream. The dreamer’s muscles are paralyzed to ensure that they don’t act out their dreams. To enable this paralysis, certain chemicals in the brain that activate the neurons responsible for motor function are inhibited. It is believed that as we cycle between phases of sleep, the body ensures that the required levels of these molecules are also maintained. However, in the event of improper regulation at an unexpected phase, the body can remain paralyzed when it is required to achieve a state of arousal. While the muscles are still paralyzed, the person can begin to wake up from slumber only to be unable to move. Thus the sleeper experiences the dream-like characteristics of REM accompanied with paralysis.

However, what was assumed to be a simple interplay between molecules has now been shown to be a very complex mechanism. A study focusing on the neural substrates responsible for sleep paralysis at the University of Toronto has indicated that the specific role of the inhibitory molecules and their ability to override the subsequent activation of the muscles is to be re-evaluated. With further work being done in their lab, they have found that no single mechanism is responsible for the REM sleep paralysis. They were able to investigate the role of an additional inhibitory neurotransmitters (endogenous chemicals allowing communication within the brain) such as GABA, and found that this, along with glycine, play a key role in regulating the state of paralysis during REM. What remains to be investigated is how these molecules regulate this paralysis.

Scientists are still searching for the root cause of the episodes themselves. Many studies have pointed toward a disrupted sleep cycle and anxiety as important triggers. Combined with tiredness and high levels of stress and mental health conditions, it is surprising that more research is not devoted to elucidating the mechanisms of sleep paralysis. Sam Kean, in his book The Tale of the Dueling Neurosurgeons, describes his encounter with sleep paralysis. He attributes sleeping in a supine position (on the back) to be a reason for his sleep paralysis episodes. In “The Nightmare,” a critically acclaimed documentary directed by Rodney Ascher, eight people chronicle their struggles with sleep paralysis. All of them have different prompts that provoke an episode of sleep paralysis, where each episode is more horrifying than their previous one. While the underlying causes of sleep paralysis are still unclear, what remains a mystery is how the brain conjures vivid and frightening life-like figures when it happens.

During episodes of sleep paralysis, hallucinations involve all the sensory regions of the brain thus enabling people to see, hear or sense the presence of an outsider in their room. Commonly viewed as a shadowy figure, this intruder usually has the characteristics of a human being – in terms of height and body shape. While in most cases, the shadow figure does not have facial features, most experiencers interpret this shadow-like figure as per their cultural ideas. Baland Jalal and V.S Ramachandran from the Centre of Brain and Cognition at University of California at San Diego postulated that when a person experiences sleep paralysis, they have a distorted sense of their body image. They go on to say that specific brain regions such as those in the right parietal region are altered, which may lead to an “alternative sense of self” that is able to feel movement in limbs despite being paralyzed. Interestingly, they hypothesize that this alternative viewpoint is a result of the “internal hard-wired body image.” For example, they say that should a person with an amputation or body image disorder like anorexia nervosa face an episode of sleep paralysis, there is a higher probability that they will hallucinate a “shadowman” mirroring their own internal body image. While this provides for an interesting albeit peculiar theory, we still wonder if there is a way to combat the shadow-people.

Many people who have experienced sleep paralysis have noted that keeping a sleep log and maintaining a sleep routine involving a regular sleep time and sufficient hours of sleep can help in minimizing the onset of sleep paralysis episodes. Baland Jalal, in his paper titled “How to Make the Ghosts in my Bedroom Disappear?” talks about using a focused-attention meditation in conjunction with muscle relaxation therapy as treatment options for sleep paralysis intervention. He shows that using four steps namely, understanding the meaning of the attack, using emotional and psychological approaches to distance from the attack, meditating while that involves inward focused attention, and finally, utilizing muscle relaxation could help alleviate the fear and anxiety associated with sleep paralysis.

In search for answers to this terrifying phenomenon, people around the world have begun to share their experiences. While still preliminary in their approach, scientists have begun to pay more focus and attention to what’s responsible for the “shadowman.” Sleep paralysis, though a terrifying experience, could pave way for examining the fascinating biology behind sleep and why we dream.