Sharing, and working with, space 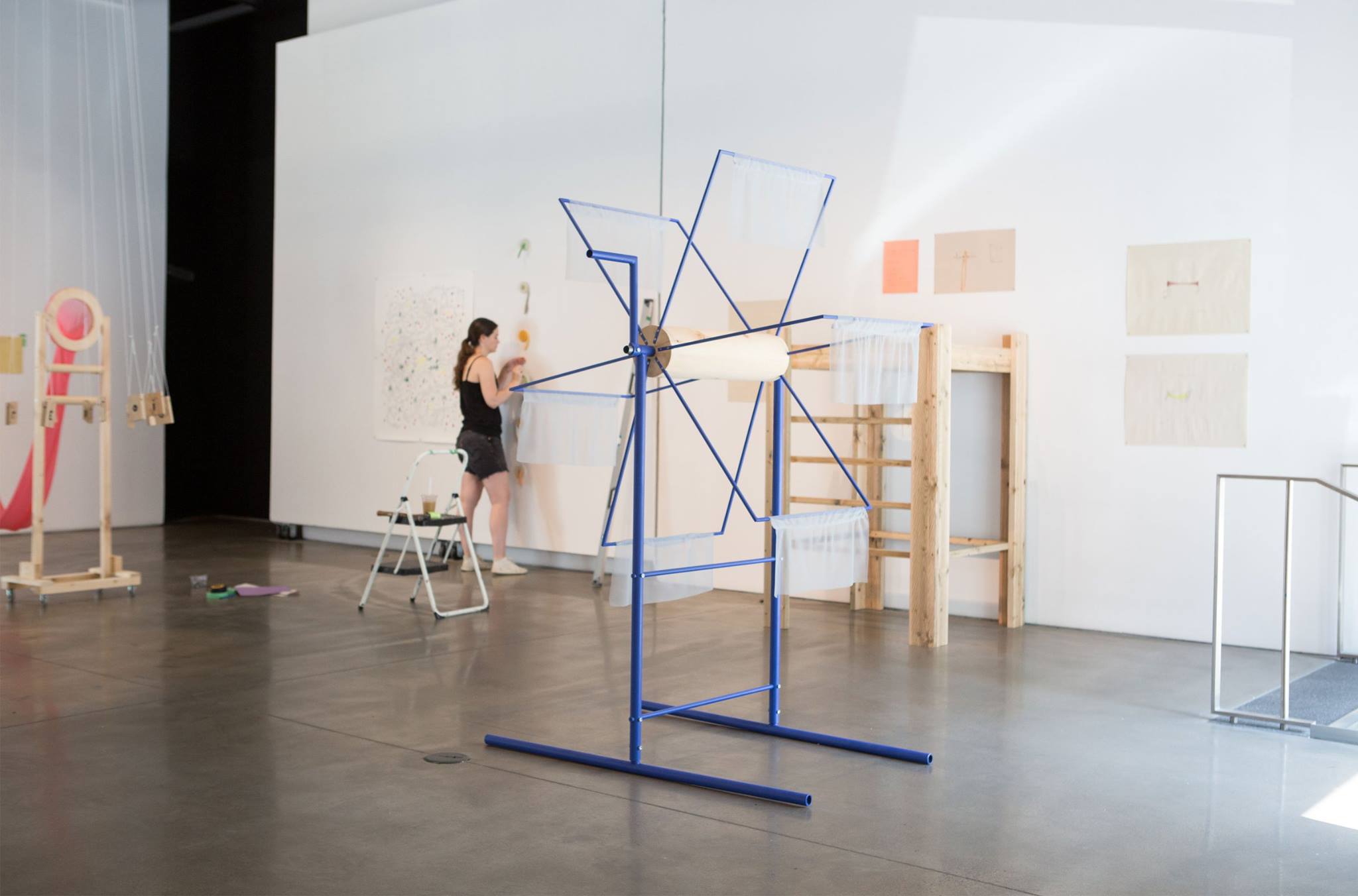 The program concluded on August 26 with a finissage and walk-through, lead by featured artists Steffie Belanger and Rebecca Munce. The gallery, currently serving as a studio, has been open all summer, allowing visitors to explore the sprawling work space and the process of production.

Belanger’s work is largely concerned with the practical uselessness of the art object. “I took some risks during this residency,” she explains in an email interview with The Daily, “I used materials that I usually don’t, but […] I followed my usual way of processing ideas.” Throughout the residency, Belanger found that round and circular shapes emerged strongly in her kinetic sculptures, which rely on physical motion for artistic effect. Her use of these shapes draws on the historical function of circular forms, such as the forms used in designing tools like the wheel. By rendering these previously functional forms useless, Belanger highlights, with a sense of irony, their lack of practicality as artwork.

[With] fine lines and pastels, Munce creates a dreamland – one rife with hedonism and carnality.

As her sculptures often take on a performance-like quality, a key element to Belanger’s works is their anti-climatic effect. Belanger intentionally misdirects the audience’s attention by creating structures that perpetually move and appear complex, but ultimately accomplish nothing in practical terms. “The […] sculptures,” Belanger explains, “are all about doing something powerful [but ultimately meaningless] as a gesture. But I still want [people to experience] a certain degree of climax and expectation.”

Meanwhile, Rebecca Munce creates drawings that manipulate both filled space and negative space. By working with extremely fine lines and pastels, Munce creates a dreamland – one rife with hedonism and carnality. While aesthetically, her drawings are reminiscent of children’s book illustrations, the darker themes in her work are revealed in her composition, which allows empty spaces to act “as living consumable things that have the potential to hurt and be hurt.” Munce’s composition diverges from that of a typical illustration, lacking foreground and background as well as logical proportion between human forms and objects. This subverts the traditional practice of giving precedence to human forms, and puts all aspects of the drawings on equal ground.

“The […] sculptures are all about doing something powerful [but ultimately meaningless] as a gesture.”

In physical proportion too, Munce does not favor human forms over nonhuman objects in her drawings, explaining that “objects and belongings become as important, if not more so, than the [human] subjects themselves in exposing narrative.” According to the artist, stories sometimes unfold in ways that do not conform to linearity, and objects are not subordinate to figurative actors. Munce explains, “I see narratives as non-linear. When building spaces and narratives, I am interested in the sense of collective concurrent time as opposed to singular chronological spaces.” Negative space in her drawings is thus also pregnant with meaning, as she explores how empty spaces can be agents in their own right.

Though the program was not intended to be a collaboration, both Munce and Belanger admit that it was difficult to avoid influencing each other’s work while sharing a workspace. “[Not being alone] in a studio is really important to me. Conversing about [my uncertainty] helps me resolve problems, just because to formulate what’s wrong makes you see it clearly,” Belanger explained. Munce added that her own art was altered by sharing space with someone who was also working with both two-dimensional and three-dimensional effects, “I ended up working on [their relationship] more so than I thought I would.”

By dispelling traditional artistic practices, both artists seek to utalize space to create a reality different from the typical expectation of art.