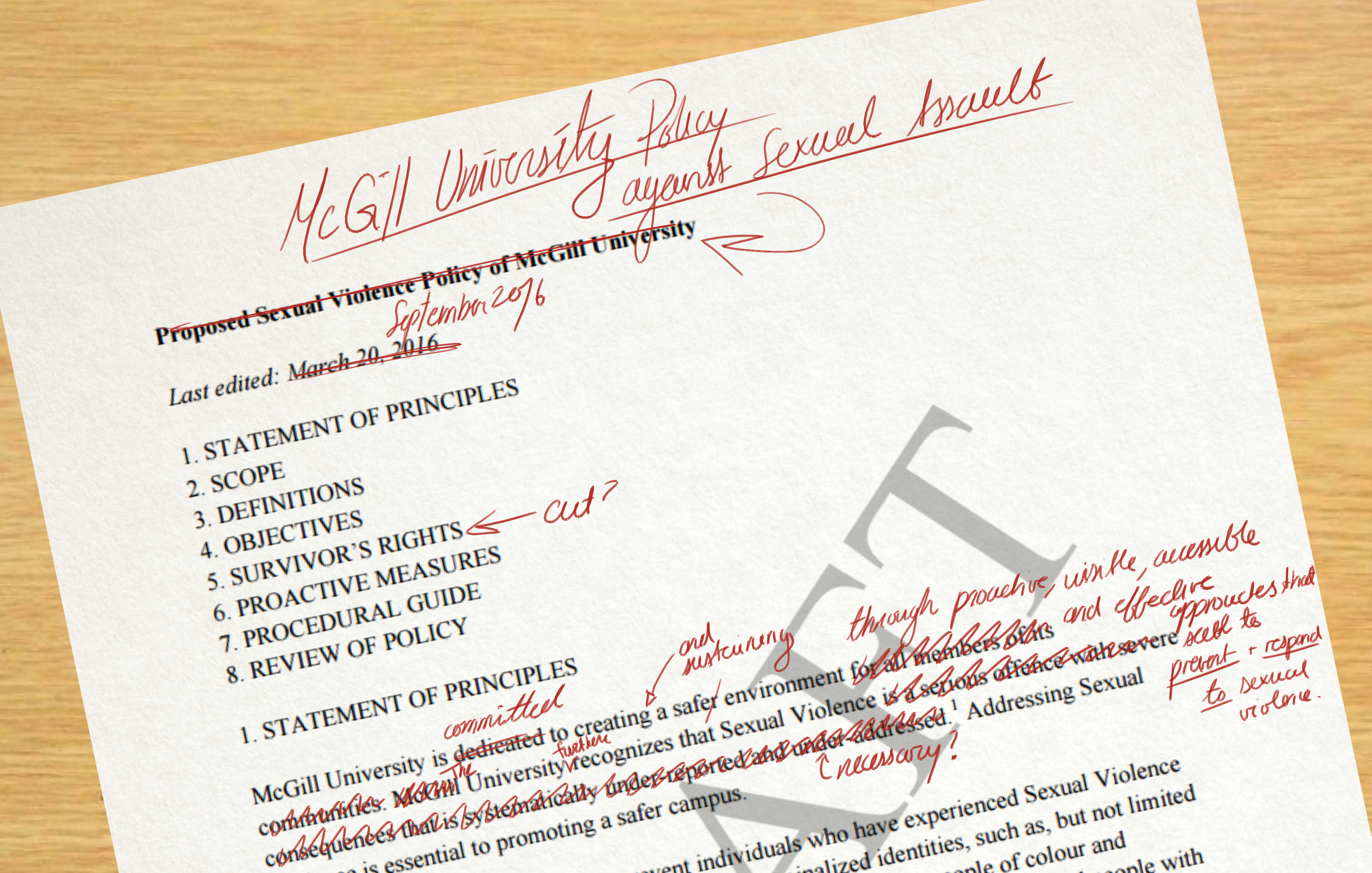 On Monday, September 12, the McGill administration released its Draft Policy against Sexual Violence (DPSV). The draft was written by Associate Provost (Policies, Procedures, and Equity) Angela Campbell following the administration’s sudden withdrawal of support in April for a previous Sexual Assault Policy (SAP). The earlier policy had been drafted by an unpaid, student-led working group over the course of three years.

The “Education and Awareness” subsection specifies initiatives such as on-campus informational campaigns and training sessions for various University bodies (including the University Residences, and Athletics and Recreation services).

The “Responding to Disclosures” subsection, meanwhile, would mandate McGill staff to “inform [survivors] about and provide access to appropriate […] services, including health and counseling services” at McGill and beyond, preserve the survivor’s confidentiality, and “refrain from questions or comments that imply judgment or blame of the survivor.”

The DPSV also features a section on immediate steps that the University can take upon receiving a disclosure or report, as to “protect the Survivor and the University Community,” including “voluntary measures” agreed to by the alleged perpetrator, “implementing alternate academic […] extra-curricular, residential or work arrangements,” or even “temporarily excluding the alleged perpetrator from campus or limiting that person’s role, privileges or duties.”

Finally, the draft policy stipulates that “within four months of this Policy coming into effect, the Provost shall initiate a review of the phenomenon of Sexual Violence at the University,” and that as part of this process, “efforts will be made to engage with” students who have experienced sexual violence, and those with relevant expertise.

“The draft that is currently up for feedback is heavily informed by the efforts of the student-drafted policy.”

It also mandates the creation of “appropriate, visible and accessible physical office space and the appointment of adequate and qualified staffing focused on Sexual Violence case management, education, prevention and support, which accounts for the particular effects of Sexual Violence on members of equity-seeking groups.” This is to be accomplished “through the allocation of appropriate resources.” The nature of “appropriate resources” remains unspecified.

In an email to The Daily, Campbell wrote that “the draft that is currently up for feedback is heavily informed by the efforts of the student-drafted policy [SAP]. It draws heavily from their work, and we know that universities are often led to change through effective, thoughtful student leadership and advocacy.”

She went on to explain that features of the DPSV such as its definition of consent (which includes the specification that “consent may not be free or informed when a person is intoxicated, unconscious, or where the sexual activity has been induced by conduct that constitutes an abuse of trust, power, or authority”) and the aforementioned review of sexual violence at McGill came directly from consultation with students that took place over the summer.

Despite this, the DPSV features notable differences from the rejected working group’s SAP. It is significantly shorter, describes itself as “survivor-focused,” as opposed to “pro-survivor,” and, unlike the SAP, features no specific delineation of survivors’ rights.

Talia Gruber, one of the members of the original student working group that put together the SAP, expressed her frustration about the DPSV in an email to The Daily.

“The goal of our policy was to ensure a clear commitment by the University to create new, accessible, and effective recourse and interim measures for survivors wishing to pursue action against perpetrators, and to ensure the creation of new, more effective, and better funded […] intervention resources, which this Policy simply does not do,” she wrote. “By simply gathering existing modes of recourse, the University is maintaining mechanisms for recourse that are insufficient at best, and retraumatizing at worst.”

In their joint statement on the DPSV, the Students’ Society of McGill University (SSMU) and the Post-Graduate Students’ Society (PGSS) echoed Gruber’s concerns that the administration’s draft doesn’t go far enough to help those who have experienced sexual violence.

“Despite [some] improvements [over the status quo], however,” the statement read, “the current draft reinforces existing University limitations on responding to sexual violence. It does not address formal reporting and disciplinary procedures, relying instead on existing policies such as the Code of Student Conduct that fail to account for the specific challenges of cases on sexual violence. It also does little to guarantee or impose timelines on administrative responses to disclosures and reports beyond these existing policies.”

Several campus groups have also criticised the DPSV for using vague language and shying away from concrete measures. In an email to The Daily, The McGill chapter of Silence Is Violence (SiV) pointed out that, while the policy requires the University to direct survivors to “appropriate University services,” it fails to specify these services.

“What are the services that should be mentioned?” SiV asked. “Do they include free emergency STD testing, free emergency contraception, information regarding abortion services, and contact info for SACOMSS [The Sexual Assault Centre of McGill Students’ Society]?”

“By simply gathering existing modes of recourse, the University is maintaining mechanisms for recourse that are insufficient at best, and retraumatizing at worst.”

SACOMSS echoed these concerns, telling The Daily via email that they “do not see any of the desperately needed concrete changes in the reporting process or mechanisms for recourses within the University.”

Similarly, SiV is concerned about the lack of specification in the provision for “reasonable accommodations and immediate measures” for survivors, asking what form these accommodations could take and how they would be approved.

Gruber also criticized the DPSV’s use of language. “McGill uses equity language,” she wrote, “which the [SAP working group] felt was more watered down and often means historically marginalized groups continue to be excluded.”

While Campbell admitted that “there continues [sic] to be unanswered questions that we will need to address as we look to implementation: including a fulsome training program for staff, resources, and clarity around how this new policy will work alongside current disciplinary policies […] and how it will complement existing campus initiatives,” she did not address the lack of robust forms of recourse for survivors.

Student criticisms of vague language point to a broader concern with the lack of practicality and actionability of the policy. Some groups have even suggested that this vagueness is not mere oversight, but instead a measure that protects McGill from liability if the University fails to adequately support a survivor.

“In keeping the language of the policy vague and omitting certain topics altogether,” wrote SiV, “McGill officials are simultaneously asking survivors of sexual violence to take a giant leap of faith and assume that the University will do the right thing for them when they report, and protecting their own institution in case it falls short of a reasonable response.”

A Culture of Distrust

Student groups also expressed frustration with the administration for the process that led to the DPSV. SiV told The Daily that McGill’s “lack of transparency and shifting levels of commitment” has created a “culture of distrust among members of the McGill community.”

In light of this “culture of distrust” and the policy’s vague language, many remain skeptical that the DPSV’s creators had the best interests of students in mind. “We are concerned,” SACOMSS wrote, “that this policy may just be more empty words from a university that continues to prioritize its public image over supporting the survivors of sexual assault who were promised a supportive and safe learning environment.”

“We are concerned that this policy may just be more empty words from a university that continues to prioritize its public image over supporting the survivors of sexual assault.”

SiV concurred, claiming that the DPSV is simply “a PR stunt designed to polish McGill’s image superficially rather than a tool to ensure that survivors have their rights respected.”

In her email to The Daily, Campbell acknowledged students’ grievances, writing that the administration “regret[s] the sense of legitimate frustration that some students experienced as a result of the time and energy required to bring this matter to Senate. […] We truly want to continue working with and listening to students; their engagement with the process has been invaluable to-date.”

But according to Ian Beattie, a former editor at The Daily and another member of the original working group, this, if anything, represents an understatement. Beattie told The Daily via email that although he feels progress has been made since the group began advocating for a sexual violence policy in 2013, these developments have come about almost exclusively because of students.

“It’s surprised me from the beginning of this process how little urgency administrators have felt about this issue,” he wrote. “Every university in the [United] States, all the other major universities in Canada (and many smaller ones) have policies, and a few even have fairly developed infrastructures to support survivors.”

“At McGill, though, VP after VP, Dean after Dean started their job, presumably at some point became aware that there was no policy on sexual assault at McGill, and not one of them felt the need to do something about it,” Beattie continued. “I think it’s worth emphasizing that this was a student-led initiative – we took it to them, and then had to slog away at it for three years.”

The administration is currently calling for feedback on the DPSV, requesting that community members submit their comments via an online form by September 30.

This feedback will be reviewed by members of the administration in conjunction with the non-profit White Ribbon, an organization which describes itself as a “movement of men and boys working to end violence against women and girls, promote gender equity, healthy relationships and a new vision of masculinity,” and which, according to Campbell, is working against gendered violence on multiple Canadian campuses.

After feedback is considered, explained Campbell, the DPSV will be brought to Senate for information in October, and for approval in November.

Despite their reservations, SSMU and PGSS encouraged students to submit feedback. “The current feedback period is an important opportunity for student participation in efforts to implement pro-survivor, intersectional, and non-directional approaches to addressing sexual violence at McGill,” their joint statement read, adding that they “will be offering closed focus groups in order to gather feedback on the policy draft.”

Other campus groups are doubtful, however, that this public consultation period will lead to any concrete improvements in the policy. “Given that McGill has ignored student input around sexual violence in the past,” SiV wrote, “we are skeptical that public consultations will lead to major changes in the policy. Nevertheless, we plan to be involved at every stage of the public process.”

According to SiV, in order to eliminate McGill’s pervasive “culture of distrust,” “survivors need to be put at the centre of this process,” and the public consultation is the perfect place to start. “No online submission can adequately convey the unique needs of survivors better than face-to-face meetings with them as a major stakeholder.”

“I think it’s worth emphasizing that this was a student-led initiative – we took  it to them, and then had to slog away at it for three years.

Beattie stressed that beyond consulting students on the DPSV in the weeks and months to come, McGill must also address its problematic past.

“The fact that there has been no infrastructure for support up till [sic] now means that for decades people have been experiencing sexual assault at McGill without receiving any institutional support from the University,” he told The Daily in his email. “That’s a legacy which the University hasn’t begun to deal with. If in the next few months the University really seeks out and shapes this policy around those people’s feedback, though, that would be a good start.”

A previous version of this article stated that the Draft Policy against Sexual Violence was written by an ad hoc Senate committee over the summer. In fact, it was written by Associate Provost (Policies, Procedures, and Equity) Angela Campbell. The Daily regrets the error.