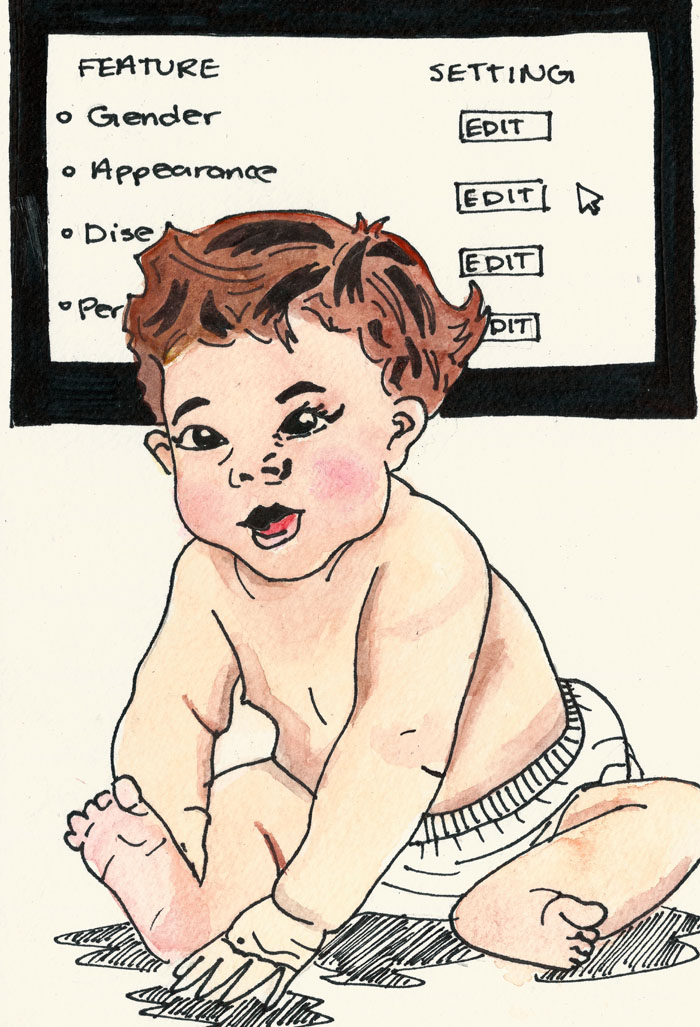 It won’t be long before the term ‘clustered regularly interspaced short palindromic repeats’ (CRISPR) will become a household term. This revolutionary yet incredibly controversial technology may significantly change the way our genes are expressed. However, strenuous debates over safety and ethical matters have to be settled to allow the advent of therapeutic or ‘cosmetic’ gene editing. But first, let us discuss what CRISPR is and why researchers are making such a big deal out of it.

CRISPR are segments of genetic material that are used as a guide to search for repeats of that identical piece of genes in cells. Once located, CRISPR associated proteins (Cas) will then act like a pair of scissors to cut out that piece of the gene; Cas are also known as endonuclease enzymes. Put simply, the CRISPR/Cas9 system can locate a piece of genetic material inside a cell – or, hypothetically, a body – with a high level of precision and cut that piece out, thus altering the DNA and the fate of new proteins. For example, cutting out a gene could cure a genetically inherited illnesses, such as the HTT gene associated with Huntington’s. A baby whose entire family is brown eyed could be “edited” to have blue eyes, by inserting the gene that produces the proteins needed to affect eye colour.

The idea of changing the expression of genes has been thrown around for a long time, but with the fairly recent advent of CRISPR/Cas9 technology it is now closer to reality. Very recently, scientists primarily at the Genome Institute of Singapore and other affiliations have researched a new method for gene editing utilizing the Cas9 protein, whose activity can be chemically modified. This Cas variant, called iCas (a newly described protein), has nuclease activity that is tightly controlled by a drug called 4-hydroxytamoxifen (4-HT). Tamoxifen has also been used in the fight against breast cancer. Fusing the original Cas9 enzyme with a section of the estrogen receptor where hormones typically bind makes iCas sensitive to 4-HT. When 4-HT is added, along with the guide CRISPR segment of genetic material and the iCas protein, the gene-editing method now has an on-off switch that is reversible, easy to implement and time efficient (when compared to other methods of controlling genome-editing). “We benchmarked iCas against other chemical-inducible methods and found that it had the fastest on rate and that its activity could be toggled on and off repeatedly,” published in a September issue of Nature Chemical Biology this year. The authors of this article go on to say, “Collectively, these results highlight the utility of iCas for rapid and reversible control of genome-editing function.”

Now that the CRISPR/iCas system can be tightly controlled by 4-HT, this technology is one step closer to being used for “fast, reversible, chemical-inducible genome engineering in mammalian cells”. This technology may seem like a miracle cure, but many issues such as safety and ethical concerns have yet to be resolved before this system can even be tested in humans, let alone enter the market as a viable therapeutic. There is already significant controversy surrounding this technology, most stemming from fears of dangerous side effects, and unethical motives.
In March 2015, these fears came true when news broke of scientists administering CRISPR/Cas9 in non-viable human embryos in an attempt to cure a fatal blood disorder caused by the gene – thalassaemia. They hypothesized that if successful, this procedure could eradicate this genetic disease before the child was even born. Interestingly, the authors originally submitted their findings to the very prestigious scientific journals Science and Nature, but were rejected partly due to ethical concerns.

The idea of changing the expression of genes has been thrown around for a long time, but with the fairly recent advent of CRISPR/Cas9 technology it is now closer to reality

Following the experiment, only a small fraction of the embryos tested had the gene successfully deleted and the side effects were virtually impossible to predict due to the complicated nature of embryo development. It is uncertain whether the embryos could have carried out normal development, or whether they would have suffered fatal mutations due to the imprecise editing. This may also unethical because any genetic changes administered in embryos, known as germline modifications, are heritable. These changes could have unpredictable and potentially dangerous effects on future generations, and some argue it is unfair to decide the designer genetic changes we want for our unborn children.

Many have expressed concerns that any gene-editing research on human embryos, even if they are not viable, could lead to increasing accounts of unsafe or unethical uses of the technique. It is generally assumed by some that germline editing carries a certain level of unsafety, as it affects every cell within the body, including the sperm or egg cells, and the actual side effects would not be known, and would in essence be irreversible. In the previously mentioned example of the paper published in March 2015, some scientists critiquing the paper have argued that even though the procedure worked there were many off-target mutations, which could of course lead to unforeseen circumstances, such as the silencing of typically important genes.

Since gene editing can give rise to undesirable side effects, these changes may then become embedded in the germline, and the procedure may do more harm than good. The romanticized ideas of curing diseases from blood disorders to cancer to HIV/AIDs with a procedure as simple as hitting copy and paste on a keyboard is too premature and frankly, a little naïve. Extensive amounts of research and ethical debate must be done to ensure the safety of patients. Currently, gene editing procedures in humans is more science fiction than reality. However, the future is bright. The science community has accepted CRISPR/Cas9 as a “miracle” technology and has applied it to a vast variety of experiments to better understand fields such as cell biology and molecular genetics. Even though we can’t cure cancer just yet, CRISPR is still a powerful tool that can be used to understand the way our genes work. Perhaps we will unlock new knowledge that will provide us with the keys to utilize this technology to its full potential. In the meantime, it is important to understand and participate in what could be the most high-profile scientific debate of our generation. The applications of CRISPR/Cas9 are coming, and soon we may be faced with the decision of whether to allow doctors to use this to treat a disease, or change a child’s eyes to blue and a high IQ. Science fiction could soon become reality.