A queer femme of colour looks at The Handmaiden 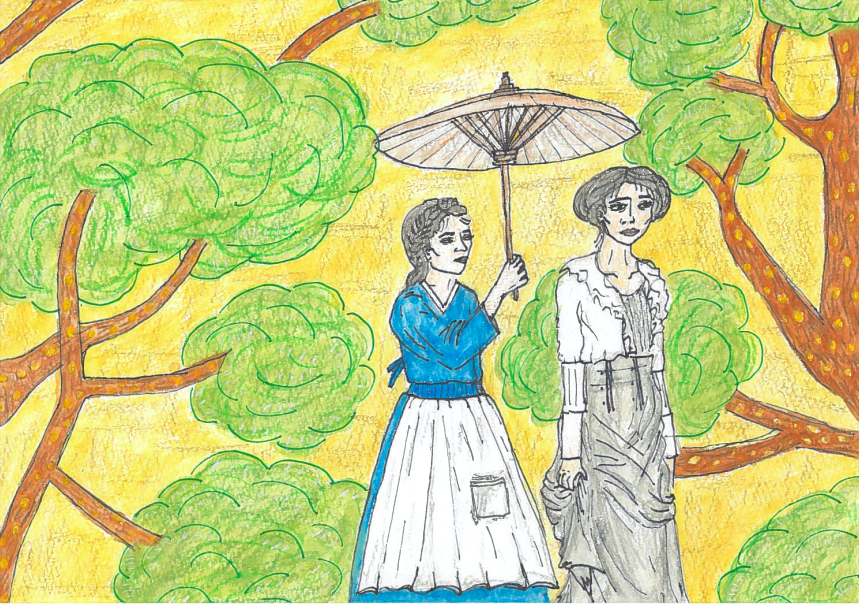 In a scene from Park Chan-wook’s The Handmaiden (2016), the titular maid meets her Lady for the first time. “Damn,” the maid thinks to herself, “she’s got me completely flustered.” I am reminded of all the times I’ve been overwhelmed by the presence of other women and femmes. “Damn,” I would think to myself in those instances, “I’m so gay.”

Inspired by Sarah Waters’s Victorian-era crime novel The Fingersmith, Park’s film is a psychological thriller set in Japanese-occupied Korea in the 1930s. The protagonist, Sook-hee (Kim Tae-ri), is a Korean pickpocket masquerading as the personal maid of Japanese noblewoman, Lady Hideko (Kim Min-hee). She’s on a mission to help Count Fujiwara (Ha Jung-woo), a Korean con man, steal Hideko’s heart and inheritance — but what she does not anticipate is falling for Hideko herself.

The film made its debut at the Cannes Film Festival earlier this year, and was most recently shown at the Toronto International Film Festival. It is expected to be released in Canada by Halloween. Already, many American and Canadian critics have criticized the film for the sex scenes between Sook-hee and Hideko, saying that they were overboard, pornographic, and unnecessary.

I want to see those who have objectified and belittled me fall at my feet and beg to be forgiven.

Two East Asian women are having sex on camera and it looks hot – it must be exploitative, right? Many reviews remark upon the similarities between The Handmaiden and Blue Is the Warmest Colour (2013), which won a Palme d’Or at Cannes and is heralded as a milestone in queer cinema. Considering Blue is a terrible film, I’d argue that it deserved neither the awards nor the praise. It employs some of the most tired tropes for depicting queer people, tells us that our love must always end tragically, and gratuitously includes excessive and voyeuristic sex scenes that even made the actors feel uncomfortable to shoot. It was porn for the straight male director and viewer, with the queer women characters enacting their fetish and fantasy.

I was hesitant to watch The Handmaiden because of the comparisons to Blue. As a racialized queer femme, I am tired of having to choose between invisibility and fetishization in media. I am sick of dying on screen. I am traumatized, and I am vengeful. It’s no longer enough that I see myself survive and make peace with my oppressors. I want to see those who have objectified and belittled me fall at my feet and beg to be forgiven.

In The Handmaiden, the two women protagonists destroy their male abusers. We see Sook-hee and Hideko become closer through conversation and play, their intimacy captured by a single glance, a gesture, a word. Count Fujiwara, the person Sook-hee is supposed to convince Hideko to marry, is entangled in this relationship — not as the common love interest of the two women, but as both obstacle and key to their romance and happiness. It is by manipulating Fujiwara — who deceives Sook-hee and tries to take advantage of Hideko — that the two women are able to escape from their predicament and be together.

A significant portion of the film delves into Hideko’s experiences living with her misogynistic uncle, Kouzuki (Cho Jin-woong), who has groomed Hideko to perform readings of lewd stories in front of other noblemen. Scenes that portray these readings position the men as pathetic, repulsive voyeurs who get off on elegantly staged pornography. The dynamics here are similar to the ways in which, since the Renaissance, male European artists have been exploiting the nude female figure for the appetite of an elite male audience under the pretense of high art.

Apparently, people cannot watch a film about queer women of colour without presuming it to be the antithesis to feminism.

The Handmaiden not only illuminates these relations of power by exposing the male characters as abusive and unethical, but also builds up to a cathartic sequence of Hideko and Sook-hee wrecking Kouzuki’s library. We see Sook-hee tearing up the books — fragments of obscene drawings littering the ground, while a hesitant Hideko shuffles in the background, both unsure of Sook-hee’s defiance and empowered by it — a painfully relatable portrayal, for me, of a person coming to terms with the possibility of surviving abuse. “The one that saves me,” sings the voice-over, as Hideko watches her lover rip up the last book, “my Sook-hee.”

It is the emotional intimacy between Hideko and Sook-hee that makes their sex scenes seem more genuine than spectacular. Park navigated the filming with care and respect, establishing boundaries and negotiating camera angles with the actors before the shoot, vacating the space during filming, and letting the actors rest away from the crew after. These measures alone distinguish The Handmaiden from Blue Is the Warmest Colour, for which the filming of a single sex scene lasted for days on end.

As a result, the performances in these two films convey vastly different senses of intimacy. There is warmth and joy in the way Sook-hee and Hideko each give and receive pleasure, and details such as eye contact, hand-holding, and funny dirty talk demonstrate both earnest happiness and pure physical fun. Unlike Blue, which has its actors fake moaning and shows nothing close to actual enjoyment, The Handmaiden shows, on a basic but crucial level, that its heroines are happy to be together, their passion a result of each other, not a function of an assumed male viewer.

The Handmaiden shows […] that its heroines are happy to be together, their passion a result of each other.

Blue Is the Warmest Colour shows that a film about white women — no matter how predictable the storyline, and how horrendous the working conditions — will get lauded as the most important LGBTQ film of the decade. Meanwhile, The Handmaiden, which shows two women getting justice against the abusive men in their lives, with every effort to ensure the comfort and safety of the actors, gets dismissed as “too male-gazey.” Apparently, people cannot watch a film about queer women of colour without presuming it to be the antithesis to feminism — a mainstream, white feminism that sees non-white cultures as inherently anti-feminist.

As they say, revenge is best served cold, aimed toward your abusers, and fuelled by your love for your girlfriend. The Handmaiden is the seminal queer film we deserve: a phenomenal work that deserves not only more credit by critics and viewers but also analysis not filtered through the white saviour complex.