Check the privilege, not the mic

Conversations about women in hip hop 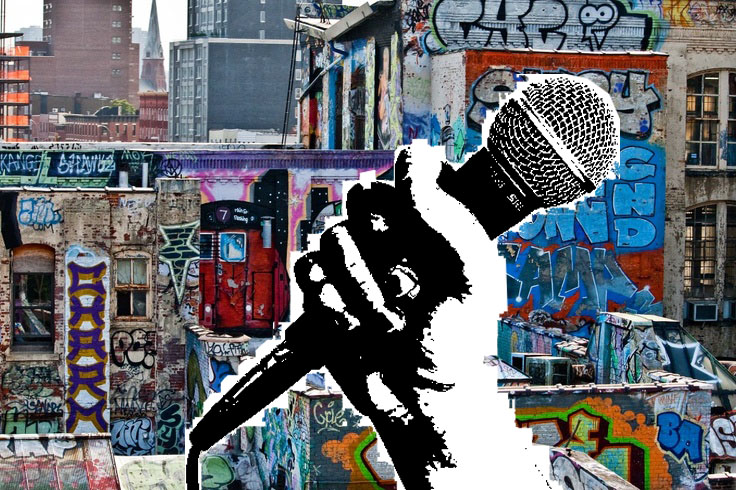 Breakdance. Disc jockeys. Emceeing. Graffiti. These four elements comprise the foundations of hip hop, a culture cum movement and music genre that has its roots in the Civil Rights era, which claimed urban art as its mode of expression. It was embraced by and through the use of public space – from improvised rap battles on the street, to the sonic ‘gasms mixed by DJs at 80s block parties, to the rebellious nature of graffiti on public walls, buildings, and even modes of transportation. Hip hop in its early years was all about vibing with anyone who returned that spirit of acceptance by virtue of being an artistic movement resistant to sociopolitical and racial marginalization.

This message of anti-racism is regularly erased by corporations and artists who are oblivious to the concept of “appropriation” – commonly seen when non-Black pop singers make irritating attempts at rapping in African American Vernacular English or partaking in traditionally Black dance-moves despite being obviously out of character. It’s evident that these people don’t realize or care about the consequences of making a spectacle of marginalized cultures and using people of colour and visible minorities, validating themselves in the act.

[Hip hop] is a movement that tries to [challenge], in beautifully and sometimes painfully human ways of expression, the dominant structures which sustain the status quo.

The issues unearthed whenever an artist appropriates Black culture are beyond a matter of missing credit where due – it’s a dismissal of one of the most pertinent social justice struggle in modern history, as well as hip hop’s role in its modern era. It’s “art” devoid of any artistic element;it extracts capital from harmful and racist representations of African Americans that remain justifications for their continuing oppression.

Among the pushback on these negative portrayals are some of the most eloquent, talented, and passionate works that mainstream hip hop has produced, and thanks to the groundbreaking work of artists like Kendrick Lamar and J. Cole, awareness of hip hop’s politico-racial roots is growing, as well as its transcendence from being a music genre to a movement for racial justice.

Within the movement, however, one issue that deserves attention is the treatment and place of women in hip hop culture. Though misrepresentation, erasure, and exploitation of women is neither inherent nor necessary to hip hop, there is an unmistakable disparity between the portrayal and value of men and women in relation to one another, and this gender gap grows as it continues to be ignored.

Within the movement, however, one issue that deserves attention is the treatment and place of women in hip hop culture.

On June 2, a panel discussion ran by Queens Creation (QC) sought to address the marginalization of women in hip hop, as part of Montreal’s perennial Under Pressure (UP) hip hop festival. QC, which runs a series of events each year for the festival, aims to spotlight the works of women street artists, dancers, singers, poets, writers, and DJs in Montreal’s urban scene. In all its work, QC aims to prioritize inclusion, support, and the sharing of ideas.

The all-women panel discussed the status of women in hip hop culture though the sharing of personal experience, followed by an exposition of artwork by women artists. Each of the five speakers came from a unique background, and were invited for their contributions to the community: Melissa Proietti, founder of QC and integral member of Under Pressure; Wüna Nawü, a self-taught graffiti artist and founder of several street art collectives; Kate Lynx, legendary Montreal B-girl and dance teacher; Shelley Miller, a visual artist whose sugar-based murals have been on urban displays internationally; and Melodrastik, an eclectic DJ.

Nowhere amidst the points on equality, visibility, and allyship provided in the discussion outline was any mention of race, and how women of colour – and especially Black women – fit into the conversation […].

According to Proietti, the goal of the panel was to connect women artists with one another and to reflect on where they see women in the greater space of hip hop culture. The structure was interactive, the panelists and audience comfortable, and the setting relaxed. But a problem was noticeable from the moment the event began, and was confirmed during the discussion: not a single speaker was Black or of colour. Though the panel was meant to be inclusive and offer a place of support for female artists frustrated with inequality, it is difficult to understand how and why the exclusion of Black voices on a panel discussing hip hop could have been possible.

Nowhere amidst the points on equality, visibility, and allyship provided in the discussion outline was any mention of race, and how women of colour – and especially Black women – fit into the conversation, and the lack of representation was only addressed when an audience member posed the question. In response, Proietti provided the only real acknowledgment of QC’s faltering, stating, “any struggles faced by [white] women in hip hop are magnified tenfold for women of colour.” Though her response appropriately criticized the panel’s racial homogeneity, the silence of the other four panelists following her answer was a loud cry proclaiming the long road left to true female empowerment.

Non-Black, and especially white female artists must acknowledge that their membership to the hip hop community requires deep introspection and the realization of the context within which they work.

Despite the lack of input from women who are part of the racial and socioeconomic community to which hip hop is indigenous, the discussion on the struggles faced by women as a whole was interesting and fruitful. There was valuable insight on the nature of status quo trappings, such as the insistent use of “B-boys” as a universal term for dancers, revealing subtle misogyny within a greater system. Panel and audience alike agreed on the issue of constant objectification that creates pressure on a woman’s artistic output to fit criteria which are too often hypersexualizing, in order to earn the approval of more powerful, usually male, figures – and by extension, the community. Artists shared how they found their work held to higher standards than that of their male counterparts, suggesting that “we don’t belong, and we need to prove to everyone that we do”, as B-girl Lynx expressed.

The struggle for gender equality will go nowhere if we do not […] seek to break down the systems of oppression which provided hip hop’s impetus in the first place.

On affecting change, the panel emphasized educating youth, particularly boys, on systems of oppression and how they function, as well as the need to properly address and break down the incorrect but prevailing prejudice that feminism is a movement ‘against men’. The struggle for gender equality will go nowhere if we do not willingly and genuinely seek to break down the systems of oppression which provided hip hop’s impetus in the first place.

Although the well-intentioned panel provided valuable insight and an opportunity to meet with a few interesting and talented local female artists, there was a less encouraging but important message that was expressed by its shortcomings. Non-Black, and especially white female artists must acknowledge that their membership to the hip hop community requires deep introspection and the realization of the context within which they work – though all women in hip hop share an uphill battle, the struggles of all white artists, in relation to those of artists of colour, are experienced from a place of tangible (socioeconomic, among others) advantage because they belong to a privileged race. The failure to acknowledge this, as non-Black but self-proclaimed hip hop artists, strays precariously close to cultural appropriation. Understanding the varying systems of oppression and how they affect members of one industry in extremely different ways are crucial for maintaining collective interests over individual, which is the soulful transcendence in hip hop that so many talk about but few really understand.

The issues unearthed whenever an artist appropriates Black culture are […] a dismissal of one of the most pertinent social justice struggle in modern history […].

Hip hop’s roots are diverse and interconnected. It is a movement that tries to dismantle oppression through challenging, in beautifully and sometimes painfully human ways of expression, the dominant structures which sustain the status quo. QC’s panel was made up of talented artists with genuine intentions of helping to put an end to gender discrimination. Though they failed to acknowledge, let alone address, unique racial and economic complexities of how inequality is experienced in hip hop, this was not a conscious dismissal of that reality on QC’s or UP’s part. It was, however, indicative of how the systems responsible for maintaining discrimination are so deeply imbedded, that even efforts to resist them from members of the community still have a long way to go in terms of education.

Hip hop is, in essence, “by the dispossessed, for the dispossessed,” which means that white female artists who remain silent on the intersectionality of race, gender, and class struggles when addressing hip hop’s misogyny can inadvertently inflict even more harm on women of colour. The real mic check will start with Black women of the community lead the discussion on misogyny in hip hop, in a way reminiscent of the legendary artist Jill Scott’s beautiful delivery:

“I am warm
I am peace
From the roads of Botswana from 23rd Street
From inside the third eye
Ever watching this wicked wicked system of things
I do see.”