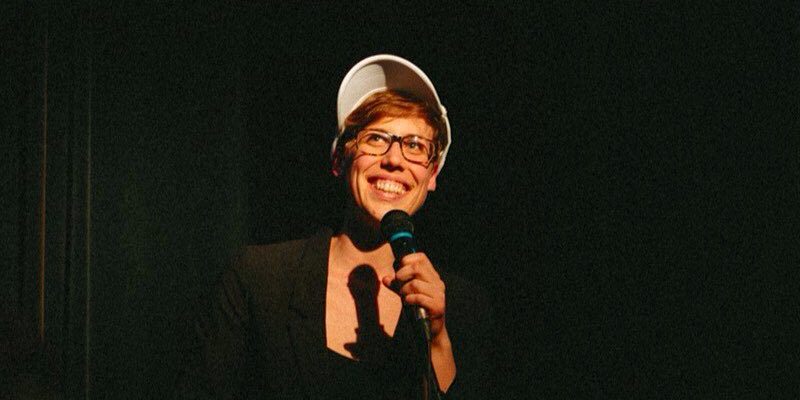 Emma Cooper, co-producer of Rape is Real and Everywhere. It’s a comedy show about rape, as joked by survivors. Photo by Jackie Dives.

On May 30, the comedy show Rape is Real and Everywhere took place at the Medley Simple Malt bar for two hours of rape jokes, which were performed by survivors of sexual assault. In a comedy scene dominated by men, women’s representation is itself a rarity, let alone representation of survivors of sexual violence performing in a feminist environment. The night was emceed by Emma Cooper, the show’s co-producer, and saw three local comics, along with headliner Meg MacKay and Heather Jordan Ross – the other co-producer of the show, perform to a packed bar. Cooper and Ross have been traveling and hosting sold-out shows all across the country.

In a society where violence is a tool of gendered oppression, the ubiquity of rape jokes serves to further silence and take power away from survivors, who are often people with marginalized identities. On stage, Ross expressed frustration toward this reality, “It’s interesting how [people] defend telling rape jokes. They’re always like, ‘if you can tell a murder joke, you can tell a rape joke’,” Ross said. “And I’m like, okay, but I don’t know if one in three men in this audience have been murdered.”

Rape is Real and Everywhere made it clear that when it comes to rape jokes, it matters who tells them and who laughs at them. People cheered loudly when Cooper asked if there were survivors in the audience. The crowd responded compassionately to the stories that the comics shared, humming in agreement and validation when a traumatizing experience was shared. The whole dynamic spoke to the fact that the comics and the audience were not there to mock people’s trauma, but rather to poke fun at rape myths and share their stories in a safe environment.

“How many women do you know who’ve hit the jackpot by claiming they were raped? When was the last time you went on LinkedIn and saw ‘rape survivor’ under someone’s position?”

After each set, Cooper read out personal stories that audience members from the current or previous shows had shared with the producers proving that joking about one’s own experiences of sexual assault with the right audience can be incredibly empowering. The response from the crowd was overwhelmingly supportive. As Ross expressed, “There are a few ways to cope when you’ve been sexually assaulted. You can tell a friend, you can go to a therapist, you can tell the police, or you can put on 20 pounds, drink yourself to sleep […].” For her and the other comics, comedy has become a tool of healing.

More than a therapeutic method, the jokes told throughout the show also packed a revolutionary punch. In a reversal of the power dynamics typically embedded in rape jokes, the comics were able to expose the common assumptions about being a survivor of sexual assault. Robyn Flynn, a Montreal-based comic, took a jab at the popular myth that women lie about their sexual assault for financial gains. “How many women do you know who’ve hit the jackpot by claiming they were raped? When was the last time you went on LinkedIn and saw ‘rape survivor’ under someone’s position?” said Flynn.

“How the fuck is it my fault if this guy goes and rapes somebody else? […] Why is it always our fault to actually do something to prevent it from happening?”

By turning these myths into punchlines, the comics revealed them as ridiculous, false assumptions and exposed their harmful impacts on the lives of real people. As Ross pointed out, there is immense pressure “for victims to come forward after they were sexually abused […] right away, and do it properly […].”

Similarly, Flynn tackled the tendency to shame survivors for not reporting their assaults to authorities, as well as being blamed for their assailants’ future predatory behaviours. “How the fuck is it my fault if this guy goes and rapes somebody else? Did you guys get tired of asking us if our shirts were too short or that we were staying out too late, gotta move on to something new?” asked Flynn in frustration. “Why is it always our fault to actually do something to prevent it from happening?”

Rape is Real and Everywhere made it clear that when it comes to rape jokes, it matters who tells them and who laughs at them.

In a society that normalizes rape and treats certain bodies as disposable and consumable, sexual violence can take a variety of forms, including the complicity of bystanders. Natalie Willett, another local comic, explained that when she was sexually abused as a young girl, a bystander stood a few meters away, watching and smoking. “This was the early 90s […]. If it was more recently, she would’ve been filming and live-streaming it […] as a lot of bystanders are doing nowadays,” Willett said.

She continued, “I was really afraid that other people would come, which is a fucked-up thing, because […] I’d already internalized and figured out that if more people would come by, it wouldn’t have meant help for me. It would’ve meant more participants, or more bystanders.” Willett reminded the crowd that, while everyone could be potentially complicit in sexual violence, bystanders do not have to be – they could be mobilized to provide support for the survivor, as the comedy show itself has done.