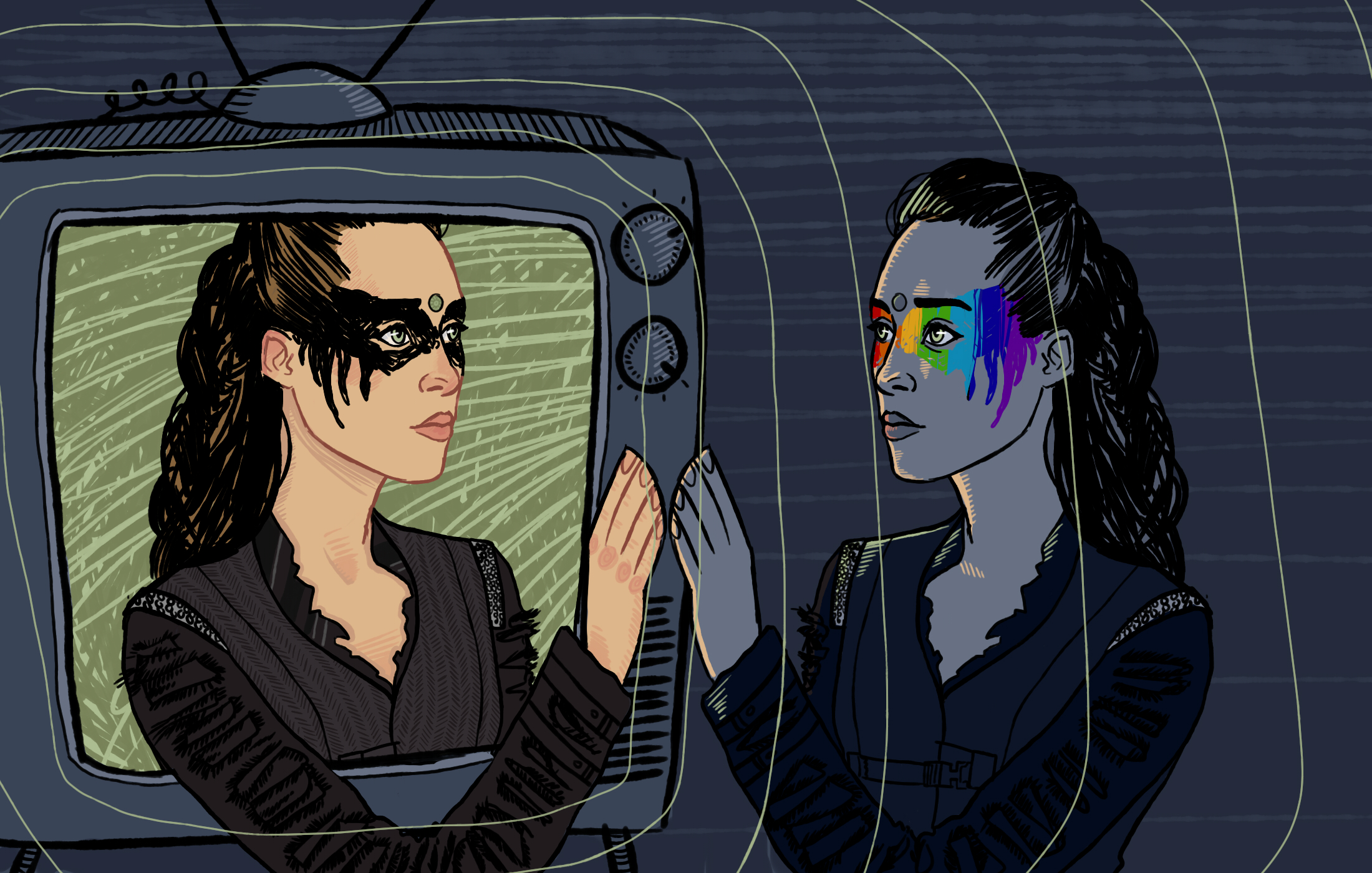 I assume that we’ve all heard about the lesbian character that was killed off via gunshot, right?

No, not Tara Maclay or Delphine. Or Tosha. Or Toshiko. I’m talking about Commander Lexa from The 100.

The 100 takes place 97 years after a nuclear war destroys the Earth and follows 17-year-old Clarke, who lives in a colossal space station named “The Ark,” along with what is left of the human population. The purpose of “The Ark” is to keep the human race alive until Earth is habitable again. Clarke’s engineer father finds an unfixable flaw in the oxygen system of “The Ark”, threatening the lives on board, and thereby the human race overall. He attempts to make this knowledge public to the citizens of “The Ark,” but is caught and executed.

Clarke tries to finish what her father started, but rather is imprisoned, along with a hundred other juvenile delinquents. In a desperate attempt to save humanity, they are sent back to Earth to test its habitability. If they survive, “The Ark”’s citizens can follow suit, and human repopulation can begin.

The kids find Earth habitable, but quickly realize that they are not alone—somehow, humans managed to withstand the radiation and created a community comprised of 12 united clans called the Grounders. The hundred adolescents are immediately forced into war with the community that had survived.

Admittedly, the show is well-made, offering a critical commentary on a theme of land disputes, land ownership, and how far humanity can, or should, go to ensure survival. Clarke winds up being the leader of her people and meets Grounder commander Lexa. The two aim to bring peace between the Grounders and the Sky People and fall in love in the process. After Lexa is forced to betray Clarke to ensure the survival of the Grounders, Clarke sets out for revenge. After a series of plot twists and dramatic events, Lexa regains Clarke’s trust, and the young women finally get the intimate scene that the audience was waiting for. Just moments after, Lexa’s advisor Titus attempts to kill Clarke in disapproval of Lexa’s romantic feelings for the Sky Girl; Lexa ends up killed in the crossfire.

Out of the 35 LBPQ characters that 2016 started with, 15 have been killed off. We are only 5 months into the year and about 43% of the limited LBPQ representation on TV is dead.

So, what’s the big deal? Characters die. Get over it.

The big deal is that Lexa’s death perpetrates “Bury Your Gays,” a wildly homophobic trope in which queer characters never get the same happy endings as straight characters. In the off-chance that a queer character isn’t used for comedic purposes to perpetrate other tropes—for example, the Predatory Lesbian as exemplified in Pitch Perfect—a stereotypical queer best friend who loves shopping and musicals, or a cameo, they often meet their demise through suicide, murder, illness or accident. “Bury Your Gays” appeared in 1930s in Hays Code, an early attempt at film censorship, forbidding anything that promoted what was believed to be unnatural or morally wrong. This allowed for the inclusion of LGBT characters, but with a catch: they had to be punished for their immorality. Acceptable punishments included perpetually sad and dissatisfying outcomes, or being killed off.

Why, after 86 years, are we still misrepresenting a marginalized community in such a violent way?

Even though Lexa’s death has arguably been the last straw for lesbian, bisexual, pansexual, and queer (LBPQ) viewers, this isn’t just about one character in one show. Out of the 181 LBPQ characters in television and film history, 155 have been killed off. Only 29 have had happy endings, if you consider not being killed off a happy ending. Out of the 35 LBPQ characters that 2016 started with, 15 have been killed off. We are only 5 months into the year and about 43% of the limited LBPQ representation on TV is dead.

Jason Rothenberg, executive producer and lead writer of The 100, actively queerbaited the community. He shared pictures of ‘Clexa’—a ship name for Clarke and Lexa—actresses Eliza Taylor and Alycia Debnam-Carey eating rainbow candies, attempting to reaffirm his status as an ally. After Lexa’s death was filmed, writer’s assistant Shawna Benson promised fans on LGBT forums, our safe spaces, that Lexa would not be killed off. Benson stated that if we didn’t believe that the writers loved her as much as we did, then we might want to “seek counselling” for our “trust issues”.

Before the season started, fans noticed that Debnam-Carey was not credited on IMDB in any episodes after “Thirteen” (the episode in which Lexa is killed off) and made public their concerns she would be killed off. Rothenberg shared pictures of Debnam-Carey and Taylor on set of the season’s finale, inviting fans to watch the filming in Vancouver, insinuating that Lexa would indeed be alive and well. As it turns out, Lexa is likely in an afterlife state known in The 100 as the City of Light. We were led to believe that Lexa would not be claimed by “Bury your Gays”, and that the showrunners genuinely cared for the LGBT community.

Rothenberg carried on promoting the seventh episode of The 100’s third season, “Thirteen,” as “game-changing” and urged viewers to watch it live unless they wanted to see big spoilers everywhere online. It isn’t surprising that just days after the original air date of “Thirteen,” which was a big trend online (reaching 1.38 million viewers), The 100 was renewed for another season. Through deceit and careful planning, Rothenberg used his LGBT fans to gain popularity, ratings, and viewers to ensure another year of the show.

Showrunners and filmmakers alike need to understand that the media does not exist in a vacuum, and what is shown in movies impacts life outside the screen. Younger LBPQ girls may not have anything to hold onto except limited representation of LGBT characters.

TV and film crews still don’t seem to get it. Although Rothenberg apologized to fans, his apology is more concerned with expunging “Bury Your Gays” and queerbaiting from his reputation. He tried to assure us that it was never the intention to cause harm to the LGBT community, because in The 100’s universe anyone can die! But anyone can die in the real world, too. The problem lies when anyone can die, yet death has disproportionately high rates for minorities, real world or not.

The thing is, Lexa didn’t even need to be killed off. The story could have very easily continued with her. Rothenberg unfairly blamed Debnam-Carey’s other show Fear the Walking Dead for creating scheduling conflicts. This cannot be proven as we have not seen Debnam-Carey’s contract with Fear the Walking Dead. Regardless of whether or not she could return to The 100, Lexa did not have to be killed off in such homophobic fashion.

Showrunners and filmmakers alike need to understand that the media does not exist in a vacuum, and what is shown in movies impacts life outside the screen. Younger LBPQ girls may not have anything to hold onto except limited representation of LGBT characters. I remember being in grade 8 and ecstatic to discover the existence of bisexual Dr. Remy “Thirteen” Hadley on House M.D., only to find out that she had been diagnosed with Huntington’s Disease, a genetic neurodegenerative disorder that often results in death. Thirteen disappeared, perhaps to find treatment or protect her friends from future heartbreak when she would inevitably succumb to her disease. I was heartbroken. The only character I identified with was gone.

I would like to applaud the teenage LBPQ viewers who are fighting tooth and nail to get mass media to notice the issue, and who are rightfully pursuing the genuine apology that we deserve.

The struggle to understand and accept my sexuality was made harder by media’s refusal to treat LGBT characters with respect. I’m lucky that Lexa’s death came after I learned to love myself and my identity, having moved out of the small homophobic town that kept me in the closet for 17 years. I am privileged to have found a wonderful group of queer friends that support and care for each other. The same is hardly true for many younger, often closeted and isolated, LBPQ girls.

That being said, I would like to applaud the teenage LBPQ viewers who are fighting tooth and nail to get mass media to notice the issue, and who are rightfully pursuing the genuine apology that we deserve. LBPQ viewers may well be the ones to inspire a whole new generation of TV and film, free of harmful tropes. They have inspired multiple trending topics on Twitter every week and raised over $100,000 in Lexa’s name for “The Trevor Project”, a charity organization aimed at suicide prevention for LGBT youth.

Queer teenage girls are adamant about this fight and have already made an impact. Former writer and co-executive producer of The 100, Javier Grillo-Marxuach, has confirmed that he is no longer involved with The 100. He has taken LBPQ grievances seriously, inspiring hope among LBPQ viewers as he will be co-executive producer for the Xena: Warrior Princess reboot. The struggles of LBPQ teenage girls are not trivial. LBPQ girls are a force to be reckoned with.

To TV and filmmakers: bury tropes, not us.

To my fellow LBPQ sisters: As is often said in The 100 by Grounders who have been wronged and are seeking justice or retribution, “jus drein jus daun”.