Organizers seek to disrupt the Canadian narrative of ‘multiculturalism’ 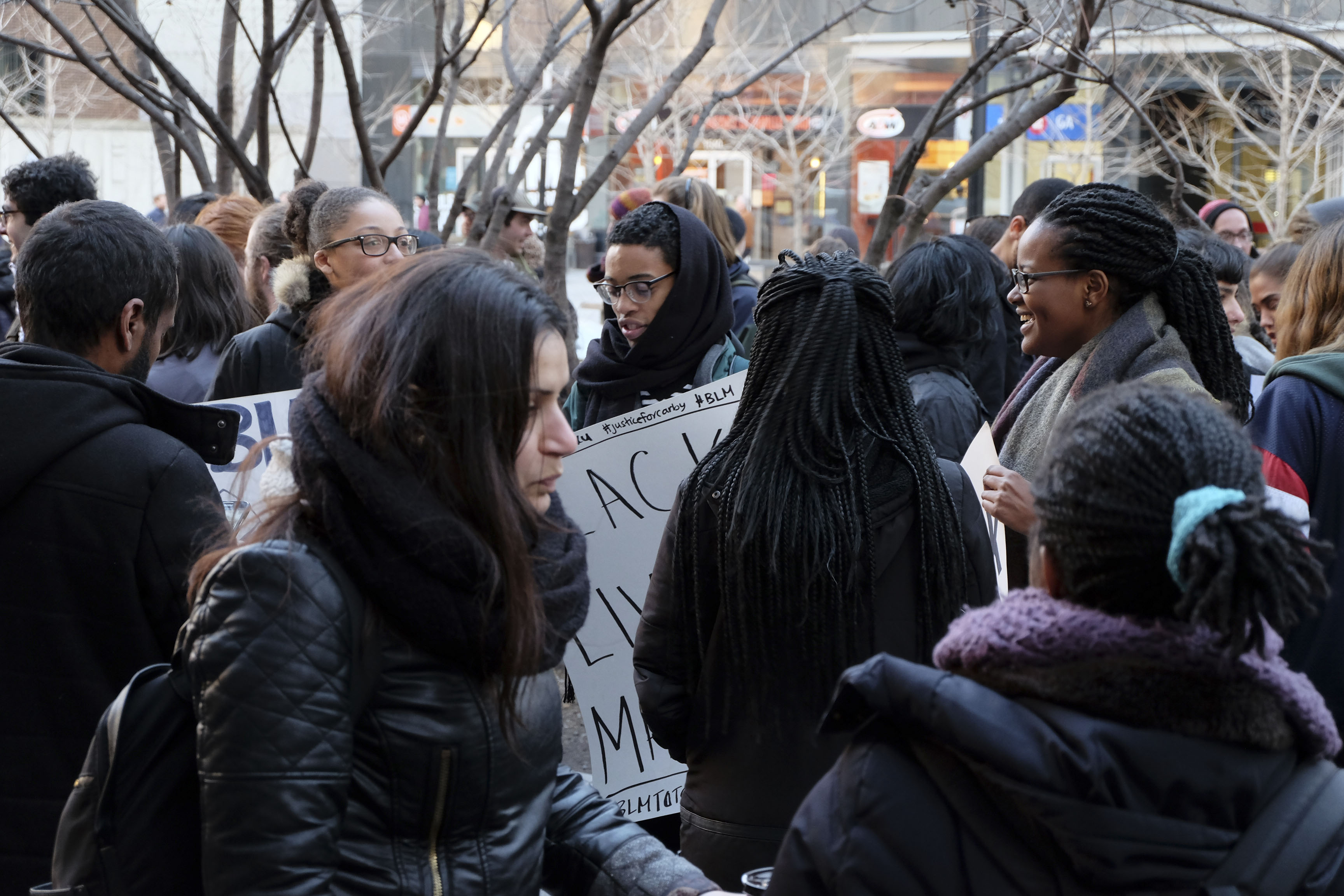 Hundreds gathered at Norman Bethune Square at 6 p.m. on March 29 for two hours to peacefully show support and solidarity with the mobilization efforts of Black Lives Matter Toronto (BLMTO). The demonstration was met with no interference from the Service de police de la Ville de Montréal (SPVM), although multiple police cars were stationed on site.

Recent mobilization in Toronto has come about in response to the acquittal of the Toronto police officer – whose identity has not been released – responsible for the fatal shooting of Andrew Loku, a 45-year-old father of five experiencing a mental health crisis at the time. On July 5 2015, Loku, a South Sudanese man, was holding a hammer when he was shot twice by police in his neighbour’s home.

“Despite it all, Black Lives Matter Toronto has stood strong – centering warmth and community in the face of vicious anti-black racism and police brutality.”

According to BLMTO’s Facebook event, the peaceful occupation of Nathan Phillips Square in Toronto, which began on March 20 and later moved to the Toronto Police Service (TPS) headquarters, has “faced countless attacks from the TPS – ranging from physical attacks, chemical warfare, deprivation of heating and electricity, and various other bullying/intimidation tactics. Despite it all, Black Lives Matter Toronto has stood strong – centering warmth and community in the face of vicious anti-black racism and police brutality.”

“Cops cannot keep killing people with impunity,” continued Ugas. “The other part of why we’re here is to show love and support and solidarity with the people who are out there in those streets, protesting [in Toronto], who have been met with physical violence.”

In the opening speech, before inviting guest speakers to share their thoughts, the organizer stressed that “it is important to remember who is at the heart of the Black Lives Matter movement; this is a movement of black women! Black trans folks, black students, black parents, black disabled folks, poor black folks. These are the bodies that are first to be attacked and last to be supported. We see you and we hear you!”

The Daily spoke with Sidiki, one of the speakers at the demonstration, who called for action from “elites,” specifically students at universities like McGill. Sidiki said that they “have a huge responsibility in having an impact on social justice and social affairs because they are decision makers. People involved in high institutions, whether political or economic, should get involved in trying to promote social justice through laws or endorsement.”

Leslie Anne St. Amour, an Indigenous McGill activist, explained the importance of solidarity and collaboration between Black and Indigenous groups, both of whom have been historically marginalized. “Black and Indigenous people have something in common: We are an inconvenience to the majority. We have felt oppression for years, and now that we demand change, the majority feels threatened. We need to stand strong and stand together,” St. Amour said.

St. Amour continued, “Solidarity means standing behind, and not in front of [others.]”

Editor’s note: This article was modified on 6 September 2017 to remove a quote in accordance with the speaker’s wishes.