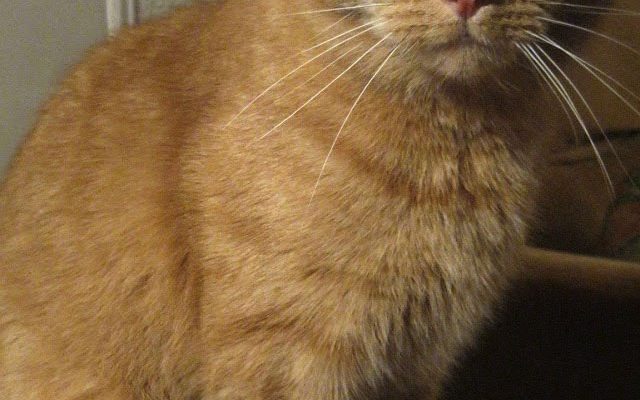 For our feline readers, please find the feline translation of the interview above.

Trashy Spice is an eight-human-year-old cat running for SHMU President. Spice is an orange tabby with a single dark patch, and although this patch is often mistaken for dirt, Spice emphasized to The Weekly that he actually has excellent personal hygiene and always covers his poops after using the litter box. Spice is not a native Quebecer, but was born in Bedford, Nova Scotia. The Weekly sat down for an exclusive interview with the famed feline candidate this week.

The McGall Weekly (MW): Who are you, Trashy? Are you even a student? What do you study?

Trashy Spice (TS): I am really personally offended by questions like this. The implication is that I am not suited, qualified, or eligible to run for SHMU President, which is honestly unacceptable. This would never happen to a human candidate. It’s only because I’m not part of the SHMU clique. Humans, I tell you. Anyway, I am, in fact, a student – I study the squirrels.

MW: How do you feel you size up to last year’s feline presidential candidate, Margaret Scratcher?

TS: It’s really important that cats be represented in student government. I was inspired when Margaret ran last year, with all the work she’s done for cats. Honestly, the idea that cats should be competing with other cats is detrimental to all cats. Stop cat-on-cat hate.

MW: What is the role of politics in SHMU? Would you characterize yourself as a “feline justice warrior?”

TS: I don’t like the term “feline justice warrior.” We should all stand for justice. SHMU has an important opportunity to be doing influential political things, such as furthering the interests of its feline constituents, and SHMU cannot be neutral in this fight. Look at the attacks that I’ve faced – someone asked for my birth certificate. This would not have happened to a human candidate. Someone actually reported my Facebook event, saying Trashy Spice was not a real name. I had to shut down my account. Where is your birth certificate, Mark Zuckerberg? Is that even your real name, “Mark Zuckerberg?” Everyone knows what Spice is – it’s a real word! When has anyone ever Zuckerberged?

More importantly, there were insulting comments made about the size of my paws last week. I guarantee… The size of my paws does not imply anything about the size of anything else. Aside from the paw comment, there has been little discussion of how cute I am. While it’s nice that I am not being judged solely for my appearance, it really is one of my strong suits. I think this lack of recognition is contributing to the subpar number of selfies I’ve been receiving from my supporters on SnapCat.

MW: How do you feel about not being invited to the press debates?

TS: It’s really upsetting. It’s all part of people making weird accusations about me not being eligible. I am a student of life, I spend time at McGall, therefore I am a student at McGall. I am getting some media on my side, which I really appreciate, but it’s going to be an uphill battle. And honestly, the whole way these things are structured just doesn’t take into account my nap schedule. Elections SHMU just doesn’t care about feline needs or feelings. This exclusion has delegitimized my campaign in the eyes of many students – most don’t even ask me about my platform despite the fact that mine is the only one to address all the pillars of the presidential portfolio.

MW: I’ll ask about your platform. You promise more lounging space for those of us who need at least 12 hours of sleep. Are these empty promises? What is your concrete plan?

TS: First, we urgently need to increase the amount of sunbeams in SHMU spaces. We need to fix the windows and change the overall sun placement at McGall. It’s also interesting to note that people have a narrow definition of what a nap space actually is. Really it can be expanded to include any warm, flat surface. I really want to see more creativity in accessing the lounge spaces that already exist on campus – I really don’t understand why the boiler room isn’t open to students 24/7. We have the spaces, students just aren’t allowed there.

MW: Where will you find the money for items in your platform such as breakable objects to knock over and an exclusive sitting cushion?

TS: One of the current referendum questions is for the addition of a mental health fee. This should be used for the provision of breakable objects to channel student stress. That can be a good mental health measure. It’s important for students to get their frustration out. As far as my cushion – ultimately, sacrifices need to be made for great leadership. Me having a prestigious and comfy place to sit is important to my cat body, and should therefore be important to the student body.

MW: What are some other initiatives you’d like to see if elected?

TS: I really like the spirit of samosas at McGall. But I find that it is very exclusionary for those of us who only eat meat. I’m proposing SamoSalmon to bring students together in a kind of scavenger hunt way by randomly placing large Atlantic salmon around campus, the locations of which can be shared in a Facebook group. Also, cats, mice, dogs, and exchange students are not allowed to vote – this needs to change. Finally, I would really like to see improved litterbox maintenance in the Leacock basement.

MW: Wait, are there litterboxes in Leacock?

TS: There are if you’re creative about what a litterbox is, which I am.

MW: Bilingualism is an important issue on campus. Is there a difference between anglophone and francophone cats?

TS: There are indeed several dialects of feline language. However, we are able to understand a universal feline language – Cursing and Taunts (CAT) – so bilingualism is not a major hurdle in our community.

Overall catification at McGall, however, is a major issue. What is catification? Watch a few episodes of My Cat From Hell. The title implies that the problem is in the cat, but it’s generally environmental situations and a lack of extremely comfortable spaces that makes these cats act out. Cats can flourish. But are cats flourishing at McGall right meow? Not to the extent that I would like. I urge my fellow McGallians: catify your mind.

MW: How can students support your campaign?

TS: First, I would like to encourage my supporters to show their support by updating their cover photos, drawing my likeness on their personal possessions, or choreographing an interpretive dance. I’m actually a dancer – I consider most of my movements to be dance.