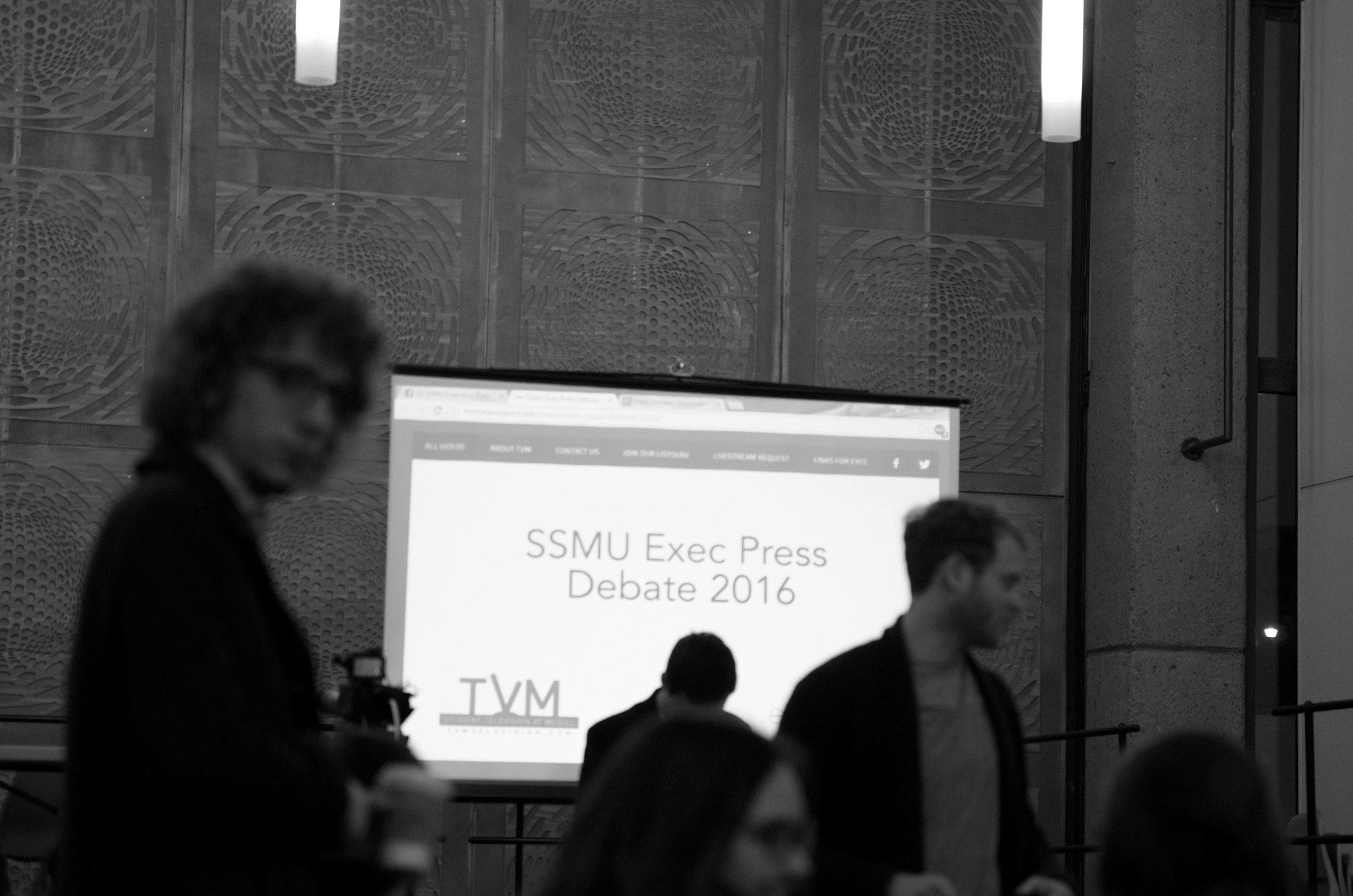 On March 8, candidates for the upcoming Students’ Society of McGill University (SSMU) elections participated in this year’s press debates, held in the SSMU Ballroom. The voting period for the executive elections will begin on March 16 and end on March 18.

The candidates – with the notable exception of VP External candidate Alexei Simakov, who did not attend the debates – were given the opportunity to present their electoral platforms and to answer questions from members of the student press.

U2 Environment student Ben Ger and U1 Biomedical and Life Sciences student Jordan Sinder are competing for the position of SSMU President.

Le Délit asked both candidates where they stood regarding the controversial amendment to the SSMU Constitution which, if passed, would block “external and divisive” motions from being discussed at General Assemblies (GAs).

“I am for direct democracy,” said Ger. “As a student government, we should represent exactly what the student body wants, and the GA is an amazing way for students to come out and mandate their executives to do certain action.”

He continued, however, by asserting that “there is something to say for the idea that the [motions would require a] two-thirds majority [to] stay on the agenda.”

“If it passes,” he concluded, “I will support it.”

Sinder argued that “there is a distinction between de-politicizing SSMU as a whole and making sure our executive council is politically neutral.”

He explained that while his presidency would avoid political stances, he would feel a strong obligation to support activist groups on campus – even those that might bring forward potentially divisive GA motions.
“As a member of the executive council, I think it’s wrong for us to assert certain stances on these divisive issues,” finished Sinder.

U4 International Development Studies student Alexei Simakov and U3 Philosophy and Political Science student David Aird are competing for the VP External position. However, Simakov was not able to attend the debate, and told The Daily that was owed to schoolwork.

Most of Aird’s relevant experience has been with the McGill Against Austerity campaign. When asked by The Daily how he would support other campaigns on campus – such as Divest McGill and Demilitarize McGill – Aird replied, “My involvement with other campaigns is definitely less pronounced than with the anti-austerity campaign. […] I intend to appoint someone who is very knowledgeable [about] those campaigns as Political Campaigns Coordinator.”

Aird continued, “I think these campaigns benefit from having a certain independence from [the VP External] position, from SSMU in general. […] I find [these campaigns] to be more or less self-manageable and self-sustaining at this point. […] I’m open to giving them all the institutional support that they need.”

During his opening remarks, Sobat told the audience, “I want to do a lot more to inform you about [the VP University Affairs’s] role in advocating for your needs at the University level.” He also emphasized his experience in both “project-based” and “administrative portfolio-based” positions.

Responding to a question from The Daily about his opinions on political neutrality and how that would affect the dynamics of next year’s SSMU executive team, Sobat said, “Next year in general will be a restructuring year and there will be a lot of conversations about what SSMU’s priorities are in terms of advocacy as well as service provision, knowing that cuts will have to be made. […] I will say that I do feel that SSMU does have an important role on campus and will advocate for that.”

U3 Strategic Management and Accounting student and SSMU Club Auditor Niall Carolan is running unopposed for the VP Finance position, one of the two positions that have been created out of the former VP Finance and Operations position.

When asked by the Bull & Bear about how exactly he is planning to ensure SSMU’s financial stability given the recent failure of the membership fee increase referendum, Carolan mentioned the Student-Run Cafeteria (SRC) among the items that would need to be reconsidered, should the SRC run a deficit in the long term.

Nevertheless, Carolan said, “I personally wouldn’t feel comfortable saying that I am going to cut this and this at this meeting right now. […] I think that there are specific places that do get cut quickly, like the Club Fund. […] However, I believe that that’s one of the most [significant] things that students benefit from by paying their student fees.”

U3 Biochemistry student Sacha Magder is running for VP Operations, the other half of the former VP Finance and Operations position.

Among Magder’s campaign promises is the addition of a “sleeping space” in the Shatner building. Pointing out the conflict between the number of specialized spaces that SSMU would like to add to the Shatner building and the building’s physical limitations, The Daily asked Magder how he would approach space reallocations.

Magder said, “There are spaces that are available and can be moved. […] I think there are a lot of other ways we can optimize the space and use it better and more efficiently.”

U1 Materials Engineering student Daniel Lawrie is running unopposed for the VP Internal position. His platform centres on communication, organization, and trust.

“I believe that through these values, we’ll be able to fix some of the issues that are currently [affecting] the VP Internal’s portfolio,” Lawrie said.

The Bull & Bear asked Lawrie how exactly he plans to motivate students to be more engaged, apart from just communicating with them. Lawrie emphasized that SSMU needs to go beyond simply using the listserv, and start using mobile platforms such as the MyMartlet app.

“It’s crucial for everyone to have access to information as easily as possible. […] People will be able to get these notifications on their phone. If you look at our generation, we are the millennial generation. […] Everyone’s on their phone 24/7,” Lawrie said.

Elaine Patterson, a U2 English Literature student and Arts Undergraduate Society (AUS) VP Communications, and Dushan Tripp, U3 History student and Clubs & Services Representative to SSMU, are competing for the newly created VP Student Life position, which is replacing the VP Clubs & Services position and taking over the mental health portfolio from the VP University Affairs.

The Daily asked both candidates what they saw the role of VP Student Life within SSMU Legislative Council to be, considering the scope and political nature of topics discussed.
Tripp responded, “As much as I might keep my political opinions to myself, which I probably will, I do believe that SSMU is a democracy and that the voice of the people that vote and debate in SSMU should be [respected].”
Patterson said, “As a SSMU councillor, I would do my best to make sure that my personal opinions did not interfere [with] opinions I received from [those] who are part of certain clubs and services, making sure that what they want to see happens in SSMU Council, even if it’s something I would not like to see happen.”