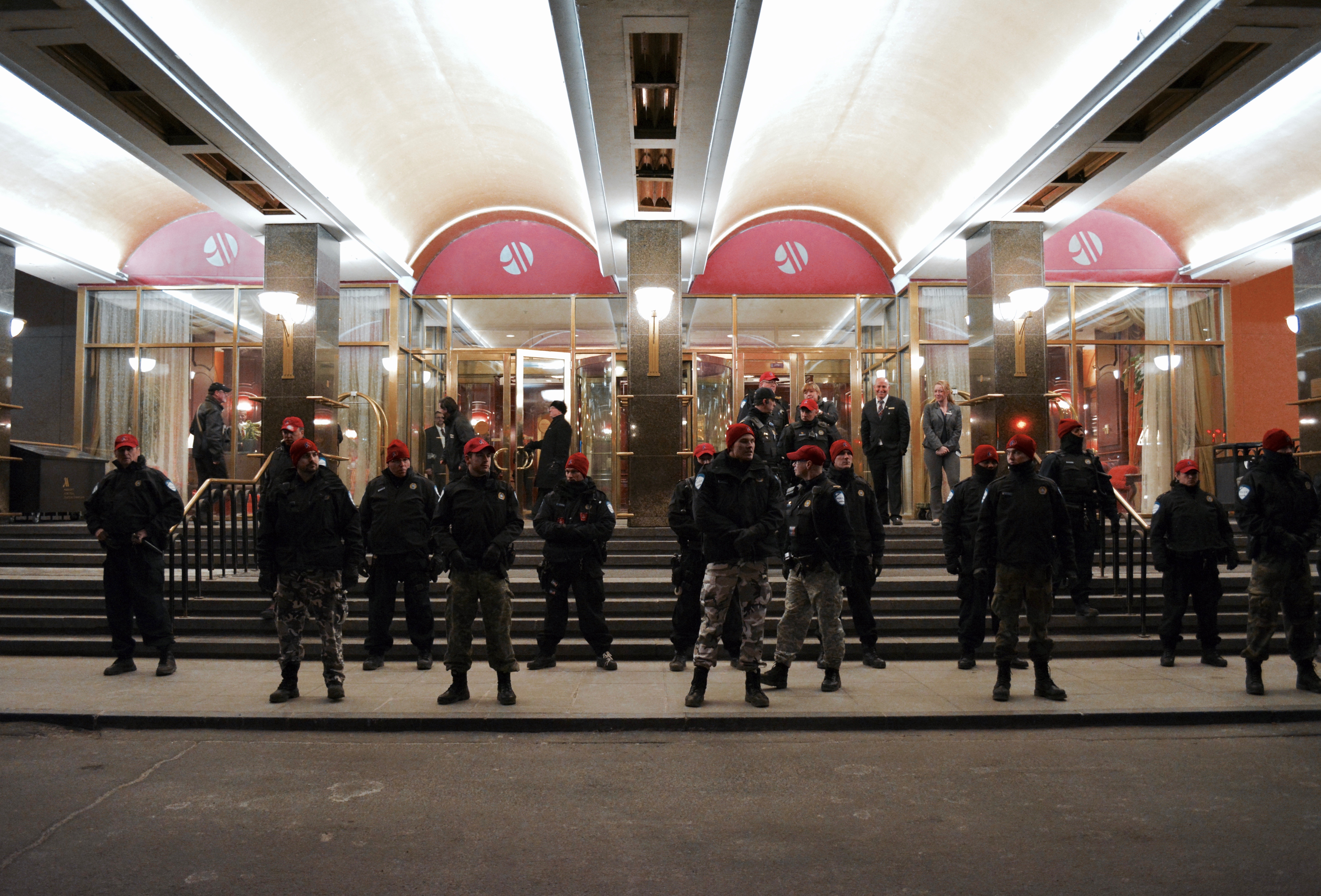 Approximately 100 protesters gathered outside the Marriott Chateau Champlain Hotel on March 21 at 8 p.m. to peacefully demonstrate against the arrival of Marine Le Pen, leader of France’s far-right Front National (FN) party. Le Pen was planning on staying at the hotel and hosting a cocktail reception for supporters there.

There were at least 25 members of the Service de police de la Ville de Montréal (SPVM) outside the hotel preventing their entry. The demonstration came in the wake of a protest in Quebec City on March 20 while Le Pen was touring Quebec and struggling to find members of the Parti Québécois (PQ) willing to meet her.

Protesters carried signs bearing anti-fascist and anti-Nazi imagery, as well as slogans such as “Fascists aren’t welcome in Montreal,” written in both French and English.

Le Pen’s leadership of the FN has been fraught with controversy. In October 2015, Le Pen stood trial for “inciting racial hatred” in France for comparing public prayer by Muslims to the Nazi occupation of France during the second world war. The March 21 protest against her visit ended in at least two arrests, including that of Montreal activist Jaggi Singh.

Le Pen, who is also a member of the European Parliament, arrived on March 19 in Quebec, ostensibly to visit a Bombardier plant as an economic mission from Parliament. However, Le Pen used the opportunity to deliver a series of speeches and interviews in the province criticizing Canada’s immigration policy and multiculturalism.

The Globe and Mail reported that Le Pen described the federal government’s immigration policy as “erroneous,” insisting that “a multicultural society is a society in conflict.”

“We want her to know that her ideals are part of a past that we want no part of.”

After the assault of a protester by Le Pen’s bodyguard in Quebec City on March 20, Montreal-based activists organized a “Welcoming Committee” event on Facebook to “encourage everyone to take a stand against racism, sexism, homophobia, and the worldwide advance of the far right,” and to “let all hotel guests and staff know exactly who is staying in the hotel.”

Kyle, a protester at the demonstration at Le Pen’s hotel, explained to The Daily that “the increasing trend of fascism and right-wing extremism throughout the world […] is not welcome at all in Montreal and Quebec. It should be resisted the world over.”

Kyle added that “the high-ups in the political parties in Quebec have nothing to gain by supporting [Le Pen]. They know that their constituents wouldn’t approve of them meeting this far-right [extremist], and ultimately this is the reason they are rejecting her.”

Shortly after the protest began, the hotel management explained to protesters that Le Pen’s reservation and all FN events had been cancelled. At around 8:45 p.m., protestors learned via social media that Le Pen had moved her interview with Radio-Canada to the basement of the Station des Sports bar on Ste. Catherine, and protesters began to gather outside the bar.

According to Gregoire Beaune, a protester who was present at both demonstrations, a large police presence was already barricading the bar entrance when the group arrived. At least two arrests were made by the SPVM, including Montreal activist Jaggi Singh. According to The Link, Singh was fined $440 for being in violation of a by-law concerning noise and $148 for refusing to cooperate with the police.

Nolwenn Bellec, a French protester at the demonstration in Montreal, told The Daily that they would want Le Pen to know that “nobody here, or anybody with any attachment to France, finds her welcome or desirable. We want her to know that her ideals are part of a past that we want no part of.”