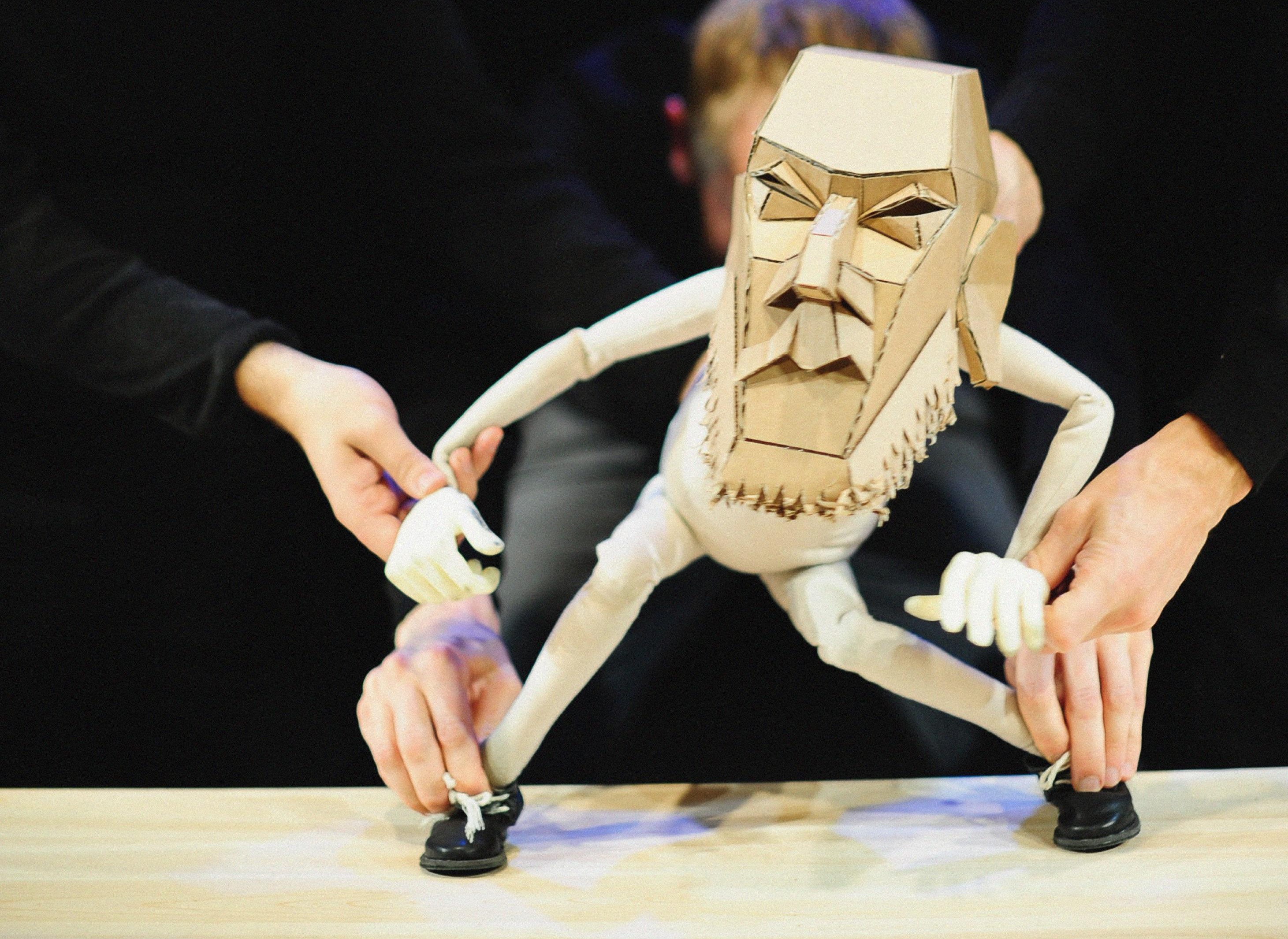 On March 5, an impatient audience filled about three-quarters of the majestic yet cozy Théâtre Outremont venue. At a leisurely pace, three puppeteers and their puppet appeared on stage with a beige wooden table and a translation board as their sole equipment. The three travelling artists, Marc Down, Nick Barnes, and Sean Garratt, each controlled a different part of the puppet’s body in the traditional Japanese style of bunraku. The Table, a self-aware narrative of a puppet’s selfhood woven into a biblical narrative, was part of the 11th annual Festival de Casteliers, which ran from March 2 to 6.

Silence crept in and held the viewers still. Suddenly, a foot tapped on the table. The puppet, with its soft fabric body and cardboard head, came to life, welcoming the crowd in a British accent, a voice given by Down, the show’s director and one of the puppeteers. The evening was introduced as “English humour on a good solid French Canadian table.” Thus began Blind Summit Theatre’s modern rendition of the twelve days preceding the prophet Moses’s death. It occasionally diverged from the traditional storyline when the puppet danced and told tangential stories. Staged in English with French subtitles, the performance centred the puppet’s conversation with the audience, making each of the three evenings unique and only vaguely plotted. The fact that the show relied heavily on the viewers’ reactions to jokes and often direct questions to arbitrary audience members added to the list of impressive puppetry skills and smooth workings of the show.

“Puppets are performers. They only exist when they are performing, when they are being watched. A show is always a dialogue with the audience on some level. In this show, we wanted to confront that with direct address,” Down explained in an email to The Daily.

Weaving dialogue with the audience into the storyline, The Table explored the inner struggles of an artistic puppet whose dream was to “serve a better purpose” on stage by playing meaningful roles, and not solely function as a children’s toy at birthday parties. This is how his ambition of bringing the most climactic scenes of Moses’s story to life on stage came about, as the puppet explained to the audience. In the end, it is not an easy job to use a wooden table to enact Moses’s destiny, wisdom, and elaborate conversations with God.

The puppet’s movements hinted at self-awareness, when he was shyly strolling along the edge of the table, thinking of his next action, and shaking as he teetered at the edges of the table. His desire for self-realization veiled by apparent confidence ultimately defines the idea at the core of the show – the tale of an underappreciated artist pursuing his dreams.

The puppeteers’ skill was most apparent in the scene “The Death of Moses,” where the puppet jumped back and forth between the roles of God, whispering the fate of Israel to a weeping Moses, and the prophet, noting everything down. Intelligent coordination in tune with subtle humour and pop culture references made the scene stand out.

Despite the main storyline being set in the distant past, Down filled the show with pop culture references, making the show feel contemporary and accessible. At one point, the puppet mentioned that most of his Moses acting was based on the Book of Deuteronomy, but was also embellished by pop singer Madonna’s lyrics. The director and cast also included a bit about Montreal’s winter weather conditions. When the puppet was “showing the audience around the table,” he emphasized his favourite corner, where he grew a garden containing his “dead Montreal flowers,” withered by the cold.

Through entertaining and informative acting lessons, the puppet gave the audience an idea of the three tricks the puppeteers used to handle him: “focus” (puppeteers’ constant attention to the puppet’s actions), “fixed point” (maintaining contact with the table), and “breathing” (the puppet’s rhythmic movements). Demonstrating each of those techniques by having the actors let go of one or several of his body parts, the puppet emphasized the importance of a connection between the actors and himself. Garratt temporarily left the stage, at which point the puppet tearfully urged him to come back, since the actor was his “right hand” both literally and figuratively. The scene showcased the team’s brilliant ability to perform on two fronts: speaking for and to the puppet.

The puppet left the stage […] encouraging the audience to stand up for the challenge of self-realization.

The Table was filled with masterful acting, straightforward humour, and hilarious puppet dancing, while also portraying the character of an artist who is self-confident and ambitious, yet very vulnerable and dependent on other people’s praise. The puppet’s movements hinted at self-awareness, when he was shyly strolling along the edge of the table, thinking of his next action, and shaking as he teetered at the edges of the table. His desire for self-realization veiled by apparent confidence ultimately defines the idea at the core of the show – the tale of an underappreciated artist pursuing his dreams.

The puppet left the stage melancholically and self-contemplatively, encouraging the audience to stand up for the challenge of self-realization in the money-driven global media industry and follow their dreams just like he did, performing some “epic biblical puppeting on a table.”