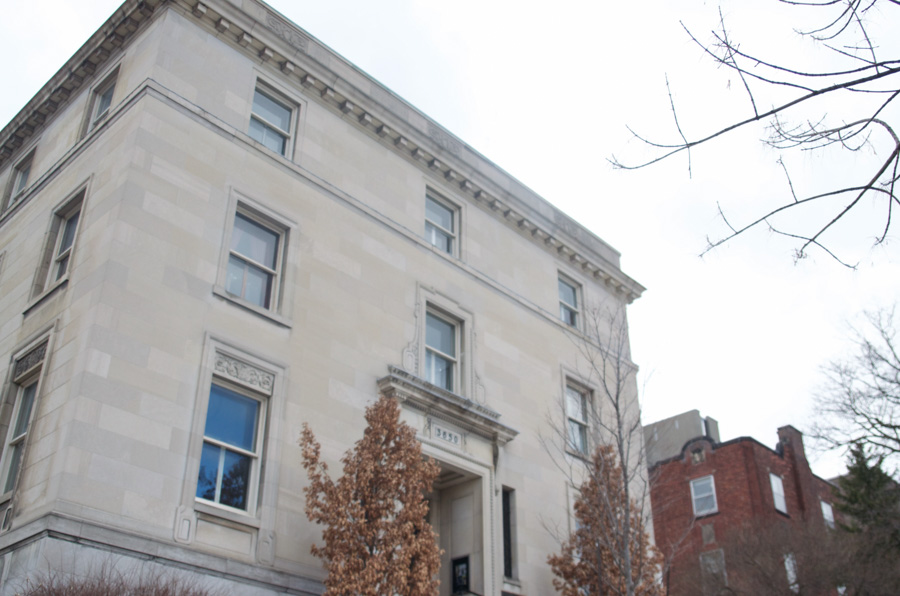 The voting period for the Post-Graduate Students’ Society (PGSS) General Elections has started. Seven candidates are running for six executive positions. In addition, there are two referendum questions regarding fee levies for the World University Service of Canada (WUSC) at McGill and the Legal Information Clinic at McGill (LICM).

The Daily sat down with the executive candidates to discuss their platforms, the high number of unopposed candidates, and the future of PGSS. The voting period runs from March 16 at 9 a.m. until March 25 at 5 p.m..

Of the six executive positions being elected, five have candidates running unopposed.

“It seems there has always been a disconnect between PGSS and its membership,” said Jenny Ann Pura, the Member Services Officer candidate. “Though this year reached an unprecedented low with regards to the number of candidacies, there have been only a few hotly contested elections in PGSS’s recent past.”

“An election where most of the positions are unopposed means that the election has turned into a formality,” said Mina Anadolu, current Internal Affairs Officer who is running unopposed for re-election.

“When they’re not given a choice, the majority of [voters] vote for the candidate because […] they think that a position is better filled than left empty,” said Anadolu.

“So that’s a problem because if someone comes in with very, very radical ideas, […] if they give specific power to only a specific minority of members, if they don’t represent the membership, then PGSS is at risk, because they can do whatever they want with the membership fees that we collect; they can run their own separate agenda,” she continued.

Asked about the reasons for low voter turnout and a lack of candidates, Anadolu said that post-graduate student engagement “hits a low in March” since students are finishing research and writing grant proposals. Nicholas Dunn, the candidate for Academic Affairs Officer, added that “a lot of people work out of different campuses as well,” and rarely spend time in Thomson House.

She told The Daily that she would collaborate with Walksafe and Drivesafe for events, especially to address the problem of students from the MacDonald campus getting home after nighttime events, once shuttles between campuses have stopped running. She would also implement a category system for events, to ensure that one event per semester would be planned under categories such as equity, sustainability, and international student affairs. Finally, Anadolu seeks to offer more workshops regarding securing funding and professional development.

Lavigne was heavily involved in student politics at his previous university, and is a founder of the McGill Additive Manufacturing Students’ Society. Vertika is also a veteran student activist, who initiated a campaign against “ragging” (an extreme form of bullying by senior students toward incoming students) at the University of Delhi during her undergraduate studies.

When asked about the most important part of the role, Lavigne said it was to “represent the views of [the] constituency, and find a middle ground with other student associations.” He emphasized that he has been visiting graduate student offices and labs to speak to students about his platform, but, when asked, admitted that he had spoken mostly to Science students rather than Arts students.

For Vertika, the most important part of her job would be building a coalition within the Quebec student movement. “I want to make sure that students have enough platforms to be informed of what is going on and to actually engage,” she told The Daily.

Furthermore, Vertika argues that PGSS should be more political and wants “to make the political nature of the office visible to students and to encourage them.

“My role is firmly standing against depoliticizing PGSS. Spaces for political expression are clamped down on. I would work with the student body to work against that. If we’re just abstaining on most of the issues, that’s not going to help us,” she said.

Lavigne’s priorities include lobbying the government for increased research funds, as well as creating a PGSS award to recognize extracurricular involvement, which would be funded by industry or the government – he stressed that there is no need to use money from student fees. In addition, Lavigne plans on reaching out to his contacts in the Quartier de l’innovation de Montréal to organize events that could be of relevance to graduate students. 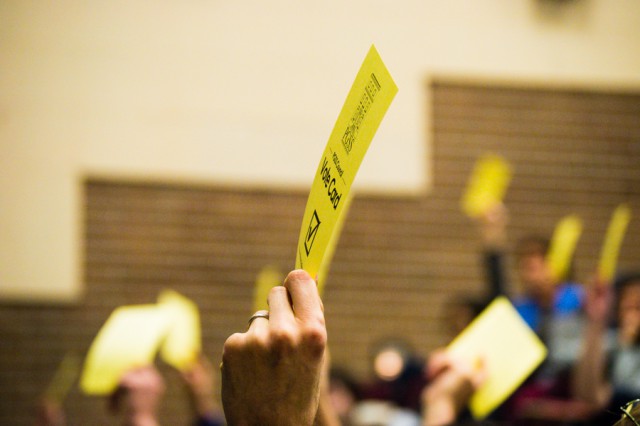 Victor Frankel is a current Environment Commissioner to PGSS and has been the PGSS representative to the Biology Department for several years. He is pursuing a PhD in ecology and evolutionary biology and has been a student at McGill since 2010.

Frankel stresses the importance of serving and engaging the students in PGSS as Secretary General. While he has not sat on the Board of Governors or the Senate, he often goes to these meetings to educate himself and understand the administrative processes involved. “I feel like what I want to do, most importantly, is serve the society, but I also feel like I bring qualities into it that are informed but also proactive in advocacy for students,” he added.

When asked what he will improve on as Secretary General, Frankel emphasized continuing the work of current PGSS Secretary General Danielle Toccalino in engaging students and re-establishing student confidence in PGSS. Consequently, he sees the role as one of ensuring a sense of continuity in existing programs while advancing new initiatives.

Frankel will also work on improving “the processes by which students at various faculties and departments can feel like they’re getting involved,” and ensuring that communications remain as transparent and streamlined as possible.

Regarding the large number of unopposed positions, Frankel pointed to the high level of responsibility and time commitment required. He also said that the “right people” are running for these positions and that students are confident in them.

Nicholas Dunn is a first-year PhD student in philosophy, with little experience in student government.

His priority is to increase the amount of work and study space for graduate students on campus, saying, “It’s kind of shocking how little space there is on campus for grad students to work.”

Dunn believes that the proposed renovation of the Redpath-McLennan library complex, termed Fiat Lux, would create much more student work space. Dunn says he would lobby to have a significant portion of that space dedicated to graduate students, such as rooms for graduate students to hold office hours and group meetings, and lock up personal belongings.

Asked about how he would strive for more funding for graduate students in a climate of austerity, Dunn said he believes there is “not much that can be done,” since the majority of McGill’s budget is “untouchable” and the University’s “hands are tied.” Instead, he said he would explore alternate sources of funding. Dunn also plans on paring down inactive committees, and promoting committees that are more active in their place.

Mina Moradi is a second year student pursuing a Master’s degree in human nutrition and dietetics. Her experience includes being head manager of the Loghman Hakim hospital in Tehran for two years.

In an email to The Daily, Moradi described her plans to resubmit the question to increase the PGSS membership fee to graduate students in Fall 2016, which was brought up earlier this year. “If it passed it would greatly improve the health of our finances and allow us to provide better services to our members,” she explained.

Moradi also noted the tension between preserving PGSS’s essential services and making necessary spending cuts. “I believe that my past work experience gives me the skill to manage this complex situation,” said Moradi.

After a four-year-long court case between PGSS and the Canadian Federation of Students (CFS), PGSS has been left with a significant deficit. However, at last month’s Council meeting, councillors were unable to agree over the severity of the deficit, with some citing $277,779 and others citing $611,000. Asked about which number she agrees with, Moradi said, “I won’t venture to pick a side before looking closely at the numbers myself.”

“It is possible the waters may have been muddied by conflicting views over the years. I believe it would help to look at the situation with a fresh pair of eyes,” she continued. 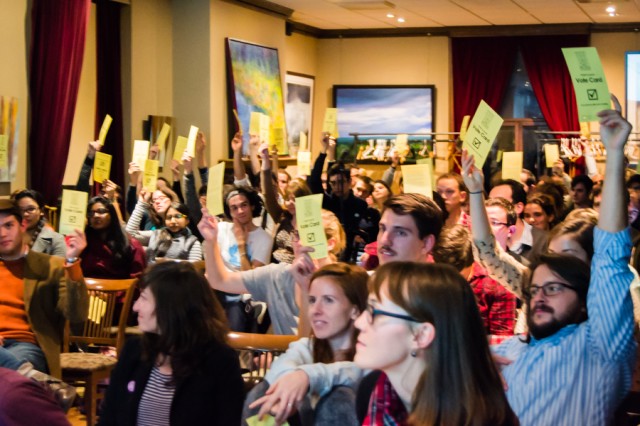 Jenny Ann Pura, a PhD student in experimental surgery, has been involved in PGSS since 2012, when she was VP External of the Experimental Surgery Graduate Student Society and a representative at PGSS council.

In an email to The Daily, Pura explained that “In a time of austerity for universities and deficits for PGSS, the services offered to students are in peril.”

“More than ever, the [Member Services Officer] will have to be strong and creative to protect the budget lines dedicated to services and to make sure the funds are used as efficiently as possible,” she continued. “Student services are not a luxury; they are necessities.”

Asked about her plans for the role, Pura said she would offer professional networking and development opportunities to members, and would work closely with Lavigne, if elected, on his plan to “reach out to his contacts in the [Quartier de l’innovation de Montréal] to set up workshops and information sessions.”

Members of PGSS will be voting on two referendum questions over the next week.

WUSC has brought forth a referendum question to increase the levy from $0.50 to $2.00 per student per semester. This increase would allow WUSC to continue their Student Refugee Program.

“Should the fee pass, we will be sponsoring three students each year for [the] next five years,” said Sujay Neupane, a member of WUSC McGill, in an email to The Daily. “If the fee is not passed, we will be able to sponsor only one student every alternate year as of 2018.”

The sponsored students are funded in their first 12 months in Canada to cover their tuition fees, living expenses, food and a small stipend. “This year, we will welcome Syrian students for the first time,” said Neupane.

The Legal Information Clinic at McGill (LICM)’s student advocacy service is a free, law student-run service providing McGill students and members of the Montreal community with legal information and referrals, as well as document certification.

The fee paid by PGSS students has not been increased since 1990, and Marilyn Venney, senior advocate at LICM, told The Daily in an email that the levy would be used to increase and improve existing services. “For example, we would consider moving the Legal Information Clinic to a bigger space, which would allow us to serve more clients on a faster timeline,” said Venney.

“If the fee levy doesn’t pass, we might be forced to reduce some of the services that Student Advocacy currently provides to grad students,” Venney said.

These include representing graduate students in informal dispute resolution procedures when they face a breakdown in communication with their supervisor, and in accusations of academic offences like plagiarism or cheating, as well as helping them appeal withdrawals.

The Daily’s endorsements for the PGSS referendum questions can be found here.