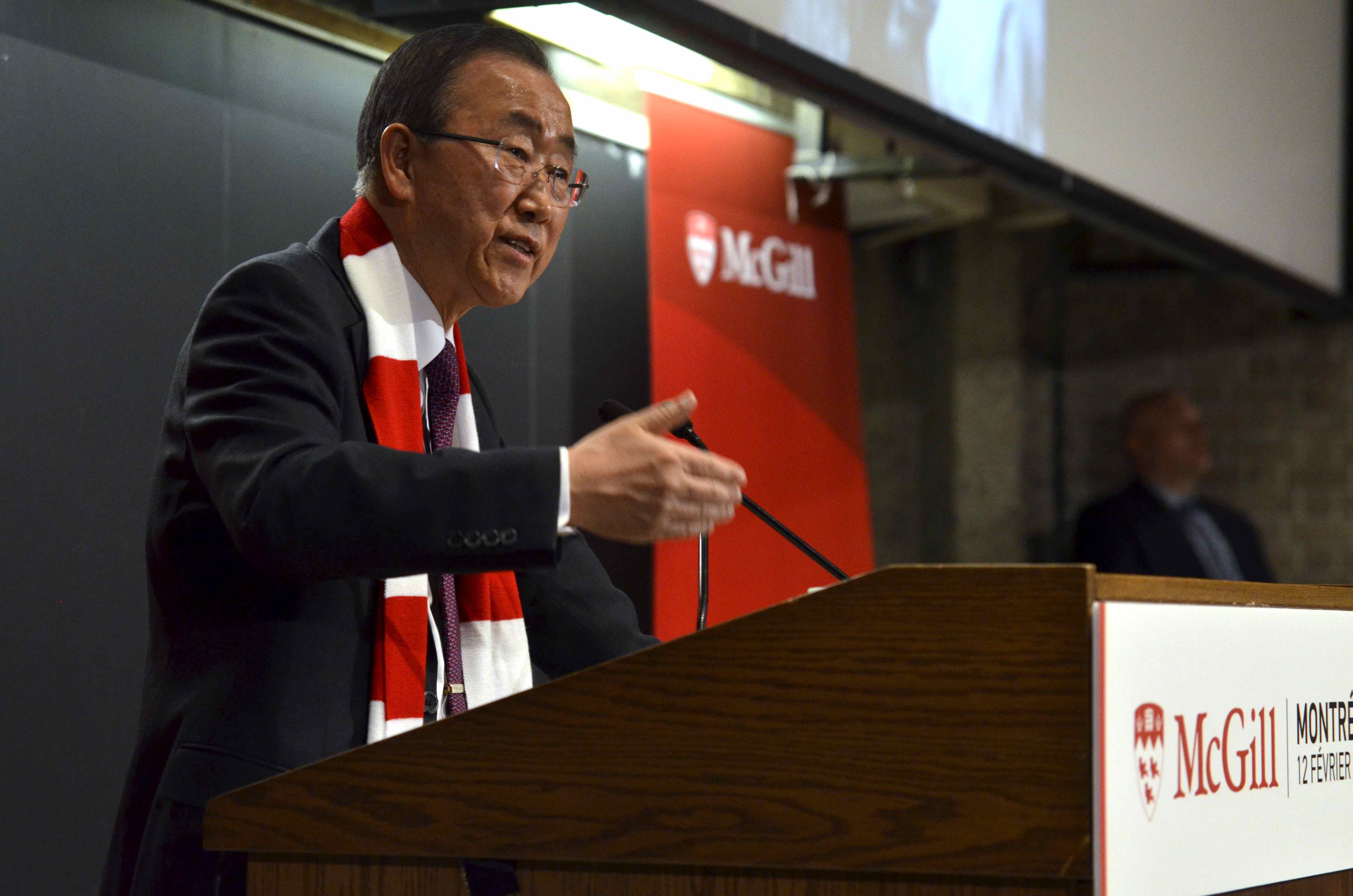 On February 12, the United Nations (UN) Secretary General Ban Ki-moon gave a speech at McGill as part of his three-day working visit to Ottawa and Montreal. Speaking in a packed Leacock room 132, Ban talked about the ways in which youth balance idealism with reality, saying, “Keep your head above the clouds, but keep your two feet firmly on the ground. Then move step by step.”

Hundreds of students had lined up in the lobby of the Leacock building before the speech, forming a queue that stretched both toward the basement and toward the main entrance of the building.
Speaking to The Daily while waiting in line, Law student Nanying Tao said that she thought it would be interesting to hear about globalization from the perspective of an official of the UN.

Members of campus climate justice group Divest McGill were also present, holding a large banner that said “Choose wisely: We can invest in the low carbon economy or we can invest in dirty technologies,” a quote from Ban himself.

Antonina Scheer, a U2 Earth Sciences and Economics student and a member of Divest McGill, was “extremely honoured” to have Ban speak at McGill.

“We know that he’s a supporter, already, of divestment. So, it means a lot that McGill has invited him and we wanted to take the opportunity to remind McGill that he is on our side in this specific debate,” Scheer told The Daily.

Stevan Tempesta Jr., International Relations Students’ Association at McGill (IRSAM) VP Internal, was particularly excited to see Ban. “Being a part of [IRSAM], United Nations and Ban Ki-moon especially have a special place in my heart, I think. […] I anticipate a lot of important dialogue from [Ban] today about youth involvement in politics. […] I think that is especially important, given that we’re all college students […] really trying to engage ourselves early in the international democratic process,” Tempesta told The Daily.

Montreal Mayor Denis Coderre, who attended the event, told The Daily that he was happy to have Ban visit Montreal.

“This is an international city. This is diversity. It’s all part of the process – I call that diplomacy of cities. […Ban] is a friend of Montreal and we will make him an honorary citizen tonight,” Coderre said.

Despite the fact that a fire alarm delayed the opening of the doors, Ban was able to start his speech with no additional hiccups. At 2:40 p.m., Ban took the stage and was met with a standing ovation.

“With all these global threats, we cannot just worry about young people or work for them. We have to invest in youth.”

During his speech, Ban highlighted how important it is for the UN to use youth to “forge solutions” to four problems: “Unemployment, climate change, armed conflict, and humanitarian crises.”

“The older generation has not taken care of the planet that the young people will inherit. You will be continuously affected and influenced by what our generation and our previous generations have neglected,” Ban said. “With all these global threats, we cannot just worry about young people or work for them. We have to invest in youth.”

Particularly with regard to climate change, Ban said, “You can all be part of the transition to a low-carbon economy and a low-carbon future. You are consumers, innovators, and at the same time you have votes. You can invest in green solutions, invent new technologies, and elect leaders who are committed to climate action.”

Hala Fakhroo, U1 Environment and Development student and a member of Divest McGill, told The Daily said she was “very happy” that Ban brought up climate change as one of the global issues that youth should focus on.

“I agreed with what he said, that we need bold action from young leaders to topple over the people […] that don’t believe in climate change and [put] obstacles in our way,” Fakhroo said.

Jed Lenetsky, U1 Environment student and also a member of Divest McGill, agreed with Fakhroo. “I think he said a lot of great things, especially in terms of holding the people who we’ve elected accountable. I think that’s very relevant, in terms of the federal government and especially in the UN, but also to McGill, specifically, in terms of holding the administration accountable for their actions and not taking sustainability as seriously as we would hope.”

“I think that’s very relevant, in terms of the federal government and especially in the UN, but also to McGill, specifically, in terms of holding the administration accountable for their actions and not taking sustainability as seriously as we would hope.”

Maéva Proteau, U3 Political Science and Middle East Studies student and editor-in-chief of the McGill International Review Online, told The Daily, “I feel it’s been so long since [Canada] had a place in the international community, so it’s exciting to see that we are trying to slowly regain our place.”

Daniel Weinstock, James McGill professor in the Faculty of Law, told The Daily that he was surprised that Ban would make a “thinly veiled set of political references” to Canada’s place in international relations under Stephen Harper’s government.

“He went a little bit further than I thought a diplomat […] would go […] to emphasize, as it were, that Canada has gone through a period of time when it had been self-eclipsed, as it were, from the international stage and from international diplomacy.”

Weinstock also said that he thought events like this are important to “remind ourselves of why it is we do what we do, why is it that we chose to study and to teach the range of topics that we chose to teach and study.”

“It’s a good kick in the pants, as it were, to the extent that in the middle of February, we may be tempted by fatigue. […] It’s a good way of reminding ourselves of that once in a while. He was certainly very inspiring, very human, very humane, surprisingly funny.”