Referendum question on creating $2.75 Club Fund fee to be asked 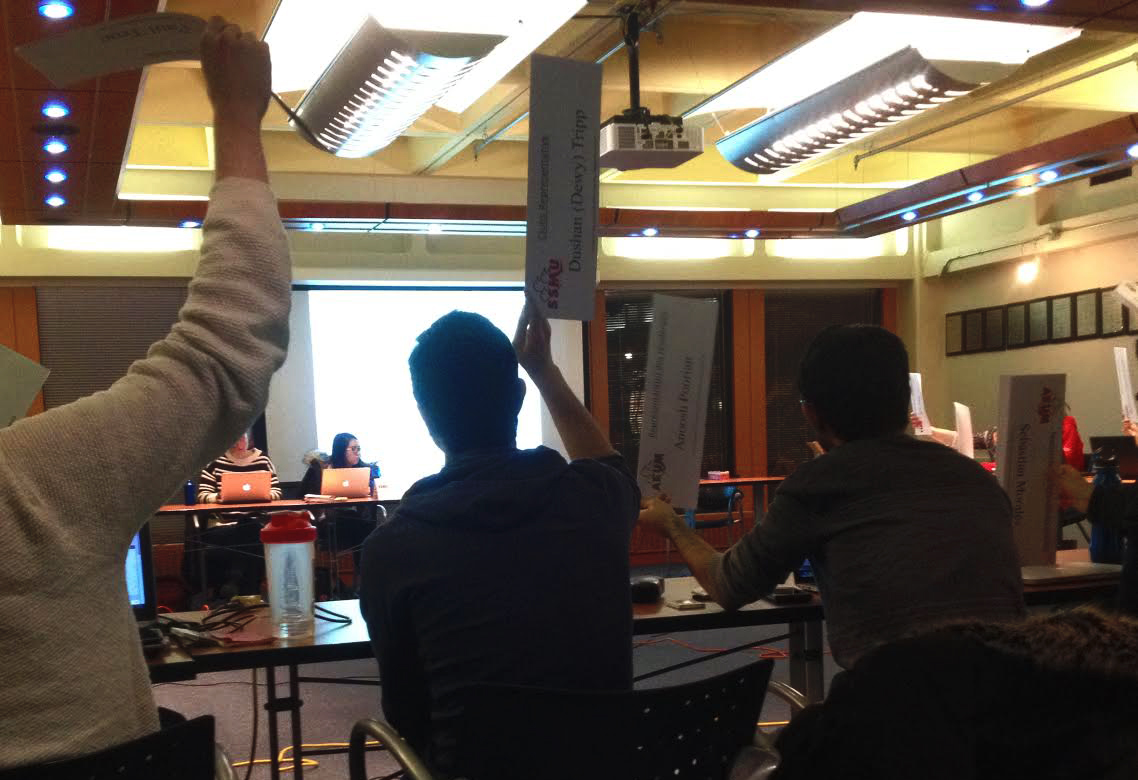 On February 11, the Students’ Society of McGill University (SSMU) Legislative Council met to discuss ten motions and two notices of motion. The motion regarding constitutional amendments was struck and tabled for the next Council meeting.

During its last meeting on January 28, Council had discussed the potential of joining one of two Quebec student federations, the Association pour la voix étudiante au Québec (AVEQ) or the Union étudiante du Québec (UEQ). In her report to Council, VP External Emily Boytinck stated that there “appeared to be little interest” in continuing SSMU’s involvement in UEQ.

A motion was brought to Council to vote on whether the question of joining AVEQ should be posed during the Winter 2016 referendum period. Joining AVEQ would result in a non-opt-outable student fee of $3.50 per student per semester.

“What if we were to give this $100,000 per semester to one student federation that ends up failing? How can we tell that to our students?”

Boytinck introduced the motion, saying, “This has been an ongoing process since before my term even started and […] I think that this association can provide a lot of amazing benefits to students.”

Arts and Sciences Representative Matthew Satterthwaite was strongly against the motion, and was mandated by the Bachelor of Arts and Science Integrative Council (BASiC) to vote against this motion. Satterthwaite reported that the BASiC wants SSMU to postpone the affiliation process with AVEQ until the 2016-17 academic year, when AVEQ has had more time to develop its mandate.

Satterthwaite explained that asking students to vote on this question before AVEQ’s mandate is fully developed is “quite frankly a waste of money and a waste of time.”

However, Boytinck responded saying that AVEQ is not in the process of developing its mandate, as it was voted on in May.

Medicine Representative Joshua Chin echoed Satterthwaite’s sentiments in wanting to postpone affiliation to AVEQ and was also mandated to oppose the motion by the Medical Students’ Society (MSS).

Chin further shared his personal concern that AVEQ may end up failing. “What if we were to give this $100,000 per semester to one student federation that ends up failing? How can we tell that to our students?” he said.

Addressing the idea of postponing the question of affiliation, Boytinck said this “is essentially asking other students in Quebec to fund this organization while we make up our mind. To me, I don’t think that that’s fair. I don’t think that’s a good show of solidarity.”

The motion passed with seventeen votes in favour, five opposed, and two abstentions.

According to section 7, part II, article 6.3 of the SSMU Internal Regulations of the Finance and Operations Portfolio, “The Legislative Council shall, in extreme circumstances, reserve the right to reject a proposed Ancillary Fee question outright. The only time this may occur is in the case that the University has misrepresented information about the Fee in question or has not provided sufficient information regarding the Fee in question in a timely manner.”

Boytinck also said, “We should be able to reject ancillary fees from going to referendum.”

Many councillors asked why these fees are being imposed on students, and felt that the University should cover such expenses in their own operating budget. Arts Representative Lexi Michaud questioned why the University imposes ancillary fees on Council, asking, “Where is our tuition going? Why are these fees being asked to go through [Council]? […] I want an explanation of why this is being passed to student fees.”

“We should be able to reject ancillary fees from going to referendum.”

Councillors then adopted a new motion that stipulated the creation of the ancillary fee referendum campaign period between March 21 and April 21, and the actual referendum period from March 28 to April 21.

VP University Affairs Chloe Rourke spoke in favour of the motion, saying, “I think students should be aware of the fact that [ancillary fees] are essentially fees that are in addition to their tuition, going to services and operations that should be covered through the operating budget of [the University].”
The motion regarding the creation of the ancillary fee referendum campaign passed unanimously.

A motion was brought to Council to approve another question to be posed during the Winter 2016 referendum period, regarding the creation of an opt-outable Club Fund fee of $2.75 per student per semester.

Currently, SSMU allocates $25,000 to the Club Fund each semester. However, a preambulatory clause in the motion explain that this is “insufficient to meet the need for funding by the [more than 240] clubs recognized by the SSMU.”

“The Club Fund fee, which was something we had talked about prior to conceptualizing the base fee, would put the Club Fund at what I and [Bialik thought was appropriate].”

At the Council meeting, VP Clubs & Services Kimber Bialik emphasized the need for a Club Fund that cannot be cut during SSMU budget cuts. According to Houston, the Club Fund fee would generate approximately $100,000 for clubs.

Michaud questioned whether the creation of the Clubs Fund fee was a result of the failure of the referendum to increase the SSMU base fee, a portion of which was supposed to go to student groups.

In response, Houston said, “The Club Fund fee, which was something we had talked about prior to conceptualizing the base fee, would put the Club Fund at what I and [Bialik thought was appropriate].”

Arts Senator Erin Sobat, regarding the possibility that students might view a Club Fund fee as disingenuous following the base fee referendum, added that many students did not like that the idea that the increased base fee would contribute to staff salaries, among other things, but that there seemed to be general support for clubs.

This article was updated following proceedings at Council.