Why we’re voting “yes” on the BDS motion 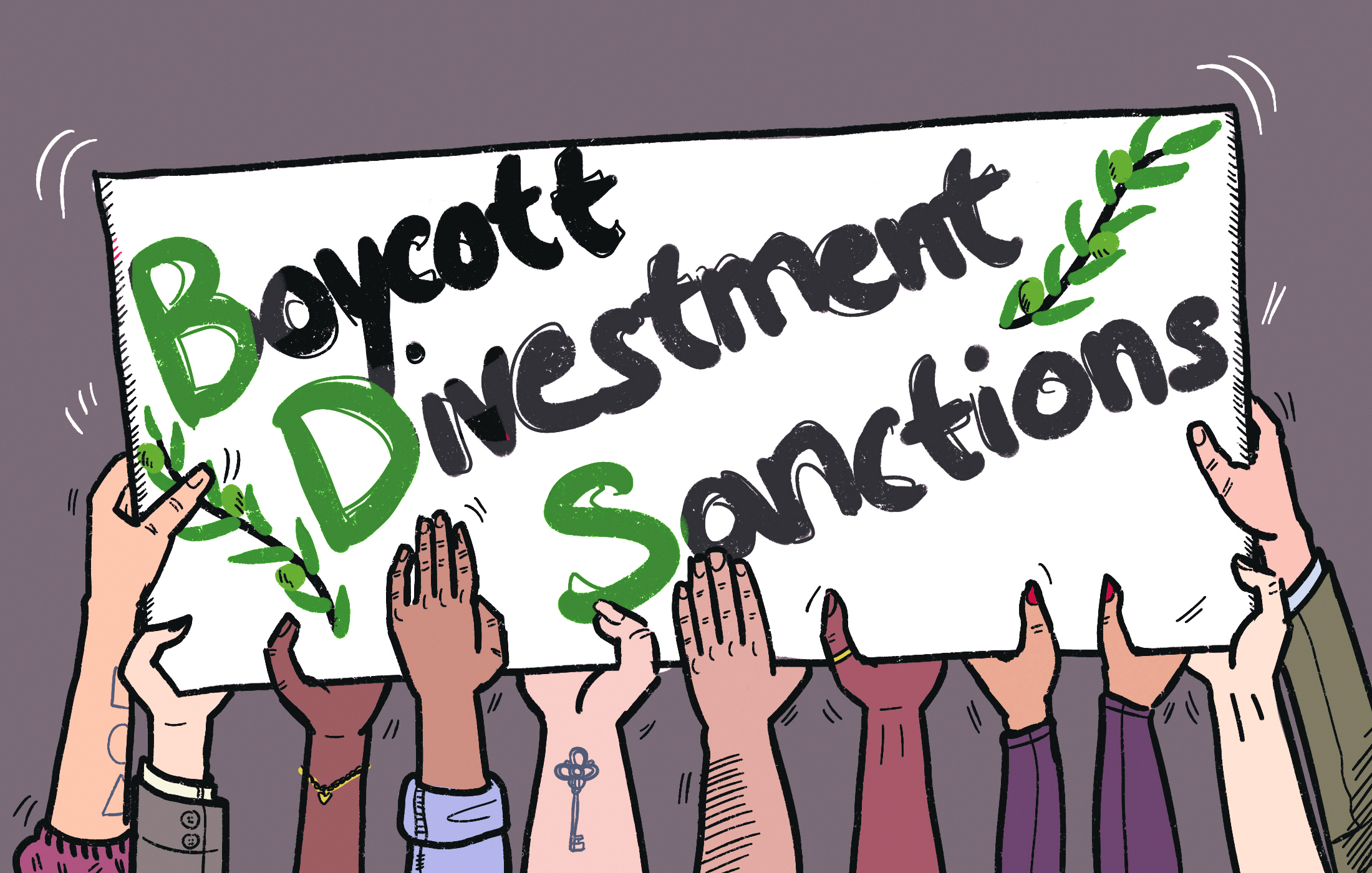 Coming to the realization that being Jewish does not require supporting Israel is cause for both internal and social conflict. At McGill in particular, it can be quite a marginalizing experience. Campus rhetoric consistently pairs anti-Zionism with anti-Semitism, preventing Jewish students from speaking out comfortably against Israel’s state policies for fear of being labelled a “self-hating Jew.” On a campus where the heart of Jewish life is dominated by Hillel, an organization whose vision is one where “every student is inspired to make a commitment to Jewish life, learning and Israel,” and by Chabad, which wants its members to “apply the timeless Jewish principle of Ahavat [the love of] Israel” – not to mention Israel on Campus – it is crucial for Jews to act to break down the hegemony of this discourse at our university.

The representation of Jewish interests on campus is incredibly important, particularly at a university that once used quotas to limit Jewish enrolment. But when the groups who provide resources, funding, and spaces used to support Kosher options on campus or organize celebrations of religious holidays are also those promoting unconditional support for the State of Israel, these groups are acting to silence and alienate Jewish voices who dare to dissent. Similarly, at last year’s Students’ Society of McGill University (SSMU) General Assemblies (GAs), voices claiming to be speaking for all Jews on campus trumped and erased our own, co-opting our identities in defence of the Jewish state.

The discourse on campus has conflated Jews of all backgrounds with a nationalistic, militaristic, and racist government agenda, and as Jewish students who believe in justice, we feel a particular responsibility to speak out in support of the Palestinian people. The Boycott, Divestment and Sanctions (BDS) movement has given us a way to mobilize from a distinctly Jewish perspective in a way that does not contradict our values. In doing so, we are also actively resisting the use of our Jewish identities as a justification for stripping millions of people of their basic rights.

Who are we to speak on the subject? We are Jews – French, Canadian, American, and Israeli; Ashkenazi and Sephardi; Orthodox, Reformist, and secular. We’ve been raised attending Jewish day schools and after-school programs, embracing our identities while coming to terms with the central role that one particular ideology played in our upbringing: Zionism, the support for the existence of a distinctly Jewish state. We aren’t strangers to the Israeli-Palestinian conflict; in fact, many of us are directly affected by it. We have lived and travelled in Israel; we have families in Israel and friends in the Israel Defense Forces (IDF). It is exactly this proximity that makes the conflict all the more important to engage with. Over the past few years, we’ve been working to unpack the conflation of Judaism and Zionism, trying to figure out where in our upbringing Judaism ended and Zionism began. Recently, we started gathering as a group, grappling with our personal identities, learning and unlearning, questioning our roles within the Israeli-Palestinian conflict and as Jewish anti-Zionists on this campus.

We define anti-Zionism as the opposition to the State of Israel as it exists today. We do not aim to speak for all Jews at McGill, nor for all Jewish anti-Zionists; the terms “Zionism” and “anti-Zionism” are both loaded and can be defined in many different ways, and our group members ascribe to various definitions within this range. Irrespective of these identifiers, however, we feel that we must begin to take up space in a campus discourse that has been polarized for too long. It is precisely because of our deep connection to Israel created by the consistent conflation of Judaism and Zionism that we can no longer merely question what we’ve been taught – we must take action.

Fighting for justice is integral to Jewish identity, considering the centuries of persecution and exile that constitute our people’s history. We root our actions in traditions that stem from lineages of Jewish feminist thought – such as that of Judith Plaskow, a religious studies professor at Manhattan College, who writes in Standing Again At Sinai: Judaism from a Feminist Perspective that “the economic, social, and moral costs of military occupation make it incompatible with equity within one’s own boundaries. The rightful claim of Palestinians to a land of their own renders occupation profoundly unjust.” By reclaiming Jewish traditions of resistance, we hope to encourage others to make room for a critical Jewish perspective.

Recognizing these aspects of our identities, we also believe that fighting against ongoing instances of anti-Semitism is important; anti-Semitism is real, both here and abroad. However, resisting anti-Semitism does not contradict resisting the Israeli state. While instances of anti-Semitism within BDS efforts have occurred and must be acknowledged as such, they are not representative of the majority of BDS organizing. The Israeli occupation is justified through the claim that it is necessary to Jewish safety and representative of worldwide Jewry, particularly given the legacy of the Holocaust. These claims obscure and essentialize Judaism, while dispossessing Palestinians of their lands and rights. We reject this idea, and instead stand with those oppressed by the State of Israel.

The BDS movement is not one of our own design; rather, it is answering a direct call on the ground made in 2005 by over 171 Palestinian civil society organizations. BDS puts pressure on companies that profit from the creation of settlements illegal under international law and that design military equipment used in ongoing assaults on the West Bank and Gaza. BDS campaigns are targeted tactics, rather than permanent solutions. On their own, boycotts and divestment will not dismantle Israel’s multi-billion-dollar economy, but these tactics can be used as part of a strategy to pressure a nation to cease engaging in human rights violations, with the end of South African apartheid often being lauded as an example of their successful use. The idea is to urge Israel to lift its discriminatory policies, as well as to encourage the global community to follow suit in opposing state-led violence against an occupied people.

Jewish and Israeli support for BDS can be traced through civic and human rights organizations such as Jewish Voice for Peace, Adalah, and Independent Jewish Voices. Student unions at various academic institutions, including Northwestern University and Stanford, have adopted resolutions to lobby the administrations for divestment. McGill University holds investments in four companies that profit from the occupation either through financing of military systems or the expansion of illegal settlements: these are L-3 Communications, Mizrahi-Tefahot Bank, Bank Leumi, and RE/MAX. Campaigning for McGill to divest its holdings from these sources – less that 0.3 per cent of its total investments – would bring international attention to McGill’s condemnation of human rights violations. Moreover, at the end of the day, it’s our tuition money being invested in these companies, and it is therefore our obligation to speak out.

We believe that it is crucial for Jews and non-Jews alike to be actively engaging with and supporting BDS. It promotes dialogue surrounding complicity in the occupation and allows for a diverse range of voices to participate. Passing a motion at the GA is not an end to involvement, but a strong first step. As such, we ask both Jews and non-Jews alike to come to the SSMU GA on February 22 at 3 p.m. to mandate SSMU to lobby McGill for divestment, in solidarity with the peoples of Palestine.

We are fighting back against the common conflation of Judaism and Zionism because we believe in more than Zionism, we believe in more than the occupation, and we need to break the silence that allows for oppression to be perpetrated. Reaching these conclusions has been a lengthy process for many of us, and many of us did not start out at McGill knowing histories of Israeli violence, but had questions and sought out this community to begin to answer them. If you are a Jew at McGill and you have questions, we invite you to contact us and join us for Shabbat dinner. In the meantime, we hope to see you at the GA.

A previous version of this article incorrectly listed Yesh Din as an Israeli organization that supports BDS. In fact, Yesh Din has no official stance with regard to BDS. The Daily regrets the error.

Nit In Aundzer Nomen (Yiddish for “not in our name”) is a group of Jewish students from McGill that gathers over Shabbat dinners to engage in collective reflection and re-learning. The group takes the form of an informal discussion space or reading circle. The group can be reached at nitinaundzernomen@gmail.com.