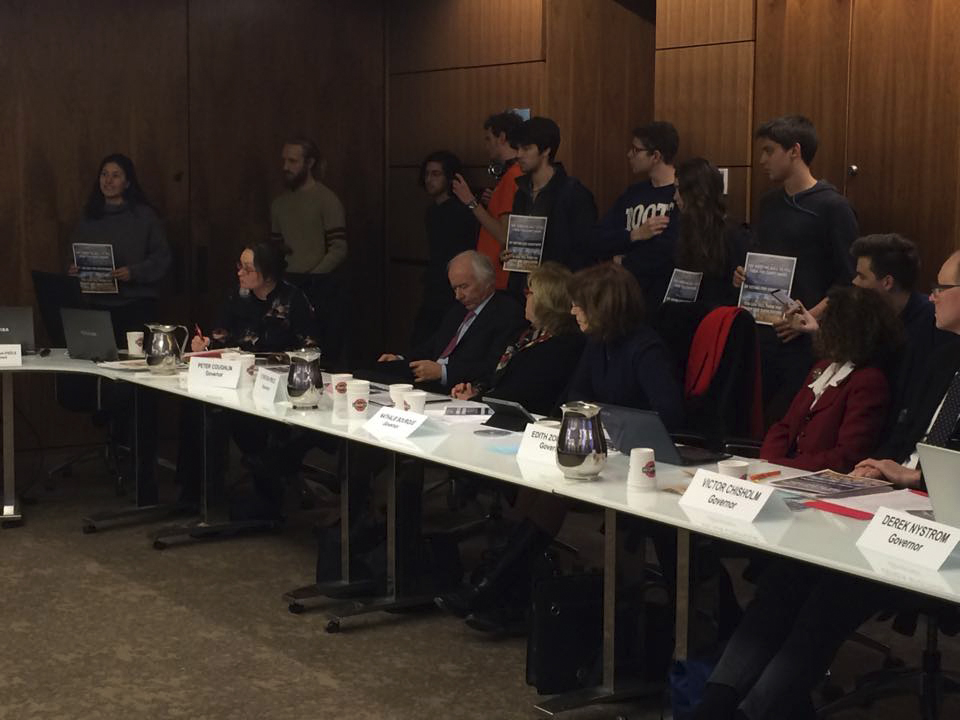 The McGill Board of Governors (BoG) convened for the first time this semester on February 11. Highlights of the agenda included a report from the Committee to Advise on Matters of Social Responsibility (CAMSR), and the annual report from Student Life and Learning.

CAMSR update on divestment from the fossil fuel industry

CAMSR reported on its January 14 meeting regarding the Divest McGill petition calling on McGill to divest from the fossil fuel industry. Stuart “Kip” Cobbett, Chair of the BoG, speaking on behalf of CAMSR, said, “We are now working on our report and we expect to come back to the Board [of Governors] for considerations during the month of March.”

Cobbett also said that the next CAMSR meeting is tentatively scheduled for February 22. In addition, there are currently no plans for any community-wide consultation about CAMSR’s decision, according to Cobbett.

The BoG voted to give the Transcontinental Gas Pipe Line Company, LLC (Transco) a natural gas pipeline permanent servitude and right-of-way, as well as a temporary servitude and right of workspace on two tracts of land on property in Cameron Parish, Louisiana, over which McGill owns an interest. Essentially, this means that McGill has to give away its rights to the land in Lousiana so that Transco can build a natural gas pipeline there. Transco has offered to pay 15,418 USD in compensation, whereas the market value of the property is 11,000 USD.

Post-Graduate Students’ Society (PGSS) representative to the BoG Danielle Toccalino expressed her concerns about the lack of study done about the environmental impacts of the said pipeline.

“The goal of McGill being in the forefront of mitigating climate change and moving to a more carbon-neutral economy should be taken into consideration,” said Toccalino. “I would much rather we give up this [property]. It’s a very small amount of money in the grand scheme of the McGill budget and I think that would set a big precedent.”

“My question is about [McGill’s] reputational risk perspective. The pipeline issue, it has been in the media,” said Tina Hobday, Alumni Association Representative to the BoG. “I don’t know what the chances are that this might get out of proportion that McGill is allowing pipelines.”

“I would much rather we give up this [property]. It’s a very small amount of money in the grand scheme of the McGill budget and I think that would set a big precedent.”

The vote to sell the right to work on the land to the pipeline company passed with only Toccalino, Students’ Society of McGill University (SSMU) President and representative to the BoG Kareem Ibrahim, and Academic Staff Representative Derek Nystrom voting against.

At the meeting, the Human Resources Committee reported that the University and McGill University Non-Academic Certified Association/Public Service Alliance of Canada (MUNACA/PSAC) reached a new collective agreement at a meeting on December 2, 2015 that will be valid for a period of three years from December 1, 2015 to November 30, 2018.

Speaking on behalf of the Human Resources Committee, Cobbett said, “Most of us who have been around the campus for a while will remember three years ago, we had a very bitter strike. It’s wonderful that we’ve been able to conclude this arrangement.”

Toccalino questioned the use of conciliation and arbitration techniques in the ongoing negotiations between the administration and McGill’s floor fellows, unionized under Association of McGill University Support Employees (AMUSE), asking, “Why has […] a mediator been necessary?”

Cobbett explained that he could not go into details about the University’s negotiations “for obvious reasons.” Nevertheless, he explained, “The reason there, I guess, is that thus far we’ve been unable to come to an agreement.”

Toccalino also said that there have been a number of concerns relating to the perceived reasons why McGill suggested using these processes.

“Most of us who have been around the campus for a while will remember three years ago, we had a very bitter strike. It’s wonderful that we’ve been able to conclude this arrangement.”

“I don’t think it’s in anybody’s interest to get into the specifics of any of the negotiations. These negotiations necessarily involve a lot of moving parts. One thing they’d agree to, we won’t agree to. Somebody has to step back and look at the whole thing and we have a team of negotiators to do that,” Cobbett responded.

Report on Student Living and Learning

“[At McGill] the demand [for counselling with respect to mental health] has doubled in two years,” Dyens said. “We are still trying to figure out what the source of the problem is. […We are] trying to give students more tools and more agency so they don’t get to that point [of needing counselling].”

Dyens also mentioned that McGill is working with Queen’s University and the University of Toronto to develop a Canada-wide strategy for addressing students’ mental health.

This article has been updated following the proceedings at the Board of Governors meeting.