Organizations campaigning for “no” vote alleged to have violated SSMU regulations 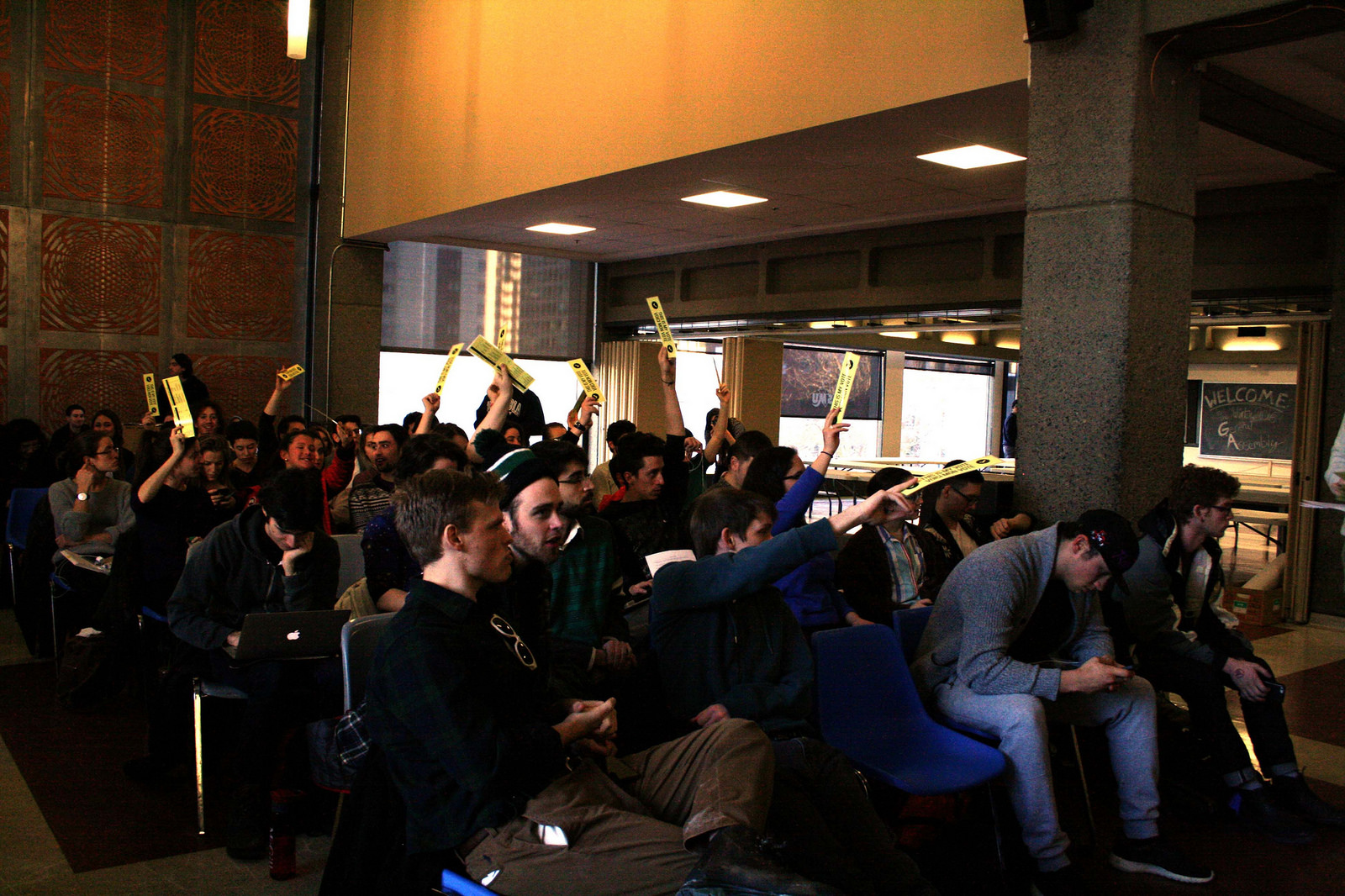 This is a developing story. The article will be updated to reflect any changes that may occur.

The motion regarding support for the Boycott, Divestment and Sanctions (BDS) movement, passed at the Students’ Society of McGill University (SSMU) Winter 2016 General Assembly (GA), has failed the online ratification process, amid allegations of illegal campaigning against the motion during the ratification period.

The results of the online ratification process were announced on February 27. The BDS motion was nullified with 2,819 students (57 per cent) votes against the ratification, 2,119 (43 per cent) votes in favour, and 6.6 per cent out of a total of 5,286 students abstaining. Motions that pass at the GA need to be ratified online before they can be put in effect.

Other motions passed at the GA were ratified, with the motion regarding the procurement of products containing conflict minerals by SSMU and the motion for an increase in Indigenous content at McGill gathering 75.5 per cent and 70.3 per cent of votes in favour respectively.

In a statement published on its Facebook page, the McGill BDS Action Network, also known as McGill BDS, thanked it supporters and declared that “the fight is not over.”

“Though we are disappointed with the outcome of the online ratification process, we are proud of the 2,119 students who stood for the rights of Palestinians.”

Speaking to The Daily, Melis Çağan, an organizer with McGill BDS, said, “Though we are disappointed with the outcome of the online ratification process, we are proud of the 2,119 students who stood for the rights of Palestinians.”

“We take pride in the extensive work that the McGill BDS Action Network has put into this campaign; we have still made history. We passed the BDS motion on the same day as the [House of Commons of the Canadian] Parliament voted to condemn BDS. As history has shown, real change comes from the people and not from governments,” Çağan continued.

In another statement published on February 26, McGill BDS had condemned “active campaigning efforts and tactics used by various students, professors, and student groups in opposition” to the motion. In addition, McGill BDS alleges that “fraudulent Reddit and Instagram accounts have been created with our name and logo.”

According to article 6.4 of the SSMU Internal Regulations of the Presidential Portfolio, “Campaigning is not permitted during the period for online ratification.”

McGill BDS alleges that campus groups opposing the BDS motion have used “exterior organizations, rather than their campus affiliates, to disseminate misinformation regarding the motion’s intent, form, and impact.”

According to evidence shared on McGill BDS’s Facebook page and sent to The Daily, Federation CJA, a Montreal-based Jewish organization, sent an email to its membership during the online ratification period, asking members to “encourage your children, your grandchildren, your friends, indeed any McGill students you may know to make their voices heard by voting ‘NO’ in [the] online ratification against the BDS motion.”

“For the online ratification process to be truly meaningful, we need students to be aware and informed of the issues. It is in that spirit [that] we released our statement.”

The Quebec branch of the Centre for Israel and Jewish Affairs (CIJA) also created a sponsored Facebook post on February 26, with the statement urging students to vote against the BDS motion, in both French and English.

At McGill, the Conservative Association at McGill University released a statement on February 24, asking students to “join us by standing with Israel, and voting no to the BDS motion,” on their Facebook page. The statement was edited roughly two hours after it was published.

When asked to explain why his group published that statement, Conservative Association at McGill University President Alexei Simakov told The Daily, “For the online ratification process to be truly meaningful, we need students to be aware and informed of the issues. It is in that spirit [that] we released our statement.”

The “Vote No McGill” Facebook page has also campaigned for a “no” vote during the voting period for the online ratification, saying, “It takes a few seconds and will help us stop this motion in its tracks.”

McGill BDS stated that it “will be pursuing recourse for the fact that there was illegal campaigning to vote no on the motion.”

“We are proud of our accomplishment despite this uneven playing field.”

Çağan said, “We got 43 per cent of the votes in a race where the opposition was campaigning at full force despite it being illegal to campaign during online ratification, evidence of which we have collected throughout voting period. We are proud of our accomplishment despite this uneven playing field.”

Speaking to The Daily, SSMU President Kareem Ibrahim explained that a petition could be brought to the SSMU Judicial Board (J-Board) regarding these alleged violations of the internal regulations. If the J-Board is convinced that these actions do constitute violations, it could recommend a revote. Ibrahim noted that the J-Board’s recommendations must be ratified by the SSMU Board of Directors, adding however that only in extreme and rare circumstances would recommendations made by the J-Board not be ratified.