The least we can do

Trigger warnings don’t have to be perfect to be valuable 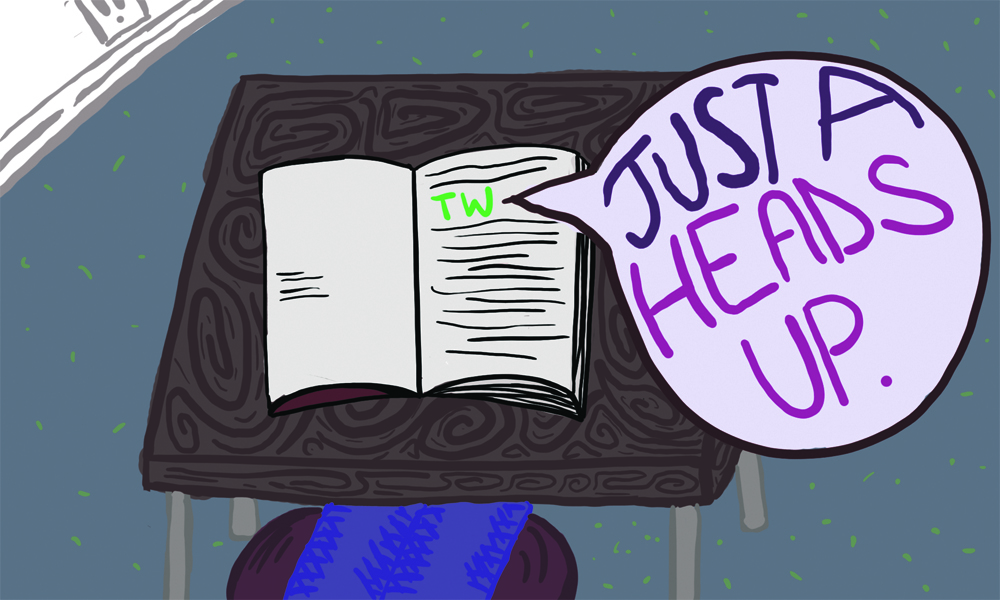 Last October, I attended an event hosted by the bookstore Drawn & Quarterly, featuring writer Roxane Gay. Gay was invited to discuss her recent publications, a novel called Untamed State and her book of essays Bad Feminist, in which one essay is dedicated to the debate on trigger warnings. Gay, like some other feminists have done, notes that there are no clear guidelines for issuing trigger warnings, and that because triggers are so individual and multiple, it would be impossible to issue a warning for every trigger, for every person. This is true, but we must be careful not to conclude that we should stop issuing them altogether, especially in activist spaces.

I’ve had far too many debates about this topic. The more I have this argument, the more it feels like my eyes are permanently stuck to the back of my head. Here’s the thing – why is there a debate about trigger warnings in the first place? If we can do one small thing, one thing that’s not enough but is something, one act of kindness, one act of recognition, of allyship, then it’s clear to me that we should.

When people argue against trigger warnings, they often rely on the worn-out script that the world is a tough place, and we shouldn’t be coddling people. How have we grown so weak in our activism, in our allyship, that we think this is any way an acceptable response?

Is it coddling people when I try to address systemic sexism? There’s an issue that affects a lot of people, and, at least in activist communities, it is not considered “coddling” to try and prevent sexist rhetoric from going unnoticed. While it’s true that some will try and say that we should just “let it go” and stop “worrying” about sexism, that’s a rhetoric that’s prominent outside of activist communities. Why is it that inside of them, though, this debate about trigger warnings continues to happen?

If we can do one small thing, one thing that’s not enough but is something, one act of kindness, one act of recognition, of allyship, then it’s clear to me that we should.

Trigger warnings are meant to be warnings for people who experience “trauma triggers,” or experiences that evoke painful and upsetting memories and cause distress. While triggers are varied and individual – a trigger can be a smell, a sight, a word, anything – including trigger warnings at the beginning of articles or other media can help people who experience post-traumatic stress disorder (PTSD) to either avoid or be better prepared for a potentially upsetting experience. Someone might want to avoid this for several reasons: not having enough energy, needing some space from certain topics, or in order to practice self-care.

Although designed for PTSD and trauma triggers, trigger warnings can also be useful for other people. Especially on the internet, they can be a useful guide for navigating material concerning oppressive behaviour. For example, if someone is discussing their experience with anti-queerness and they preface their post with a warning to that effect, then other queer people can make an informed decision about whether they wish to read it.

Secondly, an argument I’ve often heard against the use of trigger warnings goes something like this: “In the real world, no one is going to shield you from harmful content.” This argument implies that if it happens in the “real world,” then we shouldn’t avoid doing it in feminist spaces.

When you refuse to issue trigger warnings, you’re not “helping people learn to cope,” no matter how attached you are to that argument.

The main problem with this line of thought is that it’s hypocritical. There are a lot of problematic things that happen in the real world, and we still recognize that they’re a problem that we especially want to combat in feminist spaces. Take anti-queerness as an example again. When anti-queer behaviours or ideas are displayed within our circles, we recognize that this is not acceptable and that we need to change it. By making our spaces safer, we are making a part of the real world safer – the fact that oppression happens elsewhere doesn’t mean we should accept when it happens here.

In the same way, the fact that trigger warnings are generally uncommon doesn’t mean that we shouldn’t try to incorporate trigger warnings into our media presence. Many members of activist communities experience marginalization of some kind, and have furthermore experienced trauma in relation to those experiences. We must acknowledge that trauma exists in our communities, that we are aware of the different relationships people have to their trauma, and that we respect individuals making decisions for themselves about what kind of content they engage with.

This brings me into my third point. What perplexes me about this whole debate is why people would be so concerned with others’ choices about the content they engage with. Consider an analogy: should we stop making article titles relevant to their content, since this allows people to avoid reading content they are not interested in? Of course not. Trigger warnings, however, are targeted on similar grounds.

This is an instance of ableism toward those who suffer from PTSD or other trauma-related mental health issues. One of the particular characteristics of ableism is that it is often cloaked in concern for others’ well-being. A severe example of this kind of justification has been used to promote the forced sterilization of intellectually disabled people, by framing this as protection from pregnancy, in particular in case of sexual assault. There is a number of things wrong with this – for instance, why aren’t we aiming to prevent the sexual assault instead of the pregnancy of disabled people? – but it’s clearly part of a larger project to control disabled bodies, disempower disabled people, and remove their agency, and all this is done under the guise of “protecting” them.

When you refuse to issue trigger warnings, you’re not “helping people learn to cope,” no matter how attached you are to that argument. You simply don’t think it’s valuable to make content accessible to people with various relationships to mental health, or you don’t want to take the time to do so. But it’s not up to you to decide how someone engages with media, or with their mental health.

Trauma triggers are unique and individual, and we will probably never be able to issue trigger warnings in a way that accommodates every person who experiences triggers. In no way, however, does this mean that we should ever stop trying. The impossibility of perfection is no reason not to try to act in solidarity.

Lucie Lastinger is a U2 Women’s Studies and Anthropology student. They can be reached at lucile.lastinger@mail.mcgill.ca.